The call, made via a blog post, reads in full:

The Oculus Rift offers exciting possibilities for Second Life – the stereoscopic virtual reality headset brings a new level of immersion to our 3D world, making Second Life a more compelling experience than ever before.

Though a consumer version of the headset isn’t available yet, we’ve been working with the development kit to integrate the Oculus Rift with the Second Life Viewer. We now have a Viewer ready for beta testers, and if you have an Oculus Rift headset, we’d love to get your feedback.

If you have the Oculus Rift development hardware and would like to help us with feedback on the Viewer integration, please write to sl_oculus_beta@lindenlab.com to apply for the limited beta.

As noted in the post, the headset isn’t commercially available as yet, but the pre-release version with the Oculus Software Development Kit is currently available for $300.00 directly from Oculus VR themselves. If you have a kit already, now is the time to sign-up!

As I reported in December, VoidPointer Linden had indicated that the work on making the viewer operate with the Oculus Rift headset was “feature complete”. This fuelled an expectation that a project viewer might make an appearance either before, or soon after Christmas, 2013.

However, Oz Linden shortly afterwards indicated the “soon” might be something of a relative term. Since both of those announcements, the Rift viewer has been working its way through the Lab’s QA process, and while it didn’t appear as quickly as perhaps VoidPointer had hoped. Even so, when commenting on the status of the viewer back in December, he was able to confirm a few things about it:

Elsewhere, it had been indicated that when in “Rift Look”, UI menus may float over the user’s head, keeping them out of the field of view until such time as needed. This was certainly the case when Simon Linden tried the viewer earlier in “013, but it is unclear if this approach has been carried forward – so that’s one for the beta testers to discover.

There is no timescale for how long the beta testing will last, but this announcement brings official support for Occulus Rift (users can also use David Rowe’s CtrlAltStudio viewer, which provides preliminary support for the headset) a step closer to reality.

I was fortunate enough to be tipped the wink about LennonParkOnTheRock, a full region held by Darth Kline, which he has developed into the most incredible parkland for visitors to enjoy.

A beautiful forested parcel in a private and exclusive Island. Lennon Park on the Rock is intended to be a sanctuary, the ideal place  for you to enjoy your second life.

My home and my place of solitude. come for a visit, stay a while. 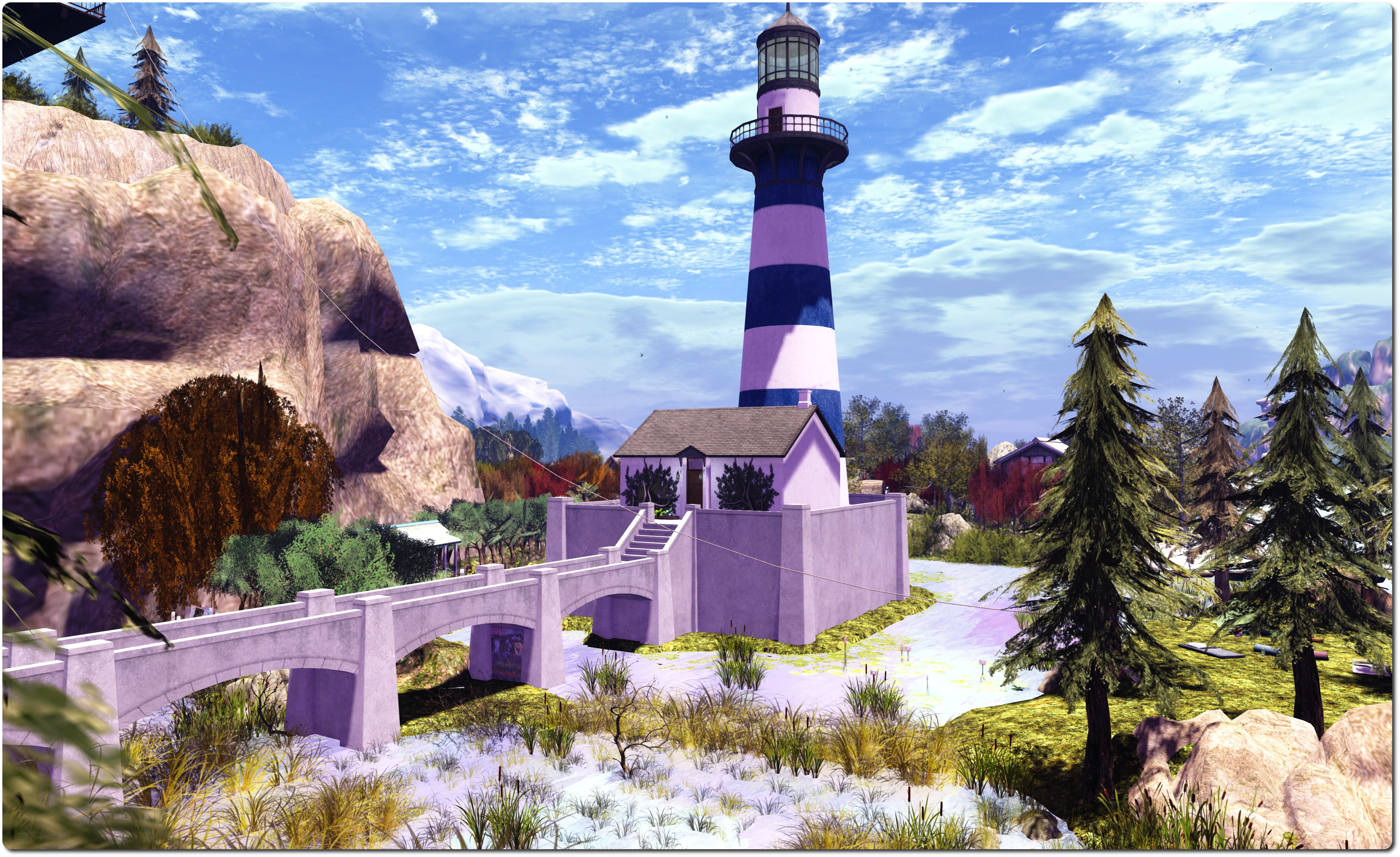 “Stay for a while.” That’s a wonderful invitation, and likely anyone visiting the region will want to do. Here is a place to wander, sit, relax, share time with a friend or two, explore or simply forget the worries of whichever world happen to be on your mind.

It’s very easy to slip into hyperbole when describing a region in Second Life, but this is one that really is visually stunning in design and execution, and packs a heck of a lot into it without ever feeling overcrowded or losing what is an entirely natural look and feel.

From the arrival point alongside what appears to be a venue for live music, you can wander along the trails and paths around the region, from the diner up to the lookout tower on the plateau overlooking the region, or down to the coastal areas, waterways and the beach. Along the way, there’s a lot to discover and see, and more than enough to keep the SL photographer snapping away left and right.

The attention to detail here is fabulous, be it in the way the footpath, stone walls and the sim itself have been carefully blended to provide a lovely route up to what might be little holiday chalets overlooking the stone bridge leading to the lighthouse, or in the way the region has been given a feeling of use and history, through the inclusion of an old car wreck, a faded sign here and there and with some of the buildings looking is if they could use a little TLC. 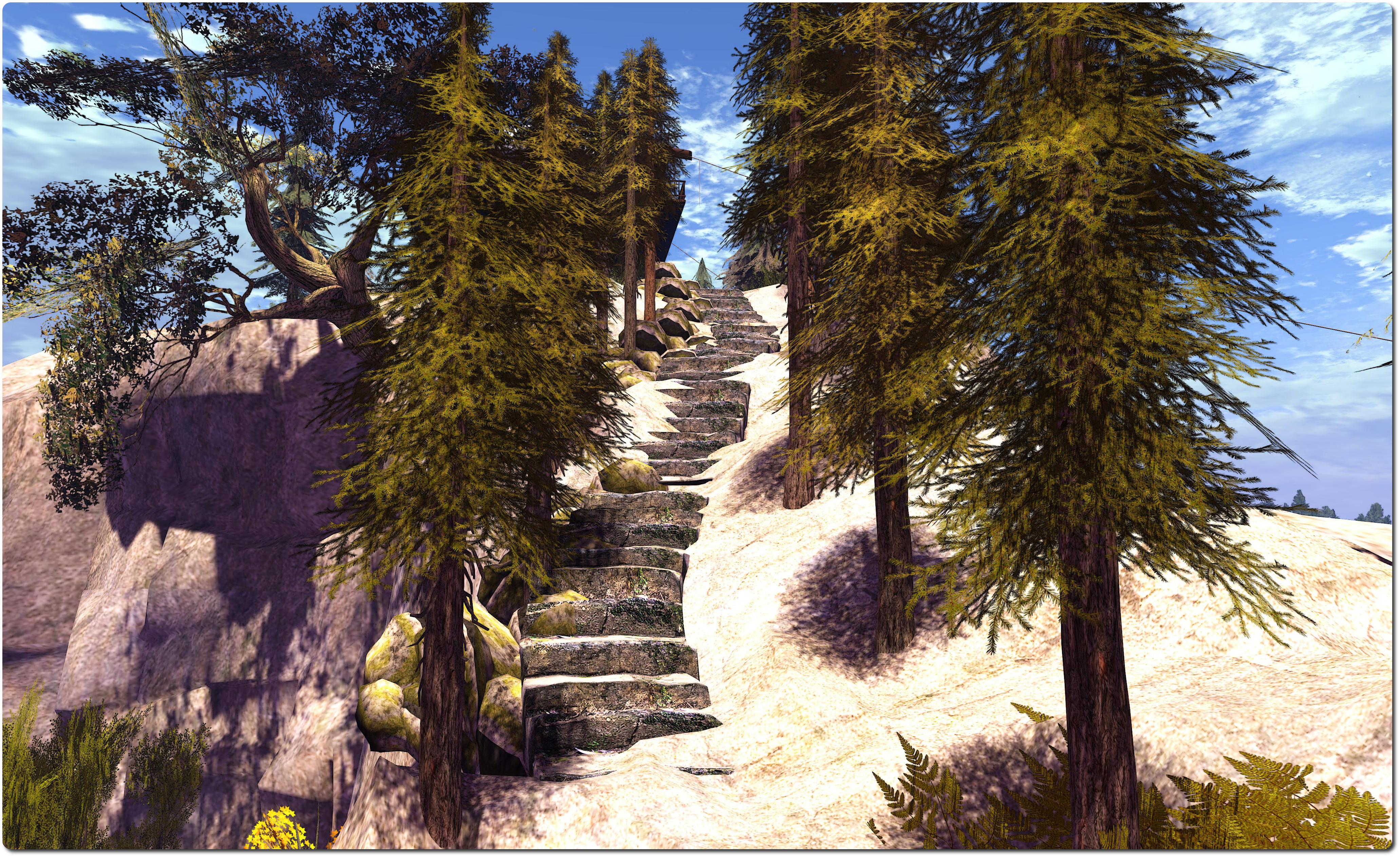 This is a place to be explored, rather than described; words alone cannot really do it justice. Not only is this because of the scenery or the fact that there are a fair few things to do around the region (including riding a number of rope slides for the daring), but also because there are little stories waiting in the various scenes which unfold as you explore, which demand stories of their own. Take the rusting wreckage of an old fighter plane lying half-submerged in a small lake, for example. Clearly there is a history to how it came to be there, but what is its tale? That’s for you to decide.

One thing to keep in mind should you visit is that the region has an adjoining homestead. While this enhances the look and feel of LennonParkOnTheRock by presenting a series of offshore islands, it also appears designed as a residential area, so do please be aware of people’s preference for privacy, just n case there are folk living there.

I’ve little doubt this is a place to which I’ll be returning as time allows and for as long as it remains open to public enjoyment.

As always, please refer to the server deployment thread in the forums for the latest updates / changes.

On Tuesday March 11th, the Main channel was updated with the server maintenance project deployed the BlueSteel and LeTigre channels  in week 10. This contains the following bug fixes:

A question in the forum thread following the week 10 deployments  about the nature of the fix for “bug in which certain objects had incorrect status when crossing between regions” was responded to by Maestro Linden, who explained the fix was limited to what appears to be a single-case issue.

On Wednesday March 12th, BlueSteel and LeTigre should join Magnum in having support for a new version of the inventory service, AISv3, enabled.  This service requires the use of the Project Sunshine RC viewer.

Otherwise, all other viewers remain as listed in my Current Viewer Releases page.

Baker Linden is working to fix issues which were picked-up on during some initial public testing of the Group Ban functionality on Aditi during the Server Beta User group meeting on Thursday March 6th. Those issues already identified with the viewer code can be found here.

Allowing for further testing and scheduling, the current plan is to have the server-side elements of the Group Ban functionality deployed across Agni prior to the viewer code being released in an RC viewer.

Until that happens, the viewer code will either remain as a direct download or may filter into a project viewer at some point once the server code is ready to start being deployed on Agni (there is currently no date as to when this will be).

Currently, the development viewer is available for Windows or Mac OSX or Linux, but the group ban functions will only work on the Aditi test regions such as in Morris (at the Server Beta UG meeting area).

JIRA: Old BUG issues Can be Made Visible

The re-opening of the JIRA occurred in week 10, and at the time, only BUG issues raised after the re-opening would be available to public scrutiny. However, it now appears as if reporters have the option of re-opening their old issues to public viewing if they so wish. Callak Skytower, for example, has made BUG-4427 publicly viewable once more.

An issue with group roles was raised at the Simulator User Group meeting on Tuesday March 11th. If a member of a group is assigned a new / additional role, the update occurs server-side, and is reflected in the Group floater for the owner / officer (or whoever is empowered to grant roles), but the change is not reflected in the Group floater of the person who has been granted the new / additional role until such it as they either re-log or are sent a re-invitation to join the group.

This has not been a cause of major concern, possibly because there is little in the way of role re-assignments occurring in groups on a daily basis. It is not currently clear as to whether the matter will be addressed, although there was general agreement that updates to role assignments should require something like a relog in order to be seen in the Group floater.

My thanks to mona Eberhardt and Rex Cronin for the meeting transcripts.