The appearance of the account prompted a question on its legitimacy from Strawberry Singh (among others), which in turn prompted an immediate and unequivocal response from Linden Lab: 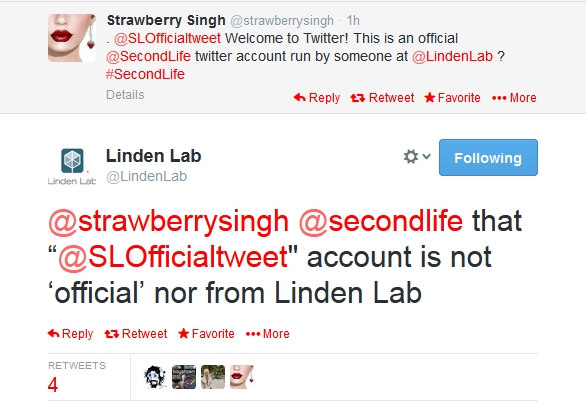 Peter Grey, the Lab’s Director of Global Communications further underlined the unofficial nature of the account in an e-mail to me, stating:

That account is NOT official, nor from Linden Lab. It was first brought to our attention this morning, and we’ve been replying to queries on Twitter about it to confirm it’s not legit.

The account doesn’t appear to be a phishing attempt – the link included in the account header seems to refer to the official secondlife.com website. However, as it stands, it is likely that this account could be blocked / removed by Twitter as it would appear to be a pretty clear attempt at brand impersonation and trademark misuse.

Parody accounts, unaffiliated accounts, etc., are not new on Twitter. However, many of these do carry an indication that they are not in any way official. Twitter also have an account verification process for those accounts that might be subject to impersonation in order to further help prevent issues of misrepresentation. Given the extent to which the Lab uses Twitter, having their own official account verified might help discourage this particular prank from being repeated in future.

While only launched on Wednesday March 5th, OnLive’s new SL Go offering for accessing Second Life from Android devices, low-end computers and TVs (additional hardware required) has already received a lot of kick-back due to its initial pricing model.

As it stands, OnLive, in something of a departure from their normal pricing models, are initially presenting the service on a pay-as-you-go offering starting at $3.00 for an hour in SL (with an initial 20-minute free trial period for new sign-ups), through $8.00 for up to three hours access, to $25.00 for up to ten hours. This is being seen as prohibitively expensive for using Second Life.

But is that really the case? Ultimately, the answer to this is both yes and no.

On the one hand, SL Go is being presented as an adjunct – not a replacement – to people’s “normal” means of accessing Second Life; something to be used to get in-world when access via home computer and local viewer isn’t an option. This was very much underlined by Nate Barsetti,  the Senior Manager of Customer Relations at OnLive, and Don Laabs, Linden Lab’s Senior Director of Product with overall responsibility for Second Life, emphasised when both appeared on a Designing Worlds special presentation shown a few hours after the launch of the service.

In such instances, a pay-as-you-go option is actually valid, as it potentially offers a better means of managing costs than something like a subscription payment system, such as OnLive’s new $14.99-a-month CloudLift subscription service, which was also launched on March 5th alongside their new OnLive Go service (of which SL Go is actually a part)..

For example, someone who find they need to access SL for, say, 4 hours a month when they are away from their home PC and viewer would have to pay a maximum of $31.00 a quarter in order to do so. But if SL Go were pitched at the same price as CloudLift, then their cost for the same 3-month period would be $44.97.

Of course, how far the pay-as-you-go payment plan remains attractive is on something of a sliding scale, and a tipping-point can easily be reached. There’s also the fact that were SL to be “rolled into” something like CloudLift, then it becomes more attractive on a subscription service as users gain access to it and other titles provided by CloudLift should they wish to make use of them. But that doesn’t negate the fact that there are genuine use-cases where pay-as-you go is potentially far more cost-effective, and therefore attractive, than a flat subscription rate.

On the other hand, however, SL Go has been presented as a means of accessing the full richness of SL on computers otherwise incapable of doing so. This suggests that SL Go could be used as a more general means of using SL than those on such low-end machines can currently enjoy – and as such, it is where the pay-as-you-go option falls flat on its face, and an alternative means of paying for the service to be used in this way is required, such as a subscription model. And OnLive aren’t actually blind to this fact.