On Saturday March 1st, members of the Second Life Bar Association (SLBA) – real-life attorneys – sat down at the SLBA’s auditorium to discuss matters relating to copyright and fair use as they apply to US law and might impact content creators in Second Life.

In attendance were Agenda Faromet, who in real life is an attorney specialising in privacy and internet law operating out of San Francisco and Tim Faith (SL: Yoss Kamachi), a Maryland attorney with a strong background in IT and who deals with matters related to copyright, IP, trademark, etc.

In all, the session lasted just under 90 minutes, with initial presentations by Tim and Agenda, followed by joint coverage of a number of fair use cases in the US, prior to an open Q&A session.  An audio recording was made of the meeting, but suffered somewhat from microphones being overdriven.

What follows, is a transcript of that recording, which has been cleaned-up as far as possible, with unnecessary background noises, echoes, and pauses / repetitions edited out. For ease of reference, the transcript and audio have been divided into four sections: 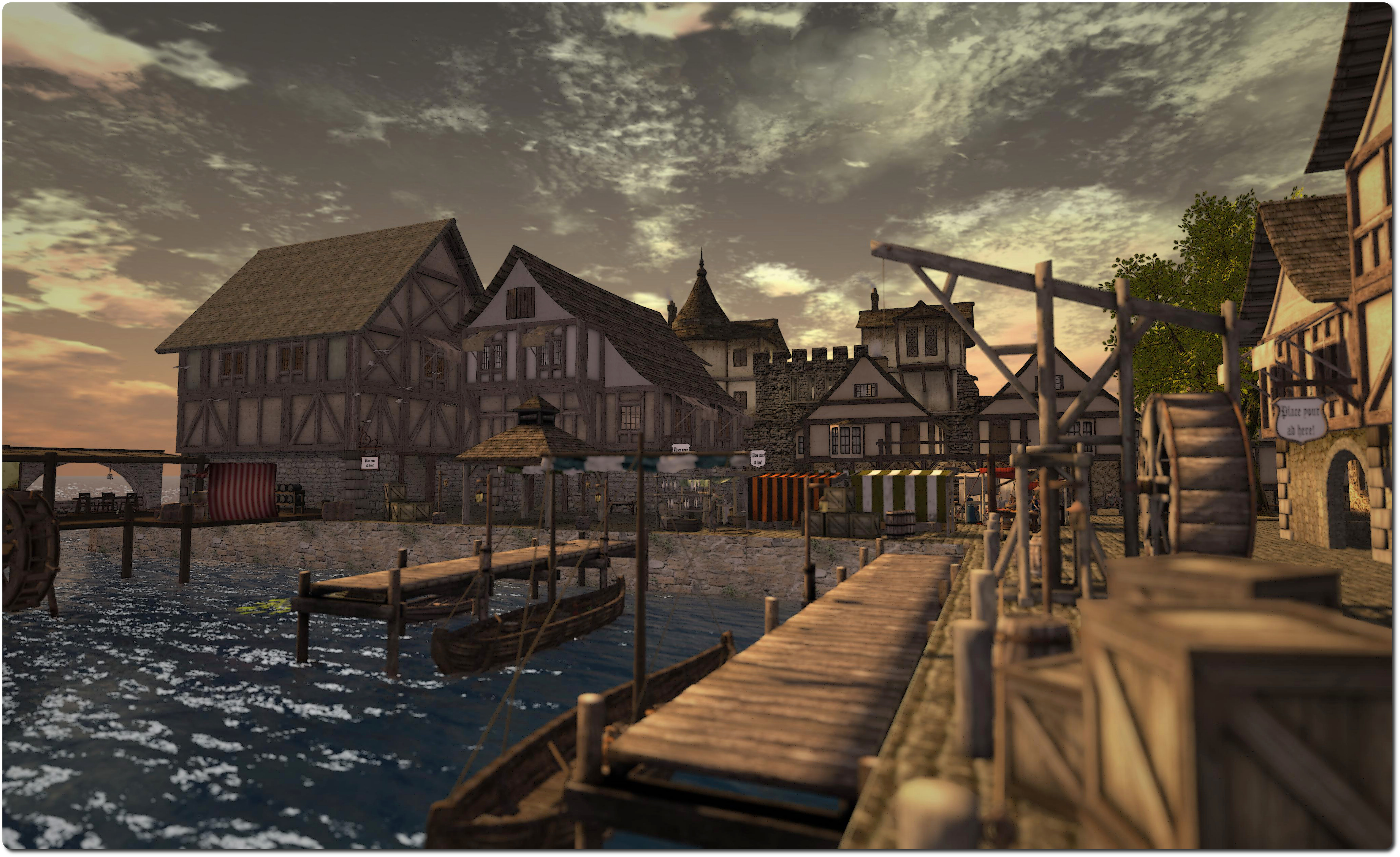 Caelestivm occupies the full region of Palau, and belongs to the Lockhart family (Erwin Lockhart, Lord of Caelstivm and Sathiam Lockhart, Lady of Caelestivm, whom I had the pleasure of meeting when visiting the region). It offers a mixture of “Medieval light RP (English, Francais, Deutsh, Dutch, Italiano) Fantasy, Celtic weddings, Riding, Jousting” and rental opportunities for those so interested (contact the Lord of Lady of the land for details). It’s a new undertaking, so new, I understand the official opening is scheduled for the weekend of the 22nd-23rd March.

And I have to say, it’s an interesting mix, one SL photographers and those looking for an special backdrop for a photo shoot may well find worth a visit (although again, if thinking on using Caelestivm for a photo shoot, please contact the Lord or Lady of the estate first!). 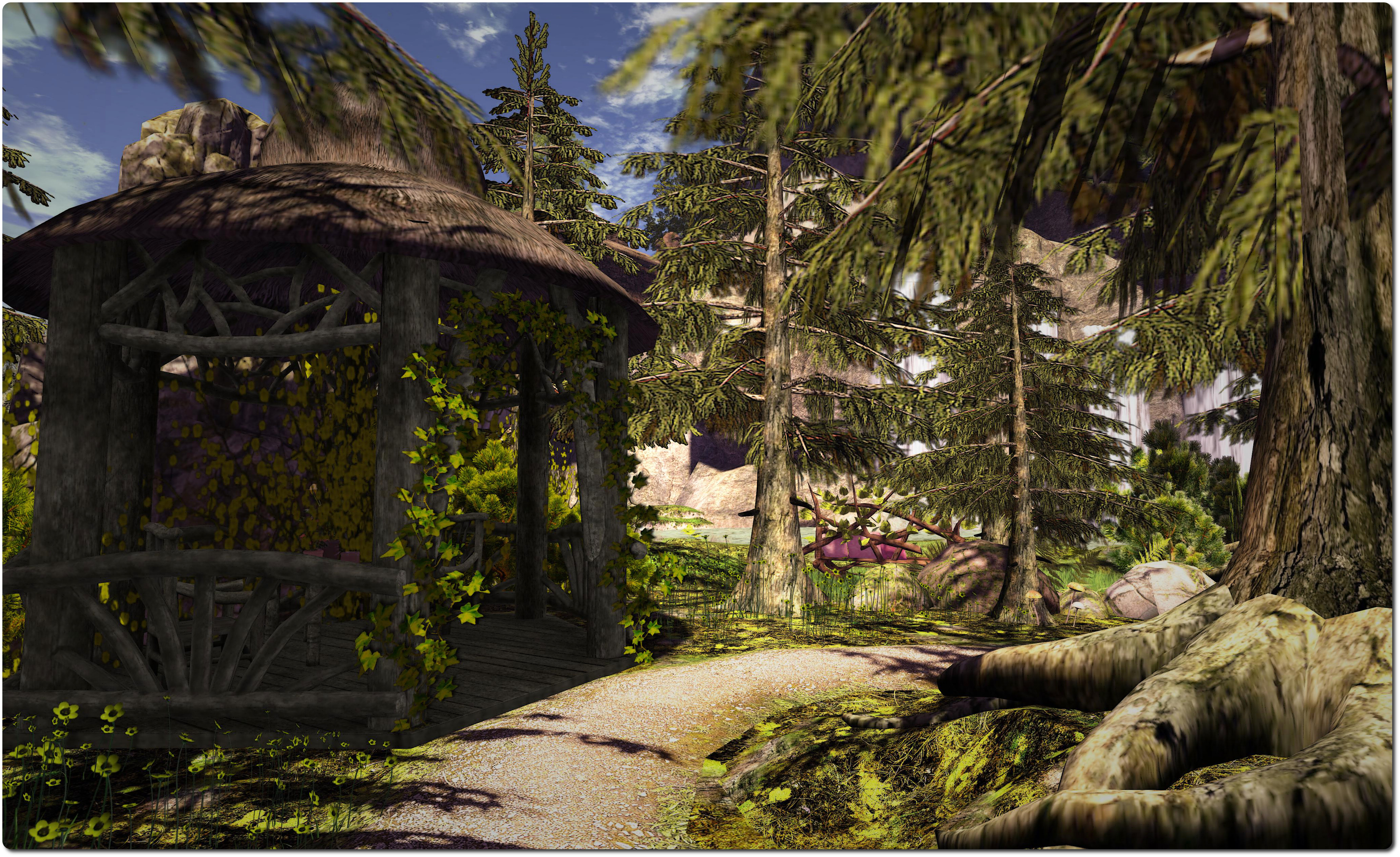 This is something of a region of two halves in some respects, although everything flows together to form a whole. On the one hand, there is a very period setting for the region – medieval times, as indicated by the About Land notes – with visitors arriving in a very atmospheric port area. The attention to detail here is immediately apparent. Do have local sounds turned on when you arrive in order to enjoy the atmosphere of the place and take your time looking around; there are some lovely touches, including a hint as to the fantasy nature of the region, out in the harbour…

Beyond the port town lies more rural countryside, in places wooded, in others open for grazing  or rutted by well-worn cart tracks. Watermills slosh the water of a broad river spanned by stone bridges, washing is set out to dry on the river bank, and in a cleared field lay the lists and berfrois for jousting tournaments. 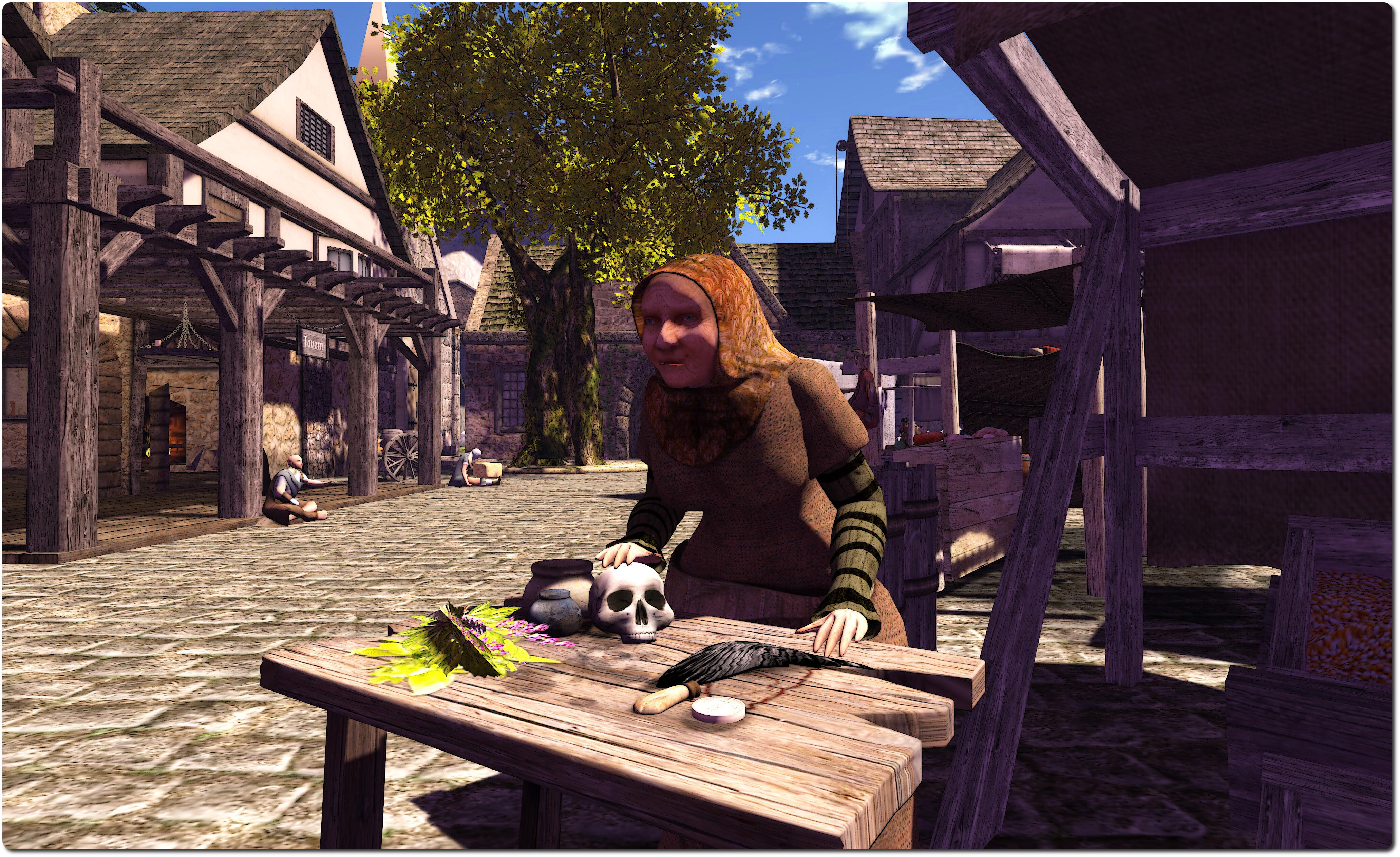 Slightly further afield, the countryside rises and takes on a more fantasy feel to it. Trees houses (one of them under the tree it’s built against, rather than up in the branches) can be found here, while up on a high plateau sits the Lord and Lady’s grand manor house, with smaller buildings parched on the lower reaches of the plateau, wooden walks linking them and a bridge leading to an ancient stone circle, Celtic in origin, and which appears to be the site for wedding (and other?) ceremonies.

Ruins down in the woodlands below also add to both the fantasy element of the region and its historical setting, again drawing them together. Are they the remains of an old medieval structure – an abbey, perhaps? Or are they even older still, the remnants of an elder race? Elsewhere standing stones and what appear to be ancient statues hewn from living stone add further depth to the region’s mixed history. 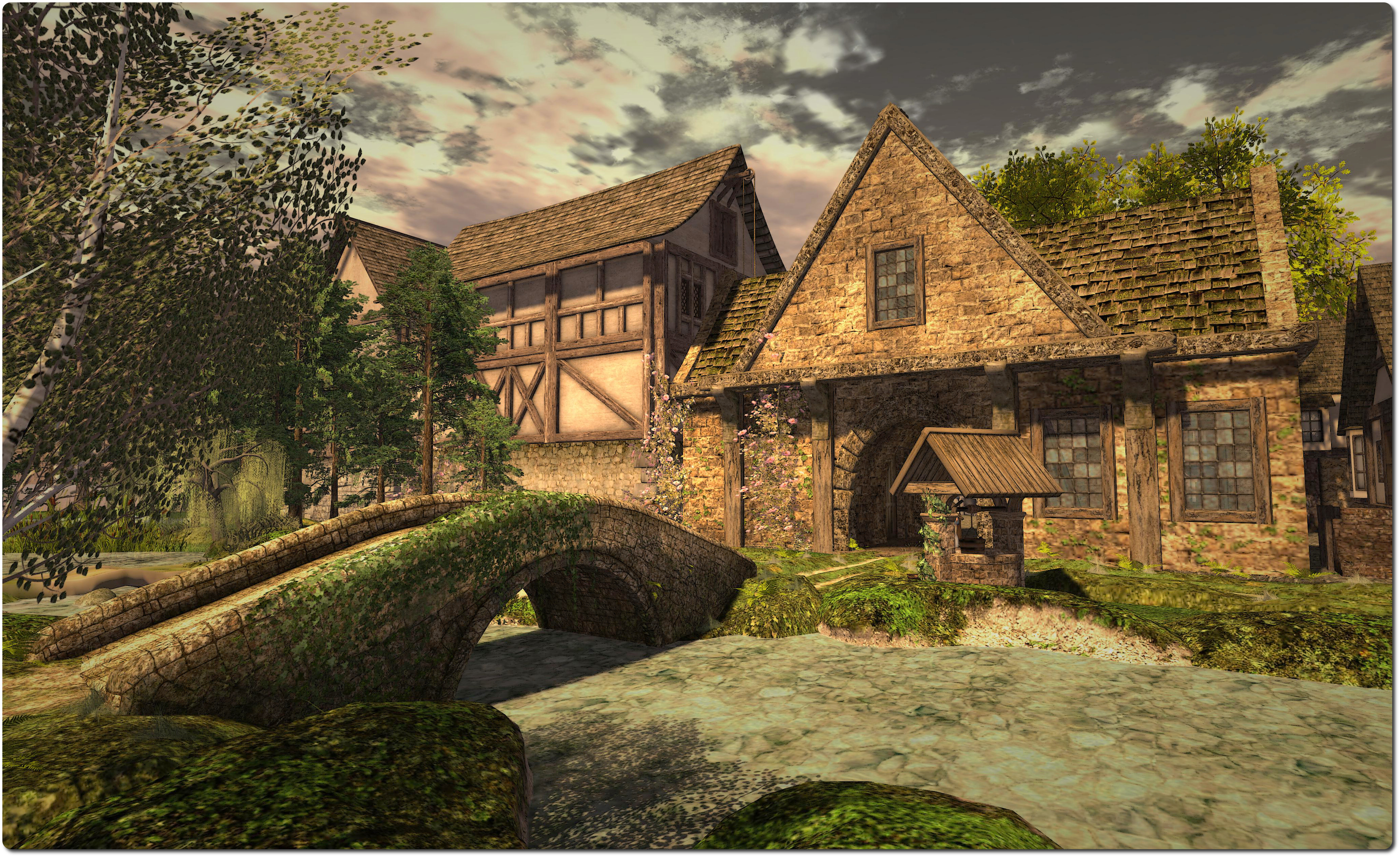 At the time I visited, Lord Lockhart was still working on the layout and refining things – so it is possible that some of the details seen in some of my shots here and on Flickr may well have changed since my visits. However, the overall look and feel should be pretty much as shown here.

In terms of role-play, the emphasis is very much on “light”, as Lady Lockhart explained to me during my visit, “We don’t want a true RP with rules and hierarchy and story, we want to let people live as they want, so long  as they follow the dress code.” Certainly, there is more than enough here to encourage a range of role-play, and the overall design does mean that individual activities needn’t get in the way of one another. 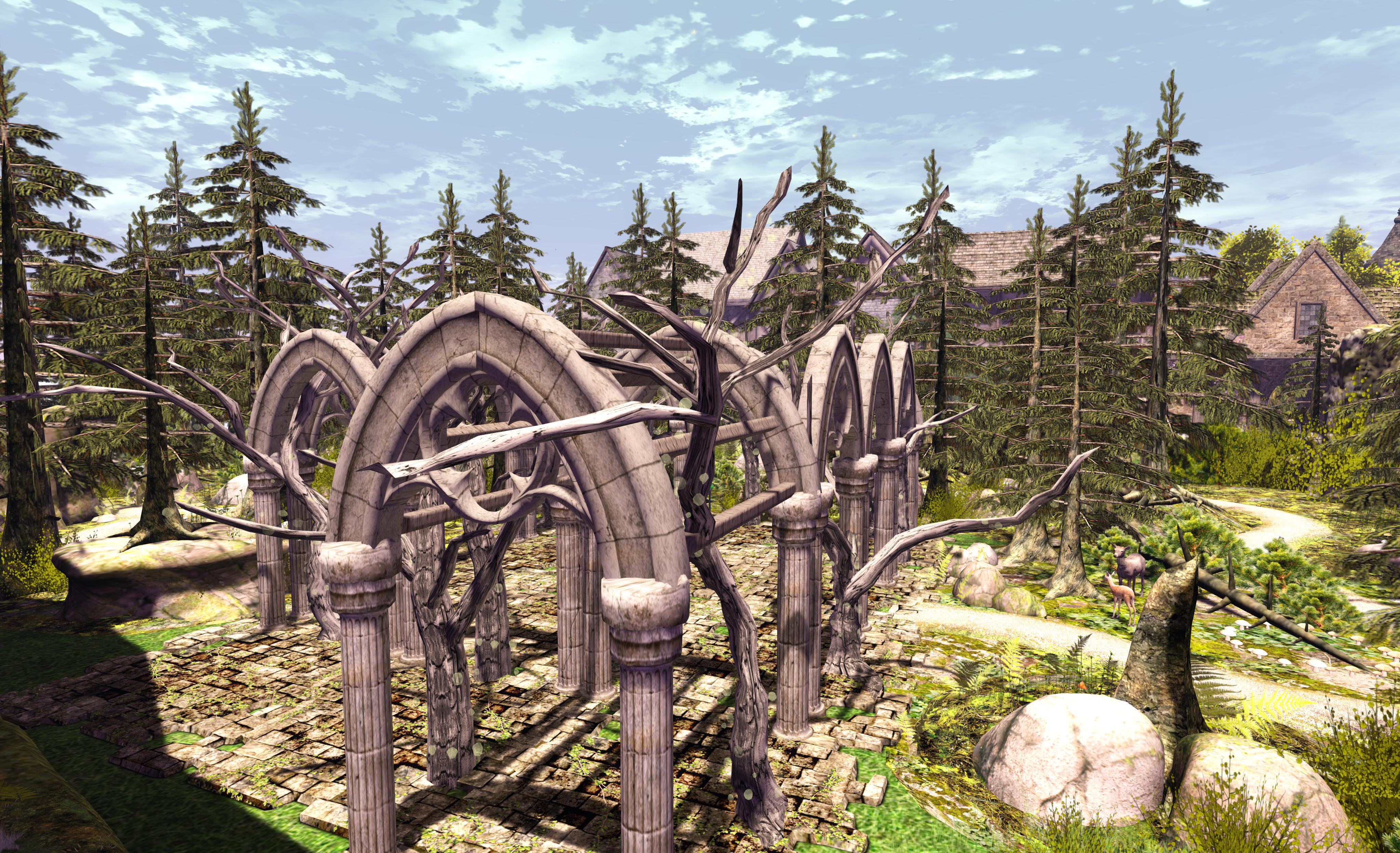