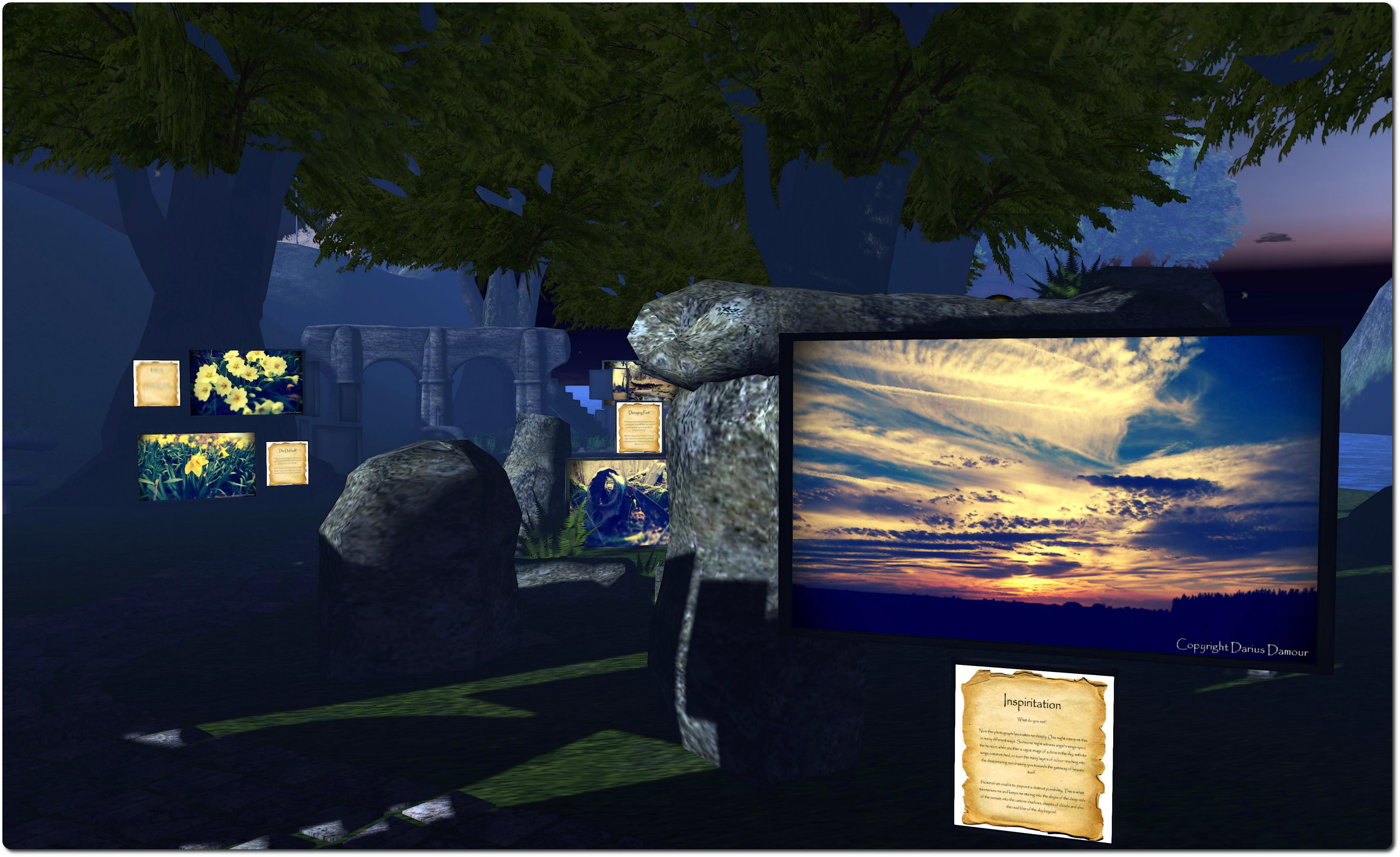 I happened upon Surreal Effects quite by chance while poking at the Destination Guide.  This is the home for the gallery of Darius Damour (also known in-world as Raemus Nightfire), and offers visitors the opportunity to see (and buy, if they wish), his real-life photography reproduced in-world in a size suitable for viewing and for gracing any home, and to also enjoy some of his poetry while embarked on an elven boat ride around the edge of the region.

From the arrival point, a cobbled path winds its way across an ethereal landscape, lit by a huge Moon and featuring standing stones, stone arches and giant fungi. Following the path will lead the visitor to little groups of Darius’ photography, displayed two or three pieces at a time, each piece framed and  accompanied by notes from the artist.

To say Darius’ photography is evocative would perhaps be an understatement. Each piece is a marvellous study – and I quite envy him his eye. The liner notes provide added depth to each piece, forming a window into the artist’s mind, allowing us to share both his feelings towards the pieces offered on display and a glimpse of the creative stirrings behind them.

The path eventually leads to a small dock where the visitor can continue their journey via elven boat, travelling around the island and passing a number of pieces of Darius’ poetry. These are framed and set against displays made up of one or more sculptures and other pieces from a number of different SL artists, which serve to illustrate each poem. Again, many of these are deeply evocative – I was particularly drawn to Asleep. Some are interactive, as with What has happened to human Kind? While one –  Alone – is somewhat darker in tone compared to the others, literally as well as figuratively… 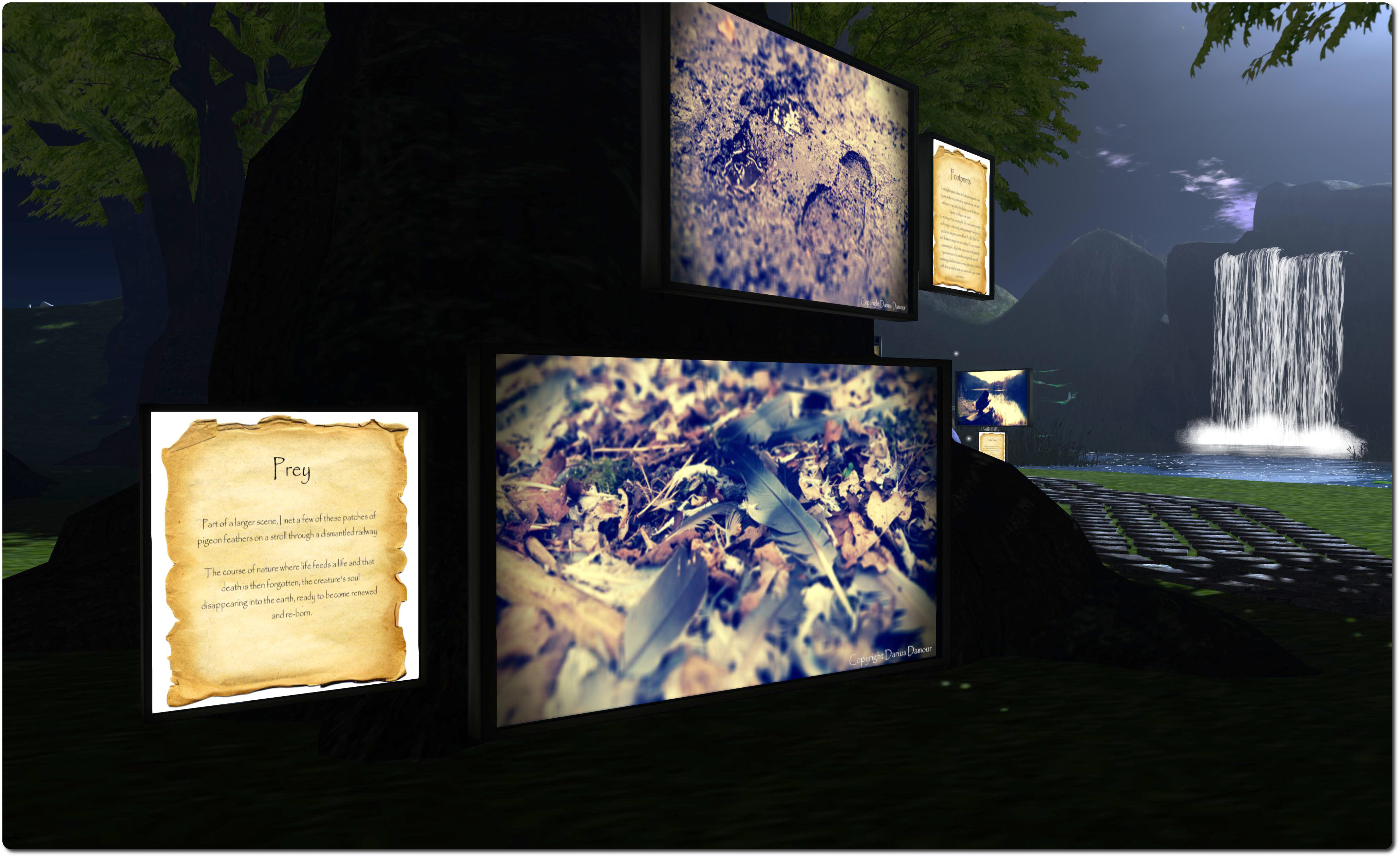 If any of the poems strike a chord with you, do please note that they are also on sale as framed pieces in the Poetry Shop, which can be found in the tree house on the small island across from the boat ride dock.

On Sunday March 16th at 13:00 SLT, the latest addition to the gallery opens. Wisdom’s Fortress is another interactive piece, which I personally think is beautifully conceived and executed, and the starting point for which lies alongside the elven boat dock. 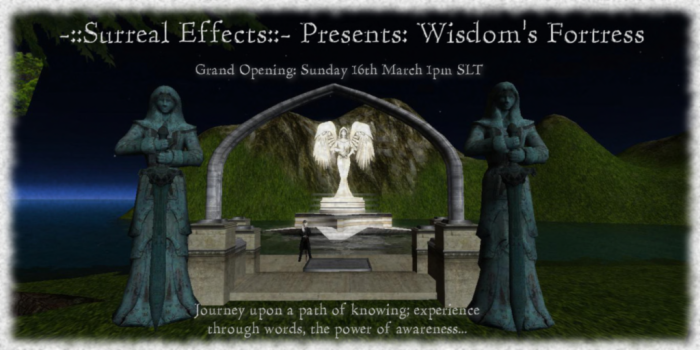 “It is centred more around my writing, and set up in such a way of an ascension towards awareness, knowledge and wisdom,” Darius informed me when discussing the new piece. “It features quotes and poetry by myself – in both a journey and philosophical level.”

The ascension element of the new piece is quite literal – and somewhat magical. I don’t want to say too much about it, as that would spoil it, but I will say it involves a crystal stairway leading the way up to an island floating in the sky. 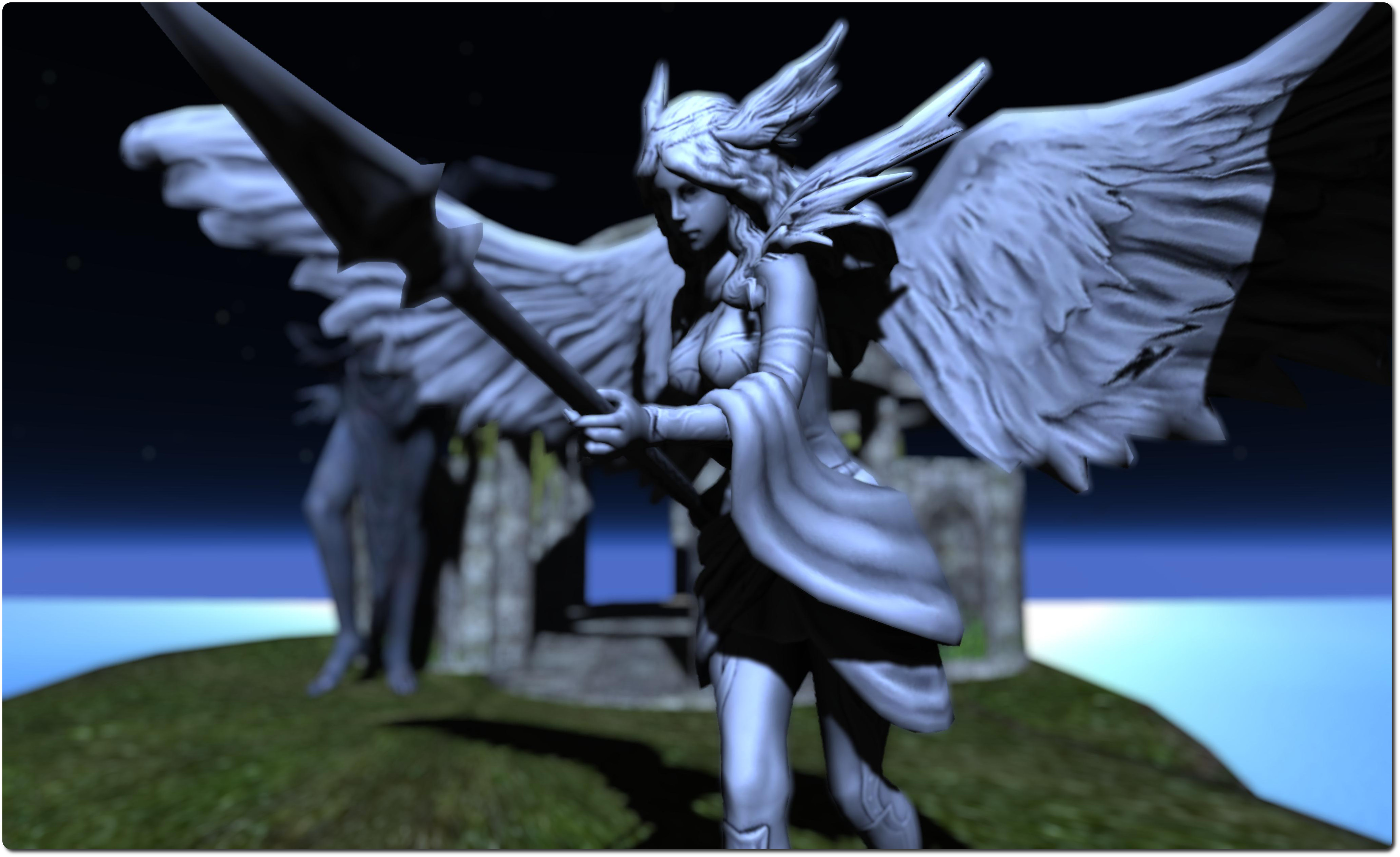 The opening of Wisdom’s Fortress will include a raffle in which winners can select a favourite quote or poem from the exhibit as their prize.

When visiting the region, I do recommend using the default windlight for the perfect atmosphere (there is also a music stream available as well, should you choose to enable audio streaming).

As well as the gallery, the region offers places to hang-out (one up on a balloon floating over the region which is reached via a rope climb), and is also the home of the Anime-related Oktaku Paradise, reached via a teleport near the arrival point. As this requires all visitors to appear as an Anime-related avatar, and I don’t have anything remotely appropriate, I didn’t pay it a visit. However, should you , do read the Sim Code alongside the teleporter.

I regard Darius’ gallery as a real find. I’m already mulling over a couple of the pieces I’ve seen on display, and need to see how well I can reshuffle things at home in order for them to fit. If you enjoy evocative poetry and photography, this is most definitely a place to add to your list of galleries to visit. highly recommended. 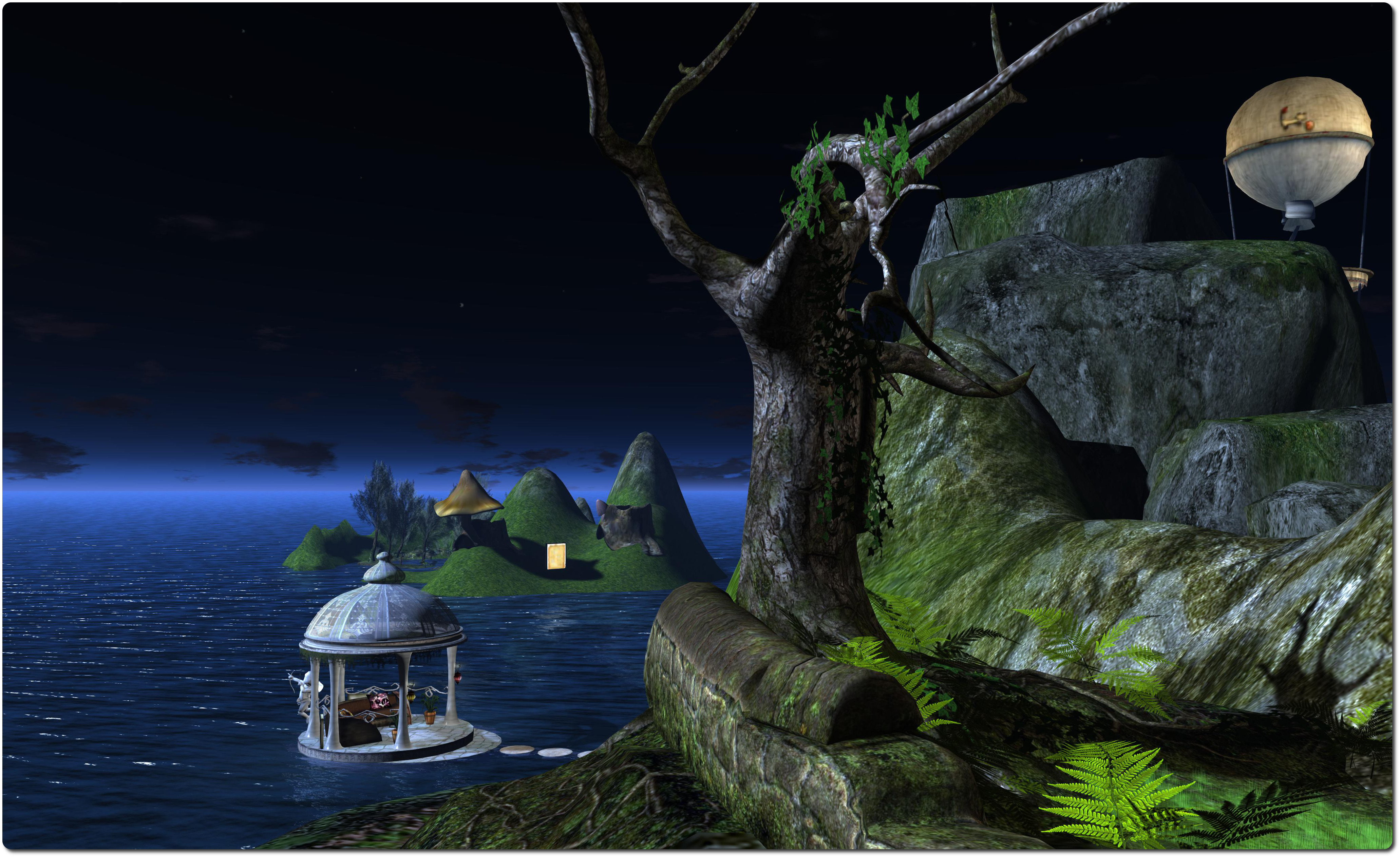 In this episode, Sherlock Holmes steps back from the spotlight as he dispatches John Watson to Lausanne, Switzerland, to investigate The Disappearance of Lady Frances Carfax.

Unwed, and denied what should be wealthy inheritance, Lady Fairfax is given to writing to her former governess every other week, wherever she may be – but for five weeks, nary a letter has been received, and fearing for her safety, the governess has contacted Sherlock Holmes.

Thus the good doctor is faced with a series of riddles to solve: where did Lady Carfax go? Who was the bearded man and is he somehow involved in her disappearance? Why did she pay her maid so handsome a sum? And where did the maid go after leaving her employ? 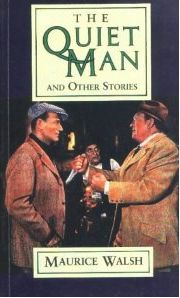 Released in 1952, John Ford’s The Quiet Man is regarded as a classic Irish-American romantic comedy / drama. Starring John Wayne, Maureen O’Hara (and assorted members of their RL families!) and Barry Fitzgerald, it is a popular choice among critics and film-lovers.

The screenplay for the film was drawn in a large part from a short story of the same name originally published in 1933 in the Saturday Evening Post, and penned by Irish author, Maurice Welsh. Together with a number of other short stories by Walsh, The Quiet Man was gathered into a single volume of his short stories, The Quiet Man and Other Stories, which dealt with many recurring characters living in rural Ireland of the 1920s, and set against the backdrop of the civil unrest which affected the country at that time, while examining the complexities and occasional intrigues of life, love and Irish traditions.

Tuesday March 18th, 19:00: The Girl Who Circumnavigated Fairyland in a Ship of Her Own Making 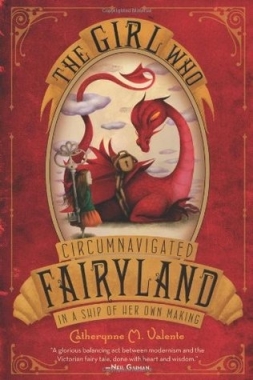 Faery Maven Pralou reads from Catherynne M. Valente’s tale about twelve-year-old September. Living in Omaha, she has a very ordinary life until her father goes to war and her mother goes. leaving her at home on her own.

One day, she is visited by a Green Wind who invites her on an adventure, implying that her help is needed in Fairyland, where the new Marquess, of about the same age as September, is unpredictable and fickle.

This Green Wind tells September that only she can retrieve a talisman the Marquess wants from the enchanted woods, and if she doesn’t, then the Marquess will make life impossible for the inhabitants of Fairyland. And so begins an extraordinary adventure, which sees September travelling through Fairyland, accompanied by a book-loving dragon, and a boy named Saturday … 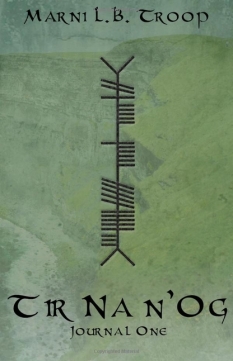 Tír na nÓg (“Land of the Young”) is, in Irish folklore and mythology, one of the names of the “otherworld”, in part a supernatural realm of everlasting youth, beauty, health, abundance and joy. It is also the title of the first volume of Marni L.B. Troop’s The Heart of Ireland Journals.

In looks, the Faerie are folk little different to humans, other than their pointed ears, although they are vastly different in other ways, and Casey is a princess among them.

She is horrified when a stranger from Iberia arrives on the shores of Ireland, home of the Faerie, believing them to be the gods of his people, but the kings of the Faerie respond to his overtures by having him slaughtered.

Thus the Faerie kings bring down the vengeance of the Iberian people upon their own folk, and war comes to their land. Caught in the middle, and herself in love with an Iberian called Amergin, Casey tries to find a way to bring peace between the two peoples so that they might live together. Unfortunately for her and her beloved, things do not go as she had hoped.

Join Caladonia as she continues reading this intriguing faerie tale.

With Dubhna Rhiadra and Aoife Lorefield

Please check with the Seanchai Library SL’s blog for updates and for additions or changes to the week’s schedule. The featured charity for March and April is Project Children: building true and lasting peace in Northern Ireland one child at a time.