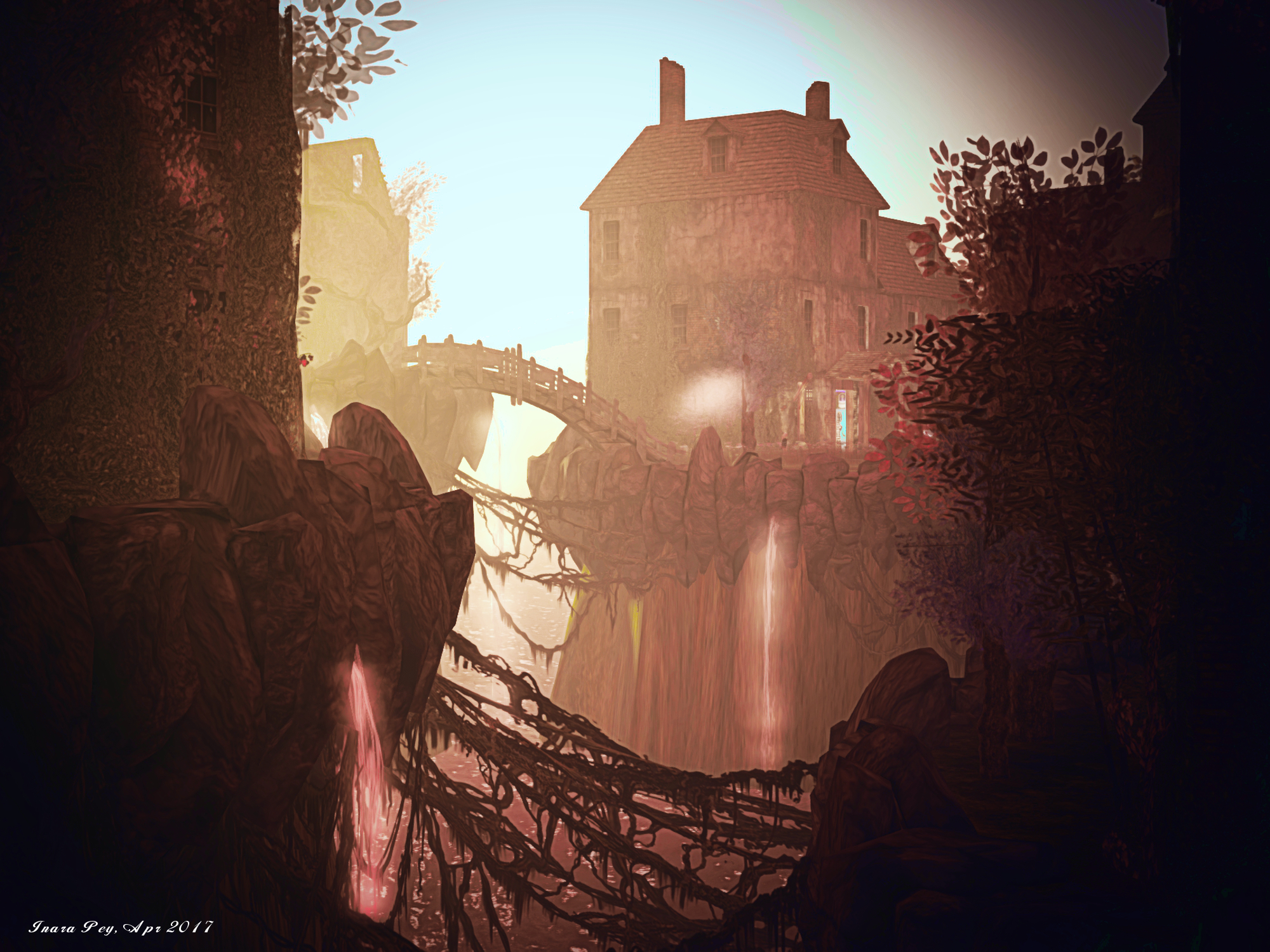 We sit between the darkness and the light; between youth and age. Ours is a place of times past and times present; where the promise of that yet to be awaits.

Ours is a world of the crumbling and of the beauty of rebirth. We are eternal. Life’s energies flow through the waters of our realm, and the gift of renewal and creation float on the breeze. Our houses speak of the Old Times, the past, and the wisdom and grace of Age. The blossoms on our trees, the blooming of our flowers speak of present time and the vitality of rebirth, the richness of Life Anew.

This realm offers all who seek it rest, respite and renewal. We ask naught in return. We do not demand adherence to rules or the invocation of arcane rights. We do not require you follow a mystic path or give obeisance to icons or gods. We ask only that you walk our grassy streets, and between the shadows of our homes and the light of the easterling Sun with open heart and mind; that you do not judge nor fret nor fear; that you simply Be.

We have been here since before others learnt to count the passing of Time; we will be here long after such counting has ceased. We will not always be visible to the world; we choose to make our presence known now, and for a brief span. But even when we can be no longer been seen, we will be here. Watching. Waiting. Our bridges will remain open to those who seek; the renewal of our waters are here for those who thirst.

Our streets, our paths our bridges, our homes. All are yours to explore. Peace as rest can be found throughout our lands, under bough, atop rock, and under dome. Drink from our waters; eat of our fruits; let our lamps light your way.

There are those in the world who look to the West, to the setting of the Sun. They see the closing of a day as a time for reflection and endings. But we look to the East and the rising of the Sun; because Dawn is the time of Beginning, the time of Promise, when things are made new, and life opens fresh and bright, like the flower opens to greet the day’s new light.

We are the people of Dawn’s Promise, and we will take your lost and aged energies of the past and make them young again, as young as when the World was new. This is our Promise, our gift to the open of heart and mind.

The meeting was live streamed / recorded by Medhue Simoni, and that video is embedded at the end of this update, my thanks to him for providing it. Timestamps in the text below will take readers directly to the relevant point in the video (in a separate tab) where topics are discussed.

This is an idea to overcome issues of animations states keyed by the server-side  llSetAnimationOverride() conflicting with one another. This problem has been particularly noticeable since the arrival of Bento, and a typical example is that an animation to flap Bento wings, if played to have natural wing movement while walking, results in a conflict with the walk animation, causing the avatar to slide along the ground.

Again, this is only an issue with the server-side animation triggers; older scripted animation overriders, such as ZHAO, which use the scripted llplayanimation function are unaffected.

[03:41] This is still under discussion at the Lab, and if anyone has specific views / ideas, they are invited to attend the CCUG meetings and discuss them.

[05:45] A question was raised (via chat) on whether it would be possible to reset the avatar skeleton via script (rather than replying on the local Reset Avatar options in the viewer), as bone offsets defined within some meshes are not resetting when the mesh is removed (see BUG-11310).

Vir indicated that having a means to do this via script may well be useful, but is unsure of where it might slot into the work priorities were it to be adopted, particularly as it would require a new server-side message for passing the update notification to all surrounding viewers.

[13:52] The above spawned a question on having the viewer automatically perform a Reset Skeleton function on entering a region. to try to also combat problems of avatars appearing deformed.

There are some cases where this might be useful. If you run an animation just once to trigger a deliberate avatar deformation, (e.g. from human to quadruped), that animation is not persistent, so if you enter another region, there is a chance other people will see you as deformed. However, trying to fix such situation through an automated skeleton reset is seen as problematic.  For example, an automatic skeleton reset by the viewer on entering a region could conflict with the receipt of animation updates intended to deform an avatar in your view so it looks correct, resulting in the avatar being unintentionally deformed (again, as in the case of an avatar which is supposed to be a quadruped appearing as a deformed biped, as the Viewer has ignored the necessary appearance information as a result of the automated reset.

The last several Content Creation User Group meetings have included discussions on two potential projects for the Lab. Neither has been as yet adopted, but are under possible consideration by the Lab, and Vir offered a recap of both.

[20:57] This is essentially taking the ability of the default avatar baking service to manage compositing and baking system layers (skins, shirts, pants, jackets, tattoos, etc), onto a default avatar, and extending it to be used on mesh avatars, potentially reducing the complexity of the latter (which have to be built up in “onion skin” layers in order to be able to handle things like tattoos, skins, make-up options, etc.), and thus making them more render-efficient.

As mentioned in previous Content Creation updates in this blog, there are some issues with doing this: the baking service would likely need to be tweaked to handle 1024×1024 textures (it currently only support up to 512×512); it does not handle materials (although this is not seen as a major issue, as it is felt among those at the CCUG meetings that the primary use of the baking service would be for compositing skins + make-up /  tattoos into a single texture for mesh application), etc.

[25:17] Animated support of object in-world could be used from a wide variety of things, from non-player characters (NPCs), which do not require a link to an active viewer / client, through to animating things like tree branches swaying in a breeze, etc.

This work has various levels of complexity associated with it, and were it to be adopted, might actually result in a series of the related projects. NPCs in particular would be an extensive project, as it would need to encapsulate a means to define what the NPCs are wearing / have attached, how to make NPCs customisable through something like the avatar shape sliders, etc.

As such, were the Lab to decide to pursue animated objects, decisions would need to be made on overall scope for the project, what might be initially tackled, what might be seen as a follow-on project, etc.

How To Encourage the Lab to Adopt Projects

[28:03] Supplemental animations, bakes on meshes and animated objects have been the three major topics of discussion within the Lab in terms of possible major projects. Until they actually get on to the Lab’s roadmap (*if* they get that far), it is not easy for specific time frames, etc., to be discussed at meetings.

However, the best way to actively encourage the Lab to continue looking into such potential projects is to attend meetings like the CCUG and discuss them. Despite using them in the past, polls aren’t seen as particularly useful, whereas direct discussion through meetings like the CCUG tend to bring a consistent set of interests / ideas / suggestion to the service.