On Saturday, April 8th, I was among a 40+ audience for Monarchs Dance Company’s special production of Amnesia for Filling the Cauldron. And I have to say from the outset – it was fantastic.

“Allow us to invite you to join us on a trip along our twisting memory lane!” Diiar Vader Shippe, lead for Monarchs stated in the promotional material for the show, “Six very different dance performances, with original builds, choreography and a wide assortment of music take you back and forwards, up and down in time. Our time. The Monarchs’ time. To a distant past and a hopefully not so distant future.

“If that is not incentive enough to join us, consider this: there will be unicorns, giant robots, girl power, magic pianos and a new spin to a classic tale…and dragons!”

And oh my, did they deliver!

I’ve seen many shows and dance performances in Second Life over the years, some of which I’ve reviewed in these pages, but Amensia was something else again. As Diiar states, six individual dances brought together into a single show. A show which  lifted-off from the world of steampunk and carried us through a marvellous “solo” dance in which two dancers offered a perfectly synchronised dance in which one was the “reflection” of the other,  mirrored in the water by which the other danced.

From here we travelled deep into the jungles and an exotic dance complete with runes and fire, before we were all felt the chills multiplin’ as were carried by Greased Lighting to a world of cars, and a rendition of You’re The One That I Want, complete with rapping.  Nor did it end there; our next destination: an exotic garden worthy of Elicio himself for an enticing dance among towering plants. 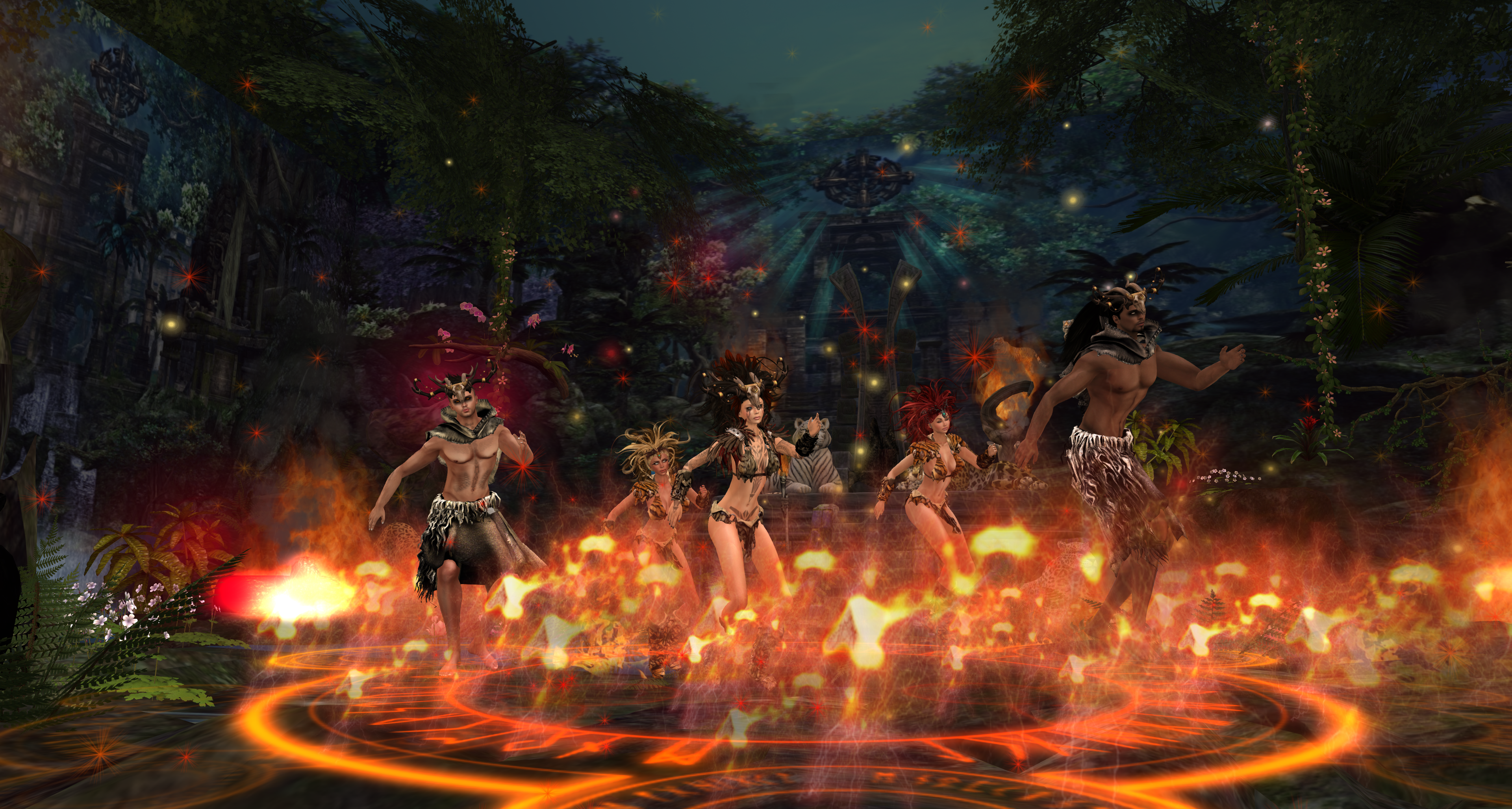 Each dance was marvellously choreographed, perfect synchronised even with an audience of 40+ people in the auditorium. Each sequence offered a unique environment and some magical touches. The mirrored dance, mentioned above, was simply breathtaking in its technical creation and the elegant beauty of its execution. The jungle dance, complete with fight scene as two warriors appeared to the via for the attention of their tribal chieftess was magical, the Grease tribute a foot-tapping treat.

But it was the final dance of the evening which delivered the must visually stunning spectacle as we were carried to the lands of Ice and Fire and the gates of a fortress echoing both Winterfell and Kings Landing, for a tremendous dance scene which carried us on a tour de force reckoning of the Games of Thrones universe – complete with the promised dragons. The latter took to the sky over the audience in a choreographed flight and a fiery climax. 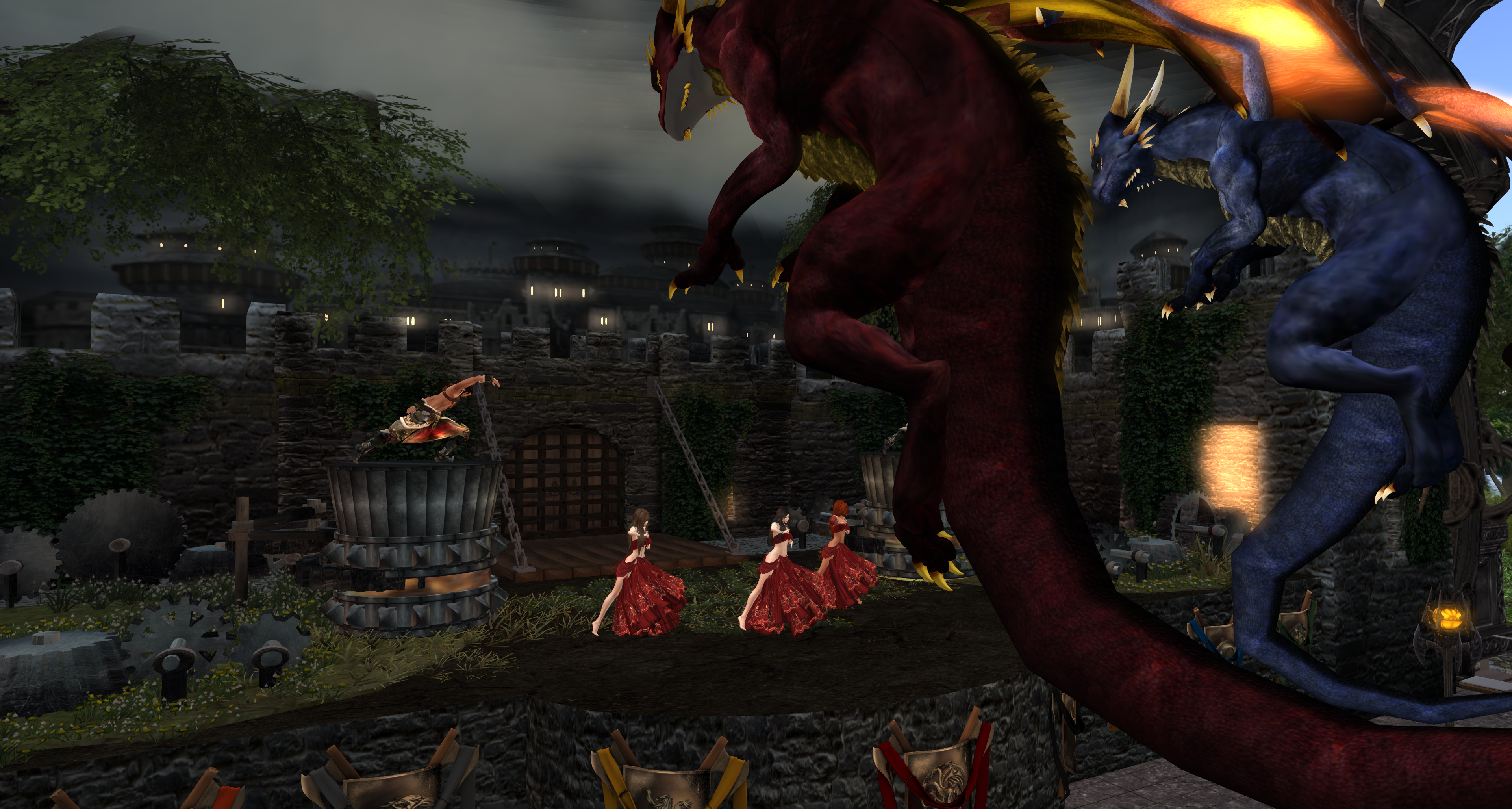 Amnesia was a stunning performance and an amazing introduction to the Monarchs and their shows, which I’ve previously (and foolishly) not had the opportunity to witness. From this show, you can certainly count me a convert – so much so that it is more than likely the Monarchs will be back at Holly Kai park in the future.

In the meantime, their next major performance will be Draco Eternum, a new show they will be unveiling at this year’s Fantasy Faire, and which Diiar describes thus:

The show tells the story of a world where dragons reigned supreme long ago. Their very existence securing peace and prosperity to the land – but now they are gone. Even in houses of learning dragons are but a myth, a legend, a story for drunken nights by the tavern fires…

Now the quest is on to discover the true secret behind the fall of the dragons and to save the kingdom before it is too late!

The show will be performed on April 21st at 15:00 at Fantasy Faire, and then daily from the 24th though 29th April. I’ll have more on the show – and on the Monarchs in an upcoming article in this blog and on the Fantasy Faire website.

With thanks to Crap Mariner for the images used in this article – see the rest on Flickr.

Caledonia Skytower and Corwyn Allen read Kenneth Grahame’s 1898 short story (turned into a film in 1941 by Walt Disney), which plays on the legend of St. George and the Dragon.

When  a dragon is discovered living in a cave on the downs near a medieval village, the most unsurprised of the village’s inhabitants is a young boy. He’d always thought the cave to be a dragon’s cave, so the news that one had been seen living there didn’t faze him at all. In fact, given a dragon did live there, it seemed only natural he should go pay it a visit.

What he finds is not entirely what he expected. Rather than being all involved in battling with knights and making a general nuisance of itself, this particular dragon has a passion for poetry and a willingness to be friend with those willing to be friendly towards it.

Problem is, the villagers are expecting a fight, demand a fight, and by golly, they’re going to make sure there is a fight; something which leaves St. George and the dragon with a bit of problem: how can they fight without actually hurting or killing one another?

Join Corwyn and Caledonia as they relate this wonderful tale at the Kultivate Magazine Spring Art Show.

Gyro Muggins concludes reading Barry B. Longyear’s novella which first appeared in a 1979 issue of Isaac Asimov’s Science Fiction Magazine, before becoming the basis of the of the 20th Century Fox film of the same name, starring Dennis Quaid and Louis Gossett, Jr. This led to Longyear producing an expanded version of the story, written with David Gerrold.

In the midst of an interstellar war between humans and Dracs (a race of humanoid reptilians), Willis Davidge, a human fighter pilot, crashes on a hostile planet after a dogfight with a Drac – who is also forced down on the same planet.

The two initially continue their hostilities towards one another. But the planet proves so hostile that Davidge and the Drac, Jeriba Shigan (whom Davidge nicknames “Jerry”), are forced to join forces in order to ensure their survival. Then Davidge learns Jeriba is pregnant – Drac being entirely asexual …

More than anything, Benjamin Ravenspell wants a pet. But when he buys a mouse named Amber, he gets more than he bargained for. No sooner does Ben take her home, than Amber turns him into a mouse too.

You see, Amber has magical abilities, and it so happens that Ben is a familiar, a creature that stores magical energy. Together they each form half of a powerful wizard. Alone, they’re just vermin.

Soon Ben and Amber find themselves pitted in an epic battle against a magical enemy who is as crazed as he is evil, and the fate of the world will rest on them learning to work together.

The featured charity for March April is Project Children, building peace in Ireland one child at a time.