As always, please refer to the week’s forum deployment thread for the latest news and updates.

The RC channel bug fix is related to vehicles getting into a “bad” state where they appear sat upon / selected even if they have lost their passengers as a result of a region crossing. When in this state, they defeat the parcel / region auto return.

As the fix for this issue is currently only on the three RC channels and will not be promoted to the main channel until 2014 due to the code freeze / no change window, and because this issue may lead to vehicles accumulating in regions where there is a lot of traffic, Maestro Linden has requested that support move any main channel regions which are affected to an RC channel.

These deployments were the last scheduled deployments for 2013. They also mark the last scheduled rolling restarts for the year as well, as there are no plans to restart any channels in either week 51 or week 52. The only exception to this will be if any major issue / fault occurs within the grid which necessitates a restart.

The next scheduled server-side deployments will take place in week 2 of 2014, the week commencing Monday January 6th, 2014.

Some information on updates which will be forthcoming in 2014 were given during the final Server Beta meeting of 2013. These include:

The “Project Interesting” (viewer-interesting) RC viewer updated on Thursday December 12th to version 3.6.13.284757, which includes a number of fixes from the initial release:

This may be the last RC update for 2013, unless something like the Google Breakpad RC is slipped out for another round of testing on Friday December 13th.

As noted in part 2 of this week’s report, STORM-68 is a third-party contribution which will allow a builder / creator to specify the default permissions applied to a new prim object (cube, cylinder, torus, etc.) on creation. Further testing has been taking place since my last update, and a number of issues and bugs have been resolved as a result. The test plan for the changes is complete and the viewer-side changes now look ready to go to LL’s internal QA. Again, this change requires server-side updates, so it is unlikely to appear in an RC viewer until the server updates are reasonably available on the grid, although this will hopefully happen in the early part of 2014.

Thursday December 12th saw the Kokua team release version 3.6.12.30743 of the viewer. This appears to be a fairly contained update, focused on updating the viewer with the recent SL viewer 3.6.11 GPU Table updates and the 3.6.12 NameUpdater changes. Neither of these involved functional changes to the viewer from LL’s side, but do bring Kokua to parity with the current SL 3.6.12 code base.

In addition, the short-form release notes highlight the following updates from the Kokua team:

The release notes also point out that when the viewer is started for the first time following installation, there will be a notice and link to check graphics drive availability. The Kokua team urge caution if the option is taken to update drivers, as system breakages have resulted in the past. They also point out that the notice is a recommendation to check for updated drivers, not a requirement to update.

The CtrlAltStudio and UKanDo TPVs have both undergone self-certification and have been added to the Third-party Viewer Directory (TPVD).

The associated wiki page for CtrlAltStudio describes the viewer as :

The CtrlAltStudio Viewer has been set up in order to try out and share a number of ideas, the first being stereoscopic 3D display and some initial Oculus Rift support . It is based on the Firestorm Viewer which it tracks closely while adding particular features.

The associated wiki page for UKanDo describes the viewer as:

Also includes RLV along with plenty of other useful tools. It won’t have all the gadgets/gizmos a lot of the bigger viewers have, the aim is to keep it as lite as possible with only the fixes, gadgets and gizmos we need to keep the Viewer stable and up-to-date! The Avatar happy! And to aid with building!

(Please note that descriptions are supplied by the viewer developers, not Linden Lab.)

Congratulations to both viewers, both of which I’ve been following in these pages. You can catch-up with them as follows:

I like whimsy; I like to smile. Sometimes I don’t feel as if I smile enough. In fact, there are times when I can be pretty dour in SL (we’ll leave the other life out of this, OK?); yet when I think about it, most of what I see and do in SL does bring a smile to my face. Otherwise, why would I be here?

One of the things that I do enjoy about exploring SL is that so much of it contains the whimsical and the lyrical, making exploration and blogging a joy. So when I saw that Katz Jupiter had reworked her region, Slightly Twisted, into ” a whimsical but  serene and peaceful  landscape filled with art, animals and fun elements,” I had to hop over and take a look. Truth be told, a visit was long overdue; the last time I had dropped in was nigh-on 18 months ago, when the region was hosting The Gathering of Sky Women in July 2012. 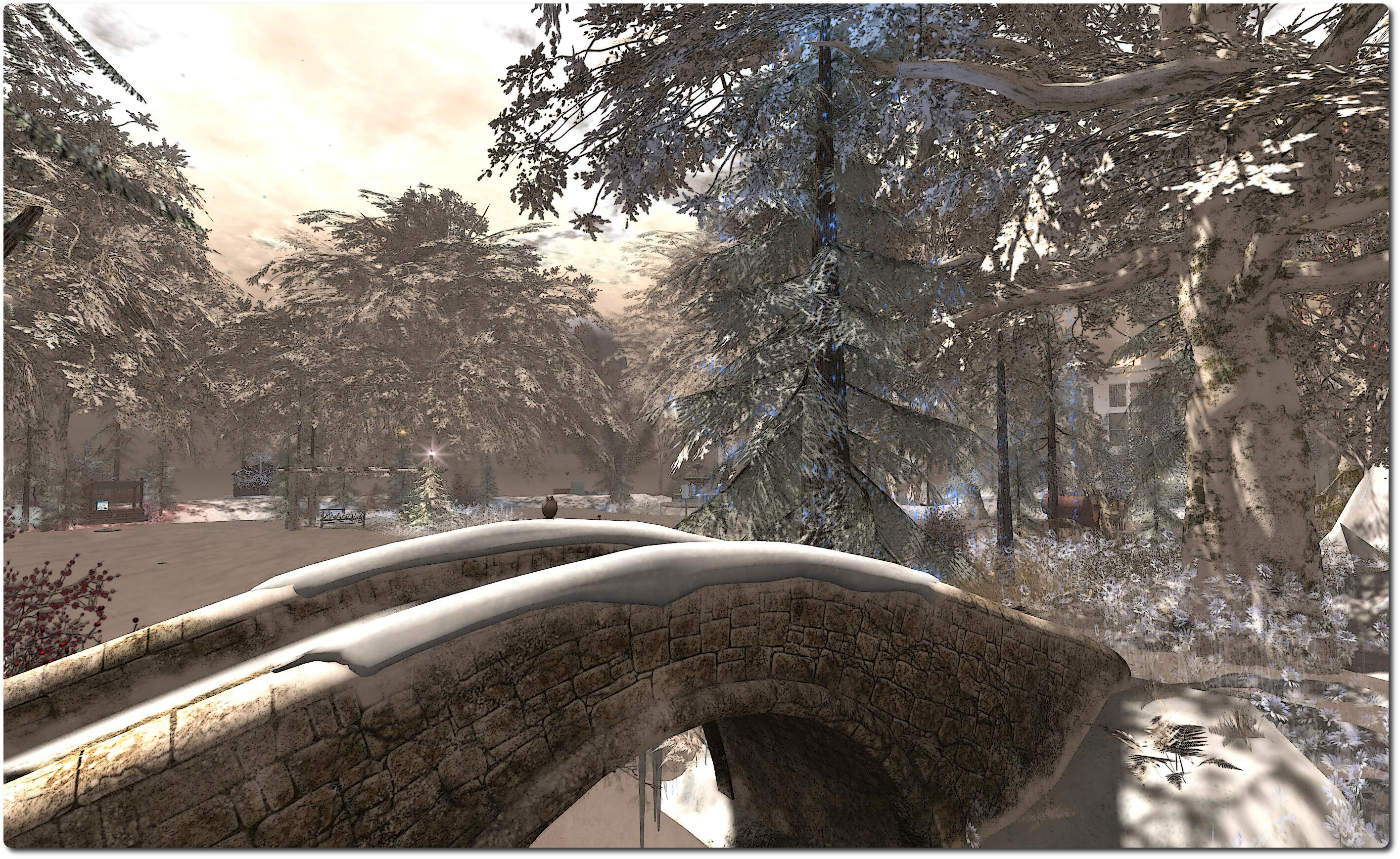 Katz’ profile gives a little more information on the region’s winter design, stating: “Slightly Twisted reflects the beauty and serenity of winter in BC, Canada, as well as the special time of the approaching holiday season. Of course there is always a few twists to make it more fun.”

You might want to wrap-up warm for this one as well; winter is very, very much the theme here – the arrival point is even inside a frozen cave, complete with a huge statue of the Snow Queen by Fuschia Nightfire. Fuschia has worked with Katz on various art projects, and more of her sculptures can be found throughout the region, together with pieces by other artists such as Kicca Igaly and Chuckmatrix Clip.

A welcome poster, complete with seasonal greetings from Katz provides a list of activities within Slightly Twisted and a note on the default windlights. You can also grab a pair of cross-country skis to ease your travelling. If you take a set, do make sure you disable any AO you’re wearing or conflicts may result. 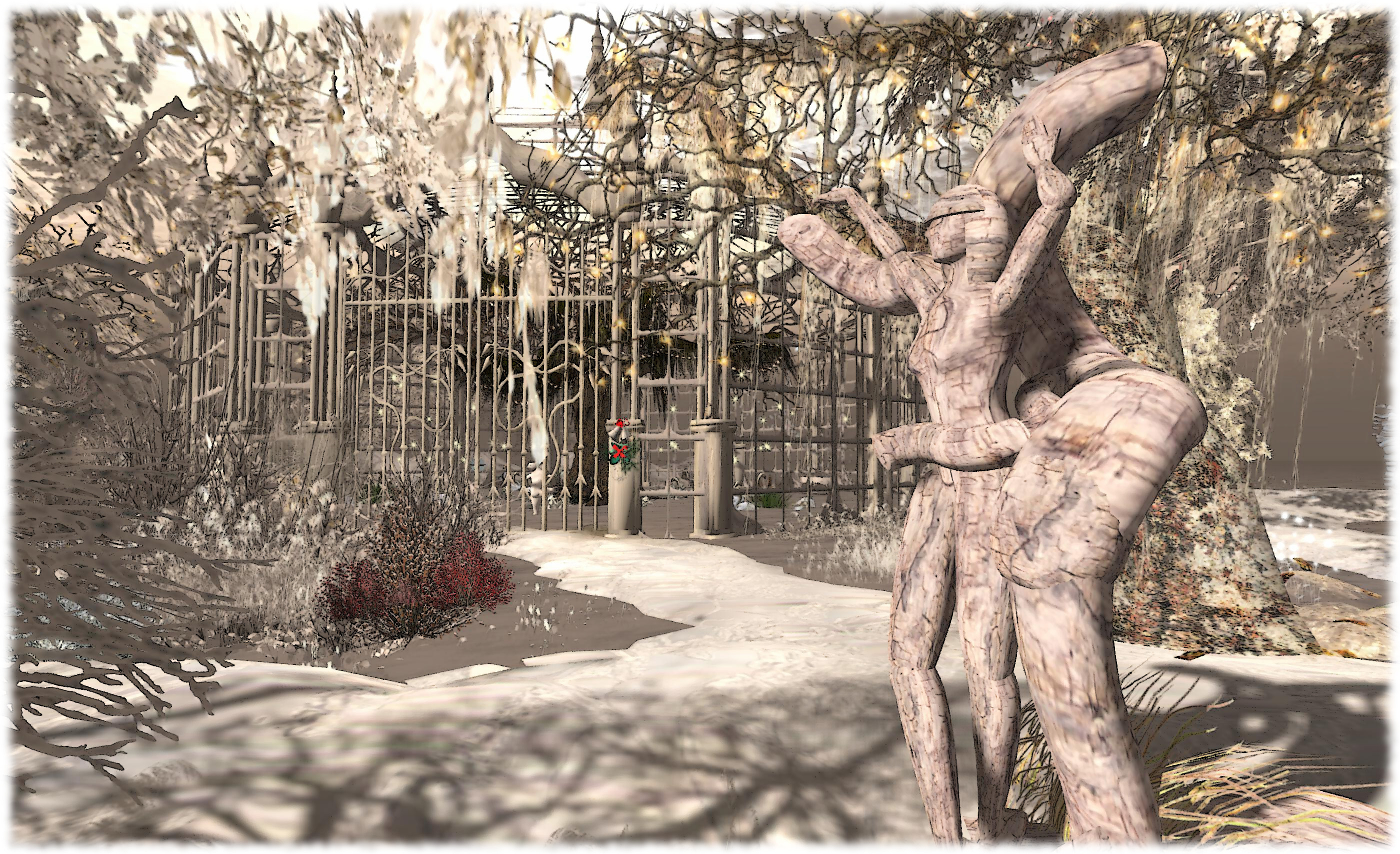 Once outside, the full beauty of the region becomes apparent. The default windlight settings work well with the environment. Combined with the seasonal lights on trees, etc., the overall effect presents something of a winter’s evening feel, with a slight mist in the air. However, as I’m a bit of an awkward so-and-so, I opted to take the majority of my pictures using a combination of Annan Adored’s 2013 windlights (which I adore  – no pun intended – and so tend to use a lot), together with Jackson Redstar’s windlights, which have long been favourites and are probably the settings I use and play with the most.

A large frozen lake offers plenty of space for ice skating – grab your skates from the little kiosk on the other side of the lake from the arrival cave. This is flanked on either side of the region by a large house and equally large frosted glasshouse. Around the lake are snow-covered paths, frosted trees strung with lights, horses and wildlife to be observed (and photographed!) and more.

The whimsy in the region comes in many forms; some of the art pieces have a certain whimsical feel, such as Kicca Igaly’s Musical Conductor, happily overseeing an invisible orchestra and their music as you skate across the ice, or the innocent (and rather cute) snowman by Trigit Amat, complete with felt top hat and scarf, standing with his back to the path, but who will deftly turn around and lob a snowball or two at passers-by. The polar bears busy with their ice ballet in the frosted glasshouse put me in mind of an advert we used to have for a certain chocolate bar (even if the ad did involve pandas and rollerskates, rather than polar bears and ice – but that’s the way my little mind works).

The pleasure of a build like this is in the composition and the detail, and Katz has done a fabulous job in bringing pieces together from a wide range of creators and artists to present a scene which really does encourage exploration and offers a lot of entertainment; so do take your time when wandering, you never know what might lie around a corner or among the trees. If you do tire of walking, there are balloon and horse rides to be found, adding even more enjoyment for explorers. If you feel like a break, there are places where you can sit and cuddle or watch the world go by. And if you get too cold outside, don’t forget the big house, which contains more art in both images and sculptures, to appreciate.

Above the lowlands, atop the hills there is more to see, including a cosy barn where Katz has some of her own artwork  on display.  There’s even a roaring log fire outside where you can warm your hands. Getting back down the hills after a visit is easy as well: simply grab a sledge and push off down the slope!

There’s more to see beyond this, but for me to say more would be to spoil things. Why not pay Slightly Twisted a visit and see what’s there for yourself?