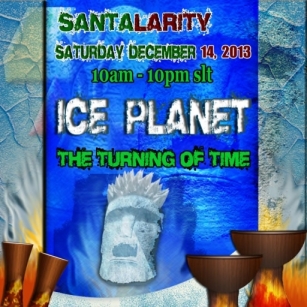 The Black Rock Desert is colder than you might expect this time of year.  A lot colder.  Overnight temperatures in Nevada’s high mountain desert have hit record lows.  But now, after dumping a load of fresh snow, the clouds are gone. The moon reflects brightly off the smooth, frigid, white desert.  The sky is awash with stars.

It’s been a long, lonely drive from Reno. Up ahead, a brilliant light glows. You rub your eyes, puzzled by the anomaly. Nothing lives out here. What could it be? You stop your pickup and step out to get a better view, standing on your running boards. All of a sudden, something seems to be pulling you…teleporting you…to ICE PLANET on the playa!

So reads the opening of the Press Release for the BURN2 seasonal event, Santalarity, which this year has the theme of Ice Planet: The Turning of Time, and kicks-off at 10:00 on Saturday 14th December at 10:00 SLT, running through until 22:00.

Santalarity sees the playa transformed into an ice planet where aliens have come to “help restore peace and hope and celebrate a renewed planet”. The event will feature art, music, dancing, skating, fire and fun, and will include content contributions from:

The scheduled events will kick-off at 10:00 SLT with a procession by the Lamplighters, and the music entertainment will start at 12:00 noon with Ultraviolet Alter, with DJs changing on the hour through until 21:00, when DJ Astro-X will present the final set of the evening.

I recently blogged about changes to my parcel on Blake Sea and doing more to landscape it decently. Turns out that post was a little premature; at the time I wrote it, I still wasn’t really happy with things, but the creative muse had decided to the take a few days off, leaving me bereft of ideas.

Since then, I’ve had time to play and re-work things a little more – which is part of the reason blog posts have been a little sporadic of late (the other being RL and sorting out things for Christmas and New Year with family and all). The place still isn’t entirely finished, but I’m approaching a point where I’ll be reasonably comfortable with it and happy to let the rest fall into place over time.

The main bits of additional work have been to add a decent mesh river course (from a kit by Flea Yatsenko), move the bridge and wooden deck, and lay some new paths which in turn allowed me to do more with the flower beds.

The river now more naturally splits the parcel into two – or at least, that’s the way I look at it 🙂 – which has allowed me to improve the look and feel of the river bank alongside the house with new paths and flowerbeds. The far side of the river is a little less organised, with trees and few ruined walls. It’s not quite as I’d like it to be, and could benefit from ferns or long grass, but I’ve yet to find anything that has sufficient caught my eye.

With a total land capacity of 800 prims, I set myself a ceiling of 500 for the work, of which some 246 was already accounted for by the house, furnishings and decor and also by my cruiser, Lady of Calas (157 prims on its own), leaving me 254 with which to play. Right now, the total count stands ay 491, so I’m feeling a little pleased with myself. A couple of things which have really helped along the way: the convex hull physics shape and mesh, both of which can help greatly reduce the land impact of a build.

I’ve written in the past about the ability of convex hull physics to help reduce LI / prim count by up to a half, depending on the complexity of the build in  question. Coincidentally, when I wrote that piece, I was using convex hull on the house I have now, reducing part of the structure from a LI of 32 to just 18.

END_OF_DOCUMENT_TOKEN_TO_BE_REPLACED

Update, December 4th: Asterion took the time to contact me and explain some of this issues which impacted his installation at LEA28. I’ve therefore offered a follow-up to this article which includes his comments, which I encourage you to read.

The fifth round of the LEA’s Artist In Residence (AIR) programme is in its final two months, and will draw to a close on January 31st, 2014. Already applications are open for round 6, and in the meantime, we’re well into the minimum time frame those awarded a region under the programme must open it to public access.

There is no doubt that he is a gifted creator. His military vehicles, ships and submarines,  military and civilian aircraft, trains and so on, are all beautifully executed, very well detailed and often a tour de force of prim design and construction. You can find them on the Marketplace, ranging in price from around L$900 through to over L$5,000 – and until the end of January 2014, you can find a good proportion of variants of those commercial models sitting on LEA28.

Tanks, trucks, buses, trains and a Concorde (partially embedded in a wall), sit on a platform of building false fronts and from which a Star Wars space ship is taking off / landing and above which a B-52 bomber looms. Under the platform sits a dockyard where many of Asterion’s ship and submarine models are docked. Quite why they are here, or what the build is intended to represent is unclear. A brief entry in his profile Picks suggests that it is simply intended to show the power of the prim to create a wide range of vehicles when many have turned to mesh.

As a concept, this isn’t an invalid idea for an installation; in many respects the prim is still the backbone of content creation in SL – and still the only means to actually build in-world. I’m just sadly unconvinced that this installation actually achieves such a goal. Perhaps more guidance was needed from someone within the LEA to help visualise the strengths and attractiveness which were hopefully present in the original proposal. As it is, what is on display comes across as less of an exhibit and more of a private sandbox. Given that the majority of models do appear to be from Asterion’s commercial range of offerings (although none of them are actually on sale in the build), it also comes over as something of an inadvertent window into his SL Marketplace store. Not that there is anything wrong with an artist selling their works; just that in this case, the cart seems to be well before the horse, so to speak.

Others may see things differently; for my part, and given there were some 30 applications for the 20 regions on offer, successive visits to LEA28 have left me wondering what might have been, had the aforementioned guidance perhaps have been given, or indeed what might have been had the region been awarded to another proposal.