The latest episode of The Drax Files turns to the prolific and ingenious Scottius Polke, aka artist Scott Rolfe.

Tall and blond in real life, Scott presents himself as a two-foot-tall gregarious, sunglass wearing, fedora-hatted otter in Second Life, where he is known – as in real life – for producing incredible works of art.

Joining SL in early 2008, he was also quick to release the potential of the platform not only as a means of artistic expression, collaboration and social engagement, but also as a means of counterpointing elements of his own real life personality and giving creative freedom to aspects of himself which might otherwise not always be so obvious to those meeting him.

“I am a Tiny otter,” he says of his SL persona. “Well, otters have kind of carefree spirit, they enjoy fun and I was hoping it would balance-off some of my more rigid personality; I’m more introverted in person and the otter is bombastic and out of control!”

He also notes that while a digital creation, Scottius nevertheless has an energy of his own, one which Scott likes to associate with, and which appears to feed into and connect with his more conscious creativity, allowing his real and virtual lives to complement one another, adding depth to his work in both.

He’s also a first-rate ambassador, as the film reveals, quick to engage others on the subject of Second Life, demonstrate it, and draw them into the world which has captivated him and show them that it is a place of enormous potential  – and fun. In this, he’s very quick to turn the widespread perception many people have about Second Life being a place for those “without a life” completely on its head.

“It seems that … there is very much a detachment from everyone else in the public sphere,” he says in reference to real life while discussing things for the episode, “[In] coffee shops here, you don’t go and suddenly there’s a big gathering of people. No. You go to your table and you might be with one other person, or with your laptop, and it’s almost completely quiet. Second Life is the opposite of the perceptions that a lot of the public hold. It’s not a place where lonely people ignore each other; it’s a place where minds connect!”

Real life can be isolating in other ways as well, and often and not Second Life really can counter it and open the doors to many rich and diverse means of genuine and positive interaction, as Scott again points out during the pre-production conversation.

“There are issues [as an artist] of putting your work out there and not getting any feedback or knowing what people are thinking about it,” he says of real life. “And you know, we don’t live in a vacuum. and an essential part of art is sharing it with other people; and for the longest time, all it seemed I was doing was storing my art in my house and in my closet, and that’s killing the purpose of art.”

With Second Life, the interaction and feedback is there and it is immediate, from peers and friends alike, and it fuels the creative and collaborative processes, something with Scott likens it directly to the vibrant and positive atmosphere he was immersed in when studying art in college which served to further fuel his creative desires; something that he admits he’d never really felt in the time between leaving college and discovering SL.

This is another fascinating insight into the way in which Second Life have captivated someone and enabled them to find further means of expression and creativity and release. Scott’s experiences and his sheer enthusiasm for the platform offer another visual and positive means of presenting Second Life to those who have not experienced it for themselves.  The breadth and depth of topics covered here once again raise the bar in terms of the reach of this series. This is not an episode to miss. 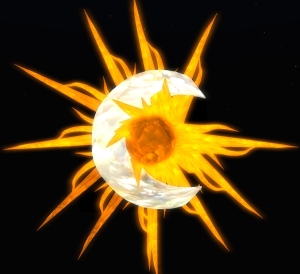 I was led to Myhns Mayo’s Myhn’s Land by Ziki Questi, who blogged about Nexuno Thespian’s Sun to Moon:  Transmigration Between Day and Night, currently on display high over the region, back in November. However, real life around here has been such that it took me until mid-December to actually go see it for myself, and I’ve been unable to find the time to blog until now.

The inspiration for the piece, according to Nexuno, is Sun and Moon, a song from Miss Saigon, although he also reveals he has long been fascinated by folktales of the Sun and Moon and star-crossed lovers, and this has played a part in the installation.

The piece comprises three interconnected areas, the first being the arrival point. This provides the visitor with information on both the work and the artist, together with some gifts. Also to be found here are several interactive spots for dancing and posing. The dances, perhaps best suited to groups, seem to reflect the various cultural influences on Nexuno’s interest in the subject of the Sun and Moon in folklore and mythology.

A large three-dimensional mural  represents the two central figures of Miss Saigon, where she is literally the Moon and he the Sun. The song Sun and Moon plays around and over the piece (so make sure you have sounds enabled), and a series of stars on the floor offer visitors a range of poses they can adopt around the piece to complement it.

Follow the lightning from the arrival area, and you reach the heat of the Sun; a world tinted in red and orange and yellow; where the heads of great birdlike creatures look down upon you, and fiery figures dance and perform acrobatics like wisps of flame caught in the wind while interactive pieces float by, enticing you to touch them and ride them. A path leads through the various scenes, rising gently toward the Sun itself.

At the heart of the Sun lies a passageway which takes you to the third element on the piece: the world of the Moon.

Here everything is cooler, with blue being the predominant colour, although infused with red. Figures and trees seen in the world of the Sun are found here as well, as are other figures, suggesting a continuity of being and connection between the two sections – just as the characters from the musical are as much connected by all that surrounds them in their world as they are by their love. Figures glide through the landscape and birds circle overhead, while at the far end of the piece is a crescent Moon, complete with ruby lips, symbolising Kim.

The is a strongly symbolic build; while the central theme may well be drawn from Miss Saigon, many of the elements within it clearly have their roots in other folktales and mythologies. As such, this is an installation worth exploring carefully; not all may become apparent at first look.