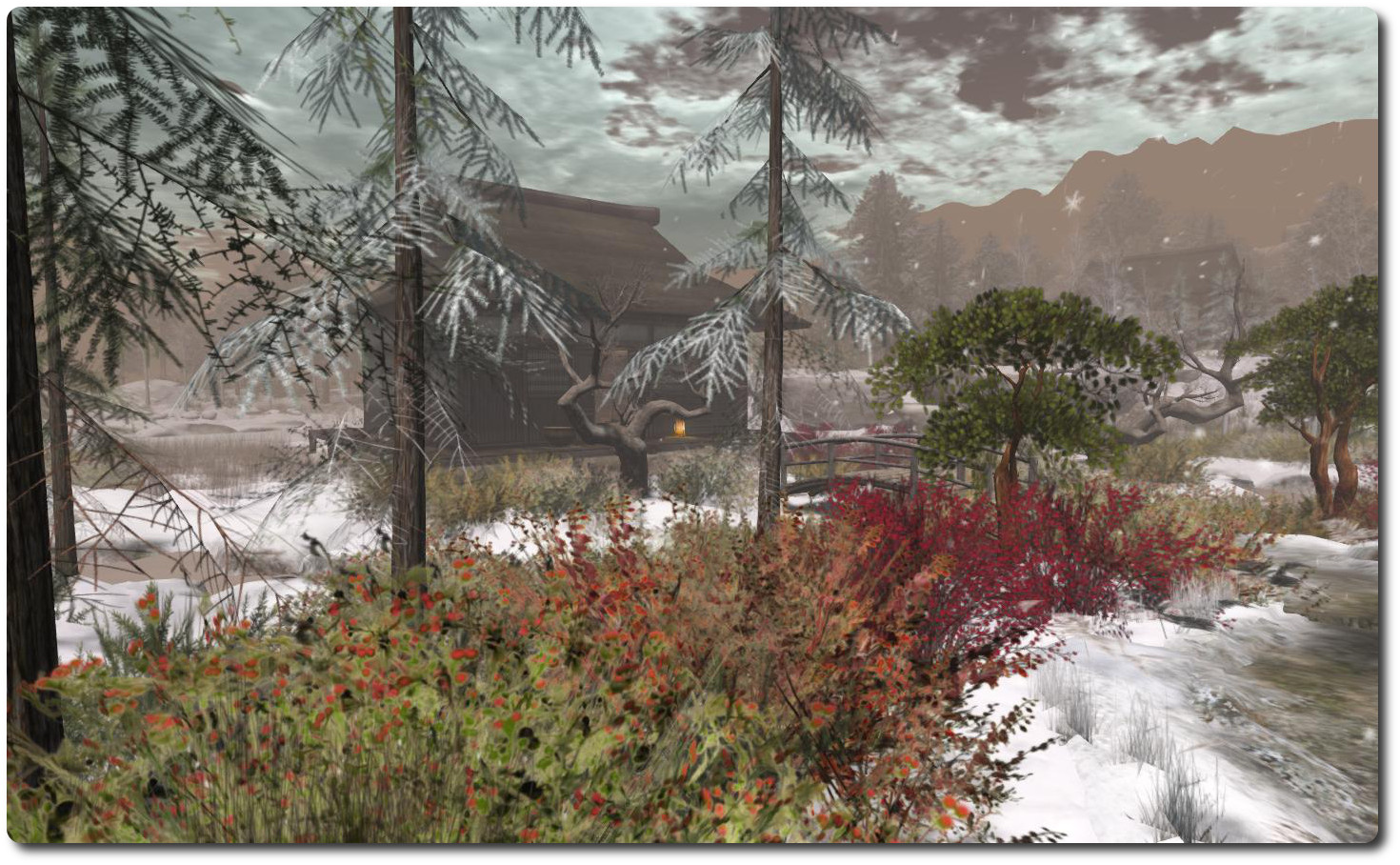 Wherever Jac Mornington builds, I follow. It’s an immutable law of Second Life. True, I may not be right behind him (fortunately for him!), and in following him, I may well be treading where others have trod ahead of me (because his builds are to SL photographers as magnets are to iron filings: an irresistible force). Nevertheless, wherever he builds, I will surely gravitate.

Already this year I’ve covered three of his region-wide builds: Black Basalt Beach,  Baja Norte and Sol Existence, all of which have been stunning in their presentation, look and feel. 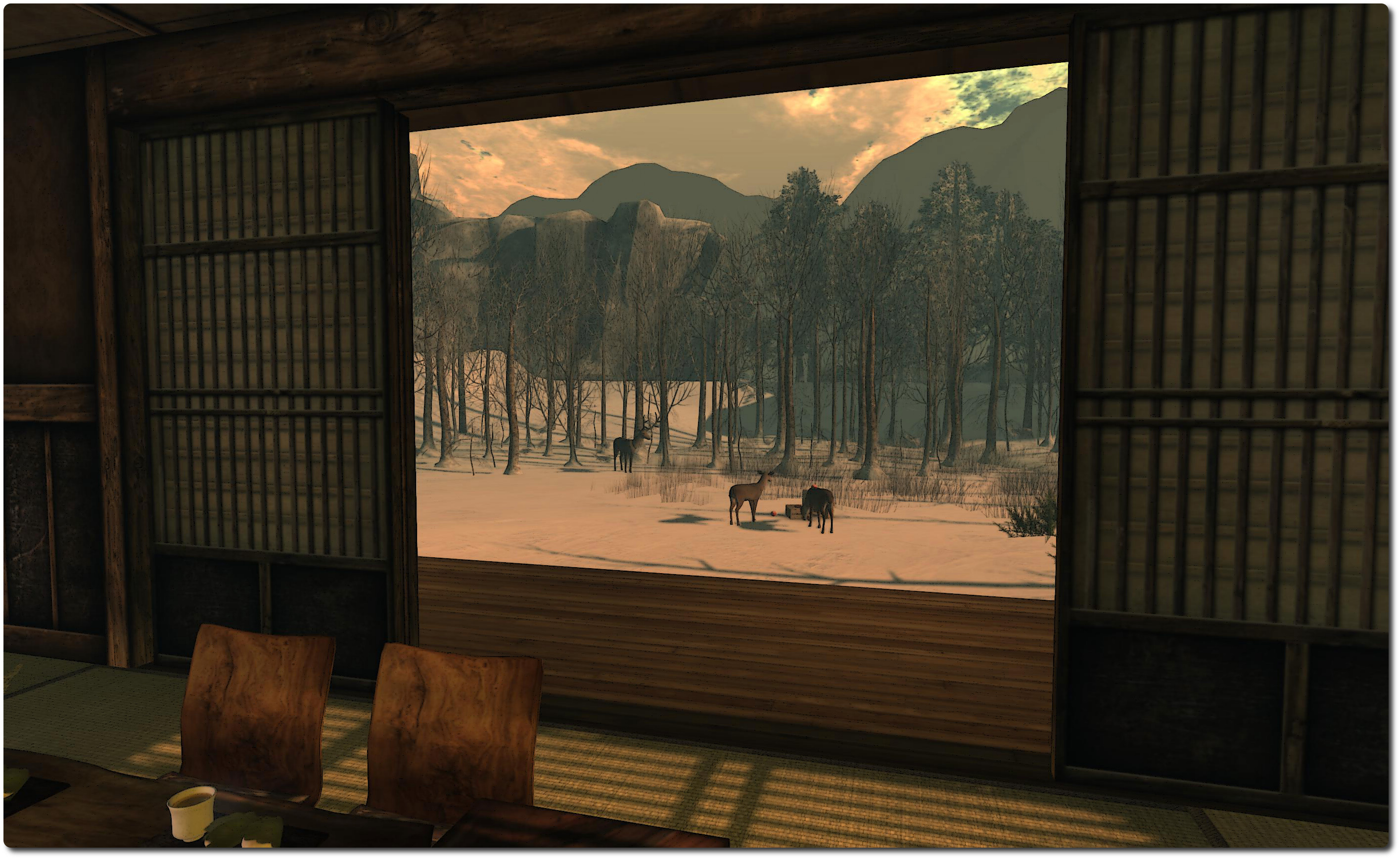 Now comes Yuki No Yume – A Dream of Snow. A homestead region, it presents to the visitor a winter scene of rural Japan, which is both simple in style and stunning in execution, with some marvellous attention to detail and lots of opportunities for the SL photographer.

The arrival point is located in the north-east corner of the region, atop a rocky outcrop, upon which sits the ruins of an old temple. with a forlorn bell, the rafters from which it was once suspended having long since split and collapsed, walls holed and partially boarded-up and with doors broken , one might think the temple deserted but for the lamp burning outside and the game of ban-sugoroku apparently in progress inside the temple shell. 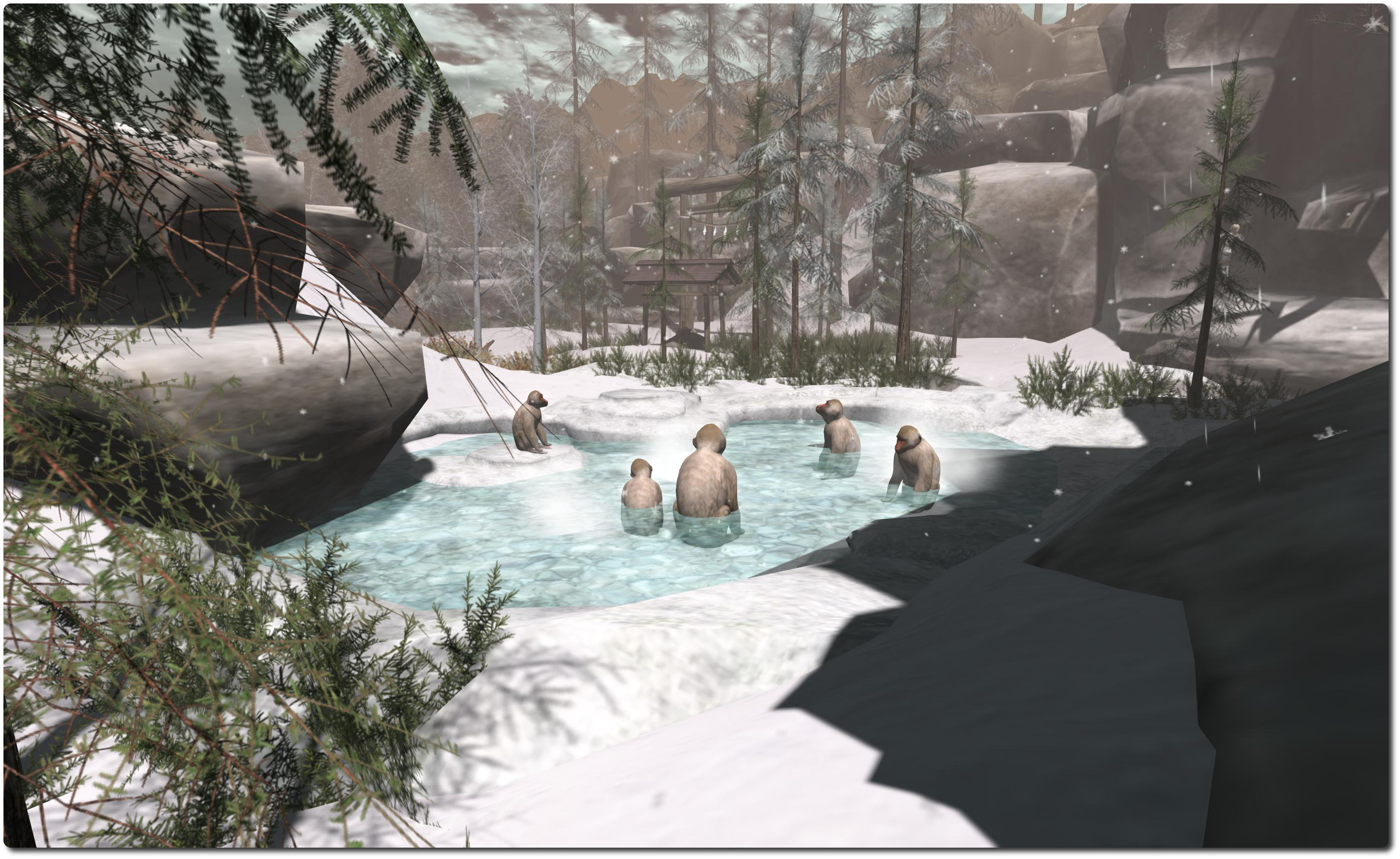 A path winds its way down the side of the rock face and past a small shine, down a snow-covered slope to the temple gate. Here sits a small spring, doubtless a place where pilgrims travelling up to the temple would have once stopped to refresh themselves in warmer days before starting on the steep climb. Now the water is frozen, and the gate stands as the entrance to the rest of the region.

Three other buildings occupy the land; a hot spring bathhouse and two small, traditional houses, neither of which is used as a residence so visitors need have no fear of invading anyone’s privacy. All three sit amidst a snow-covered landscape of trees, rocky outcrops, winding paths, streams, waterfalls and lakes (both frozen and with open water), all arranged to create a very natural environment surrounded by tall mountains, so suggestive of a highland rural region in Japan. 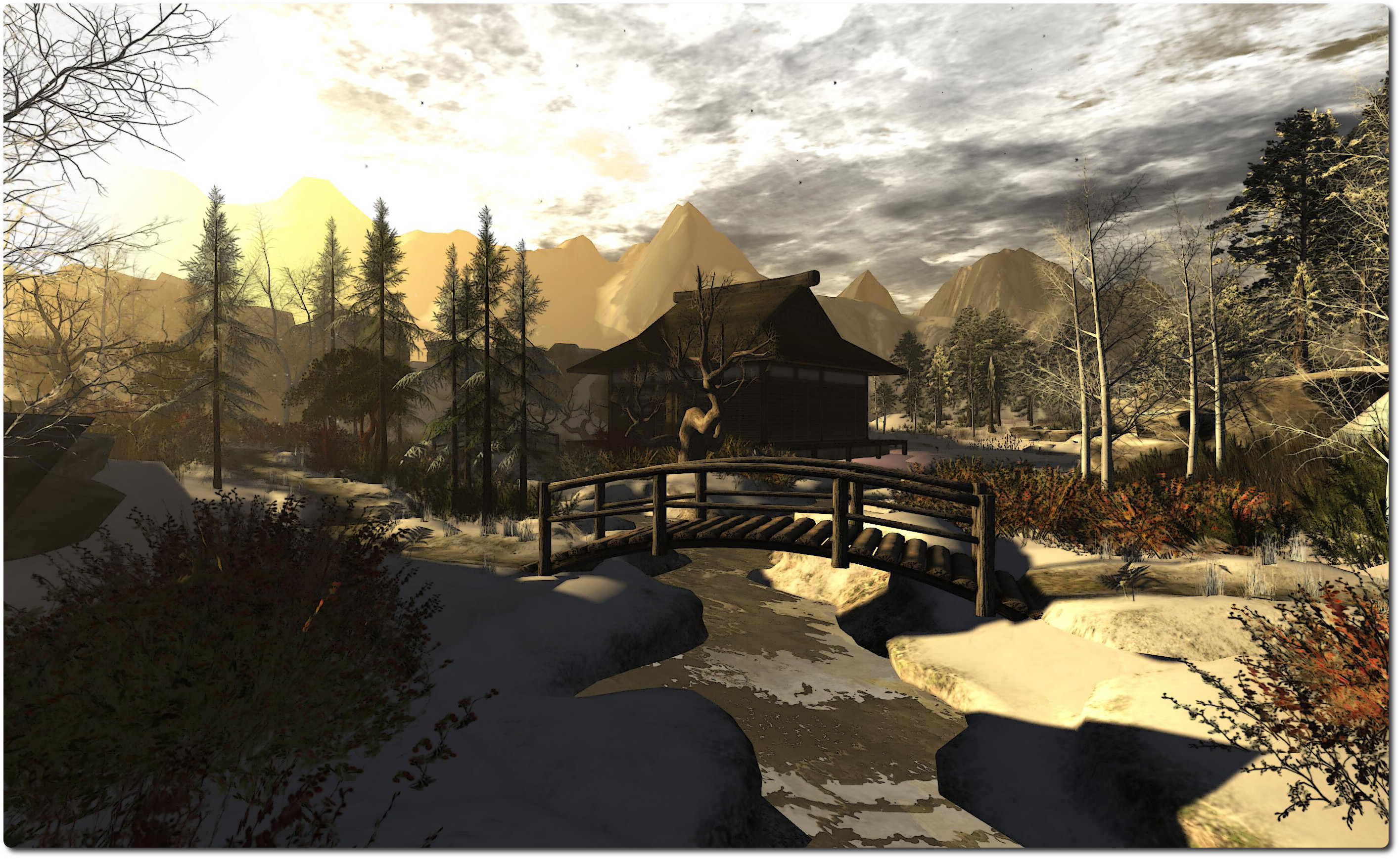 Where the visitor goes from the temple gate is entirely up to their own muse; paths are available, but most of the region is open land, inviting people to wander where they will. There is plenty to occupy the eye here, both indoors and out, so it’s worth taking time in any exploratory and picture-snapping forays into Yuki No Yumi.

If you follow the stream up towards the waterfall, you’ll likely come across a group of Japanese macaques, otherwise known as snow monkeys, doing what they do best: sitting in a hot spring bath as the snow falls around them. Elsewhere, deer take advantage of an overturned crate of apples, seals sit on a snow-covered sand bank, apparently wondering who the hell has been messing the with water to make it solid, and red-crown cranes dance upon the partially frozen lake; all of which make for some excellent photograph opportunities.

Step into one of the houses, and you’ll find an opportunity to play a hand of Hanafuda (koi koi), listen to music on an old gramophone,  sit and warm yourself by an open fire, enjoy a cup of tea or rest for a while on a bed – assume the fox and rabbit will allow you! 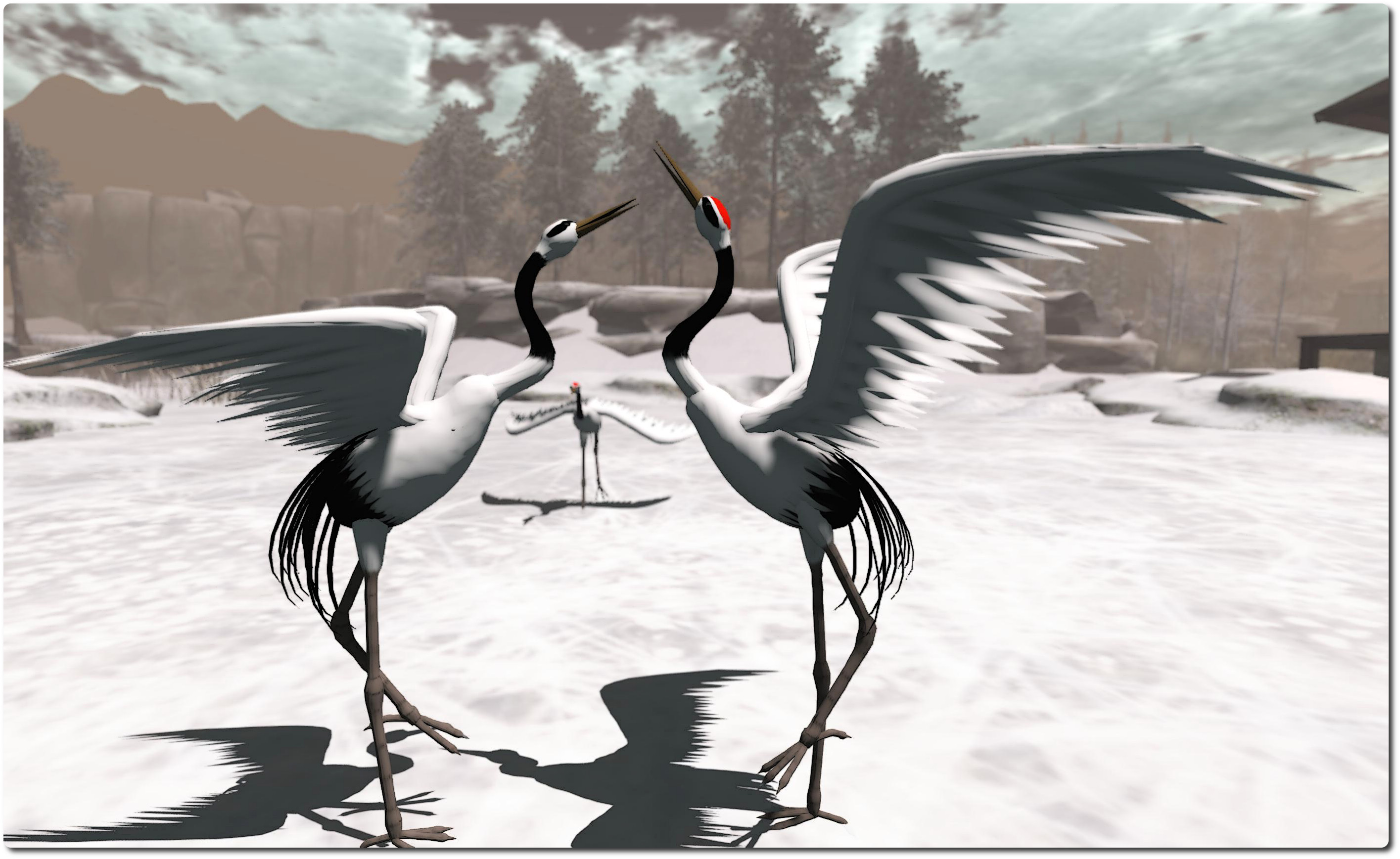 This really is another wonderful build from Jac and his partner, Rie Silverfall, one which is every bit worth the time taken to visit as his other in-world creations. For those who like taking photographs of the places they visit, there is also a Flickr group where images of Yuki No Yumi can be shared.

And as I mentioned Japanese macaques earlier, here’s little film of them in real life :).

The following notes are taken from the TPV Developer meeting held on Friday December 6th. A video, courtesy of Northspring, can be found at the end of this report. The numbers in braces after each heading (where given) denote the time stamp at which the topic can be listened-to in the video.

The Name Updater RC viewer, also released on December 3rd, has been updated to version 3.6.12.284506. This contains no functional changes to the viewer itself but contains two sets updates, hence the odd name.

The first of these is a fix for the viewer updater where problems can occur if a new update to the viewer is downloaded by the updater but deleted somehow prior to  the installer itself being executed. The second set of updates cover:

The aim of these changes is to further improve the viewer build process and reduce the number of places changes have to be made in order to change the viewer channel name when building different flavours of the viewer (LL’s own or a TPV).

The RC has been performing well in terms of low crash rates, etc., and looks set to be promoted to the de facto release viewer in week 50 (week commencing Monday 9th December), and so will see-out 2013 as such if this is in fact the case.

It is possible a further Google Breakpad RC may appear in week 50.

The Maintenance RC viewer 3.6.12.284430, released on December 3rd  suffered an abnormally high crash rate, prompting it to be withdrawn in order for it to be looked at and crash issues diagnosed / fixed. Once these issues have been dealt with, the viewer will be returned to the release pipe.

The Project Interesting (aka “viewer-interesting”) RC viewer has been in RC for a while and is suffering a high number of crashes, which are currently being investigated by the Lab. Unlike the Maintenance RC viewer, it has been left as an RC simply because issues are being found with it, because of both the number of people using it and the broad range of systems on which it is being run and which the Lab couldn’t possibly account for in their own testing.

At the moment, the Lab are trying to put together an update for the viewer, but they still have a couple of “pretty serious” crash issues which have yet to be resolved. However, the hope is that this may actually make it out into the world before the no change / code freeze window comes into force  on Monday December 16th, which affects all server releases and all viewer release channel releases. This would allow the updates made to get further “in the field” testing during the code freeze / holiday period.

That both the Project Interesting and Maintenance RCs are experiencing issues is something of a validation of the new viewer release process introduced by the Lab earlier this year, in that the problems being encountered with both of these viewers are not blocking the viewer pipe, unlike the situation of just over a year ago, where a series of crash issues with the old beta viewer completely halted all significant viewer updates.

As noted in part 2 of this week’s report, the Fitted Mesh project viewer received a set of updates (including new avatar skeleton files) in the form of release 3.6.12.284458. The project viewer has so far received a very low number of downloads – somewhat unsurprisingly – with the total number of people using the viewer thought to be under 2,000. This means that it hasn’t as yet been used widely enough to generate meaningful crash statistics.

The response to the skeleton changes within the viewer has been “good”, and the viewer has seen a reasonable number of JIRA issues raised under the FITMESH project, etc., although the Lab cautions against anyone using the changes contained in the viewer in anything other than an experimental version of their own viewer until such time as the code reaches a Release Candidate status. The latter will not happen before the end of 2013, although there may be a further project viewer update for Fitted Mesh before the end of the year.

One thing which may happen when the viewer is approaching a release status is that it will bring with it a “significant bump” to the viewer version number, not the least of which is because users on viewers without the code may see some bizarre, or at least oddly fitting clothing on avatars using garments weighted to use the new system, as noted in my launch preview of the Fitted Mesh project.

Overall, it appears that the Lab is “pretty happy” with the way the work is developing, although they would like to see more people involved in using / testing the viewer, particularly anyone proficient in rigging mesh garments, etc, especially given the nature and state of the project, as Oz Linden pointed-out:

This is one of those times when things are in flux and can be changed… We have never made changes to the avatar skeleton casually, and we’re making a round of changes now; we’re wildly unlikely to make another round of changes for years. So if there is feedback to be had, this is the time to have it.

So if you are a creator and do have an opinion on how things might be better handled within the Fitted Mesh solution, now is the time to be involved and potentially influencing the Lab’s thinking. not every idea put forward may be taken-up; but on the other hand, waiting until the changes have been made and the viewer released will certainly mean that any ideas someone may have will have passed their sell-by date.

The Delay in Opting for this Solution

Part of the general feedback voiced when the Lab announced the Fitted Mesh viewer came in the form of questioning why it took the Lab so long to reach the decision to go with the approach. Part of the reason appears to be that mesh deformation and Server-side Appearance projects required the same expertise with the Lab to be applied to them, and so were vying with one another for manpower – and the decision was made to give the SSA project priority.

During the Server Beta meeting on Thursday December 5th, VoidPointer Linden indicated the work on making the viewer operate with the Oculus Rift headset was now “feature complete”, and that a (presumably project) viewer will be appearing “soon” with support for the headset. How soon is open to question, given VoidPointer had to be somewhat circumspect. However, following the TPV developer meeting, it appears that “soon” might actually be a little more in the realm of “later” than may be the case.