It was back to Kultivate’s in-world base of operations for me once more at the start of July 2019, following the opening of the newly-named Kultivate AIR Gallery (formerly part of the Windlight Gallery).

Mixing Second Life landscapes with physical world art, monochrome with colour, paintings with drawings, abstracted pieces with experimentalist – and with just a hint of avatar-focused studies in the form of Pam Astonia’s eye-catching Profile portraits, this is a richly engaging exhibition that demonstrates the full roundness of Second Life as a medium for displaying art.

As is always the case with ensemble exhibitions, limiting comments to just some of the artists can seem a little unfair; such is the depth and quality of art on show here, this is perhaps doubly so. However, I must admit that I did find myself particularly drawn to certain pieces.

The five photographs of SL landscapes by Anouk Lefavre, for example, framing marvellous horizon images with an opulent use of light and shadow contrasts or natural blending of haze to produce vistas that pull at the motions. Then there is Venice – Italy and England – Time of Henri VIII and Anne Boleyn (seen in the banner image for this article) by Angyel Resident. The latter of these, I believe, captures part of Tahiti Rae’s 2015 LEA installation, Love, Henry (read here for more), but both offer such a marvellous contrast of style and colour, they cannot fail to draw the eye and mind into them.

As a part-time builder / kitbasher, I’ve long enjoyed using materials in various builds, and normal maps in particular – if used correctly – can add depth to SL photos where post-processing has been used to make it appear as if they have been painted, sometime which is demonstrated (if on a slightly exaggerated scale, given it is designed to bring the materials to the fore) within Myra’s piece.

Then there are Sevant Anatra’s paintings of Native Americans. From portraits to capturing a part of the Anishinaabe creation story, these are marvellous, evocative studies with (again) a sense of depth and life that holds one’s attention and allows the imagination to unfold stories.

And that’s just my pick of four artists from what is a superb selection of art, so do take the time to hop over to the Kultivate AIR Gallery and take a look for yourselves. 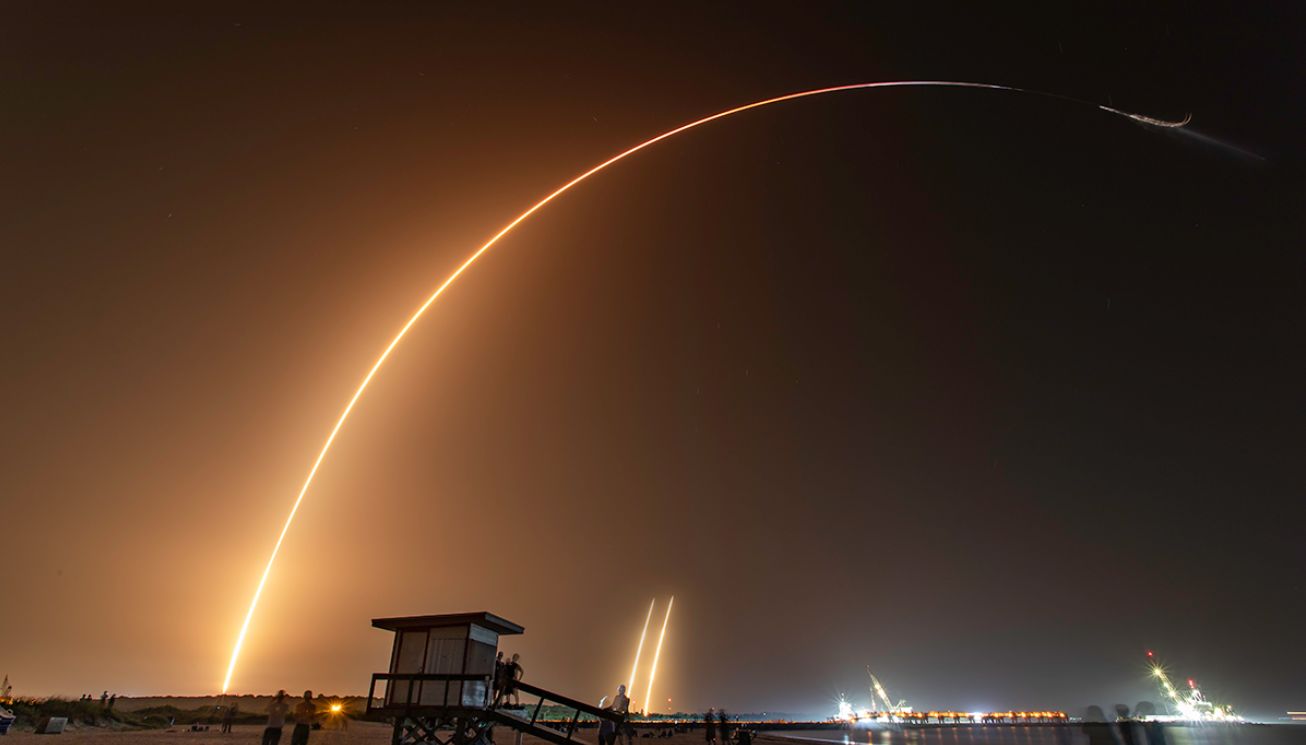 A stunning timelapse view from the beaches of Florida as the Falcon Heavy STP-2 rocket arcs across the sky. Credit: Alex Brock

On Tuesday, June 25th, SpaceX launched their third Falcon Heavy Booster. Called STP-2, the primary aim of the mission was to help qualify the Falcon Heavy for US Department of Defence launches – but that didn’t stop it being the most ambitious mission for any SpaceX launch vehicle to date.

Carrying a total of 24 separate satellites into orbit, the vehicle had to deliver its payload to three distinct orbits around Earth, which in turn required the core stage of the rocket to fly fast enough to make its planned recovery at sea potentially problematic, while the upper stage had to make four individual engine burns – the most ever by a SpaceX launch vehicle.

Lift-off came at 02:30 ET, the rocket powering away from Kennedy Space Centre’s Pad 39-A. As a night-time launch, the flight provided a stunning view of what is called the “Falcon nebula”. This where, after the two Falcon 9 booster stages have separated from the core of the rocket, they flip themselves over while still increasing their altitude, and re-fire their engines to slow their forward momentum in order to start their descent back for a landing at Cape Canaveral Air Force Station. Together with the core booster’s motors still operating at full thrust, their exhausts can create a majestic pattern in the sky. In this case, given all of the three Falcon 9 boosters had been pushed to the limit, the vehicle was much higher in Earth’s rarefied atmosphere and this resulted in the boosters creating a remarkable pattern of colours against the night sky. 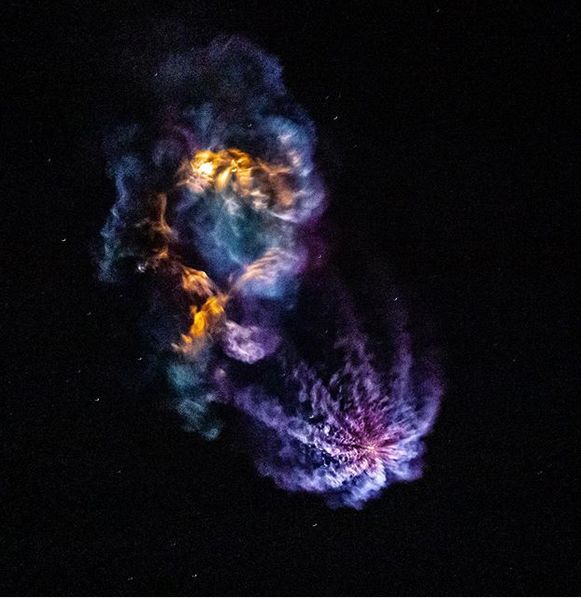 The “Falcon nebula”: the colourful plumes from the two Falcon 9 booster stages as they fire their motors in a “burn back” manoeuvre, with the core stage going at full throttle towards the bottom right. Credit: Alex Brock

Both of the Falcon 9 booster stages successfully completed their burn-back manoeuvres and made perfect landings at Cape Canaveral Air Force Station, just south of NASA’s Kennedy Space Centre. It had been hoped that the core stage would make it three-for-three by landing on one of the company’s two Autonomous Drone Landing Ships, parked some 1,200 km off the Florida coast. Unfortunately, such was the speed of the stage, it overshot the landing ship and crashed into the sea, smashing itself to pieces.

However, the loss of the core stage wasn’t the end of the good news for SpaceX. The upper stage continued on into orbit, successfully deploying its entire payload safely. And while it is said that re-naming a vessel can bring bad luck, that didn’t prove the case here, as the company’s high-speed chase vessel Go Ms Tree, which had previously been called Mr. Steven, finally and successfully caught one of the flight’s two payload fairings as they made a return to Earth.

These where the two large “clamshells” that encase the payload during the flight through the denser part of Earth’s atmosphere. When the rocket’s upper stage is high enough, these are jettisoned and – in traditional flights – allowed to burn-up in the Earth’s atmosphere. However, at US $6 million a throw (a cost that has to be passed on to customers), SpaceX prefers to try to recover their payload fairings when they can. This means the fairing use their shape to ease their way into the denser atmosphere before deploying parachutes,  to land – and float – on the sea, but the company would prefer to keep them away from the corrosive influence of salt water.

Enter Go Ms Tree. Equipped with a large net over its stern deck, the ship is designed to move at speed under the flight path of returning fairings and snag them in the net. Six prior attempts to achieve this either failed or were abandoned, but on June 25th, the ship did successfully capture one of the returning fairings, although the second still had to make a splash down.

A Dragonfly for Titan

In December 2017, I wrote about a proposal to fly a nuclear-powered dual-quadcopter drone on Saturn’s moon, Titan. One June 27th, 2019, NASA confirmed the mission  – called Dragonfly – has now been officially selected for flight in what will be a tremendously ambitious long-duration mission, due to commence in 2026.

Titan is the only celestial body besides our planet known to have liquid rivers, lakes and seas on its surface, although they contain hydrocarbons like methane and ethane, not water. Nevertheless, they sit beneath a dense atmosphere which has commonalities with primordial atmosphere of Earth and which is rich in complex organic chemicals there such as tholins and polycyclic aromatic hydrocarbons, so these lakes and rivers could contain all the building blocks of life.

Measuring 3 metres (10 ft) in length, Dragonfly is not s small vehicle. Designed by Johns Hopkins’ Applied Physics Laboratory (APL), it is intended to be a be a highly capable vehicle capable of carrying a full suite of science experiments while completing multiple flights on Titan. While the focus of the mission will be to try to determine how far prebiotic chemistry may have progressed there, the vehicle will carry a range of instruments as well, some of which will include:

While the mission will launch in 2026, it will take almost eight years to get to Titan, arriving in 2034, when it will become the second vehicle to visit the moon’s surface after Europe’s Huygens lander, which travelled to Saturn and Titan as a part of the Cassini mission.

END_OF_DOCUMENT_TOKEN_TO_BE_REPLACED

Recently, during a Meet the Lindens session held at SL16B and at a Third Party Viewer Developer meeting, Oz Linden, the Senior Director, Second Life Engineering, provided further information on the status of the app, and what the initial release of the application will include.

While there is a degree of overlaps between what was said at the two events, there were also some differences in the information provided, with the TPV Developer meeting in particular being used to give further information on the app.

This being the case, I thought I’d offer a mini-update on the status of the app’s development, combining the comments made from both meetings into a single bullet-point list, with the relevant audio extracts from both meetings also provided for reference.

Note that throughout, Oz is only talking about the initial releases of the app, and so these notes and the audio comments should not be taken to mean the app will be “feature complete” when it appears, but that it will be enhanced over time, hopefully developing features that will make it more client-like (e.g. Radegast, MetaChat, lumiya, etc.) in general capabilities.

Summary of the comments made:

Comments from the TPV Developer Meeting, June 28th, 2019 (these also include a comment on the app and iPads from Vir Linden):

Again: note there is some overlap between these two sets of comments.