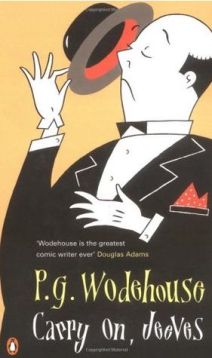 In The Aunt and the Sluggard Bertie again finds things getting a little problematic as a result of a relative of a friend.

Rockmetteller “Rocky” Todd is the kind who prefers quiet country living, but his aunt wants him to make a move to New York City so he can send her a weekly letter describing city life. Thus he faces a dilemma. The allowance his aunt is willing to pay Rocky to help with living in New York would be most welcome – as would continuing to be remembered in her will. But living in the city is something Rocky would rather not contemplate – and so he turns to Bertie for help.

Inevitably, it is Jeeves who comes up with a possible solution: why not pay someone else to stay in New York and write notes on city life that Rocky can then incorporate into letters to his aunt? Bertie takes the idea a stage further: Jeeves can write about his evenings at his club, about the celebrities there, and more.

Everything proceeds swimmingly until Rocky’s aunt arrives on Bertie’s doorstep – his apartment is the address Rocky has been using for his letters, so she believes it is Rocky’s New York home. And thus things threaten to unravel… 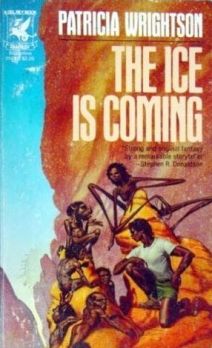 Frost is seen in summer and ice patches form in spite of the hot Australian sun. To the Happy Folk, living on the continent’s green edges, the frost is a reason to laugh and joke. For the Inlanders (Wrightson’s fantasy view of the Australian Aboriginals), however, the frost was once seen as a warning that an ancient foe, the ice-bearded Ninya, were on the rise – and so it might be that they are again.

The first to recognise the rise of the old threat is young Wirrun of the People. He leaves his job and sets out to meet the Ninya, taking with him as a sidekick, the petulant Mimi, and for protection, the Power bestowed by the first of the creatures in their path. 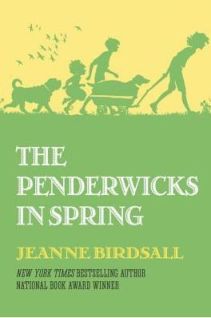 Springtime is finally arriving on Gardam Street, and there are surprises in store for each member of the family. Some surprises are just wonderful, like neighbour Nick Geiger coming home from war. And some are ridiculous, like Batty’s new dog-walking business.

Batty is saving up her dog-walking money for an extra-special surprise for her family, which she plans to present on her upcoming birthday. But when some unwelcome surprises make themselves known, the best-laid plans fall apart.

Filled with all the heart, hilarity, and charm that has come to define this beloved clan, The Penderwicks in Spring is about fun and family and friends (and dogs), and what happens when you bring what’s hidden into the bright light of the spring sun.

Dive into Jeanne Birdsall’s classic revisiting to the lives of the Penderwicks, read by Caledonia Skytower.

Deep beneath the Irish Sea lies a kingdom beyond mortal men’s imagining… Until one day a fisherman finds a beautiful maiden washed ashore. She cannot speak to him in any voice, though her yearning shines from her eyes. But with forces of land and sea arrayed between them, will they ever find their happy ending?

NOTE: Seanchai library is taking a break between August 5th and 10th for a summer break.

Basilique is perhaps one of the more well-known public regions in Second Life. It has been popular among SL photographers, as well as once being the home of the Basilique Performing Arts Company.

In more recent times, ownership of the region has passed to Niccoli Sweetwater, who has taken it on with the aim of maintaining and extending the region’s arts ties, as she stated to me recently, “My goal is to restore Basilique and share it with the SL arts and live music community. This place is truly a labour of love.”

As a part of this, Niccoli has not dramatically changed the ground-level design of the region, which still retains its town-like feel and presents a welcome feeling of the familiar. Those who have visited the region whilst under its prior ownership will recognise the long form of the Basilica, modelled after the San Pietro Martire, in Murano, Italy.

Once a centre of productions by the Basilique Performing Arts Company, the Basilica has been restored to its role as a church, its triple nave dominated by two huge frescos. The pews and candles here are interactive, and the church is now offered for weddings and ceremonies.

Other familiar locations remain as well: the domed basilica, now the Galleria di Basilique, a ground-level art gallery; the pier and the appropriately-named Bar Moderna sitting in its corner terrace with fish still “flying”. But what now draws them together is a history and tour guide that has been written for the region by Niccoli. This both places the setting as an island community located on Lake Garda and traces the town’s story from 1292 as a fortified defensive location, through more recent times.

A group of deserting French knights founded Basilique in 1292, when they fled seeking refuge from the Mamelukes after the fall of Acre. The knights chose the island for its defensive position and established a stronghold, soon intermarrying with the local population. Over time the legions increased fortifications, but a fire destroyed the original structure in 1457 at which time the remaining inhabitants constructed the foundations for the modern town around the only remaining edifice – the stone tower that was at the centre of the old fort.

– From the “History of Basilique

The guide also points out the smaller locations in the region, including the Member’s Club, host to wine tastings, and incorporated within the old bathhouse alongside the island’s gardens, the pier with is rezzable rowing boats and the Taverna Fico Bar.

A new addition to the region is the Palazzo  di Basilique, a gallery space located in grounds of its own up in the sky. It is intended to offer “an elegant venue with a huge dance floor and dinner tables for a romantic night out listening to some of SL’s most talented artists.” Outside of this is a terrace café and gardens  to be enjoyed.

Still a photogenic region with much to offer, Basilique remains an engaging destination for visitors old and new. Just do please note that the house on the island to the north-east is a private residence that is not open to visitors.

Currently open at The Eye art gallery, curated by Mona (MonaByte) is a most intriguing exhibition of digital photography and art by Kubbrick, entitled InPerfección.

Kubbrick describes himself as “a sailor of the virtual seas and an artist [who] captures images in the physical world and transforms them through software and pictorial techniques in a search for the beauty of shapes and colours.”

One the ground floor of the gallery space, for example is a series of studies -of water and bubbles. These include photos of all or parts of the human body in the water, some in clear focus, some blurred, with applied lighting and contrast that marvellous utilise colour and reflection to explore our own relationship with water.

This can be seen within Al Calor de la Flama – “the colour of flame”, and through the dynamics of motion in water shown through Nadadora de Aguas Profundas  – “deep water swimmer” and Escape en el Agua – escape in the water; mixed with these images are thoughts even on the nature of rain on a window with Paisaje (“landscape”). However, for me, Escape en el Agua is particularly captivating; within it there is a wonderful displacement of air through the water that’s given birth to clouds of bubbles, and these naturally lead on to the remaining images in this part of the gallery, which in turn offer fascinating abstractions on bubbles.

It is perhaps “abstraction” that most applies to Kubbrick’s style, and this is further demonstrated in the digital pieces to be found on the upper level of the gallery.

These offer a rich mix of art, colour and form, all beautifully dynamic, some apparently created purely through digital means, others utilising “everyday” objects – the roof of what appears to be a gallery or stadium, the humble engine block, gears and chains, all combined with with digital techniques – to produce finished images that have an incredible feeling of being purely fractal in form. These all stand as captivating images in their own right; however, they also draw the eyes inevitably to Enfrentamiento (“confrontation”), a piece that appears to capture  in mirrored form a piece of wall art.

My one regret with InPerfección is that I did not drop in sooner. The exhibition opened on June 28th, 2019, and so may not have much longer to run. So, if you do want to witness it for yourself, I would recommend a visit sooner rather than later.