No further updates this week, leaving the current crop of in-flight viewers as:

The “special release” CEF RC viewer, version 6.4.1.541204, does contain the anticipated codec, etc., updates. However, it is classified as a “special” release at this point in time, as it includes some “short cuts” taken in the build process in order to get it out as a proof-of-concept for the Adult Swim event.

The recommendation is that TPVs should not adopt the code from this particular build, but to wait until a more formalised RC release of the CEF updates is made.

As has been noted in this blog and elsewhere, Apple is deprecating OpenGL. This has raised questions over the last several months about the future of graphic support in SL for OS X.

Currently, one of the routes under consideration is to undertake a complete switch-over (Windows and OS X) from OpenGL to using Vulkan.

With regards to any graphics system update, it is possible that the requirement to run with the viewer’s Advanced Lighting Model (ALM) always enabled might become universal. LL are aware that many people run the viewer with ALM disabled, and so are curious as to how much impact any decision to make it universal might have.

Part of the problem here is that people disable ALM for a variety of reasons. For example:

Discussing myself is something that doesn’t come particularly easy, especially when it comes to anything like self-advertising or my photography – which I regard as passable for blog illustrations, little more.

However, Sorcha Tyles recently asked me to consider an exhibition of my work at her gallery of Artful Expressions, which I admit to finding incredibly flattering  – if more than a little nerve-racking. However, in talking to Sorcha, I decided to take up her generous offer.

So, opening at Artful Expression on Friday, May 8th at 14:00 SLT is a small selection of my work entitled Impressions, which features images (some not previously seen) of my recent SL travels. Music is being provided by DJ Julz, and I hope you’ll join us for the opening – or hop along to the gallery and take a look while the exhibition is open through to the end of the month(ish). 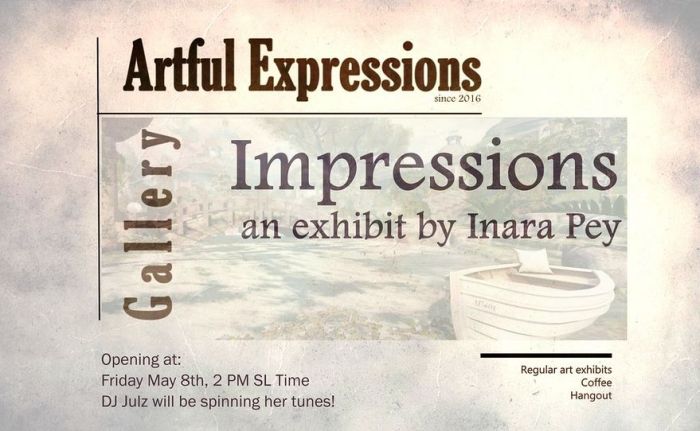 Many, many thanks to Sorcha for the invite and encouragement, and for arranging the exhibition!

We came to the coast once more early on the morning, and even as the Sun rose we could see its light glittering off the blue domes of our destination even before it fell across the seas beyond.

It was said that Zodiac had been founded by a company of Royales who departed the fair city of Magnificat many years ago. I had once visited Magnificat as a traveller riding alone, and the memory of that journey remained never far from my thoughts. As we left our mounts fed and watered on the outskirts of the city, so I was able to see a certain resemblance within these dome-topped halls and the spire-topped palaces of that ancient place. But more than that, this city brought to mind legends of the great temples and river of the Golden Delta, while the walls of water that fell straight and true down hand-made cliffs brought forth tales of the floating retreat of Sanctum, said to be held aloft on pillars of crystal waters.

I had heard that Zodiac was a place in which the mysteries of the heavens are venerated, and above the doorways of these tall houses glowing blue spheres glittered and turned with the patterns of the stars, marking out the heroes and gods of the past as they were said to look down from the night skies. Within the great hall of each of these houses, another glowing wheel of stars turned.

Yet these were not what held our attention, for as we came to the city’s waterfront, so we saw for the first time the great orb hanging effortlessly in the air over the city’s central channel. Sea blue in colour, it sat within great metal ribs, the golden powder of stars contained within it; and within that cloud, an entire world I could scarce recognise. As we looked upon this wondrous thing, so I perceived rivers of golden energy flowing outwards from the globe and into the buildings below.

“The energies of the heavens. Our blessing and our studies.” I turned towards the voice, and found a tall citizen of Zodiac standing close by, his long blue robes sparkling like the light flowing outwards from the sphere, his face fair and ageless, his eyes a bright, piercing blue. “They are what brought us to this place and raised this city. They give life and peace to all who come here.”

“It is magnificent,” I replied softly, “And bewitching; but how…”

“Does it remain so in the air?” He smiled, his face brightening with an inner light. “How else, but by the grace of the Guardians?”

“I thought the Guardians were but a myth!” I interrupted, and his eyes twinkled in the warmth of mirth.

“Perhaps. Perhaps not,” he replied. “It is true that they are now rarely seen here within the city; but they might yet be found for those with an open heart – such as you, who have travelled so far.” He bowed courteously, arms wide. “May I be your guide?”

And so we walked the paths of Zodiac, and its many parts were revealed, from stone gazebos where models of many worlds turned, to high terraces overlooking the waters below, where we could look on the energy-laced waters that fell outwards from the buildings around us, as boats passed down the channel and out to sea. Our host proved affable, yet mysterious; much of the history of Zodiac did we learn, but on some things he remained quiet, turning conversation away from the strange flow of energy from globe to building to water, while also turning away questions as to his place within the city.

So the day passed, with refreshments at a waterfront garden, and then a slow walk to our lodgings, where our mysterious guide bade us a fair evening, his cloak swirling about him in the lowering light of the evening Sun. I watched as he walked back into the city, towards that great sphere until just the sparkling mist if that blue robe glittered faintly. And as I looked, it seemed to me that glittering wafted upwards, climbing to the glowing blue sphere that now cast a soft blue glow over the city’s heart…