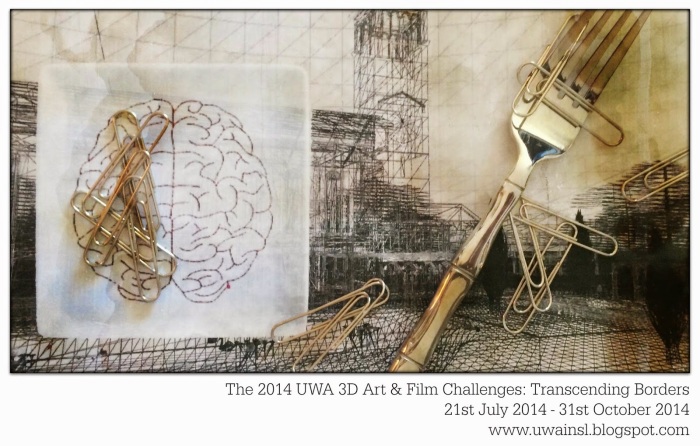 On Sunday, December 14th, 2014, the Grand Finale of the University Of Western Australia’s (UWA) Transcending Borders was held at the impressive UWA-BOSL Grand Amphitheatre. During the event, over L$1,000,000 was awarded in prizes to artists, machinima makers and those who took part in the audience participation competition. With some last-minute additions to the prize pools, and some additional special awards, the event was a very special celebration of artistic expression in Second Life.

Transcending Borders challenged entrants to interpret the title of the competition in any fashion they deem applicable, and produce a 3D artwork (in no more than 150 prims) or short film based on their interpretation, be it on transcending borders of space and time, love and loss, nationally or culture or language, or the real and the virtual, and so on. The result was a glittering array of 67 artworks and 38 machinima, representing a broad diversity of interpretations of the theme.

The Grand Finale was hosted by the UWA’s Jayjay Zifanwe, with the UWA’s art curator, FreeWee Ling also on hand to announce the special Curator’s awards in both the art and machinima categories.

In the first part of this report, I covered the awards for the Transcending Borders 3D Art Challenge. Here, I review the winners in the the MachinimUWA VII Transcending Borders Challenge, in which machinima makers could submit as many films on the them as they wish, as long as each entry had been specifically filmed for the Challenge, and should preferably run for around 4 minutes 30 seconds (although this latter point was not a “hard” rule.

Alongside the “main” challenges focused on artists and machinima makers, Transcending Borders included two audience participation competitions. Anyone who was not on the official judging panel was invited to provide what they thought the top 10 would be as decided by the actual panel, and those with lists which most closely matched the final list of prize winners as determined by the judges, would receive a special prize.

And the winners were:

Commenting on the machinima audience participation competition, Jayjay said, “No tall order to attempt to participate in this challenge, as one had to watch all the machinima [38 entries].
Quite amazing, as all the top 3 correctly predicted 8 of the top 10 [as determined by the judge’s votes].” He went on to note that of these five individuals, three had been in the top five of the last art Grand Challenge, perhaps showing that there was something of a science in how the winners make their selections.

For Chic Aeon, the audience participation prize was the start of a remarkable part of the evening, something she shared with Haveit Neox.

Note that SLurls are given with the titles of all winning pieces, and all the entries into the MachinimUMA VII Transcending Borders challenge can be seen on the SL Artist website.

As there was a tie for 4th place, there was no individual 5th place prize winner. Instead, the top four prizes in the MachinimUWA VII Transcending Borders challenge were awarded as follows:

Jayjay had contacted Tutsy ahead of the event to inform him he had won a prize, but due to Internet issues, Tutsy could not remain connected to Second Life for the event. Instead, a short speech he had prepared ahead of time was read out by his friend, Yoon.

Transcending borders in and with a movie is less tough than transcending the borders of a contest itself.  A work of NicoleX was refused because it conflicted with the UWA borders. I do regret the work has been refused, it shows the limits we have to deal with sometimes.
Yet we also cannot be deaf and blind for using our freedom of expression with a sense of awareness for the consequences. When input and output become disproportionate, other
solutions are needed.

Therefore again, many thanks to both UWA and all people that participated with their movies and opinions. And I am secretly proud as well a tiny little bit, thank you all!

In addition to the top ten awards, the Grand Finale included a number of special awards, both from the MachinimaUWA VII Transcending Borders challenge and also from the 2014 Project SciFi, which the UWA partners.

Commenting on her choice, FreeWee said:

For the machinima curator’s prize there were several entries that included artwork from current or past UWA shows. Some were focused specifically on a single piece or two, some incorporated art as a background to their narratives, and some had only a brief sighting of a work. I was looking for machinimas that most effectively used the artwork to tell the story of the film. The films that did that best seemed to be those by the 3D artists themselves. Among those, there was one film I thought was most engaging with the 3D art being essential in telling a story.

Mention was also made of the two SL-based machinima which had also received prizes inthe 2014 Project Sci-Fi competition. This event was judged by a jury entirely separate to that of Transcending Borders.

Congratulations to all the winners.

As with the first part of this report, I would again like to extend my personal thanks to both Jayjay and FreeWee for the incredible amount of work they do in the promotion of virtual world art and the potential of virtual worlds. Transcending Borders is not only a fitting theme for a UWA Grand Challenge, reminds us that both Jayjay and FreeWee help artists, educators, students and virtual worlds enthusiasts transcend the borders between the virtual and the physical each and every day.