Described as being something of an interim release pending the next full release, the update sees the viewer maintain parity with the Lab’s code base (3.7.23). This means it should have recent Lab-driven updates such as the latest maintenance fixes. There’s also a number of tidy updates and tweaks as well.

The headline update on the Alchemy blog is the inclusion of FMOD Studio, which “provides the latest in 3D audio in gaming”. I didn’t in all honesty noticed that much of a difference switching between the same music stream while swapping between this release of Alchemy and the official SL viewer; but doubtless there is additional work under the hood to eliminate bugs and issues, and I believe the update may be offered as a contribution to the Lab.

The Transaction Log is likely to be handy for those receiving regular indirect payments. Transactions are recorded across the current log-in session, and when I pulled an old tip jar script from inventory and dropped it into a prim cube, the log immediately recorded payments from my Alt just fine. Received payments are recorded in terms of time, name of payer and amount, and each can be ordered in ascending / descending order.

I’m not entirely convinced of the new Flycam icon, mainly because the “usual” button found at the bottom of the screen worked just fine, so this seems to be a change for change sake, rather than for any definable improvement. However, this is purely a personal observation, and the new icon appears in the top right corner of the status bar when the Flycam capability is in use with a Space Navigator.

Alongside of these changes, the release notes for the update offers bullet points on the remaining updates in the release, and the bugs which have been addressed. Rather than repeat things here, I’ll leave it to those interested in the viewer to take a poke at them.

One thing very worth the mention is that Linux users get a special treat with this release, as with it, Alchemy supports 64-bit Linux distributions.

And interesting, lightweight release (no bad thing given all the Christmas excesses people have been enjoying!), which probably hides a lot more work under the hood than is at first apparent. I’m curious to see what is in store with future releases for machinima makers and photographers, as it certainly sounds as if the Alchemy devs are cooking something up there. But in the meantime, this update should help keep Alchemy users happy.

It’s time to kick-off the final week of story-telling in voice for 2014, as  brought to Second Life by the staff and volunteers at the Seanchai Library.

As this is the week sandwiched between Christmas and New Year, activities are slightly different to the usual schedule, with the Library being dark on News Year’s Eve and New Year’s day, so staff can spend time with their families. Things will get of to an early start in 2015 with a special session on Friday, January 2nd.

In Rehabilitated, Jack Heimelmann is a high school drop-out with something of a drinking problem and a mediocre life on the road to nowhere. Then Peer Ambrose takes Jack under he wing, assigning him to “the Mission”, operating an elevator and seeing the on-site psychologist to rid him of his drinking problem. The He’s asked to emigrate off-planet…

Narrow Valley sees a native American Indian use a shamanic incantation to cast a spell over his 160 acres of land to discourage tax collectors and other interlopers from coming to bother him or lay claim to it. All goes well for him and his son until the Rampart family arrive, determined to lay claim to the land … 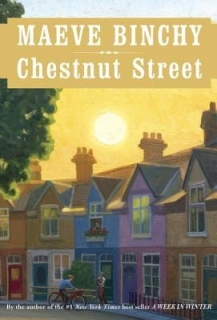 Maeve Binchy, journalist, columnist, playwright and author, began her writing career by accident, thanks to her father sending the letters she wrote to him while on a kibbutz in Israel during the 1960s to a local paper in Ireland, which subsequently published them. This in turn led to her being offered a job with The Irish Times on her return home, thus starting her on the road to becoming one of Ireland’s most successful and internationally recognised writers.

Through her career, she would often jot down short stories about an imaginary street in Dublin, where people would constantly come and go and experience the most diverse of times and situations. Once written, these stories would be put away for “the future”. That imaginary street was called Chestnut Street, located not far from the setting of her 2010 bestseller Minding Frankie. In 2014, these tales of the folk who live along, or visit that street were gathered together in a single volume and published posthumously under the title Chestnut Street.

Join Caledonia Skytower as she reads from her two December 2014 releases, Coffee Shop Talk and A Trio of Travelling Tales.

Please check with the Seanchai Library SL’s blog for updates and for additions or changes to the week’s schedule. The featured charity for November – December is Heifer International, which is working with communities to end world hunger and poverty and to care for the Earth. 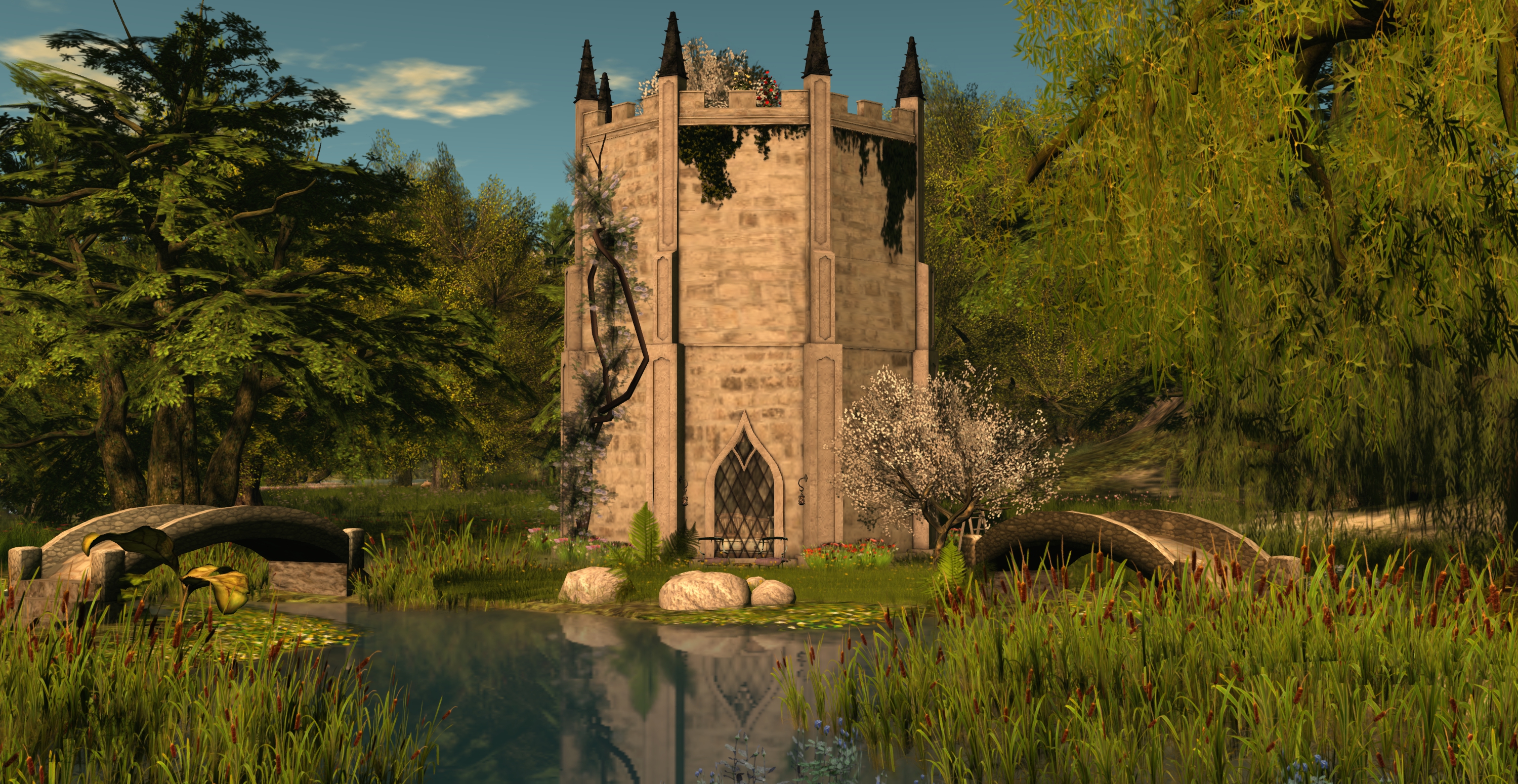 With the no change window in effect throughout the week, and running through until the 2nd week of January 2015, there were no server deployments to ether the main channel or the three RC channels during the last full week of 2014.

The Experience Tools RC viewer was updated on Monday, December 22nd to version 3.7.24.297643 (although the Alternate Viewers wiki page has yet to be updated). This saw the viewer brought up to parity with the current release viewer.

Early January 2015 should see the Windows and Mac viewer start to use the new viewer tools chain the Lab has been working on, and the updated autobuild process.One of the hopes with the Windows switch-over to Visual Studio 2013,  and the availability of Visual Studio Community 2013, is hoped that over time, many (or all) of the differences between the open source build configurations and the Linden versions can be eliminated, other than when using  proprietary packages.

Oz Linden has been working on the Linux side of things in order to get the Linux builds working with the new tools and gcc 4.6; he’s also actively soliciting for assistance from TPV developers for help in this.

Once the tools work is completed, it would appear that “avatar awareness” (aka “radar”) for the official viewer may well be heading towards the top of the list for new viewer capabilities, with Oz indicating he’d like to get to work on a specification for the capability. If not this, then quite possibly a further round of environment updates within the viewer, as noted in my week 51 report.

It is still not clear when the SL wiki will be re-opened for editing by SL users. According to Oz Linden, speaking at the Open-source Developer’s meeting on Monday, December 22nd, “every time they get close to finishing the QA, another batch of security problems comes out that we need to integrate fixes for.”

JIRA BUG-8100 has been raised as a feature request to provide an additional material map option alongside the existing diffuse, specular, and normal maps that allows a user to apply either a black and white map, or an alpha bit texture to mask out areas of a mesh and render them fully transparent (with a 1-bit edging). The JIRA has gained support and feedback from content creators (including the need for LSL from the outset, if implemented. Those interested / in agreement, should ensure they read the JIRA and WATCH it (remember, VOTE is not as strongly responded to by the Lab).

With thanks to Mona Eberhardt for the Open-source dev meeting notes and the BUG-8100 pointer. 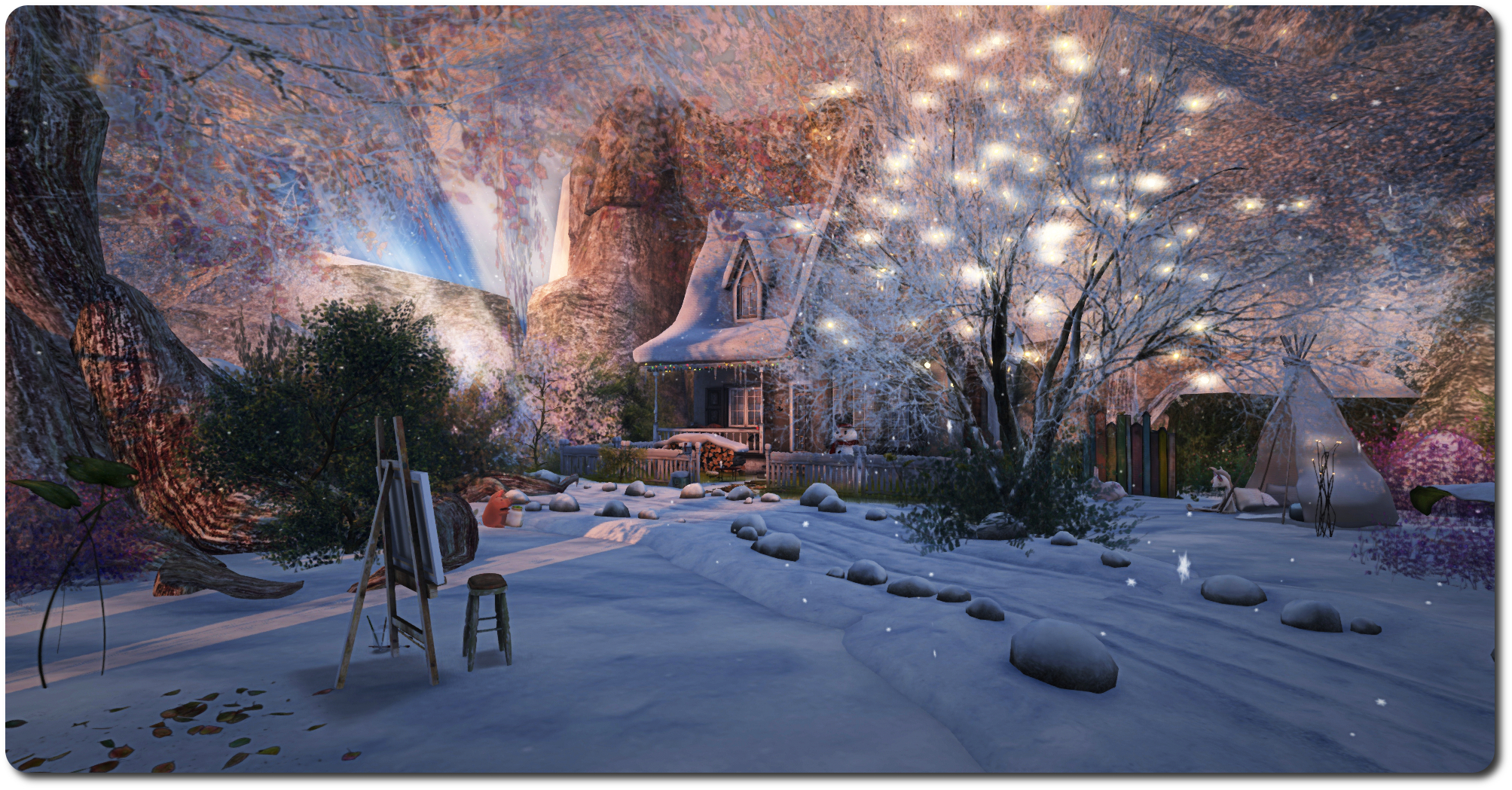 Lauren Bentham has brought a fairytale winter to Storybrooke Gardens, high over her Baja Norte region (which I last wrote about more than 18 months ago!). Snow falls across the garden’s trails and paths, layering them in a soft blanket as sunlight slants through frosted white branches of trees, and lanterns drift on the breeze.

Along the tracks and paths circling around and cutting through the gardens, a variety of animals and fairytale folk can be found, some sitting or standing on their own, others forming delightful vignettes, such as the little chipmunks gathered in a tiny field, or the bears and raccoons looking like they’re trying to deal with the excesses of Christmas one way or another. 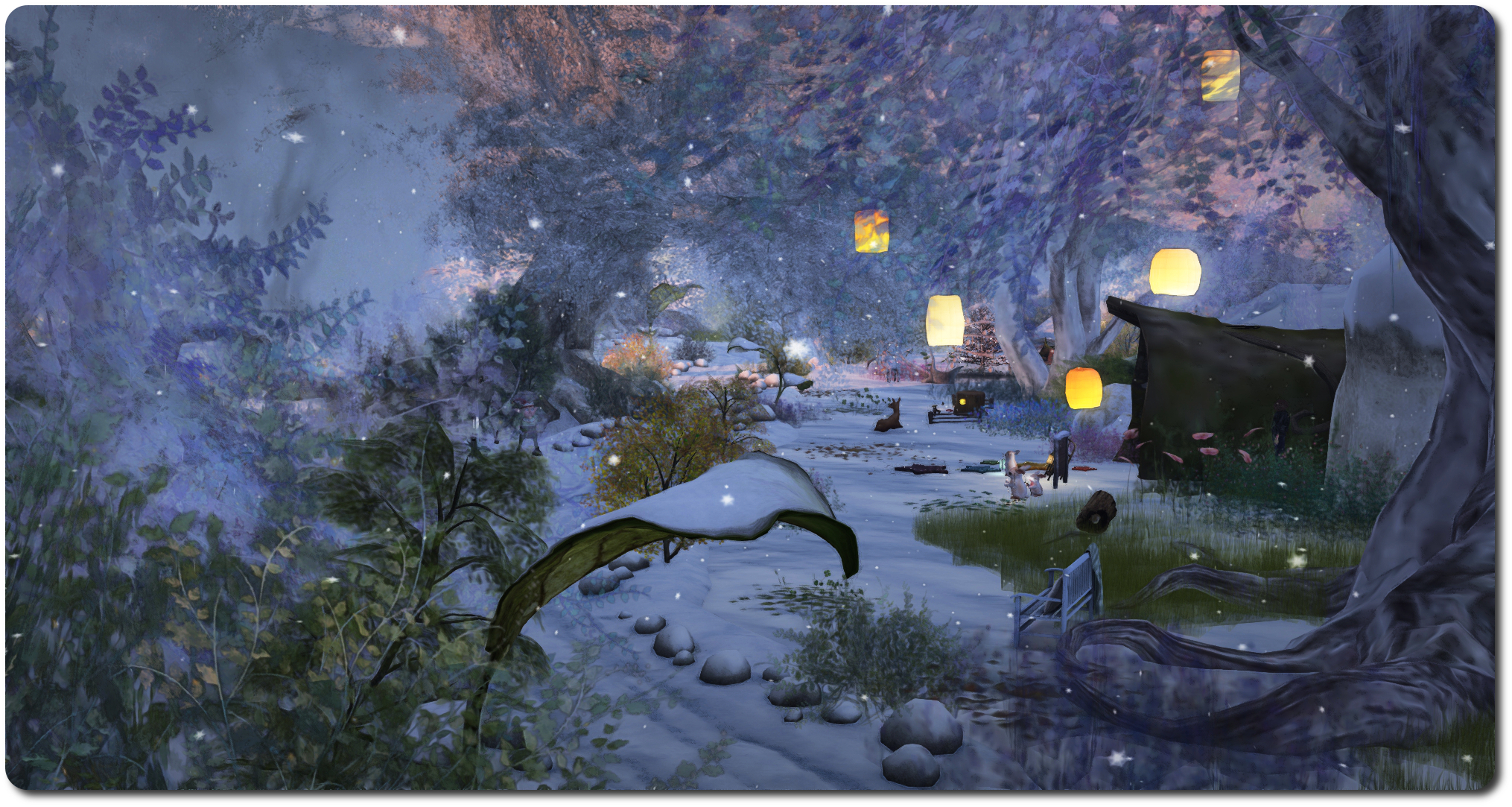 There is a wonderful attention to detail here; so much so that a casual visit may not reveal all there is to see. To help you take everything in, there are a number of places to sit, either on your own or with a companion, if visiting together.

Tucked away in the south-east corner of the gardens is a little snowbound cottage which is more than likely a photographer’s delight (I confess to snapping it from several angles and then having a play around in GIMP, as shown in the topmost image here). Nearby, and whom you might encounter first depending on the path you follow to the cottage, little fairy folk hover around bright hued mushrooms across the road from a little camp site … 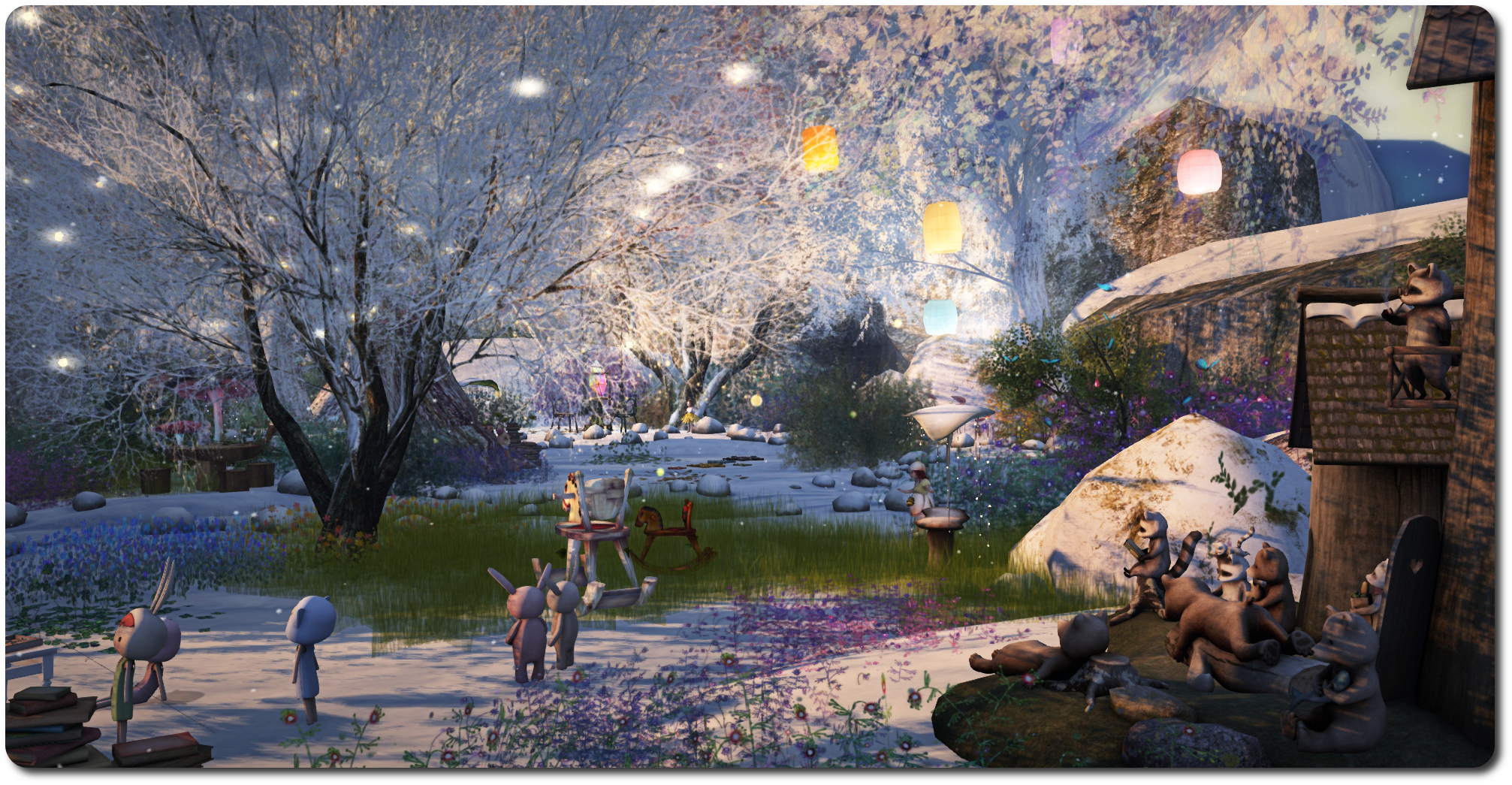 If you are still seeking a little P&Q after the excess of Christmas, real or virtual, Storybrooke Gardens might be just the ticket.