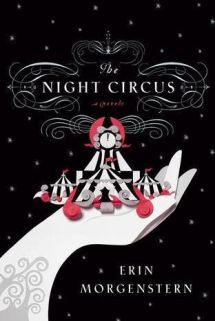 Caledonia Skytower reads selections from Erin Morgenstern’s 2011 tale about a circus that suddenly arrives without warning. One day a field is empty, the next the circus, with big top and paraphernalia is just there. Called Le Cirque des Rêves, it is only open at night and offers visitors a unique experience full of breathtaking amazements.

But behind the scenes, lies a fierce competition – a duel between two young magicians, Celia and Marco, who have been trained since childhood expressly for this purpose by their mercurial instructors.

Unbeknownst to them, this is a game in which only one can be left standing, and the circus is but the stage for a remarkable battle of imagination and will. But Celia and Marco tumble head-first into love – a deep, magical love that makes the lights flicker and the room grow warm whenever they so much as brush hands.

True love or not, the game must play out, and the fates of everyone involved, from the cast of extraordinary circus per­formers to the patrons of the circus, hang in the balance, one as precarious as the swings used by the acrobats who entertain without a net.

Dispatched on a mission of exploration, the Earth ship Discipline, operated by the the all-powerful State, encountered a strange phenomenon: a torus-like ring of gas and dust surrounding a neutron star. Within the torus, the crew discover a thriving ecosystem of plant and animal lifeforms that have evolved to living continually in a state of free-fall.

Despite being overseen by the ship’s AI system, Sharls Davis Kendy, from which they received advice and information, the crew abandoned the Discipline in favour of living among the plants and trees of the torus, which they call the Smoke Ring.

Now, 500 years later, the descends of the original crew have formed a tribal society focused around some of the trees of the system. Adapted to free-fall life, their societal structures are sharply divided, with “wars” common among them, as well as stronger tribes raiding or enslaving weaker tribes, whilst in all of them, artefacts from the original mission are sought-after and venerated.

In the midst of a round of aggression between various tribal factions, one group find themselves aboard an original craft from the Discipline and caught in space beyond the Smoke Ring, where the Discipline and Kendy are still waiting – and Kendy is willing to provide assistance.

Former Scout Jen Sin yos’Phelium, recalled by Korval to serve the Clan, is ordered to discretely deliver a packet to Clan Sinan on Delium. It sounded easy enough, other than the fact that Clan Sinan was having trouble with their allies – a situation that puts Jen on edge and determined not to see the delivery leave him getting separated from his ability to remain alive.

Unfortunately, things do not go well, and Jens is forced to make an emergency star jump, his ship under threat. He finds himself arriving near the deserted Tinsori Light station. With his ship damaged and rescue dependent on his survival, Jens must board the station. In doing so, he discovers Old Tech, a reminder of the Legacy Systems left over from previous wars. Nor is that all, as he discovers the station might be haunted…

Deep beneath the surface of the Earth and upon the shores of the Starless Sea, lies a network of tunnels and rooms filled with stories and tales. The ways into this secret place are many, but hidden, and perhaps set for just one individual to find. They exist where least expected: on the floors of forests, behind doors inside private homes or around alleyway corners or within mountain caves – almost anywhere in which they cannot be anticipated.

Zachary Ezra Rawlins is searching for his door, though he does not know it. He follows a silent siren song, an inexplicable knowledge that he is meant for another place.

When he discovers a mysterious book in the stacks of his campus library he begins to read, entranced by tales of lovelorn prisoners, lost cities, and nameless acolytes. Suddenly a turn of the page brings Zachary to a story from his own childhood impossibly written in this book that is older than he is…

Myths and Legends with Shandon Loring. Also in Kitely – grid.kitely.com:8002:SEANCHAI).

While visiting JimGarand’s Grauland in January 2020 (see: Grauland’s touch of Japanese Zen in Second Life), I was struck by the zen garden included within the region design. An examination of the core elements in the design revealed them to be from the Zen Garden Building Set by Alex Bader, sold under his Studio Skye brand.

Alex has a reputation for producing excellent landscape building kits – and I’ve used several in constructing places like Holy Kai, although there are admittedly some that while mouth-watering in terms of my desire to put them to good use, such as his stream building sets, I simply haven’t (thus far) had the space in which to do them real justice. However, the Zen Garden kit was one that I immediately had a familiar “me want!” itch about, so that after a couple of days of pondering how it might work within Isla Pey, I snagged a copy from the Marketplace. And I have to say, it is simply superb.

At L$899, the kit includes some 24 individual elements: rocks, gravel surfaces, gravel path sections, plants, shrubs, ground cover, ground pieces, stone steps, edging pieces (combinations of rocks and plants), and so on. All of this offers a comprehensive means to build a garden network of paths, plants and open spaces, which can both be used to provide places to sit or include additional features as well as being easily integrated into a broader landscape.

In addition, for those who might be daunted at the thought of trying to glue everything together themselves, Alex provides two “pre-built” and rezzer based examples of gardens: one 32m on a side (96 LI when rezzed) and the other 26x18m (46 LI). Also, a couple of textures are also provided for the purposes of blending any additional items – fillers and the like – that might be required to ensure a good pairing of garden to surrounding landscape elements.

Given they are “ready to go”, so to speak, the two example gardens are a good place to start with a design. As they are supplied in rezzers, also that’s required is a couple of clicks with the rezzers, and they can be put together in moments and the rezzer then used to position them as required. Just click the Finish option once placed, remove the rez box and then modify or extend the garden or blend it with a broader landscape using both the additional components in the kit and whatever else you have that you feel might work with it.

I opted to take this approach myself, using the 32mx32m garden as my starting point. To this I added some of the base, path and edge pieces to provide a basic design (one which currently uses the garden’s featured rock monolith seen in the photos here, although I’m debating swapping that out and creating a “formal” element common to zen gardens: an area of sand raked to resemble ripples on water). To this I added our selection of sculptures by Ciottolina Xue and Silas Merlin, plus trees by AzaleaBluebell originally offered as a Fantasy Faire hunt gift, together with a selection of shrubs to provide more of a garden feel.

There are some additional nice touches with the set, together with a couple of “does” and “don’ts”. For example, the water elements include a volume control for adjusting / changing the sound being generated by their little falls. The edges of the individual paths are nicely “feathered” so that path sections can be more easily placed together and blended. Also, the kit is compatible with the Studio Skye 4-Seasons bolt on – although this is where the “don’t” comes into play. If you do plan to use season changing bolt-on, don’t link elements of the garden together, as doing so will adversely affect how textures get applied when changing the seasons.

Also, do take care should you vertically resize elements (e.g. so the base better connects with whatever is under it): many of the pieces have horizontal faces painted as edge cover, and resizing can leave these “floating” above the rocks / pathway section on which they are supposed to be growing, or no longer aligning with edges they are supposed to be draped over.

But, as noted at the top of this piece, this is a minor niggle. For those looking for a different look to their garden – one that can be unique to them whilst leveraging other plants and garden items they have, the Studio Skye Zen Garden Building Kit makes for a excellent purchase.

Note: the statuary, trees, large bushes and benches seen in the images here do not form a part of the Zen Garden Building Kit, but have been purchased separately.