Also within the release are a couple of performance improvements:

Quests are seen as a means of generating user engagement within experiences. A basic system – available only to the lab – has been used to provide a flavour of quests / hunts in places like the Sansar Social Hub, but which offer Sansar Dollar rewards.

The new quest system provides an new quest authoring tool directly to experience creators, however there are some key points to note about this first release:

How quests might be used is down to individual creators. Ideas include:

Obviously, some of these will be more likely to be attractive to users once the rewards system has been added – and may well require more that 3 rewards in order to maintain focus / interest  – and this is something the Lab have indicated they would be willing to review in the future. But even without a reward system, the deployment of the quest system offers creators the opportunity to play with the tools and gain familiarity with them.

The quest can be tested by the creator in the unpublished scene (by building and saving the scene), and it becomes public when the scene is published as an experience.

There is Lab-supplied documentation on making quests and assigning objectives. the following is a simple overview of the basics.

There are three parts to creating a quest:

Save the quest when done. 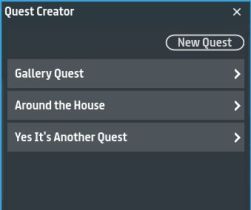 The Quest Creators records all quests you have created. To edit a specific quest (e.g. to add / change objectives):

Defining Objectives for a Quest

Note that when you create a new quest, you will automatically be presented with the option to add objectives to the quest – and you can have as many objectives in a quest as you require.

Select the required quest (if not already selected) > make sure Objectives is selected (default) > Click New to display the objective fields.

Save the objective when done.

Adding Objects as Givers and Objectives in an Experience

Basic steps: edit the experience scene in which the quest will appear > add and place an object as the quest giver. Then:

To test a quest in a scene:

A simple, easy-to-understand system (easy enough for me to understand!) with some built-in complexity (see the associated scripting documentation) and with a lot of potential for expansion. As always, check the official documentation for full details on the capability.