A symbiotic X-ray binary of an ageing red giant (l) and relatively young neutron star (r – not to scale). Interaction between the two may have helped the neutron star to be “come back to life”.

Astronomers have witnessed an extraordinary stellar event – a star “coming back to life” thanks to its nearby neighbour.

The two stars are from different points in the stellar evolutionary process. The “dead” star is a neutron star, all that remains of a massive star  – possibly with 30 times the mass of the Sun – which ended its life in a violent explosion, leaving whatever matter was left so densely packed, a sphere of the material just 10 km (6.25 mi) in diameter could have a mass 1.5 times that of the Sun.

The “donor” star is a red giant. This is a star similar to the Sun which has reached the latter stages of its life. With the hydrogen in its core exhausted, the star has swollen in size as a result of heat overcoming gravity, and has begun thermonuclear fusion of hydrogen in a shell surrounding the core. When this happens, the star sheds stellar material from its outer layers in a solar wind that travels several hundreds of km/sec.

In this particular case, the two stars – red giant and neutron – form what’s called a symbiotic X-ray binary system – one of one 10 such binaries of this kid so far discovered. There are also some oddities about this particular pairing which makes it somewhat unique. For one thing, while most neutron stars spin at several rotations per second, the neutron star in this pairing takes around 2 hours to complete one rotation. In addition, this star has a much stronger magnetic field than is usual for neutron stars, suggesting it is relatively young.

The “re-animation” of the neutron star occurred in late 2017, and is the subject of a paper published in the Journal of Astronomy and Astrophysics. It was spotted by the European Space Agency’s  INTEGRAL mission on August 13th 2017, which detected high-energy emission from the dead stellar core of the neutron star. These emissions were quickly picked-up by other observatories, such as ESA’s  XMM Newton observatory and NASA’s NuSTAR and Swift space telescopes, and a number of ground-based telescopes, confirming the event.

Its discovery has prompted two main questions: what exactly happened, and how long will this process go on? In answering the first question, astronomers believe that as the neutron star is relatively young, it rate of rotation may have been held in check by the solar wind from the red giant. Over time, the interaction between the red giant’s solar wind and the neutron star’s magnetic field resulted in ongoing high-energy emissions from the dead stellar core.

As to whether this it a short-lived phenomenon or the beginning of a long-term relationship, Erik Kuulkers, ESA’s INTEGRAL project scientist, notes:

We haven’t seen this object before in the past 15 years of our observations with INTEGRAL, so we believe we saw the X-rays turning on for the first time. We’ll continue to watch how it behaves in case it is just a long ‘burp’ of winds, but so far we haven’t seen any significant changes.

So for now, we’ll just have to wait and see.

This means, for example, that the space station, which operates at an altitude of 400-410 km  (250-256 mi) is operating within the thermosphere, and despite the tenuous nature of the atmosphere at that altitude it is subject to drag which requires it periodically boosts its orbit. This atmospheric drag also extends to low-Earth orbit satellites (which operate up to 2,000 km (1,200 mi), requiring they also periodically need to adjust their orbits. The problem here is that while the ISS can be refuelled – satellites in low-Earth orbit have finite supplies of fuel they can use, which can limit their operating lives.

Now – in a world’s first – the European Space Agency has tested an electric thruster was can ingest scarce air molecules from the thermosphere as fuel, potentially allowing satellites in very low orbits around Earth to have greatly extended operating lives.

A test version of the air-breathing thruster (technically referred as Ram-Electric Propulsion) was recently tested in a vacuum chamber simulating the environment at 200 km altitude. In the test, the thruster was initial fired using xenon gas – a common fuel supply for electric thruster systems – generating a distinctive blue-green plume. A “particle flow generator” was then used to simulate the influx of rarefied air molecules into the thruster system as if it were moving in orbit around Earth, causing the exhaust plume to turn a milky-grey – a clear sign the thruster was burning air as propellant, rather than xenon.

Once the initial thruster burn was completed, the thruster was shut down, purged and than restarted a number of times only using the air molecules provided by the “particle flow generator”, proving the engine can be successful fired – and fuel – by upper atmosphere trace gases.

The test firing is the culmination of almost a decade’s worth of research into electric thruster systems. While there is still a way to go before it is ready for practical use, the approach has the potential to benefit more than just low-Earth orbit satellites.

With minimal adjustment the system could in theory be adapted for use on satellites intended to operate in orbit around Mars or even Titan, both reducing the amounts of on-board propellants such a vehicle would require and increasing the mass allowance for science systems.

END_OF_DOCUMENT_TOKEN_TO_BE_REPLACED 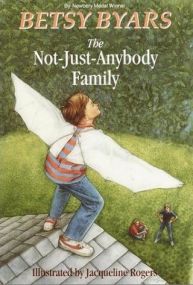 When Junior Blossom wakes up in the hospital, his last memory is of crouching on the barn roof with cloth wings tied to his arms, and of Maggie and Vern in the yard below, urging him to fly. That had been just before Junior spotted a police car approaching the farm in a cloud of dust.

Meanwhile Pap, the children’s grandfather, sits in disgrace in the city jail. He was arrested for disturbing the peace after his pick-up truck accidentally dumped 2,147 beer and soda cans on Spring Street.

With their mother away on the rodeo circuit, it’s up to Maggie and Vern to find a way to rescue Pap and Junior. How will they solve their family problems?

Join Caledonia Skytower at the Golden Horsehoe for this Magicland Storytime reading of this Betsy Byars classic.

An original story by Aoife Lorenfield.

Released in 1952, John Ford’s The Quiet Man is regarded as a classic Irish-American romantic comedy / drama. Starring John Wayne, Maureen O’Hara (and assorted members of their RL families!) and Barry Fitzgerald, it is a popular choice among critics and film-lovers.

The screenplay for the film was drawn in a large part from a short story of the same name originally published in 1933 in the Saturday Evening Post, and penned by Irish author, Maurice Welsh. Together with a number of other short stories by Walsh, The Quiet Man was gathered into a single volume of his short stories, The Quiet Man and Other Stories, which dealt with many recurring characters living in rural Ireland of the 1920s, and set against the backdrop of the civil unrest which affected the country at that time, while examining the complexities and occasional intrigues of life, love and Irish traditions.

Part 1 of a special series of events to mark Seanchai Library’s 10th anniversary. See here for the full schedule.

With Shandon Loring – arrive at the Library on Holly Kai early to teleport to the special setting for the event.

A special celebration at  Ceiliúradh Glen on Holly Kai  (in homage to Glens na hEirean in the old West of Ireland Estate).

12:30 Prelude to A Bagpipe Challenge

With Caledonia Skytower at  Ceiliúradh Glen followed at 13:00-14:00 by Beyond Loud – music with Elrik Merlin, Gabrielle Riel, and Ktahdn Vesivino broadcast on Radio Riel Main Stream.