Route 66 has been a popular subject for region designs in Second Life over the years, and one of the more recent is called Motorheadz Café / Route66, which Shakespeare alerted me to recently. Designed by ROCKET (Rocket Biedermann), this Homestead region immediately put me in mind of  Mother Road, which Caitlyn and I visited in September 2017 (see here for more). Such is the similarity between the two, one might easily be the neighbour to the other.

Bracketed to the east and west by mountains, the region is dissected by the titular road, alongside of which sits the landing point. Take care on arriving – it’s easy to step out on the road, and as you’ll find out, this actually has traffic passing along it periodically – cars, pick-up trucks, police cars – even trucks towing semi-trailers.

The road is straddled by a small township that seems to have grown up here as a result of pharmaceutical plant that apparently started operations in 1886. The security guard at the gate suggests it is still in use, but perhaps it is now more of a storage facility than anything (and part of it is off-limits to visitors).

This might explain why the rest of the town is looking somewhat run-down; without a place of work, many of the local inhabitants may well have moved on to pastures new; what’s left is a handful of roadside business – an auto shop, the titular Motorheadz Café, a couple of stores, a doughnut shop offering competition to the café, and a run-down motel which hardly lives up to its name: Miami.

Behind these, again on either side of the road, lay a scattering of houses and shacks. all of them looking more than a little run-down – but going on the cars parked outside of them, several are still considered home by the locals.

What makes this region a little different is the work that’s been put into making it appear to be “alive”. There are the aforementioned vehicles zapping along the main road, while scattered around the region are posed dummies. There’s nothing new in this – such characters often turn up in many regions; but rather than having such dummies individually placed – at market stalls, behind counters, etc., Rocket has brought them together in series of vignettes.

There’s the couple outside of the auto shop, for example, apparently waiting for the car to be fixed; while outside the motel, certain negotiations appear to be under way. Further afield, the local motorbike gang are gathering at their club-house, and so on – but check inside the café for the best example of bringing these characters together to form a little story. Cats are also much in evidence, doing the things cats do – including perching themselves in locations that are unexpected – but typically cat-like.

Motorheadz Café / Route66 may not appeal to everyone, but I admit to finding it with its own charm. With rezzing open (5-minute auto-return), it makes an ideal environment for photographers looking for a more unusual backdrop, particularly if “extras” are needed. There’s also opportunities for photos in other parts of the region: alongside the train tracks, out in the fields, etc.

The following notes are taken from the Web User Group meeting held on Wednesday, March  28th, 2017.

These meetings are generally held monthly on Wednesdays, and are chaired by Alexa and Grumpity Linden at Alexa’s barn. The focus is the Lab’s web properties, which include the Second Life website (including the blogs, Destination Guide, Maps, Search, the Knowledge base, etc.), Place Pages, Landing Pages (and join flow for sign-ups), the Marketplace, and so on and the Lab’s own website at lindenlab.com.

A point to remember with the Web User Group meetings is that they are informal discussions on things like the Marketplace.

While the Lab does give information on the work they are carrying out, plans they have in-hand for updates to web properties, etc., equally, a lot of what is discussed is ideas and the taking of feedback from attendees, and should not necessarily be regarded as statements from the Lab as to what will happen, it priority, or anything else.

Within these reports, I try to indicate those plans / actions / projects that are in progress, and offer a differentiation between “firm” plans and ideas under discussion.

Further development of Place Pages is planned, with one of the first added features, possibly appearing in the near future, is support for land auctions, offering the same functionality as the current auctions. This will be expanded over time to offer resident-to-auctions.

Issues around Governance, the Marketplace and the DMCA process continue to be raised.

Often at user-group meetings questions are asked around matters of governance or which may be related to legal / financial issues (e.g. fraud or alleged cases of fraud). All of these matters are overseen by teams outside of the technical personnel who attend the in-world meetings, and so – while it may be frustrating for those raising the questions – cannot comment on or address such issues.

There are discussions at the Lab about holding a Support / Governance user group in the future. There is currently no date as to when this may take place, or whether, if it does, it will be a one-off or one of a series. However, once the dates have been established, it will be announced through channels such as the User Groups wiki page.

Currently, the Lab’s Infringement Notification Policy requires that DCMA notices are filed with Linden Lab via mail or fax.In December 2017, it was indicated that this would be revised so that DMCA’s can be filed via an on-line form. The provisional date for implementing this change had been around January / February 2018, however, it has been subject to delay.

Oz and Grumpity Linden indicated the reason the form has yet to be deployed is twofold:

It is hoped that form will be available in the near future. 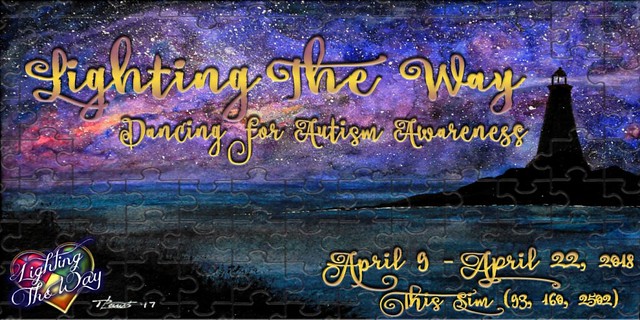 From the Wikipedia entry on Autism:

Autism is a developmental disorder characterised by troubles with social interaction and communication, and by restricted and repetitive behaviour. Parents usually notice signs in the first two or three years of their child’s life. These signs often develop gradually, though some children with autism reach their developmental milestones at a normal pace and then worsen.

SouthernComfort Magic (SoCo) organises and runs the Lighting The Way series of events as an awareness campaign for Autism, and here’s the announcement:

The past three years, the Lighting The Way Organisation within Second Life reached out to the dance community to take part in a weekend filled with dance and music for Autism. We have had such a huge response to this that we began running out of time slots. So this year, we will be having it on two separate weekends with many events running during the week. This year we will also have sponsors and business owners on the sim as well advertising their items.

Not only are dance teams invited, but individual dancers and choreographers as well. We will have 2 variety shows during the 2 weekends. We will get everyone and anyone involved in raising awareness that would like to be a part of it.

Now, with that being said…. I would like to personally invite you to come and participate in this wonderful event. What I am hoping to accomplish again this year is for dance teams all over Second Life as well as individual choreographers/dancers to come together and perform for Autism.

That’s the TL;DR, but I want to learn more about the Lighting The Way event. What is it that got SoCo into raising awareness for Autism? 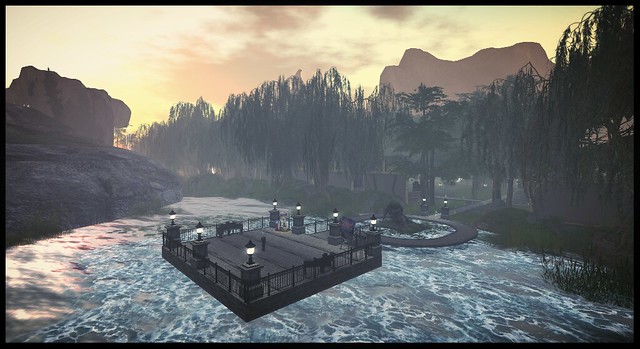 Soco teleported me over to the Lighting The Way build, which consists of a beautiful forest glade, a path that winds through rows of booths for event partners to show their support, and a performance stage with plenty of room for audience members to enjoy the shows.

(I felt a sense of accomplishment navigating around the water and fountain near the landing area, but SoCo told me that she’d put a transparent prim over the area to keep people from falling in.)

I asked her why she started Lighting The Way in Second Life.

“The reason I started Lighting The Way was because of my two children,” she says, “whom both are on the autism spectrum. It was during this time I craved a means in which I could play an instrumental role in lighting the path from darkness for people who were diagnosed autistic.  My son suffers from the most severe form of autism while my daughter has the milder form known as Aspergers, so I decided to utilize SL as my platform for building awareness.”

“When my son was diagnosed with Autism at the age of 2, Autism affected 1 out of 150 children. Today it affects 1 out of 68 (1 in 42 boys). Over the course of 11 years, I have watched my son go through changes that I would never wish upon anyone. However, he is the most lovable child that I have ever known, he is truly an angel from heaven. He has taught me more about life & the person that I want to be more than I ever thought possible.”

So the next time You are at a restaurant or at a mall & You happen to see a child throwing themselves down on the floor, screaming and/or shaking things, stop & think before You judge. Not all disabilities are easily seen.  Sometimes all one might see is the symptoms & without knowing the full situation, You’re judging someone incorrectly & unfairly.

Where did she get the name “Lighting The Way” ?

“I needed to have an official name for raising awareness and I thought of a lighthouse,” she said. “It was strong, firm, always there, it’s beacon shining brightly for those who were lost. So I incorporated that into this event. We all come together to stand firm to help light the way for those on the spectrum.”