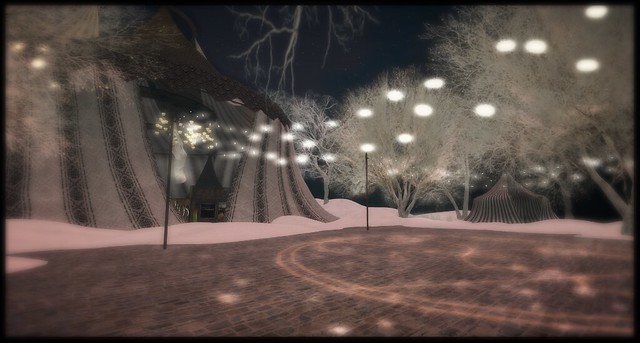 Where do I begin with Idle Rogue and the Guerilla Burlesque group that performs there? They were the first group I saw performing in Second Life, although I should have seen them sooner if I hadn’t have been such a lazyass with all those invitations, oh, how I regret my foolish ways!

When I was listening to Grace McDunnough perform at After Dark, why did I not cam around the sim and see that theatre and get curious? Is Grace that mesmerizing with her sweet, dulcet tones?

Damn you! Damn you and your sweet dulcet tones, siren! The path of my life is paved with the cement of regrets and tears.

But let us not live mired in sorrow, but look to the future. And in Idle Rogue Production’s future we see their upcoming show Cirque du Nuit:

Idle Rogue Productions are presenting the very successful Le Cirque de Nuit again this Easter, with performances at 7pm on March 30th, 31st and April 1st , and a matinee performance at 3pm on March 31st.

Directed by Blaze DeVivre, with the assistance of Sho Kyong, and produced by chryblnd Scribe, this year’s production will feature new acts, new dancers, new art installations and perhaps a little something we haven’t done before.

Billed as “a steampunk circus in black and white”, Le Cirque de Nuit pays loose homage to The Night Circus, a novel by Erin Morgenstern, which tells the tale of an enchanted circus traveling the globe during the Victorian era. Our production features dance acts with themes of circus, illusion and steampunk, and the strictly black-and-white acts are interspersed by colourful art installations from Second Life artists and musicians.

This production debuted in 2014 and has since presented some of the most innovative dance creations in Second Life. It is beloved by all who have seen it, with its breath-taking special effects and an elegant ambiance you will not forget.

The opening night performance on March 30th will be exclusive to members of the Guerilla Burlesque Exclusive group.

Bookings for the 2018 season of Le Cirque De Nuit open on March 22nd at 4:00pm. From that hour onward, you will be able to IM Saturday Melody in-world to add your name to the allocation list, time stamps will ensure bookings are processed fairly. Leave a message indicating your first and second performance preferences and the names of those in your booking. Be sure to check the Auto-response message that will be generated when you open Saturday’s IM for updated details for any scheduling changes.

The sim will be locked to all but those whose names are on the access list at each show, unless the seat limit of 40 guests total is not filled, at which time the sim will be opened for general audience intake. Please allow for the Linden Lab limitation of 10% of the avatar limit (5-10 avatars)held for premium memberships. While we will do everything within our capacity to ensure you can access the sim on the night you have booked, please note this arrangement is a courtesy only and no obligation is implied.

That’s the TL;DR, but I want to know more. What is Idle Rogue about and what do they do there? What’s the appeal of Cirque du Nuit and how are they going about to create this in Second Life?

DIRECT ME TO THE DIRECTOR…

Blaze DeVivre is directing this year’s Cirque de Nuit, and she teleported me to the build in-progress to talk. 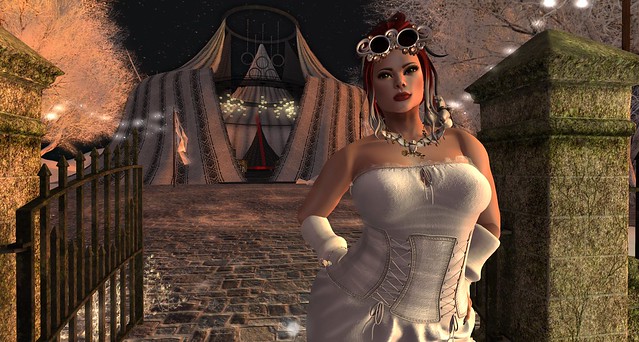 Beyond the wrought-iron fence and gates at the landing area, a gigantic big-top tent with the stage and seating was coming together. Underneath the stage, artists were loading their interstitial builds for the production.

Before we got into Cirque de Nuit, I pretended not to know what Idle Rogue and Guerilla Burlesque are, despite shooting photos of them for over a year and getting to know the performers, just so we could start off with a good introduction to this interview.

“Guerilla Burlesque started as a troupe of dancers who would do back-up for live performers in SL,” said Blaze, playing along. “Idle Rogue has always had a live music component to it, and Cherry managed some performers, then brought her two loves, dance and live music together. They started doing dance shows around the time I was rezzed, wanting to expand on the fledgling Virtual Burlesque movement that came about at that time.”

Where did Blaze get her start in all of this?

“I was going to events at IR before performing with GB, enjoying many good laughs and fun nights from DJs to live music. Early on, I got hooked up with the Aussies because I am a night owl. I lurked at their shows for about a year before I found out they were auditioning for new members. I had always had in interest in dance and particularly burlesque but not the ability to make it happen in RL, besides it is way better in here (and cheaper to create).”

Because I was working on a not-so-to secret project of a dance performance to demonstrate to y’all how easy or hard it is to do, I asked Blaze was it hard to learn dance performance? And, more importantly, how fun is it?

“it was hard. I had a steep learning curve in SL since I did not come from a gaming background, it was all new to me, but that difficulty was exactly what kept me coming back. The ability to create something here that was a composite of my love of visual art and music just grabbed me like no other art form ever did.”

“I have created with many media outside of the digital. I worked a lot with fibres and collage, very texture based sensory. I had been an art major at one time, so all the usual drawing and painting as well. I think it is that love of collage that translates best to SL, finding all the bits and pieces, from animations to props and costumes and gluing them together to make acts.”

END_OF_DOCUMENT_TOKEN_TO_BE_REPLACED

On Tuesday, March 20th, Linden Lab deployed the mid-March Sansar update. This release builds on some capabilities added in recent Sansar updates, but also sees the removal of some functionality.

The release notes provide full information on the new features, updates, documentation changes and resolved / known issues within the release. The following is a general overview of the update’s key changes.

Recently, the Lab added a new Events page to the Web version of the Sansar Atlas. With the mid-March release, a similar option has been added to the Sansar client, as well as the ability for Sansar experience owners to create and list their own experiences.

Displaying and creating events are both accessed through a new Client UI icon – the Calendar icon. On the Atlas display, this appears directly under the LookBook icon (see right), while within an experience it is located below the Atlas icon.

Clicking the icon will open the Events app.  This can display events in one of three ways:

Both Featured and All events are listed in date / time order.

Events are created by clicking on the Create An Event option in the Events app. This opens the Create Event panel. This is fairly self-explanatory, and all sections should be completed. Those needing detailed instructions should refer to Adding your events to the calendar in the Sansar documentation. However, there are some points that should be noted:

Starting with the mid-March release, Linden Lab is removing the terrain editor tool from Sansar. This is as a result of recent investigation in Sansar’s performance revealed the height maps created using the tool could adversely affect performance in both the Run-time and Edit modes. This means that as of this release, the terrain editor has been disabled, and:

Creators who have used the terrain editor  / height maps in their experiences are encouraged to remove / replace them between now and the end of April. From the end of April all such items will be replaced with a place-holder asset.

The Lab is offering to work with creators to ease the transition, and offer  notes on working with terrain using alternatives through third-party tools – Maya, World Machine, Terragen 4 and ZBrush 4R8.

The mid-March release adds the ability for scripters to offer script updates through the Sansar Store. Full instructions are provided in the Selling Items in the Sansar Store knowledge base article – but again, take note that at this point in time, updating items only applies to scripts (the article implies any item can be updated).

The mid-March updates bring a number of avatar related updates.

Two further avatar emotes (aka gestures have been added to Sansar:

Both are fairly self-explanatory. In addition. upper / lower body gestures can now be combined, so avatar can now dance and clap (enter /dance in local chat and then enter /clap). Such combinations can be done when running or walking as well.

The diagnostic tools added in the February release have been updated:

In addition two new options have been added:

Again for full details of the release, please refer to the release notes.