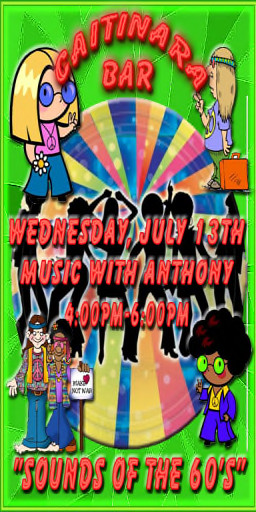 We occasionally like to mix things up at Caitinara Bar, Holly Kai Park, with special themed evenings where we invite our guests to have fun with a little dress-up as a part of our midweek Music With Anthony series.

On Wednesday, July 13th, we’ll be doing so again, with Sounds of the Sixties. For two hours from 4:00pm through 6;00pm SLT, Anthony Westburn  spinning out 2 hours of great music from the decade which gave us so much, musically – and we warmly invite you to join us, and dress for the period!

That’s the era when Motown was born, when the Merseybeat burst forth and when the British Invasion of American pop culture took place with groups like the The Beatles, the Rolling Stones, The Animals, Manfred Mann, together with solo artists like Petula Clark and Dusty Springfield, leading the way.

They were the years when popular music really went pop, when the likes of Dylan and Simon and Garfunkel and the Beach Boys all became musical legends; the decade which, in its later years gave birth to prog rock (and even acid rock, as the Grateful Dead had their beginning then, as The Warlocks!) – and which of course gave us Woodstock and flower power!

So why not delve into your wardrobe and find your most suitably 60s outfit – with or without flowers in your hair – and hop along to join us at Caitinara Bar from 16:00 through 18:00 SLT to celebrate the music of this most iconic decade of the 1960s? We look forward to seeing you there!

There was no deployment to the Main (SLS) channel on Tuesday, July 12th.

Wednesday July 13th saw a new server maintenance package deployed to all three RC channels comprising “minor internal changes”. One of these sees worn scripts capped at a count of 2500. Attempts to add attachments which take an avatar over this limit should result in the attachments failing to wear.

The Maintenance RC viewer updated to version 4.0.7.317394 on Friday July 8th, following a merge with the current release viewer code.

The Oculus Rift project viewer was withdrawn on July 6th, and development work with the headset has been suspended for Second Life – see my update from last week for more.

This leaves the rest of the current official viewer as follows: