– Play The Game Tonight by Kansas

Hi there, This is R. Crap Mariner, your Dance Correspondent.

I’ve been photographing dance shows for over a year, but one thing I promised myself was that I’d stick to shooting dance. I wouldn’t get all involved in the whole scene, I wouldn’t blog any of it, and God forbid I ever think of taking the stage myself, let alone choreograph my own routines. “No, no, no, no, no, no.” I said when people taunted and tempted me. I was not going to give in.

Point. Shoot. Leave. That’s the plan. Stick to it.

Well, I kinda screwed that all up. Because I début at Guerilla Burlesque’s pitshow on April 13th.

You see, in order to better understand dance performance, I figured I had to perform at some point. Especially if I were to get away with some of the jokes with my Don’t Make Me Call The Dance Police column. It’s a case of “put up or shut up.”

But it wouldn’t just do to ride someone else’s mover and be their puppet. Not that there’s anything wrong with that, and the times I’ve done that have been fun… 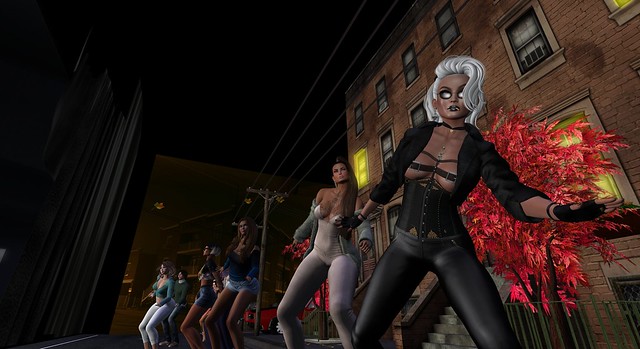 (Had to fight Terri to get that last Club Image mover, but she got even with me by shivving me in the lunch line.)

But I felt that I had to try to make my own. Kind of like how Hunter Thompson immersed himself into a story with Gonzo and George Plympton would put on a helmet or strap on some cleats in his participatory style. Or Gonzo the great would… erm… okay, he was a Muppet. Never mind.

Building my own act would give me a better appreciation of what it takes for a choreographer to put together a routine and also to learn the different styles that each director and choreographer brings to the table. Finally, everybody’s got their short cuts, tricks, and signature elements in an act, so building something to work with allows them to say, “Hey, there’s an easier way to do this…” or “I know of a better version of this object…”

Looking back over the process and the plan, I’m going to share my journey with you. It’s the order in which I did things, and not necessarily the right order to follow. Also, it’s not a cookbook with individually numbered steps to follow to build your own act. You’re going to need to fill in some of the gaps and details on your own or in your class or with your teacher.

Most importantly, maybe you’ll read my story and think “If that dingbat can do this, maybe I can, too?”

WARNING: This article is long. Really, really long. I’d break it up into multiple parts, but… nah. Anywhere you slice it, you’re cutting into my soul. Let’s just mark this edge here as the cliff from which you can dive into the madness. Wheeeeeeeee…

“You think that something’s happening…”

When I start anything, I watch Internet Genius, Motivator, and Commentator Ze Frank’s Invocation For Beginnings.

Yes, the man who challenged the world to dress up their vacuum cleaners and make an Earth Sandwich. That man. Internet God, he is.

This video gets me in the mindset to be patient, forgiving, persistent, and accepting. If you’ve got a ritual or routine or motivator, use it to get in the right frame of mind.

Plus, he’s got a lot of good quippy quotes over the years of using the Internet as a playpen, even if he isn’t a pretty princess.

“But it’s only what you’re hearing…”

The longest journey begins with a swift kick in the ass, so yeah, I started to watch performers and learned from what I saw, asking questions and opinions from others in private chats for what they thought worked well, what didn’t, my thoughts on the routines and what I took away from the experience.

This was both easy and hard. I mean, yeah, I enjoy going to performances and shooting photography, but I also needed to learn the language of dance and what made a good performance with dances, sets, costumes, etc. And also, learn what didn’t work, such as overwhelming particles, slow-rezzing sculpties, too many textures, dance moves that just didn’t fit the song, acts that were too small for the stage, costume changes that fail due to lag, etc.

Here’s the basic components of a dance act:

Put them all together, and… okay, you’re dancing to silence. Gotta hand a song track to the host/deejay/music director too.

We’ll cover all of these things, plus a few frustrations and surprises along the way.

END_OF_DOCUMENT_TOKEN_TO_BE_REPLACED

Cica Ghost is widely known for her 3D art installations – which I always find a joy to blog about. Within many of her installations visitors will often find little two-dimensional stick figures, often animated. While perhaps less well-known to many more recent appreciators  of art in Second Life, is that these two-dimensional pieces are very much a part of Cica’s Art, and have formed central parts of past exhibitions she has displayed in-world.

A reminder of this can currently be found at the Paris Metro Art Gallery, which is hosting a modest but charming exhibition of Cica’s work, 2D and 3D. On display are five of Cica’s 2D art elements, four of them her wonderful stick figure characters: three framed, and the fourth to be seen riding his bicycle along one wall, appearing and disappearing at either end of the barn-like setting for the exhibition.

Also on offer are several of the quirky (and fun) little vehicles Cica often provides within her 3D installations so that visitors can drive around in them.

The first of these – and one of my favourites – is the catomobile from 50 Cats (see here for more), just inside the gallery’s front entrance and sitting with the 2D art.beyond the dividing wall are six more of the vehicles, with the Catomobile, BirdCar and MouseCar offered as drivable models for pootling around the exhibition space. As well as these, the exhibition has elements visitors my recognised from installations such as the metals girders seen in the likes of Bird People (see here).