Now open at Dathúil Gallery, curated by Max Butoh and Lυcy (LucyDiam0nd), is a display of art by Mi (Kissmi), entitled Overviews. In some ways, it’s a curious exhibit, comprising 20 very large format pieces, together with an assortment of posters and 3D items. However, as one spends time within it, so the artist’s approach falls into place.

“To make and exhibition is much more than to show my images,” Mi says of the display. “It is also to have a project, to think about it, to build it, to share with others and it making sense.
Every look on our work is a particular look, and obviously interesting. I don’t pretend to be an artist, I am just a sensitive person who likes to create images. My exhibition at Dathúil is named Overviews because it is a panel of pictures showing abstracts and more realistic topics.”

The more abstract pieces Mi refers to can be seen on the mezzanine level of the gallery, where current installations by Livio Korobose (The joy Formidable) and Boefje (Bufje) (Ephemeral) are represented with six impressions by MI apiece. The bold colours used within these images offer a striking contrast to, and interpretation of, the two exhibits which inspired them – something I found to be particularly true with the images of Ephemeral, which is otherwise a predominantly white installation.

It is also with regards to these two installations Mi used as her inspiration, that some of the additional elements within the exhibition space align. The two large paper aeroplanes by Livio, for example, point our attention to Mi’s interpretations of his exhibit, in which paper aeroplanes also appear. Similarly, the ladders, which can again be found within The Joy Formidable, present visitors with perches from which they can further appreciate the art. Meanwhile, the small field of flowers and the figurine placed before the images of Ephemeral stand as a physical link to that installation.

However, I confess to finding these sets of images somewhat overpowering – possibly in part due to their enormous size – they are by far the largest I’ve seen displayed at Dathúil, the layout of which perhaps isn’t the best for gaining a broader perspective of such enormous pieces. Instead, I found myself drawn more to the five images displayed on the ground floor of the gallery.

Equally large format, these benefit from being presented in a more enclosed space, thanks to the mezzanine area above. This gives them a more intimate presentation, which is ideally suited to their subject matter. All five, together with an additional pair of images on the mezzanine over the gallery’s entrance, offer scenes of a personal nature; moments of contemplation, reflection, and more, caught in a flick of frozen time, each as evocative as the name it has been given.

This is another exhibition where more than a casual glance is required; the images offered, upper and lower levels offer such diverse approaches in style and content, that Overviews could be taken to be two exhibitions in one, each offering a glimpse into Mi’s approach as a photographer and – despite her claim otherwise – an artist.

Overviews will remain open through until the end of November 2016.

We’re all familiar with the Moon, Earth’s cosmic companion. So familiar with it in fact, that we probably all think we know the theory behind how it got to be where it is – the result of a “giant impact” far back in Earth’s early history. However, a new study, published on October 31st in Nature, suggests what actually led to the creation of the Moon was possibly a lot  more elegant than previously realised.

The Moon is actually quite unique among the solar system’s satellites. It’s relatively large when compared to its parent planet, and it is a made of pretty much the same stuff, minus some more volatile compounds that evaporated long ago. Other moons tend to be a lot more chemically diverse when compared to one another and their parent worlds.

The accepted theory of lunar formation has it that not long after primordial Earth formed, a Mars-sized object grazed it, throwing off a mass of material from which the Moon subsequently condensed. This impact set the angular momentum for the Earth-moon system, and gave the early Earth a five-hour day. Then, over the aeons, the Moon slowly receded from the Earth (as it continues to do so to this day), and Earth’s rotation has slowed to our current 24-hour day.

It’s a theory all worked out be a combination on mathematics based on the moon’s current orbit, the angular momentum of the Earth-Moon system, the influence of various tidal forces, a little bit of guesswork, etc.  However, it does have a couple of holes in it.

The first is that if the Moon was formed as a result of material set free during a slight collision between Earth and another body, then that material should have been a mix of debris from both Earth and the other body, giving rise to a lunar composition that should be at least somewhat different to that of Earth. The second is that if the Moon condensed from a disk of material rotating around Earth’s equator, it should be in orbit over the equator – but instead, its orbit is tilted 5 degrees off the equator.

Both of these issues have previously been explained in terms of “intervening steps” between what we see today and the original  “giant impact”. However, a team of scientists led by Sarah Stewart, professor of earth and planetary sciences at the University of California, have posited an alternative explanation, which requires no “intervening steps”, but always natural mechanics to explain everything.

In their model, the “giant impact” still occurs –  but it completely destroys the nascent Earth and whatever hit it, leaving a mass of vaporised and molten material  orbiting the Sun, which eventually condenses to form a “new” Earth and the Moon – thus giving them similar chemical compositions. Initially, the Earth would have likely been tipped so its axis was pointing towards the Sun while spinning in a two-hour day.

Then, as angular momentum was dissipated through tidal forces, the Moon started receding from Earth, eventually reaching a point called the “LaPlace plane transition”. At this point the forces from the Earth on the Moon became less important than gravitational forces from the sun, resulting in some of the angular momentum of the Earth-Moon system transferring to the Earth-Sun system, causing the Earth to tip “upright”, while leaving the Moon in a very highly inclined orbit relative to Earth’s equator. However, as the Moon continued to slowly and naturally recede from the Earth, it eventually reached the Cassini transition, gradually reducing the Moon’s angle of inclination relative to the Earth’s equator, bringing it to the five-degree offset we see today.

Thus, with this model, no exotic intermediary steps are required to account for the Moon’s composition or why it is where it is today; everything can be explained through the application of mathematics and planetary mechanics, offering a compelling alternative to the accepted theory of lunar evolution.

With a 25 tonne low Earth orbit payload capacity, the Long March 5 stands on a par with the current crop of heavy lift launch vehicles in operation around the world. The product of two decades of research and development, it is destined to become a centrepiece of China’s growing space ambitions.

Among its may missions, the Long March 5 will play a leading role in the construction of China’s upcoming space station, starting with the launch of the core Tianhe (“Harmony of the Heavens”) module in 2018. When completed in 2022, the 60-tonne station will comprise the core module supported by the Wentian (“Quest for the Heavens”) and Mengtian (“Dreaming of the Heavens”) pressurised experiments modules, all of which will be linked by a multi-port adaptor / EVA airlock.

END_OF_DOCUMENT_TOKEN_TO_BE_REPLACED 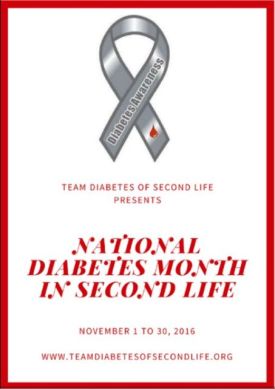 November is National Diabetes Month in the United States, a time when the American Diabetes Association (ADA) draws attention to diabetes awareness, prevention, treatment and support mechanisms available to  diabetes sufferers and their families.

In support of this, Team Diabetes of Second Life are and will hold a number of in-world events throughout November to help raise awareness of the disease and funds for the American Diabetes Association.

The Red Hunt: running throughout November 2016 (1st through 30th), this is an open hunt, meaning you do not have to start in any order. All items are 10 lindens, with 100% proceeds going to Team Diabetes of Second Life!

Live Healthy Tips: running from November 4th to the 30th

The Red Ball: November 27th, 2016 13:00-14:00 SLT: sponsored by Ghee and featuring the music of Mimi Carpenter. Check the Team Diabetes of Second Life website for more information nearer the date.

In addition, November 14th in National Diabetes Day in the USA, and throughout the month, Team Diabetes of SL are giving away a free National Diabetes information pack through their in-world office at Nonprofit Commons. The pack includes information on diabetes awareness, prevention and treatment from the American Diabetes Association, and goodies for Second Life avatars!

About the American Diabetes Association

Established in 1940, the American Diabetes Association is working to both prevent and cure diabetes in all it forms, and to help improve the lives of all those affected by diabetes. It does this by providing objective and credible information and resources about diabetes to communities, and funding research into ways and means of both managing and curing the illness. In addition, the Association gives voice to those denied their rights as a consequence of being affected by diabetes.

About Team Diabetes of Second life

Team Diabetes of Second Life is an official and authorised fund-raiser for the American Diabetes Association in Second Life. Established with the aim of raising funds in support of diabetes treatment and to raise awareness of the disease in SL, Team Diabetes of Second Life was founded by Jessi2009 Warrhol and John Brianna (Johannes1977 Resident), and is served by an advisory board comprising Eleseren Brianna, Veruca Tammas, Sandie Loxingly, Rob Fenwitch, Earth Nirvana and Dawnbeam Dreamscape, with Saiyge Lotus serving as a special advisor.