The Curiosity rover team have released a further study showing that ancient Mars was capable of storing water in lakes over an extended period of time, and that this water was a principal component in the creation of “Mount Sharp”, the mound at the centre of Gale Crater, currently being investigated by the NASA rover.

This forms the latest in a series of reports on the subject of water on Mars and in Gale Crater to be published by the Curiosity science team, and comes almost a year after I wrote about studies released by the team which detailed how “Mount Sharp” – more formally known as Aeolis Mons – was most likely formed by sediments laid down  by successive wet period in Mars’ ancient past.

“Observations from the rover suggest that a series of long-lived streams and lakes existed at some point between about 3.8 to 3.3 billion years ago, delivering sediment that slowly built up the lower layers of Mount Sharp,” said Ashwin Vasavada, Mars Science Laboratory project scientist, discussing the new report.

However, until Curiosity actually started studying “Mount Sharp” in detail,  the accuracy of the earlier studies couldn’t be completely verified. The latest results from the rover indicate that these wetter scenarios were correct for the lower portions of Mount Sharp, and that the filling of at least the bottom layers of the mountain occurred over a period of less than 500 million years, mostly as a result of material deposited by ancient rivers and lakes.

The new report also comes on top of confirmation that the recurring slope lineae (RSL) features seen on Mars from orbit are most likely the result of outflows of water which are occurring today. together they are reshaping some of the thinking around water on Mars – and what might have happened to it.

“What we thought we knew about water on Mars is constantly being put to the test,” said Michael Meyer, lead scientist for NASA’s Mars Exploration Programme. “It’s clear that the Mars of billions of years ago more closely resembled Earth than it does today. Our challenge is to figure out how this more clement Mars was even possible, and what happened to that wetter Mars.”

Currently, images of the flanks of the mound returned by the rover and from orbit suggest water-transported sedimentary deposition may have extended at least 150 to 200 metres (500 to 650 feet) above the crater floor, and possibly as high as 800 metres (approx 1/2 a mile). This both indicates that there was at least one standing body of water in the crater and further confirms that “Mount Sharp” was a direct result of sediments deposited by this water. Or at least, the lower slopes were; there is currently little evidence for the sedimentary strata extending about the 800 metre mark, however. This has led to speculation that wind-blown deposits are responsible for the upper reaches of the mound.

Taken together, the recent findings concerning Mars and its water suggest that the planet’s history is far more complex than had been thought. “We have tended to think of Mars as being simple,” John Grotzinger, the former project scientist for the Curiosity mission said of the latest findings.

“We once thought of the Earth as being simple too,” he continued. “But the more you look into it, questions come up because you’re beginning to fathom the real complexity of what we see on Mars. This is a good time to go back to re-evaluate all our assumptions. Something is missing somewhere.”

The latest images and data to be received on Earth from NASA’s New Horizons space vehicle reveal Pluto’s atmosphere to be a rich blue in colour, and confirm that water ice exists on theplanet.

“Who would have expected a blue sky in the Kuiper Belt? It’s gorgeous,” said Alan Stern, New Horizons principal investigator as the striking image shown above was released as part of the latest batch of pictures and data to be received from the space craft and undergo processing and initial analysis.

The blue colour indicates that the haze within Pluto’s atmosphere is made up of a lot very fine of particulate matter, which scatters blue light from the Sun more easily than other colours, due to blue having a shorter wavelength (which is also the reason the sky we see here on Earth also appears blue, because that wavelength is easily scattered by the tiny particles making up our atmosphere).

In Pluto’s case, it’s thought that the particles in the atmosphere are largely tholins, created by ultraviolet radiation from the Sun breaking down the methane and nitrogen in Pluto’s upper atmosphere, allowing their molecules to gradually recombine into the more complex tholins, which draft down through the atmosphere, undergoing further changes, before eventually reaching the surface of the planet, giving it a distinctive reddish colour.

The discovery of water ice on Pluto has taken scientists by surprise. Not so much because it is there, but because it appears to be somehow related to areas of heavy tholin deposits. Confirmation of the presence of water ice came from data returned by the Ralph instrument suite aboard New Horizons, but just how widespread it might be isn’t clear, as it seems that it might be masked elsewhere by other surface material. 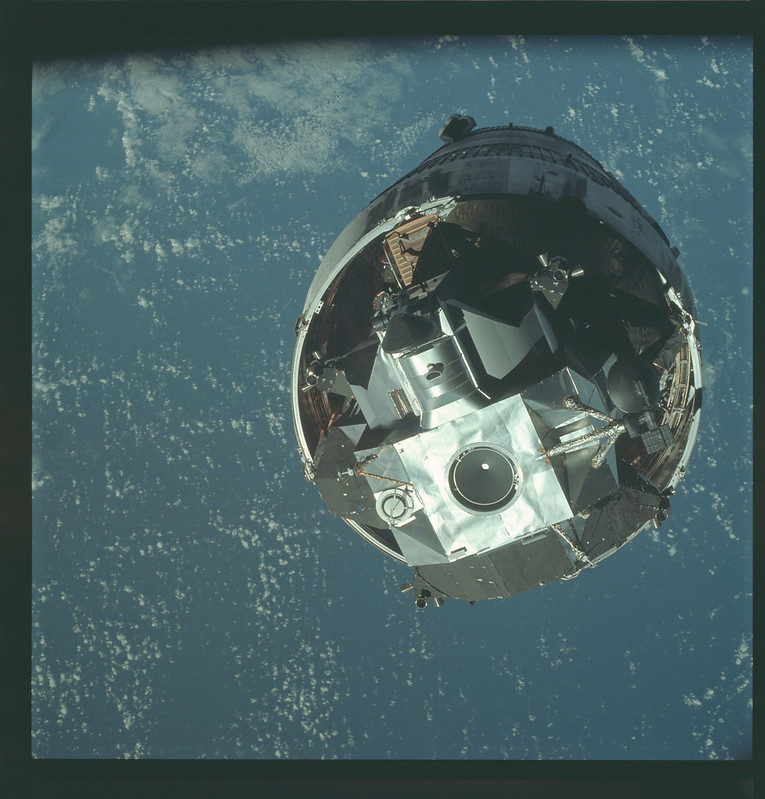 Apollo 9, March 1969, the first flight of the Apollo Lunar Excursion Module (LEM), which has been photographed from the Apollo Command and Service Module (CSM) as it sits in its housing within the upper stage of the Saturn V launch vehicle, prior to the CSM docking with it and removing it from the Saturn  – one of the 13K+ images on the Project Apollo Archive

Headlines were made in early October with the launch of a new Flickr archive – the Project Apollo Archive. It comprises over 13,000 scans of the original, unprocessed 70mm Hasselblad film magazines as received from NASA’s Johnson Space Centre in Houston, and has been put together by space enthusiast Kipp Teague.

The Archive has grown out of a project Mr. Teague has been undertaking for the last 16 years to archive NASA space flight images, as he explains in the introduction to the Flickr Archive:

The Project Apollo Archive was created in 1999 as a companion to my personal “Contact Light” website … a personal retrospective of the era of the space race. A subsequent collaboration between the Archive and Eric Jones’ Apollo Lunar Surface Journal led to [the] acquisition over the years of countless historic Apollo and other space images provided by NASA and others for processing and hosting on the NASA-hosted Journal as well as on my site. 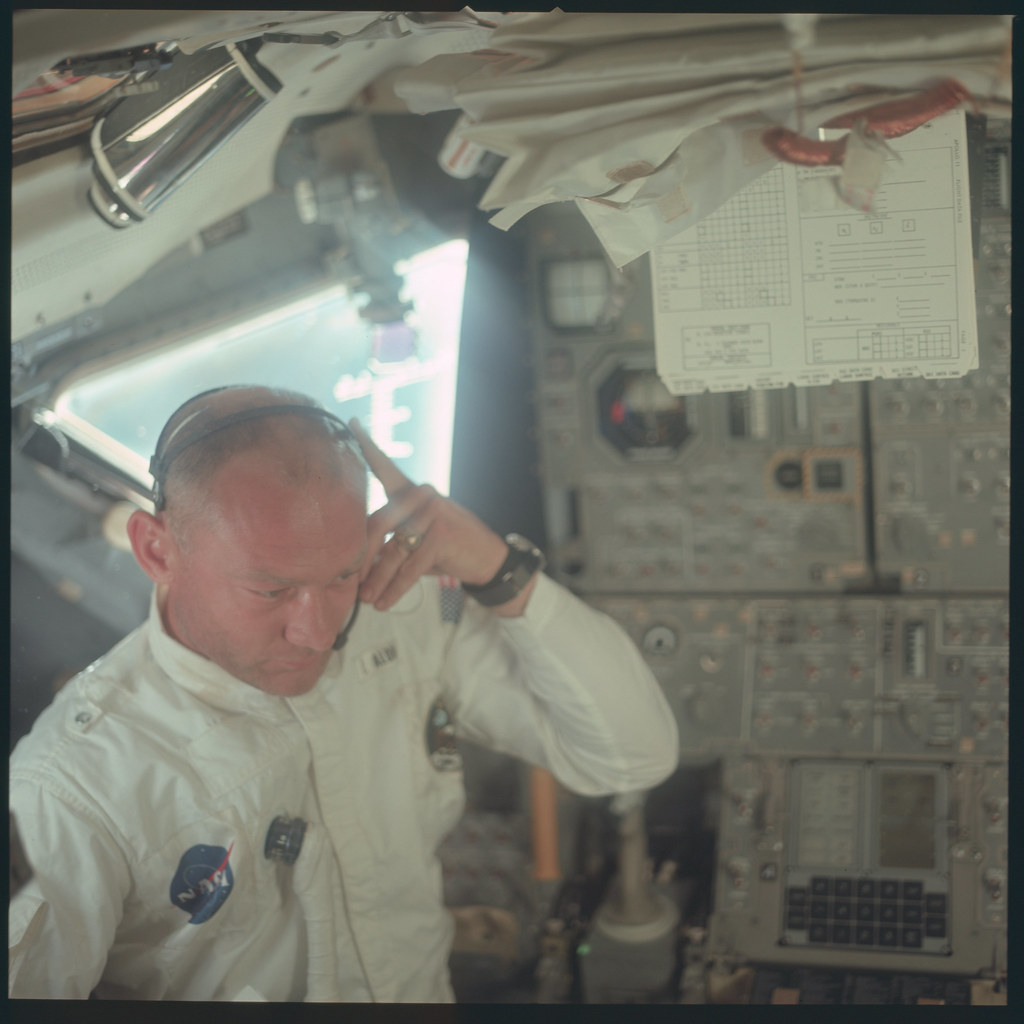 Now the images are available through browsing-friendly Flickr, and Teague has arranged them into albums covering every Apollo mission from Apollo 7 (first crewed orbital flight of the Apollo Command and Service Module) through to Apollo 17 (the last Apollo mission to land on the Moon).  As such, the archive represents a hugely historic collection, and Teague is to be congratulated on his work and in making the images so readily available.

It sounds like something out of the pages of a James Bond novel, however, it is anything but.

In September 2014, Russia launched a military satellite, referred to as either Luch or Olymp, into geosynchronous orbit about the Earth, 36,000 km (23,000 mi) over the equator. During the seven months that followed, the craft gradually manoeuvred itself until it was positioned between two private sector communications satellites, Intelsat 7 and Intelsat 901, which are located within half a degree of one another in the same geosynchronous orbit.

Once in position, the Russian vehicle commenced manoeuvres between the two Intelsat vehicles, sometimes coming within 10 km (6 miles) of either one of them, causing understandable concern within Intelsat.

As Intelsat are working with the US Air Force and the US Department of Defence on space communications, the company alerted the US Air force of the situation.

Currently, it is believed that the Luch / Olymp vehicle may have a role in signal intelligence or communications, and might have been trying to tap-in to communications being relayed by the Intelsat vehicles.

Nor is it just the Intelsat craft that have been targeted by the Russian vehicle. When the situation with the two Intelsat craft was recently confirmed by both the company and the US Air force, an Air Force spokesman also indicated that on three occasions, Luch had come within 5 km (3 mi) kilometres of another US satellite. However, he refused to reveal details of the satellite in question, fuelling speculation it may have been military vehicle. Both the US government and Intelsat apparently made attempts to contact the Russian government to seek clarification of their intent with  Luch, but did not receive any response.