On Thursday, October 1st the Notification viewer updated to RC status with the release of version 3.8.5.305555. This viewer provides a new Notifications floater, which separates incoming notifications into four categories:

Each notification in a list can be expanded or collapsed by clicking the arrow at the bottom right of the listing. The Collapse All button to collapse any expanded notifications. Notifications can be deleted individually using the X button, or collectively for a tab using the Delete All button.

You can find out more by reading my initial overview of the viewer, provided when the viewer was first released as a project viewer.

On Wednesday, September 30th, a new Maintenance viewer RC was released. Version 3.8.5.305531 brings with it 90+ fixes, updates and feature requests. Please refer to the release notes for further details.

The recently promoted mesh uploader viewer (version 3.8.4.305119, appears to bring with it one or two problems when using materials in uploaded mesh models. See the notes and links on Nalates Urriah’s blog for details.

The new HTTP viewer, version 3.8.4.304871, released on September 8th, and known by the code name of Azumarill, has been causing some light-hearted disappointment in some quarters. It seems the viewer works so well, that for some, it spoils the game of “guess which texture will render next”, because textures can render very quickly on it!

However, these is a more irritating issue which can be encountered when using this viewer. The issue itself, which has been an intermittent problem on some viewer versions appears as an object permissions error which some people are reporting as encountering on every single log-in (see the forum thread above, and BUG-9066).

Not actually a Lab-drive SL update, but the UKanDo v3-style TPV updated to version 3.8.4.28149 on Wednesday, October 30th. The update sees the viewer gain parity with the LL 3.8.4 code-base (mesh uploader), and also RLV through to release 2.9.4. The the viewer’s release notes for details.

From September 12th through September 27th 2015, live performers, DJs, entertainers and venues from across Second Life came together for two weeks of music and entertainment to raise money for Stand Up 2 Cancer’s world-wide activities in funding practical cancer research and treatment.

Organised by the incredible Still Braveheart, Stand Up 2 Cancer in Second Life 2015 brought together over 150 entertainers across more than forty venues during the two weeks of the event, and the total amount raised in-world has now been tabulated – and it is impressive:

That’s around US $11,784.47. As per SU2C in Second Life’s stated aim, the money raised will be divided equally between SU2C’s work in Canada, the United Kingdom and the United States.

“I watched so many of you put aside everything to come together and make this so successful,” Still states in her blog.

“We did something this year that no one else has done before (at least to my knowledge)….we said global and we did global As Stand Up To Cancer grows so will we.  Many that have refused to do other things came out and worked with us on this. Commenting on the two weeks to me, she added, “thank you to each and everyone that came out to an event, for together we truly made a difference.” 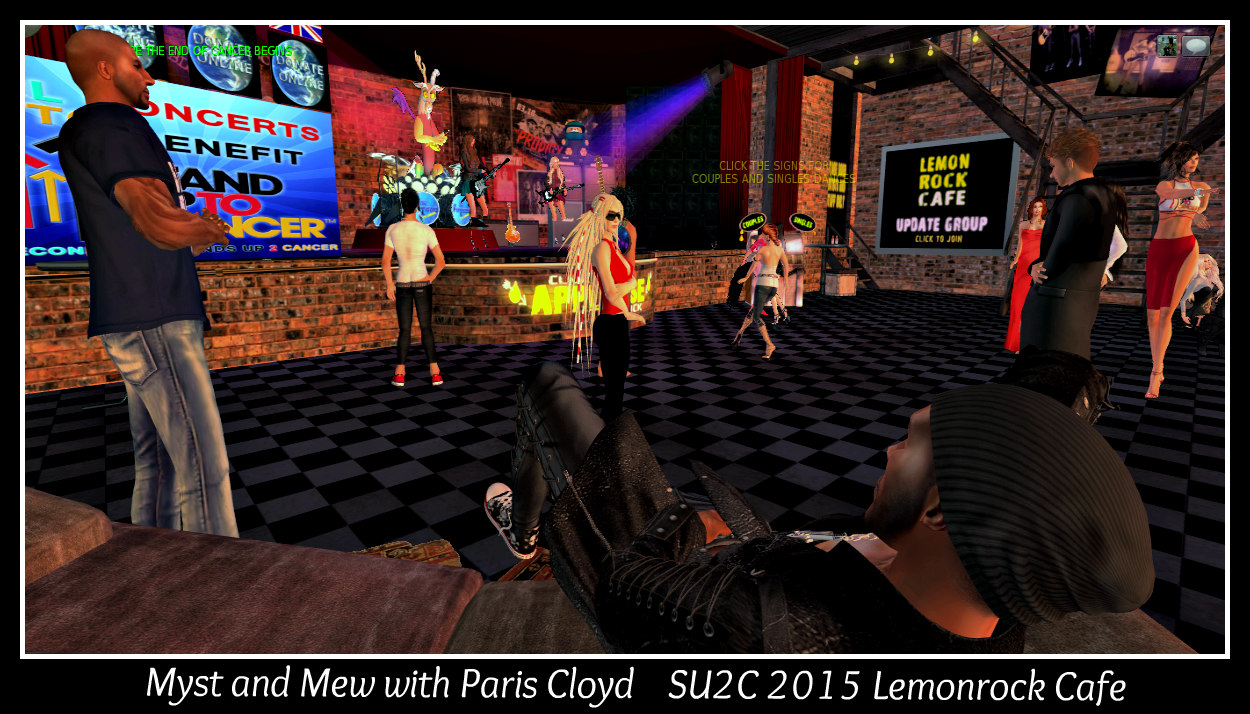 In addition to being able to make donations in-world, those in the USA and UK also had the option to donate directly to SU2C’s work in those countries to the SU2C in SL Team Pages – and these amounts have yet to be included in the above total. Doubtless, Still will announce those figures as soon as they are available.

In the meantime, the full transaction report for in-world receipts of donations received through the kiosks and boards placed at the participating venues is available,  although as Still notes, it may be liable to additional revision and tidying-up.

Congratulations to Still and all who were involved in SU2C 2015, whether assisting in the organisation, or as venue owners, performers or supporters. And here’s to 2016!

Stand Up 2 Cancer provides an innovative  approach to ending cancer, which puts funds directly where they are needed: into leading-edge cancer research and treatment, and undertaking aggressive research programmes through what is called Translational Research. 100% of all donations made through SU2C goes directly into funding this work, none is lost to “administrative costs” or put aside for CEO or executive salaries, etc.

Such is the success of this approach that as of 2014, and in the USA alone, SU2C has raised over $261 million in seven years. This money has all be used in directly supporting 141 clinical trials of possible cancer treatments, involving 750 scientists and 5,000 cancer patients, and which have spanned 112 US institutions.