Curiosity officially reached its next planned waypoint – dubbed “the Kimberley” on Wednesday April 2nd, 2014, with a final drive of some 30 metres (98 feet), after detouring from its planned drive route to reduce the amount of wear and tear being suffered by the rover’s aluminium wheels, the result of traversing some particularly rough terrain for several months.

“The Kimberley” was identified from orbit in 2013 as a possible location of interest during the rover’s drive down towards the point at which it will start its explorations of the lower slopes of “Mount Sharp”. It is an area of four distinguishable rock types exposed close together in a decipherable geological relationship to each other.  As such, they should provide further clues about ancient environments that may have been favourable for life.

As a major waypoint, “the Kimberley” will form an extended stopover for Curiosity which, while unlikely to be as long as the 6 months the rover spent exploring and examining “Glenelg” and “Yellowknife Bay”, will still be in the order of several weeks. The first part of this work is study the area in more detail, and the location occupied by the rover and the end of its April 2nd drive  – Sol 589 for the mission – is ideal for this. A slight rise compared to the surrounding terrain, it provides an excellent vantage point from which the rover can survey its surroundings, allowing mission scientists to comprehensively review the area and plan the coming science programme in finer detail than can be achieved when using orbital images alone. The science work is expected to involve observation of the surrounding region, sample-gathering from the rock formations, and onboard analysis of the samples gathered.

As I’ve previously reported, a cause of concern for mission personnel of late has been the amount of wear and tear the rover’s six aluminium wheels have suffered during the drive south from “Yellowknife Bay”. While the matter is far from serious in terms of impeding the rover’s manoeuvring or driving capabilities, with Curiosity’s nuclear battery offering the chance for a mission as much as 20 years in duration barring unforeseen circumstances, and what might provide to be a punishing climb up into the slopes of “Mount Sharp” still to come, the rover was directed onto less harsh terrain – comparatively speaking – in February 2014. Since then the mission team have been periodically checking on the wheels for further signs of damage and, as I noted last time around, the wear on the wheels is now around a tenth of that which had been experienced prior to the diversion. Nevertheless checks are still being carried out – including during the period in which this report was being written, as demonstrated by the raw image below, taken directly from the NASA image archive for Curiosity.

END_OF_DOCUMENT_TOKEN_TO_BE_REPLACED 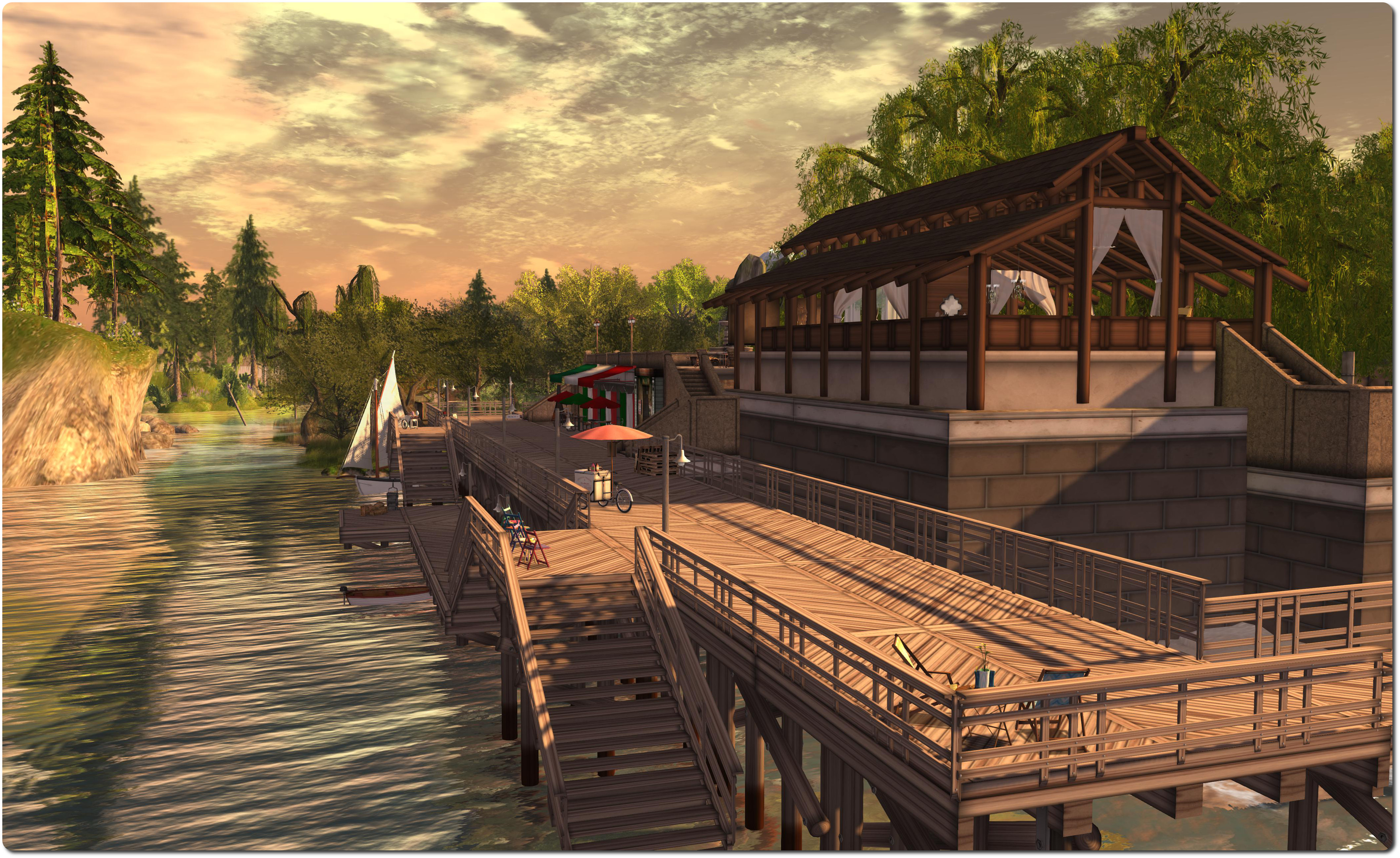 Since I happened across Asa Vordun’s Caprice Village and Easy A last year, I’ve been keeping an eye out to see if things change there. Truth be told, I loved the whimsical feel to the former and the winter landscape of the latter during my last visit in November 2013. so when I heard through the grapevine that Asa had completely reworked her land, I just had to hop over and take a look. 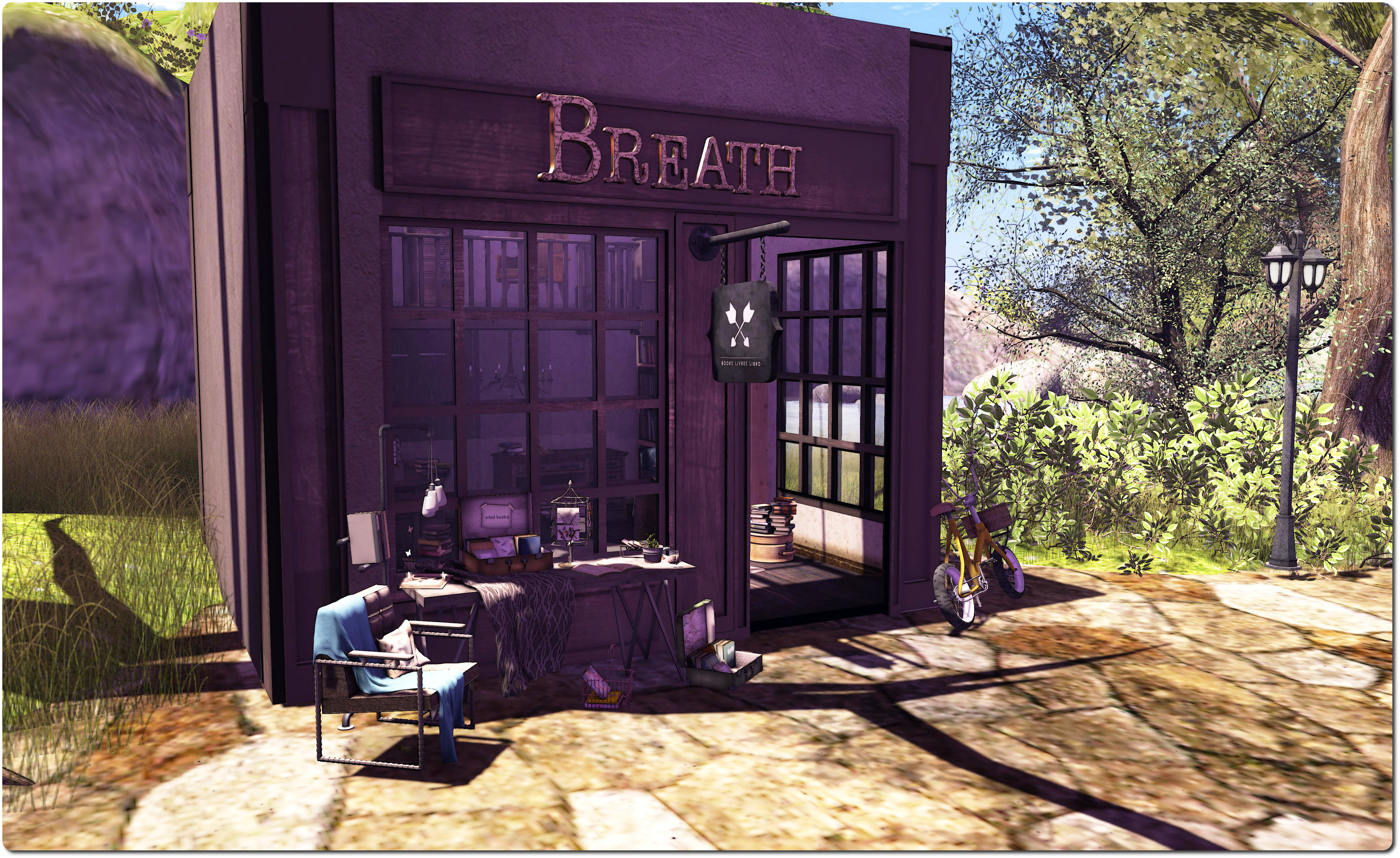 And what a change! The make-over is both extensive and stunning, making the Caprice Village parcel a must-see destination for SL photographers.

Such is the design of the new build that it is hard to decide where to begin in describing it. One part of the build resembles what might be the very edge of a rural district. In the middle of it sits a house bordered on one side by a road and bus stop, and on the other by a large paved terrace and what might be a car parking area. 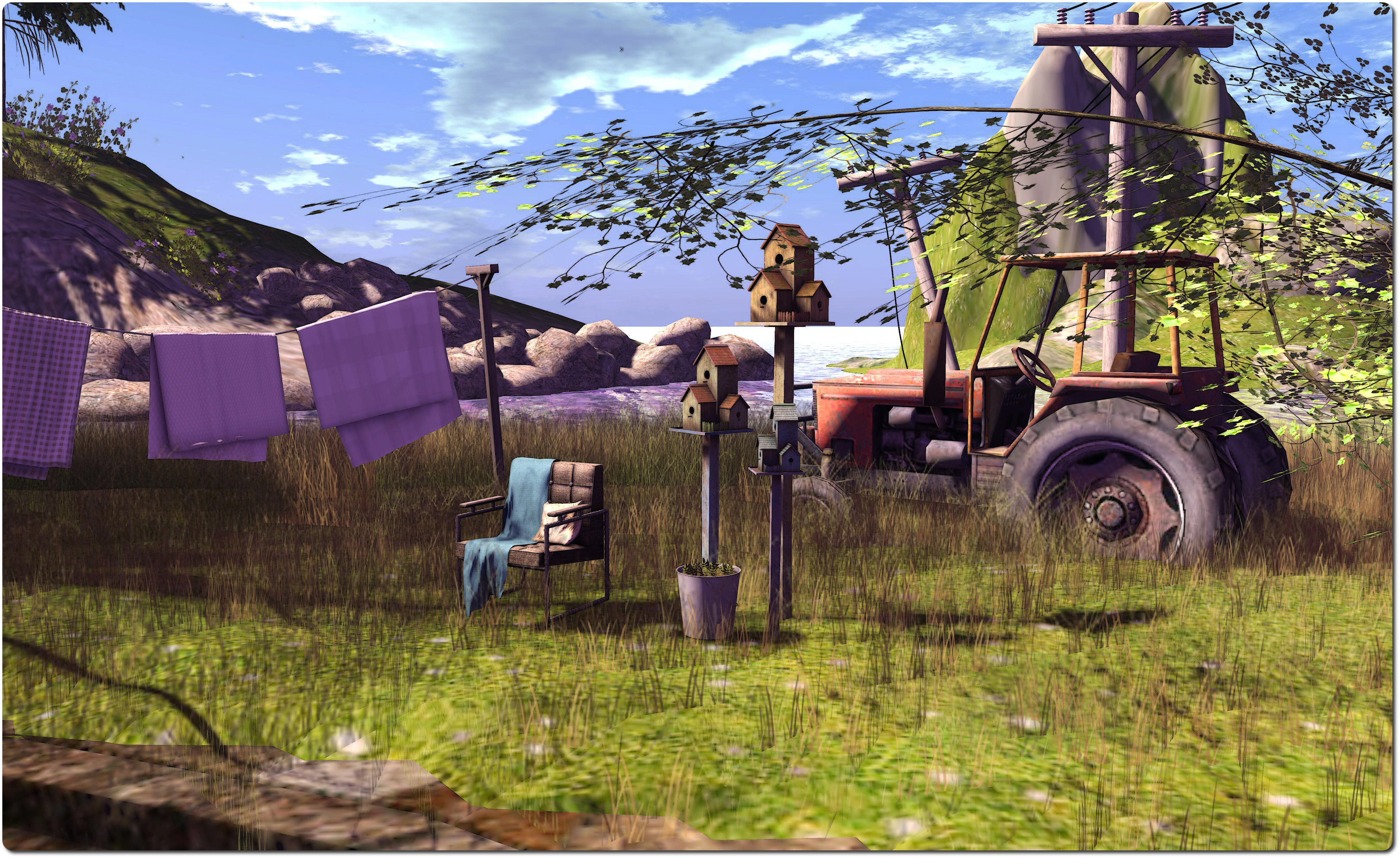 The land around the house is a little overgrown, and across the road sits an old tractor and a rather quaint well. Blankets hang on a washing line in the sun, while beyond them, the sea rounds a tall island and flows gently along a narrow channel, partially spanned by an old set of telegraph poles.

The paved terrace is home to a small bookshop, with wooden dock and rowing boat alongside it. A stone fountain splashes water nearby, and a small cafe area, apparently also served from the house, offers brightly painted wrought iron chairs and tables at which visitors can sit, the leafy spread of the trees by the house offering some shade during parts of the day. 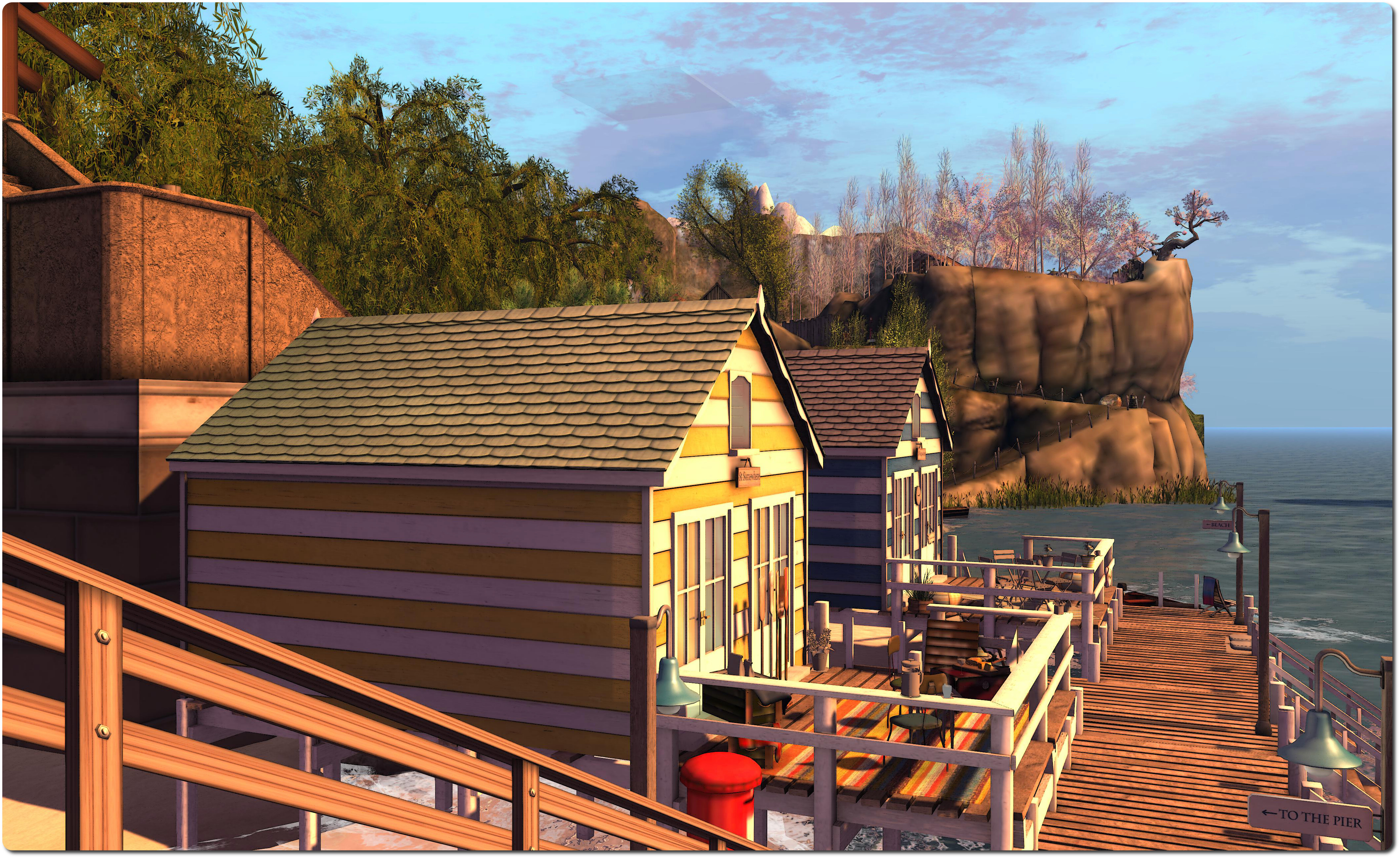 Follow the footpath to one side of the bookshop and you’ll come to a set of wooden steps leading up to a magnificent wood and stone pier, bordered on one side by a secluded beach area complete with a wooden broad walk crossing the water to a small islet where sits a little hideaway.

The pier has two large terraces, one complete with a lido, the other offering a place to sit and relax, another fountain playing on one side, and a water feature sitting just outside what is a beautiful dining area. I admit to falling in love with the latter on sitting it, especially with a suitable sunset windlight. Having spent a good deal of time in Sri Lanka, it reminded me of some of the fine dining experiences I’ve had out there, under wooden beams, the warm evening air unfettered by windows or wall, chatting with friends and fellow diners after a long day’s exploration. 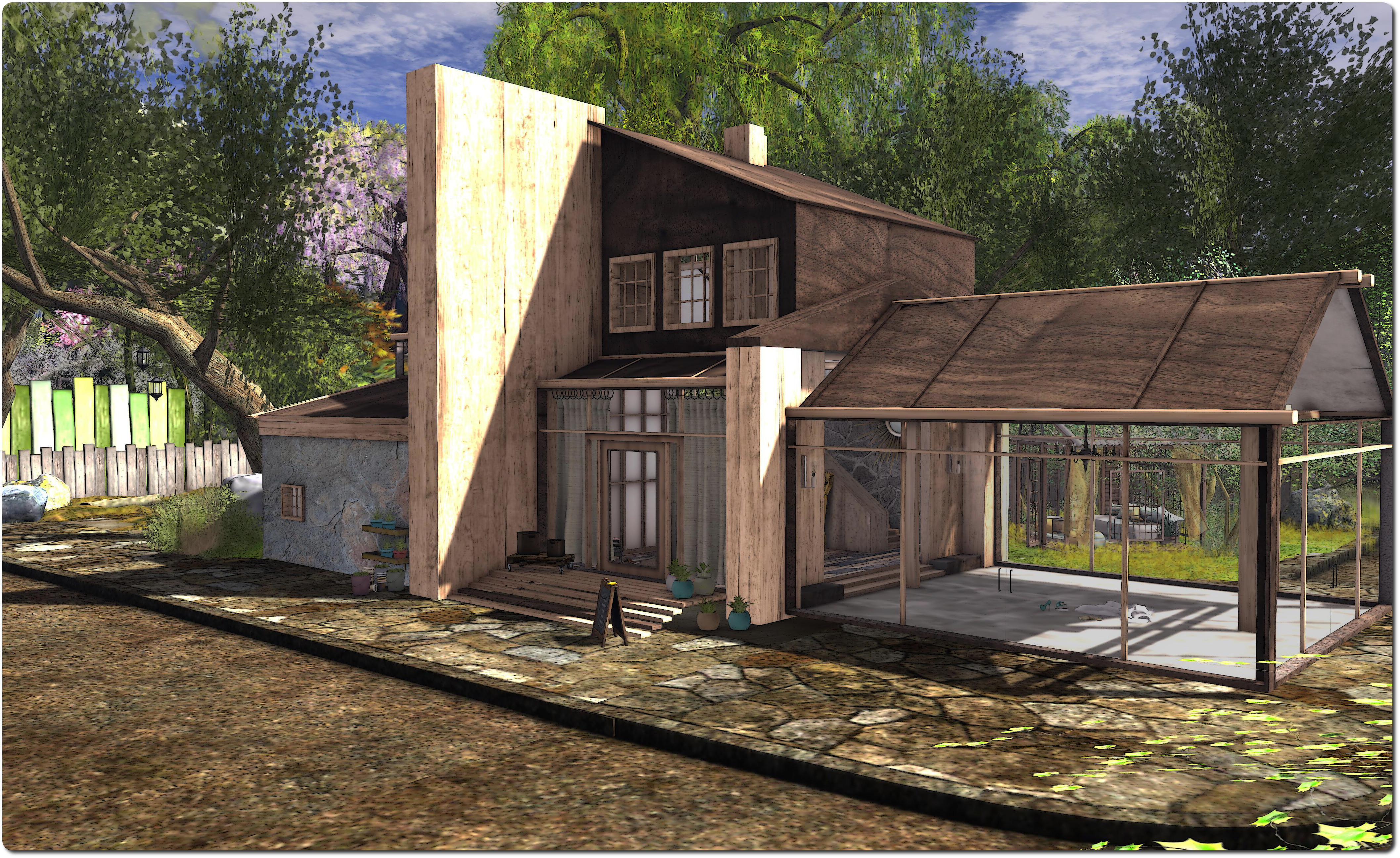 Those wishing to partake of the sea can do so just down from the pier, where a couple of beach houses sit, complete with steps down into the sea from a smaller pier, with steps also providing access to the beach. When exploring the latter and the little islet with its viewing platform, please do be aware that the housing sitting on wooden piles a little more inland appears to be that of another property rather than being part of Asa’s land.

As I said towards the top of this piece, words really don’t do Asa’s work justice. This is a wonderful, breath-taking build well worth taking the time to visit and explore. Should you do so, don’t forget to sign the guest book and, if your inclined, show your appreciation by way of the donations points.

Addendum: Asa dropped me a line to say the 5 parcels next to Caprice village and Haven are open to the public as well – I may well have to go back and snap some more! 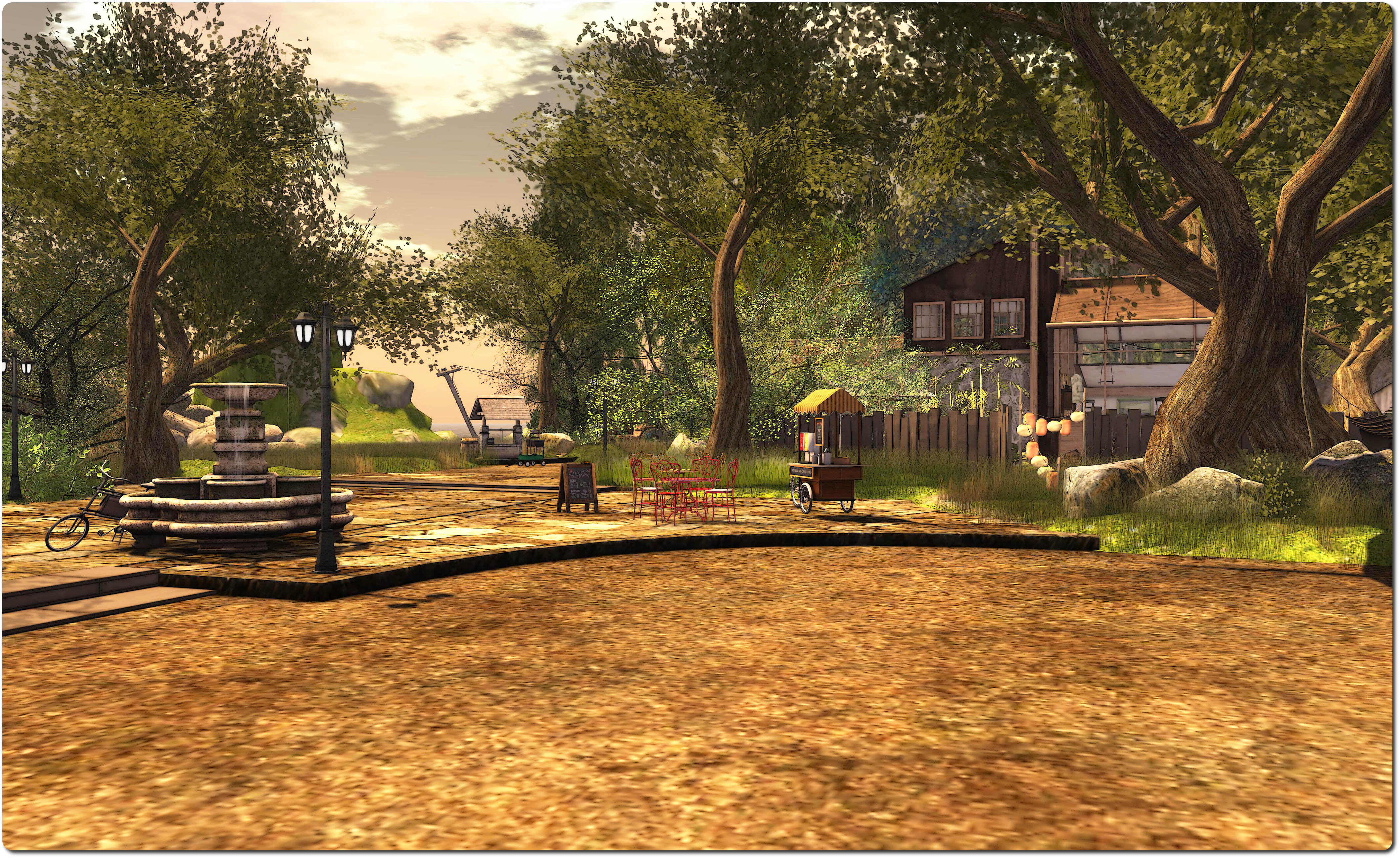 It’s pretty simple again this week: there are no server deployments scheduled for either the Main (SLS) channel (which remains on maintenance project 14.03.12.288004) or the RCs (which collectively remain on 14.03.28.288552). As always, please refer to the server deployment thread in the forums for the latest news and updates / issues.

As a result of this promotion, the StatTest viewer (formerly version 3.7.5.288371), which was never intended for promotion as a release viewer but issued as a means of assisting with bug-fixing the Google Breakpad code, has been removed from the viewer release channel.

“I’ll be working with Maestro this week to try to get the group ban services and back-end stuff grid-wide on Aditi,” Baker Linden informed the Simulator User Group meeting on Tuesday April 8th. He went on: “I have a handful of smallish bugs to finish up, and then I’ll look at my options for development viewers and such, so group ban will be grid-wise soon [on Aditi] (I hope, depending on the amount of releases in the pipe). And then after we see there’s no big issues, we’ll get that pushed out to Agni.”

As reported in part 2 of the my week 14 updates, there has been an issue in getting passwords and inventory to correctly sync on the Aditi beta grid following a password change. Normally, a script is run on  daily basis during periods of relatively low SL use (around midnight-02:00 SLT) which should synchronise a user’s password and inventory between Agni and Aditi. However, several people had noted that their Aditi passwords  / inventories were not updating despite several days passing after making  password change (see BUG-5563).

It had been thought this issue had been dealt with in week 14; however, a forum thread notes it is still causing problems for some people.

There was a brief issue with Transaction History pages on Tuesday April 8th which caused some consternation when it happened, although it was quickly rectified.

The problem first came to light when merchants noticed that their Transaction History page was no longer showing totals or options to download the history in anything other than .CSV format (the previous options had been .XML or .XLS). Further issues were noticed as time went on, as noted in a Commerce forum thread and also in a JIRA (BUG-5664).

The root cause of the problem appears to have been the URL for the familiar Transaction History page being swapped for a new page. The concerns this raised were sufficient for the URL to be reverted back to the original a little over an hour after the problem was first noticed, allowing people to once more access the familiar Transaction history page. Whether the change of URL is indicative of an upcoming change that is in preparation, or simply a mistake on the part of someone at the Lab, is unclear.