The new options have their own dedicated toolbar buttons (Flickr and Twitter) and can also be accessed through the Communicate menu.

The two floaters are similar, in that they include a tab for connecting to your Flickr or Twitter accounts, and a tab for uploading messages / snapshots.

The account connection options will open floaters allowing you to log-in to Flickr or Twitter and authorise the linking of your SL account to them. Once linked, the Twitter floater allows you to send Tweets either with or without snapshots attached. Both of the floaters allow you to include your current in-world location as a part of a Tweet / with a snapshot.

Insofar as snapshots are concerned, both capabilities provide the following options:

Additionally, the Flickr floater includes the ability to provide snaps with a title, description, and Flickr tags.

At the time of writing, it is unclear whether or not the Facebook photo upload block has been lifted by Facebook or not. As I reported in my week 13 SL projects updates, LL believe they have updated both the viewer and the back-end intermediate process linking to Facebook in order to comply with Facebook’s requirements. However, any official lifting of the block by Facebook as yet to be confirmed by the Lab.

In the meantime, details on the new project viewer can be obtained from the release notes page, which includes download links to the Windows, Mac and Linux versions (as does the viewer’s entry in the Alternate Viewers wiki page).

So… can’t wait for Oculus Rift? Fed-up with no 3D capability on the Linden Viewer with nVidia 3D glasses?

Well, fear not! On April 1st, the Lab announced FULL SUPPORT for anaglyph glasses! This great news was announced in a blog post which reads in part:

We think this will appeal to literally dozens of Second Life users nostalgic for the kind of 3D experiences provided by comic books, cereal boxes, and B-movies.

A key immersion feature of the Oculus Rift is the ability to look around the world by moving your head. This works with the anaglyph 3D mode as well. Simply attach the monitor to your head and coordinate your camera controls with your head movements.

Those wishing to take advantage of this latest innovation from the Lab, a company which demonstrates it can look backwards as well as forwards, can grab the project viewer today – but be quick, this is a one-day opportunity only! 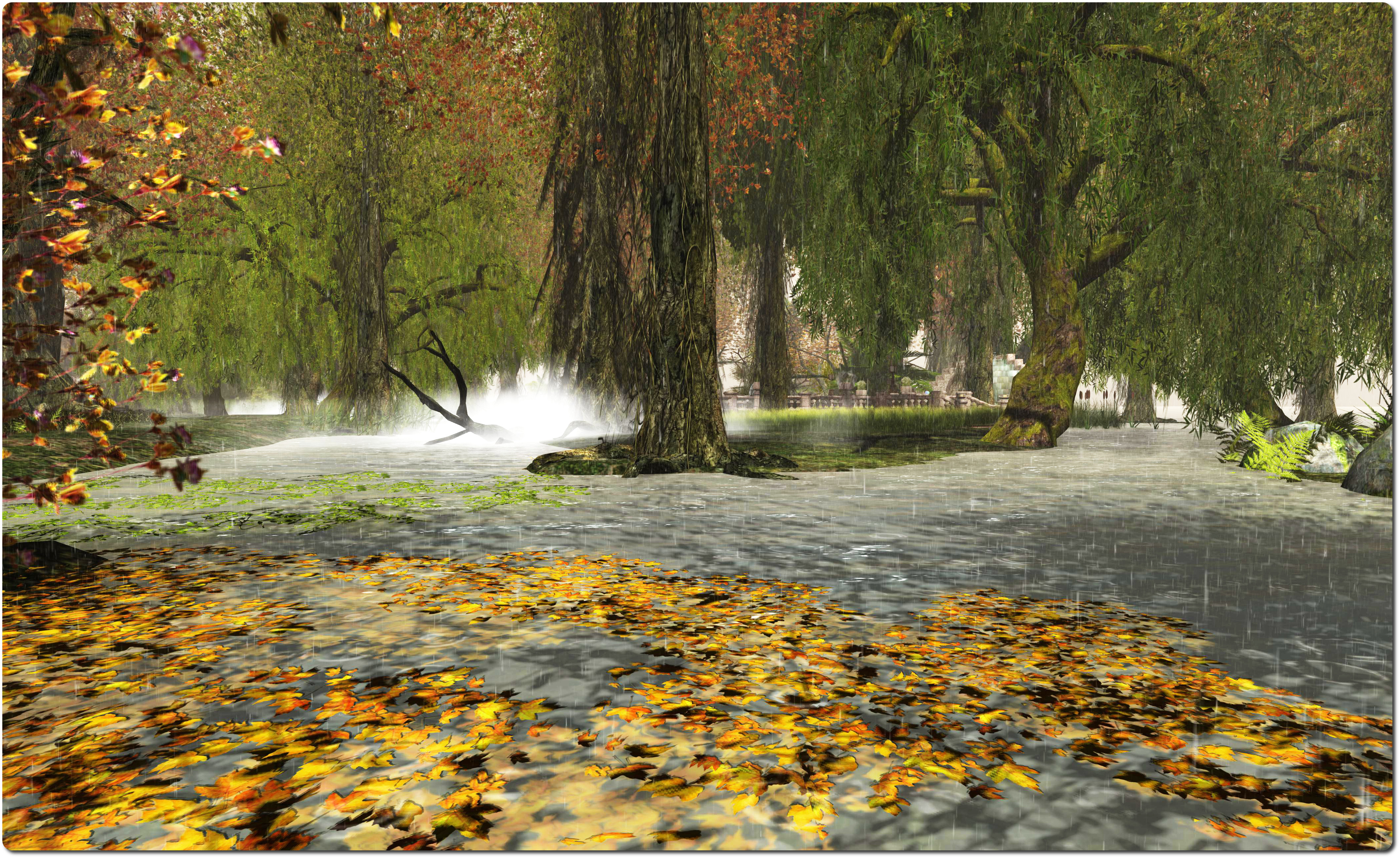 The Bayou first opened its doors – albeit it briefly – in September 2013. Designed by BuTToNs (pecandeluxe), it was a beautiful recreation of a bayou environment. At the time, it didn’t remain open long, although I did get to take a quick peek.

The doors re-opened to public access around the end of February, retaining all of its original beauty (with some small additions). As I’ve made several quick hops back since then, I thought it about time I actually blogged about it. 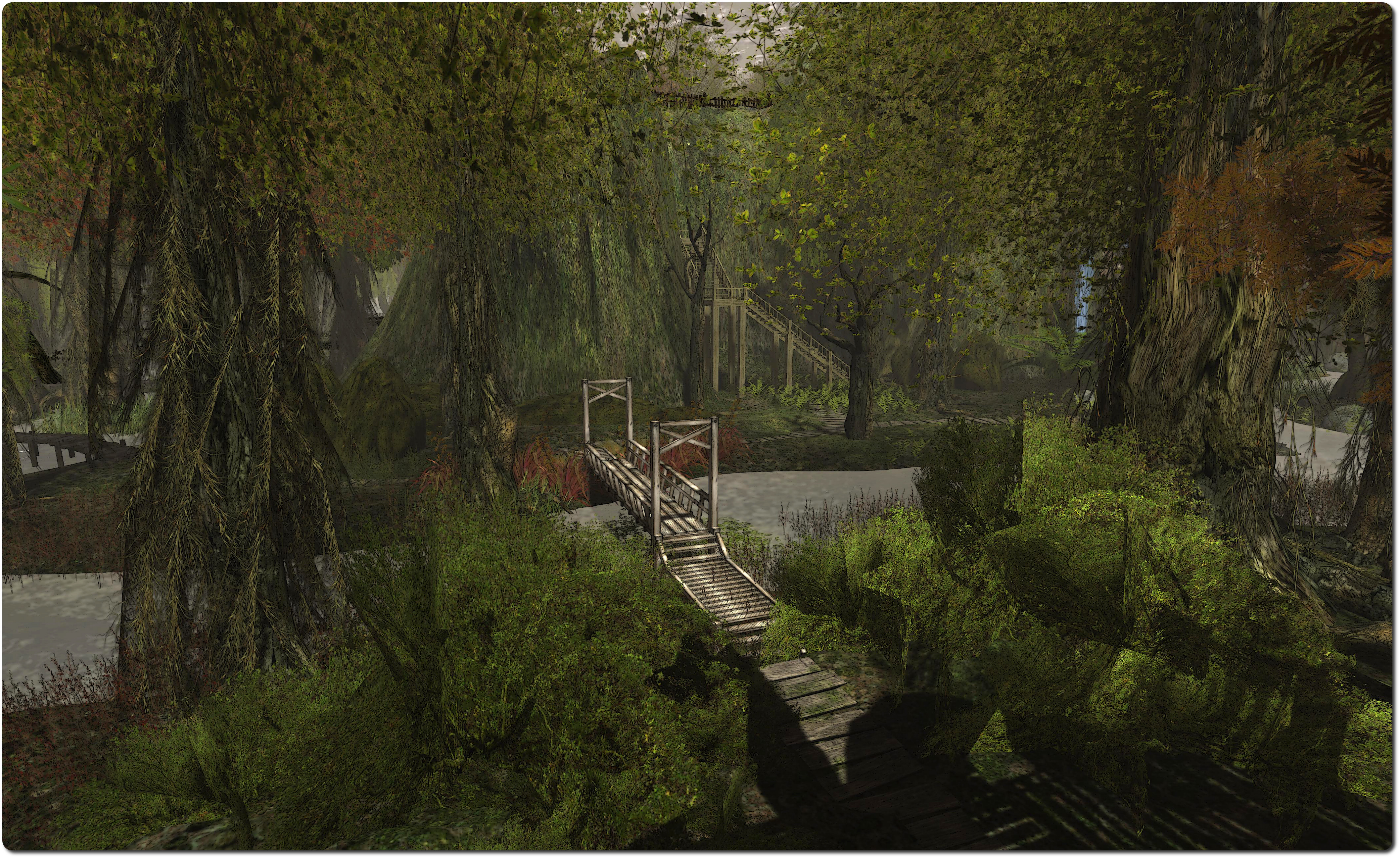 Those who love really natural-looking environments in SL should love The Bayou. The signs of habitation are minimal: there’s a ramshackle cabin and a tree platform, plus a seating area to one side of the region. but beyond these and a couple of other scattered indications, the majority of the region is given over to trees, undergrowth, dark, flowing water and wooden walkways over what might otherwise be waterlogged ground.

The wooden board walks lead the visitor around the region, little wooden bridges providing the means to cross the water – and avoid the alligators. You might want to take a brolly with you, as it is raining heavily in one place. Along the way you’ll pass a fair number of InTan dance systems – so those of a romantic inclination will find a welcome in The Bayou (and don’t forget the couples’ pose systems near the landing point, which allow you to explore hand-in-hand). 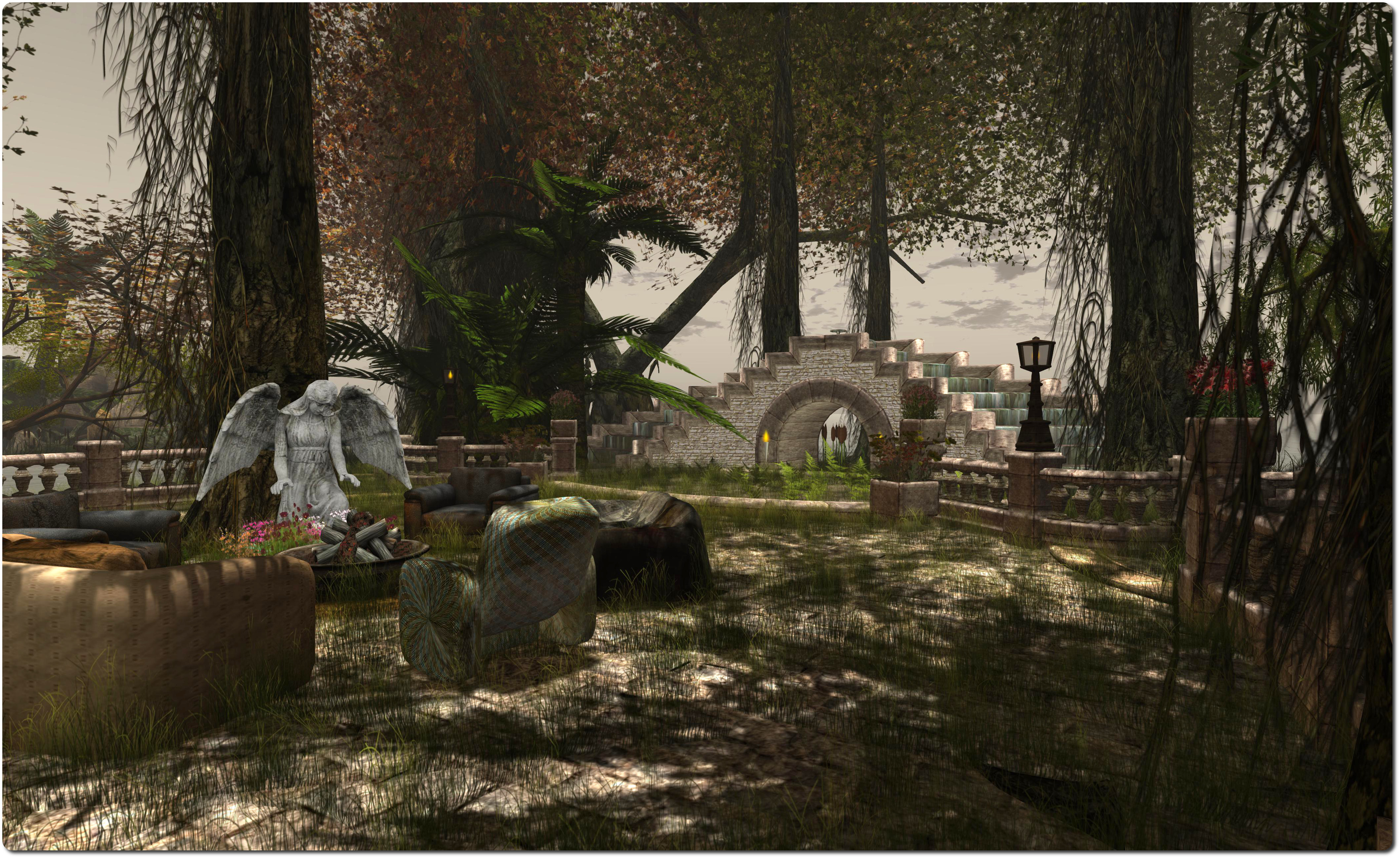 Wander inland, and you’ll eventually find your way to a couple of wooden stairways leading upwards. One will take you up into the hills on the far side of the region to the arrival point, where a path winds up to the start of the waterfalls. The other provides access to a grassy plateau where couples can again enjoy a dance.

There are some open areas down at ground level as well, but one of the things that makes The Bayou so attractive is that in places you can look around yourself and see nothing but trees and meandering water; with the ambient sounds, it really gives a feeling of being in the bayou. 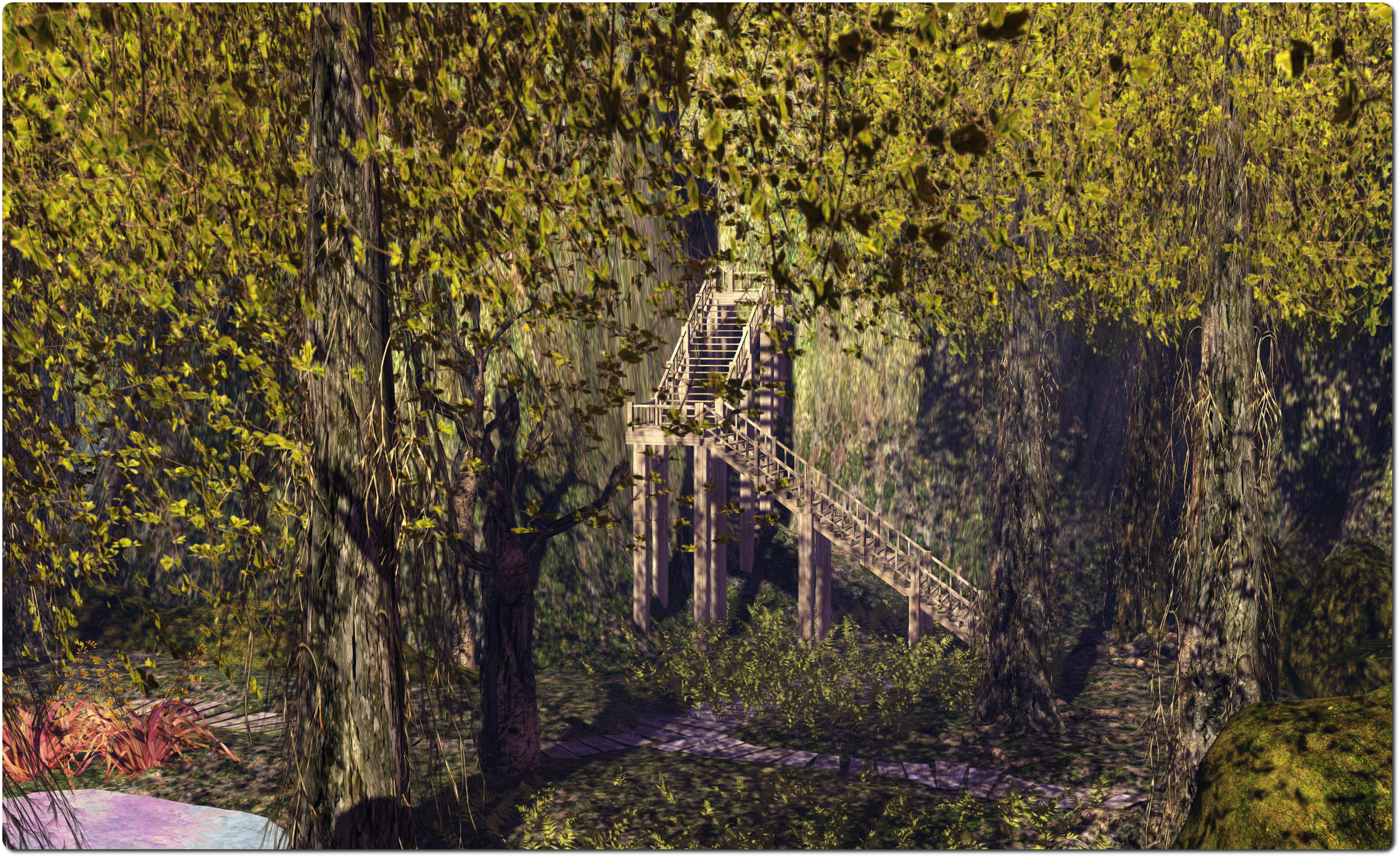 Several of the trees found in the region are the work of Serenah Raynier, who has a store and rezzing platform in the sky overhead. These can be reached via the teleport near the region’s landing point. The store offers the trees and other items for sale, while the rezzing platform offers the ability to view  / purchase prefab packs up to a full region in size.

Now, given this is a post about The Bayou, there is really only one way to sign-off, and that’s with a song.

Note: To all those who have been poking me about the big secret in the Firestorm video. Yes I am aware – admittedly after-the-fact, as I didn’t check the link at the time, so egg-on-face to me! However, Jessica informed me what was really going on not long after I’d blogged, but asked me to keep mum, as the hope had been that people would discover it for themselves (hence why I’m still not mentioning it here, although the cat is out of the bag elsewhere). There is yet more to come on this; again I’ve been asked to hold-off blogging on it to allow the fun to be had!

Yes, it’s April 1st, and time for the tradition of April Fools jokes. Last year, Firestorm hit the nail on the head with their Firestorm Mobile hoax, which was beautifully conceived and executed. In some ways, it was perhaps too successful, given the upset that came from some who didn’t pick-up on the hints throughout.

This year, they’re back with another video, introducing the Firestorm DUI.

It’s a cute video, but I can’t help thinking that it would have worked a lot more effectively as an April Fools joke had it been approached with the same gravitas as marked last year, and  leaving the reveal until the end rather than announcing the intention in the title and the opening few seconds of the video. Nevertheless, the video should raise a smile or two, and I also have to say…

The long-awaited next version of the Catznip Viewer™ for Second Life™, Catznip R9 will ship with its own built-in peer-to-peer crypto-currency, CATZCOIN™.

CATZNIP R9 users will be able to mine CATZCOIN while logged in without impacting viewer performance. The longer they use Second Life with Catznip the more CATZCOIN they will generate. CATZCOINS will be tradeable for L$, US$, Dogecoin, BitCoin and directly for virtual goods in Second Life via the CATZAPI™.

A Revolutionary Digital Currency for your Digital Second Life.

CATZNAP™ anti AFK wizardry ensures the most active SL users mine the most!

The “mug” link (there’s a hint there as well, in the use of “mug”, methinks!) will take people to a Cafe Press page (which is genuine) where anyone who enjoyed the joke or who wants to support Catznip and purchase merchandise. Proceeds from any sales will go towards offsetting costs involved with paying for the project’s VPS server. 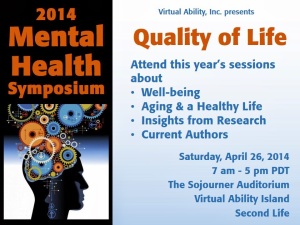 On Saturday April 26th 2014, Virtual Ability will be holding their 2014 Mental Heath Symposium, and both Gentle Heron and  Sister Abeyante from Virtual Ability have asked if I’d help spread the word – which I’m delighted to do!

The theme for this year’s event is Quality of Life, and it will take place at the Sojourner Auditorium on Virtual Ability Island. I’ll be joining them in passing-on news on speakers and presentations as the schedule is finalised.

The Mental Health symposium is one of two major events Virtual Ability host in-world each year, the other is the annual International Disability Rights Affirmation Conference (IDRAC), which is held later in the year.

Those wishing to learn more about either the Mental Health symposia or IDRAC can view the archives of past events as follows:

Virtual Ability, Inc. is a non-profit corporation, chartered in the state of Colorado, USA.  We are a non-profit tax exempt organization under section 501(c)(3) of the United States Internal Revenue Code. This means that for US citizens, contributions made are deductible as a charitable donation for federal income tax purposes.

For further information on the board of directors, please visit the Virtual Ability About Us page.