The server channel deployments were delayed 24 hours this week due to Monday May 27th being Memorial Day in the USA.  This being the case:

As noted in these pages, the Lab formally announced the forthcoming arrival of SSB/A on May 29th. This has prompted questions of “when?” Again, as I’ve previously reported, the Lab is proceeding cautiously towards a server-side deployment, even though they are encouraging people to swap to a version of their preferred viewer which is SSB/A-enabled sooner rather than later.

Currently, the two regions for TPV testing have been enabled with the new service and TPVs are putting the new capability through its places – and this has already revealed a reason for the Lab’s understandable reluctance to give out firm dates, as a potentially major issue has been identified.

SUN-74, raised on May 29th, shows that if you are wearing a MOD skin, hairbase or eyes and you enter an SSB/A-enabled region using a non-SSB/A enabled viewer, an alert will appear on your screen which, on clearing, is followed by an innocuous-looking prompt.

Clicking YES in reply to the prompt can result in the currently worn skin / eyes / hairbase to become irreparably corrupted, with a skin turning  a mixture of black / invisible and eyes turning white. Rebaking will not fix the issue. Relogging to an SSB/A-enabled viewer seems to result in the avatar rendering as a cloud, and / or ending up with a default skin and ruthed. Replacing the affected items (skin and/or eyes and/or hairbase, depending on which has / have been corrupted) with others from you inventory will fix the issue, but re-wearing the corrupted item(s) results in the avatar once more appearing corrupted (and again ruthed, if running an SSB/A-enabled viewer).

Again, this problem will only manifest itself when:

Nevertheless, the issue is liable to be considered serious enough to prevent any public enabling of the server-side SSB/A code until such time as the issue has been investigated further.

I asked Oz Linden on the status of the Materials Processing project viewer, which it had been hoped would reach a beta release status in week 21. He indicated that while progress was being made, the viewer was still with LL’s QA team, who were still pointing to bugs with the code which require addressing. As are other people at the Lab, as Maestro Linden again commented at the Server Beta meeting, “I found a materials viewer bug last night (fixed today), where my swimsuit wouldn’t render to people with certain graphics settings. That was considered a blocker for sure :).”

So we’re going to have to wait a little longer for the viewer to appear in a beta release.

Speaking at the Server Beta User Group meeting on Thursday May 30th, Maestro commented on an issue which is affecting Agni.

There is one medium-hot issue on the grid, recently  which isn’t a crash, but disconnects multiple avatars from the sim suddenly (which looks very similar to a crash from the viewer’s perspective). I found out this morning that it can also cause http-in LSL scripts to lose their URLs. The viewer disconnection happens because the viewer suddenly gets a 404 when it reaches the EventPoll cap.

When this happens, the affected user(s) is/are disconnected from SL as if the region has crashed, although no actual simulator crash has occurred.

The issue has been reported in the forums,  and takes th form of the user receiving the message: “You have been logged out of Second Life: This region may be experiencing trouble. Please check your connection to the Internet”. Checking the viewer log file will reveal 404 messages.

Whirly Fizzle indicated that Kadah Coba has produced a chart showing simulator crash and viewer disconnect rates over a 2.5 year period, and the sudden increase in disconnects since the start of May 2013 is readily apparent. 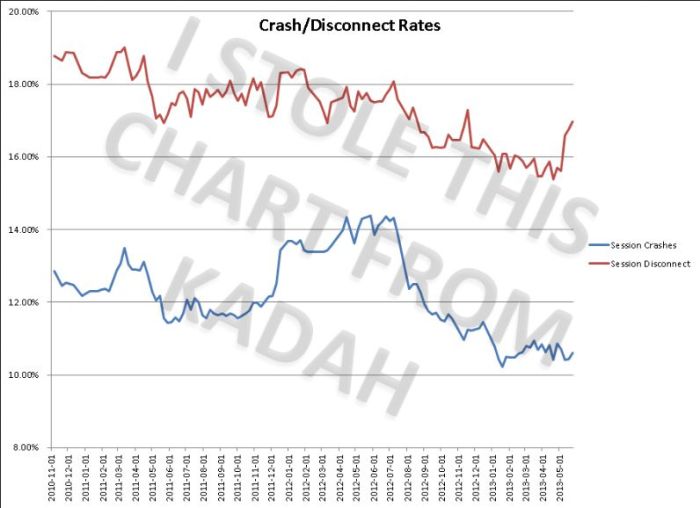 The good news on this is that a fix has been developed for the issue, and Caleb Linden has been testing it.