Kirstenlee Cinquetti has issued a further update to the S19 version of Kirsten’s Viewer – version S19 1.19.4 (407). Released on Thursday May 16th, 2013, the update primarily fixes a nasty cache crash when user settings and local cache are manually deleted.

There have been a lot of questions as to why the S19 (v1-style) viewer from Kirsten’s stable is being updates rather than the S22/S23 viewers. In a blog post accompanying the release, Kirsten/Lee gives an answer:

So I guess the most pertinent question is why? It is probably the most pointless one to answer also.

But lets just take a wild stab at it!

I need to be in SL occasionally so I need a viewer (Duh), V2 is dead sorry S22 it was fun, V3 is well lets just say it’s not my cup of tea. I could just download someone else’s viewer but thats not what I want.

I LIKE S19 it was and still is quick, its code in comparison to newer clients is simpler it has much more modest hardware demands I can merge from many sources more rapidly etc, etc, etc..
It ticks all my boxes, on a more personal note it’s NOT limited to Second Life.

That is important to me, so it may have bugs, it may not compile on macs very well… sorry.

But if I wish to drift around SL or jump into Opensim I can.. anyway hope that kinda answers some of my motivations, and why I share the corresponding installer.

As mentioned in my last piece marking the “return” of the S19 viewer, and people shouldn’t anticipate routine updates and improvements; as Lee indicates in his bog post, this viewer has been updated and is being tweaked purely to suit his needs – and rightly so.

A couple of notable changes have been made since version S19.1.19.4.(404), the last version I used. Preferences have been moved from their “traditional” location in the File menu to appear under the S19 menu, and Depth of Field (DoF) has been added to the Graphics tab, in a dedicated sub-tab.

Sadly for me, I’m unable to test DoF, as deferred will not run on my hardware set-up, no matter how I fiddle with AA (which was Lee’s suggestion to me after I’d encountered problems with the 404 build). But then, as I noted last time, while I’ve always like Kirsten’s Viewer, my hardware has tended to sulk badly when using it.

However, for those of you missing Kirsten’s Viewer, here’s yet another update for you! Going on feedback following my original piece on S19’s return (in comments, IMs and DMs), it’s good to know the viewer still has loyal fans!

The World Goth Fair started in Second Life on Wednesday May 15th, and will run through until the end of the month.

Some 75 merchants from across Second Life are participating in the fair, which is being held across two regions: Cursed (Adult) and Port Seraphine (Moderate).

As well as showcasing some of the top designers in Second Life who supply the goth market, the primary aim of the event is to raise funds for the Sophie Lancaster Foundation, a UK-based charity that was founded in the wake of the brutal murder of Sophie Lancaster, a young woman who was killed for being a goth. The event is also officially sanctioned by the organisers of  World Goth Day.

Anyone wishing to contribute prize items to the event (RL or SL items) can do so via the World Goth Day at Club Gothika web page. 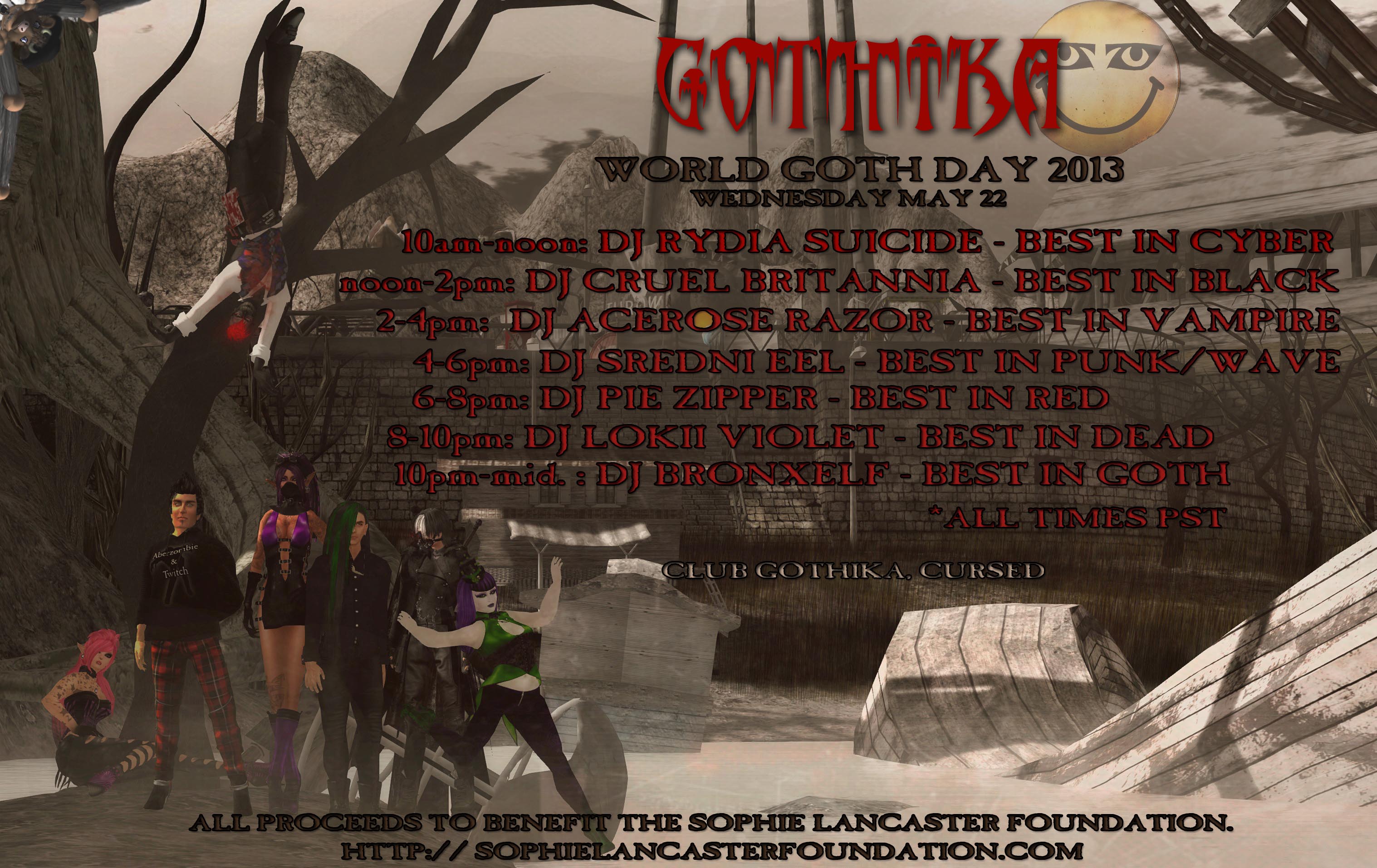 Update: 17th May: Gwyneth Llewelwyn provides an interesting and thoughtful analysis on the entire situation. DXEchange has indicated it has received LL’s e-mail of a potential solution, and is considering the matter.

Update: 16:55 BST: The e-mail to TPEs is apparently light on details, but includes the following statement: “We have approached several organizations to discuss a potential solution that would allow them to serve their customers within the bounds of the updated Second Life Terms of Service. We will soon blog to share more information about this solution, which we plan to extend more broadly as well.” So it would appear that the “potential solution” may initially be made on a limited basis.

MBKash has also indicated it has received the e-mail from Linden Lab, as has Gyndex.

There appears to be new movement on the situation involving third-party exchanges dealing in Linden Dollars following the recent change to the Second Life Terms of Service, and movement of a most confusing kind.

On the one hand, blog posts have started appearing on various exchange websites noting that they have received further information from the Lab, and that matters may be resolved in a manner which would allow them to resume the provisioning and exchange of Linden Dollars to Second Life users.

On the other hand, some exchanges are indicating that the SL accounts they use to handle their in-world dealings have all been suspended by the Lab.

On May 7th 2013, Linden Lab updated section 5.3 of the Terms of Service, which deals with the buying / selling of Linden Dollars and third-party exchanges (TPEs). While the ToS appeared to indicate that while such exchanges were not “authorised” by the Lab, the re-wording gave the impression that users could still use such exchanges while re-emphasising that doing so was entirely at the user’s own risk.

However, a blog post announcing the updated ToS change stated the that use of third-party exchanges was “not allowed” under the new ToS, and shortly thereafter TPEs started to receive e-mails from Linden Lab ordering them to cease dealing in Linden Dollars and also to remove / disable all in-world ATMs from SL with immediate effect. Third-party viewer developers were also contacted and told to remove any links to TPEs within their viewers.

As well as leading to a lot of speculation as to the reasons behind the move, the combination of mis-matched ToS update and accompanying blog post, together with the e-mail to TPEs has led to a lot of confusion and upset.

However, a number of exchanges have indicated that they have had further communication from the Lab which may allow their to resume operations. These include, at the time of writing, VirWox, CrossWorlds and Virtuateq (the latter’s update is in Dutch).

The VirWox update reads in full:

Good News: Linden Lab has approached us with a potential solution that would allow us to serve our customers within the bounds of the updated Second Life Terms of Service. We are in discussions with them and look forward to being able to share more information very soon.

We have received an e-mail today with regards the problem from Linden Lab. It informs us that there may be a potential solution that would allow us to serve our customers within the bounds of the updated Second Life Terms of Service.

As soon as I hear more I will let you know… and fingers crossed we can fix this problem.

It is not currently clear how many other exchanges have received similar e-mails from Linden Lab, which appeared to start issuing them late on Wednesday the 15th May, PDT, and so it is possible that updates may be forthcoming from other exchanges as the day goes on.

Quite what the “potential solution” might be is unclear. There has already been some speculation that it could be for TPEs to register as MSBs with the US Treasury Department’s FinCEN or perhaps providing evidence that they are properly registered under / adhere to any corresponding requirements within their country of operation.

Elsewhere the news is not so good. In the early hours of the morning on Thursday May 16th (European time), Jacek Shuftan reported on the Podex blog that:

Tonight  at 2.00 o’clock all my accounts related to Podex Exchange were put on hold by Linden Lab.

I really believed that the new ToS is meant to protect avatars from the risk of fraud.  That was my goal as well so I was looking forward to cooperate with Linden Lab. I could not imagine that over one night they would want to destroy our cooperation and everything what I built for 6 years of my virtual life. They did.

I believed that they would answer my requests to start discussion. They did not.

Similarly, DX Exchange are also reporting they have had accounts suspended:

Our avatars for our exchange activities are put on hold by Linden Lab, so there is no room for interpretation that Linden Lab wants to enforce the new TOS effective immediately.

That means that we are closed permanently as of today.We expect Linden Lab to enforce the TOS on all other exchanges today.

There has been some speculation that Podex accounts may have been blocked as a result of a decision by the exchange to continue to offer L$ in defiance of the ToS change  / e-mail, with Podex citing the 30-day “grace” period prior to changes to the ToS coming into force.

What is interesting here is that DX Exchange appears to have suffered the same fate as Podex (at least for the moment) after they had initially suspended operations, and then, according to Hypergrid Business, decided to follow suit alongside of Podex and others. This move apparently led to Bart Bockhoudt, co-owner of Gyndex indicting to Hypergrid Business that he would be objecting to the move by DX Exchange and seeking further clarification from the Lab. Whether this prompted some exchanges receiving account suspensions or not is also unclear.

However, one of the other exchanges which also opted, according the Hypergrid Business, to continue to offer Linden Dollars under the 30-day grace period cited in the ToS was CrossWorlds – who are one of the exchanges who have received the e-mail citing a “potential solution” from Linden Lab. Again, whether this is indicative that the likes of Podex and DX Exchange have / will also receive similar e-mails, and that the current account suspensions will be lifted / are the result of confused communications within the Lab, remains to be seen.

Overall, the result of these moves appears to leave the entire situation as confused as ever, and doubtless open to further interpretation and speculation. Expect further updates  as / when matters become clearer either via the Lab or through contact with the various exchanges.