WordPress.com just dropped a notification on me. Apparently, I’ve now been with them for four years today! While I was aware I’d made the move to WordPress in 2009, exactly when that happened isn’t something which has been uppermost in my mind, and so the notification came as something of a surprise. 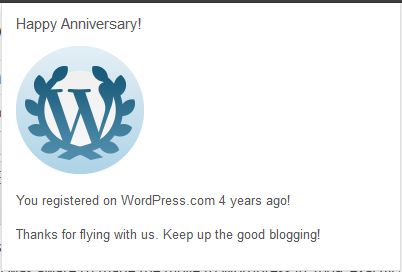 I first moved to WordPress having been with Blogspot. I did so because WordPress appeared to offer a lot more in the way of options and layouts. By-and-large, I’ve been happy with the result. The software is easy-to-use, and WordPress.com provide a useful set of free themes and a range of tools to make sure your adventures in the land of blogging are as pleasant as possible.

That said, for a product which is so dependent on people liking and using it, the company is at times a little obtuse when it comes to introducing updates to the platform (where have we heard that before? :)), with changes often implemented in such a way as to bring out ire and annoyance in a good proportion of users. I have to admit, I’ve had the odd growl or two over the last couple of years!

Even so, I do like to platform and have found that blogging with it is rarely onerous in terms of using the tools – importing from MS Word could be a little easier, perhaps – but cut’n’paste gets me past the worst of issues.

At the start of the month I finally got around to responding to Strawberry Singh’s “Why do I blog?” meme. It asked a lot of very pointed questions, the last question of which asked, “So, why do you continue to blog?”, to which I replied, “I can’t stand going cold turkey when away from my blog

While that is partially true – blogging is completely addictive, after all! – There is also another reason, one I hesitated to give as I didn’t want it to sound egotistical or anything like that.

I continue to blog because people appear to find something of value here. And that, as much as anything else, has kept me sitting in front of the keyboard and rattling off posts. It’s also what has helped to keep me engaged in Second Life, be it trying to report on what is going on in and around the platform or logging-in and exploring the grid.

I can’t promise to be blogging in another four years (or whenever WordPress next send me such a notification, as this is the first I’ve ever received of this kind!) – but I can say thank you to all of you who have stopped by these pages over the last four and making my blogging a lot more fun!

I’ve been covering Chic Aeon’s Machinima Open Studio Project (MOSP) for a while now. Originally a part og the LEA’s Artist-in-Residence programme in 2012, where I first reviewed it, MOSP has more recently become a permanent part of the LEA environs, with a dedicated home on LEA7.

Chic herself continues to revise and enhance the facilities in the region, adding additional sets, props and vista in order to provide machinima makers with the widest choice of opportunities to meet their filming needs. Overall, the best way to keep up with the updates and changes is via the MOSP blog. The two most recent updates include a full region cityscape and a dungeon environment, both of which are well-suited to a number of uses.

The City build is a simple but effective set, offering a backdrop of tall buildings, streets, a row of shops and a large open area suitable for a number of uses, such as a park scene or open-air concert scene, and so on. Cars parked along the roadside add a measure of additional depth and the shops themselves are suitable for outfitting – or could even double as a row of houses.

The Dungeon is another simple but effective build, offering a series of torch-lit rooms built of stone and with stone floors which could easily be taken as the island of a castle or the cellars of a great, old house or simple a goal or cells standing out their own (there is a desert-like landscaping outside).

Chic intends to keep on adding to the various sets as time goes on, and in introducing more in the way of mesh as a primary building option, which is not to stay the current prim builds will vanish any time soon.

“When I started putting the first MOSP together — and again when it was resurrected on LEA7 — I wasn’t terribly concerned with prim counts. I mean, a WHOLE sim!” she explains on the MOSP blog.

“But as more sets were added, those new land impact points became more important. So part of my self-described job description for the future will be continuously updating existing builds with the emphasis on super quality and low land impact mesh. My personal equation has something to do with visual impact in comparison to land impact costs. So some older prim buildings will certainly remain for a while. They have their own charm and are some of the most popular places at MOSP.

“But I suspect that in a year, most of LEA7 will be mesh, so much more can be fitted in.”

As it is, and especially with the ground-level vistas, she’s achieved a good balance between mesh and prim builds, presenting a range of sets and options which are suitable for both machinima filming and photography. With the arrival of the new city and dungeon sets, Chic has further added to the many opportunities MOSP offers the machinimatographer and photographer.

The sun dips slowly towards the sea, spreading shadows across a patchwork landscape of interacting footpaths which mark out a seemingly endless parade of green squares. Neat. Regimented. Empty.

On the water, the wooden piers also mark a series of tidy squares over the water, the tide occasionally slapping against their sides. For now, their lamps remain unlit and the track running beside them quiet.

Almost everywhere is still beneath the high, scudding clouds. Nowhere is a soul to be seen.

It is a time of quiet expectation. A calm before a coming storm of activity which will see the squares of green and blue transformed into the most amazing and awesome builds, all raised with a single purpose: to celebrate the 10th anniversary of Second Life. 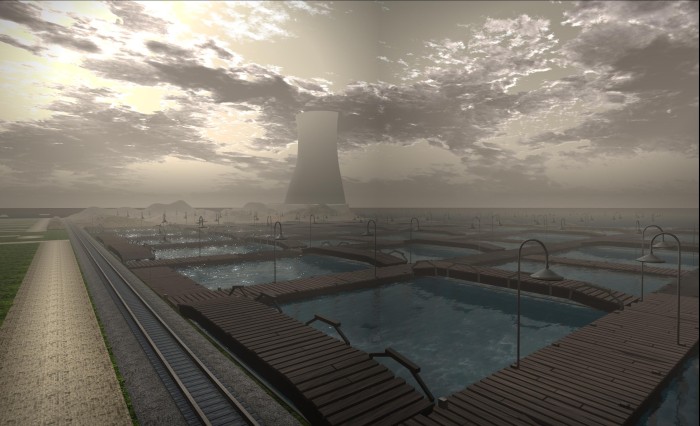 This is a last chance to see the regions in their almost untouched state. For on Sunday 26th May they will be open to the exhibitors who have waited so patiently to be a part of the celebrations, and so will begin the first of several weeks of building and arranging which will itself herald the coming celebrations.

Soon gardens, buildings, stages and other wonders will spring from the ground, and over – and under – the water wonderful builds will start to appear, and these regions, so quiet and calm when seen on the map today, will be a riot of green dots as builders, assistants, helpers and SL10BCC staff work to ensure everything is ready for the Grand Opening on June 16th.

And if truth be told, some of the work has already started … Over here I can see the land has been altered, sculpted into hills and other forms, where it is rumoured strange beasts may well roam; over there lay woods and trees in bloom; and over there. Oh my, over there stands … Well, you’ll just have to wait and see, for I’ve promised to say no more…

But the wait will be worth it, of that you can be sure. 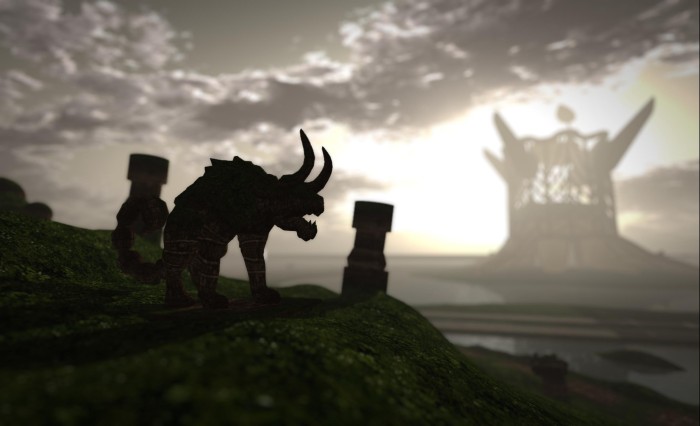