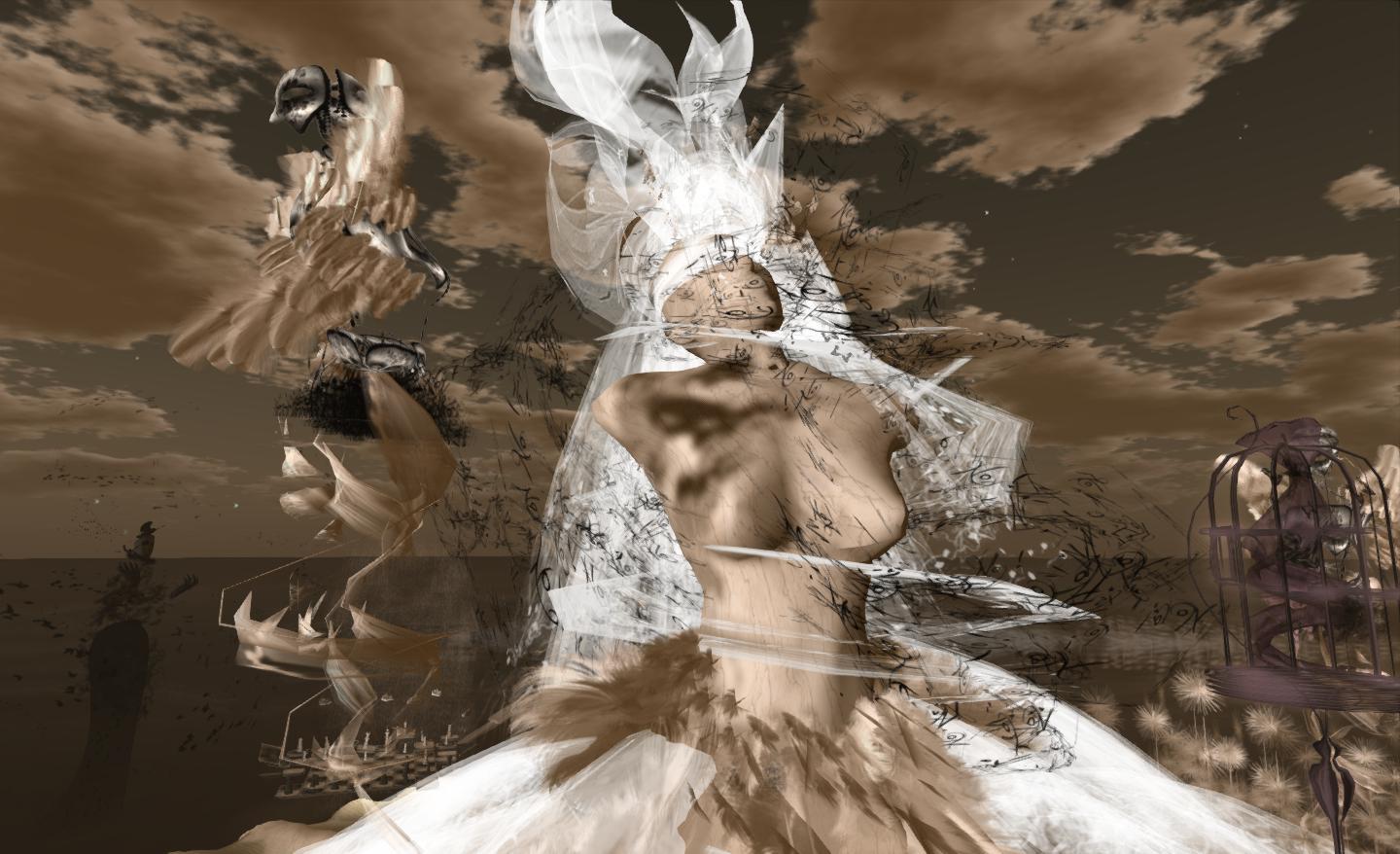 The are three distinct parts of the region. There is the ground-level art installation, which is both a veritable tour-de-force of sculpture and artistic expression in SL, and also visually stunning when taken as a whole work of art in itself, complete with windlight settings. Overhead, and high in the sky, are JadeYu’s store, Dark Tears, and her art gallery – both of which should very much form part of anyone’s visit to Song Bird. 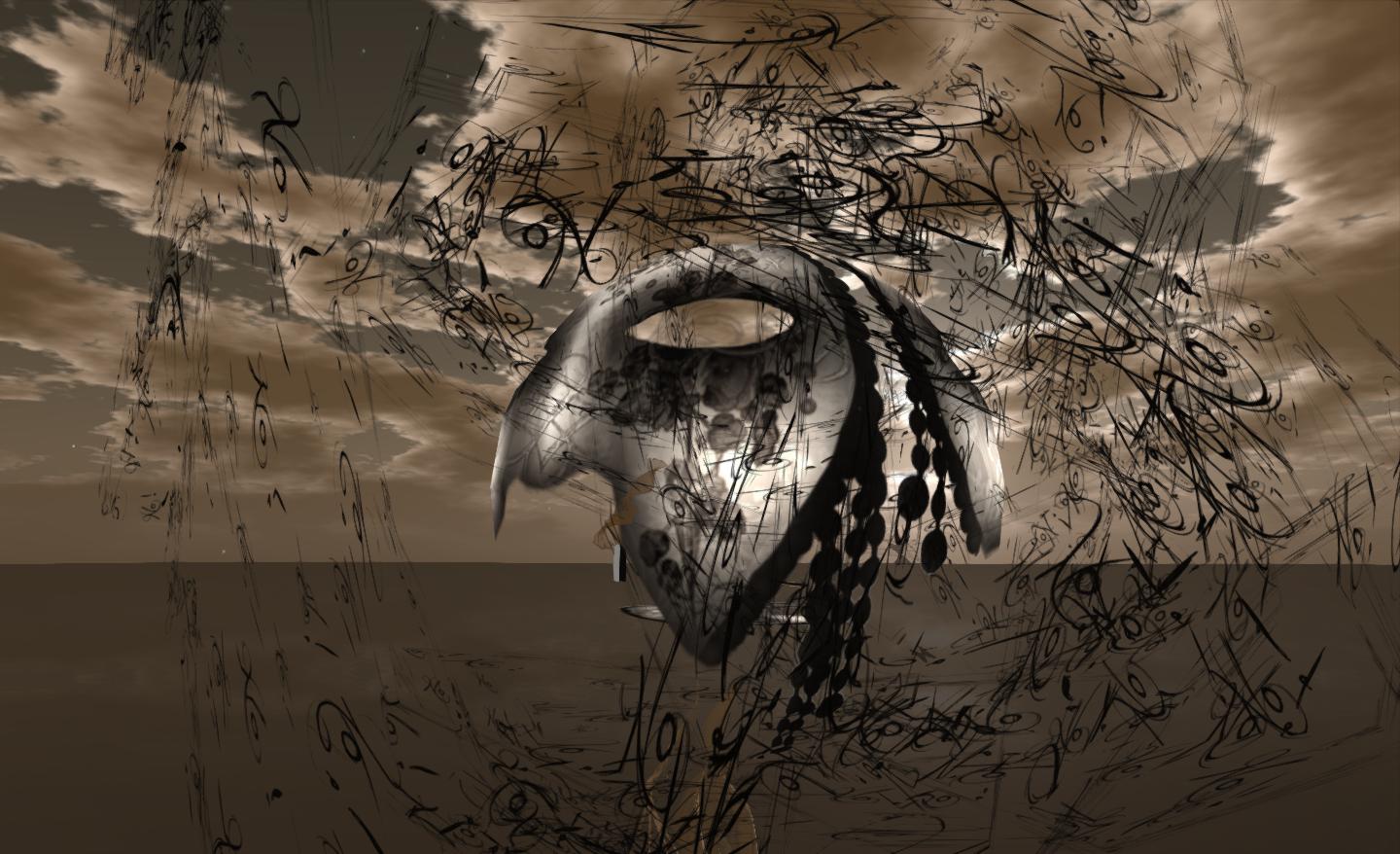 I cannot fully express how marvellous the ground level installation is. I’ve no idea how often JadeYu may change it (if she does at all), so if you’ve not seen it already, you should. Amazing really doesn’t cover it.

The pieces of the installation are on a grand scale, towering over a landscape which is covered in places by ghost-like dandelion seed heads which tower over you, or hanging in the air with a surreal precision. Such is the scale of things here that is some respects it is easier to look around via camera rather than explore on foot – but if you opt for this approach, be sure you do so carefully, as there is much here on more “normal” scales which can be easily overlooked when camming between the larger pieces.

Several of the pieces feature repeated motifs, which give a sense of theme to the various pieces, while other pieces appear to stand entirely on their own, leaving one with a very mixed set of impressions; JadeYu doesn’t provide any descriptive notecards for the various pieces, so the mind is free to offer-up its own interpretations – or to simply admire. 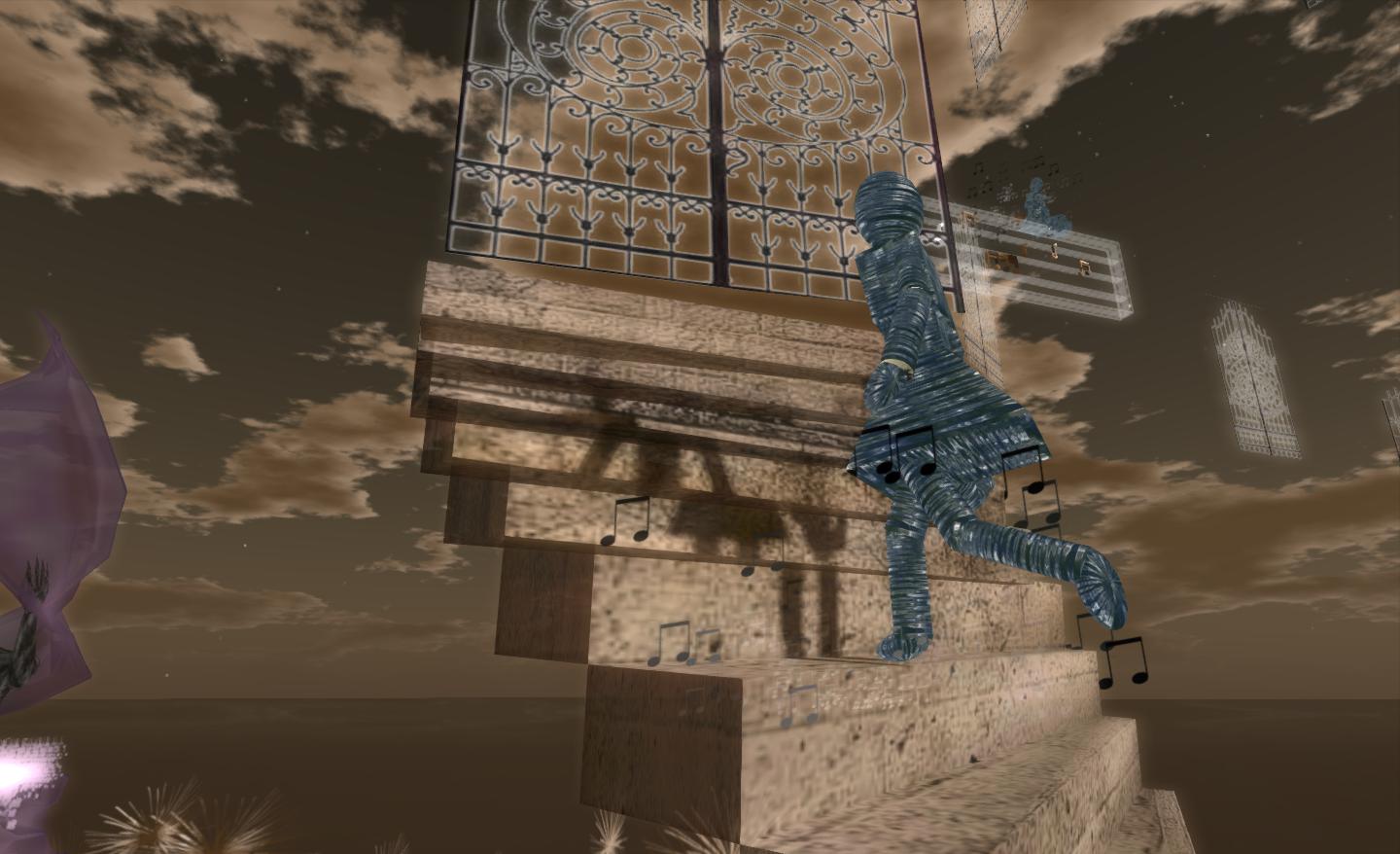 Many of the pieces are themselves vendors – hovering the mouse over them will display the L$ icon, and the prices at which they are offered are not going to break anyone’s bank – so those looking for sculptures and pieces with which to decorate their own regions / larger parcels with some very striking pieces of art may well find a visit to Song Bird more than worthwhile.

Overhead, the gallery displays a range of JadeYu’s striking paintings, which are also offered for sale as well and which would more than grace most homes. The pieces are all uniquely evocative and eye-catching. One thing I would perhaps recommend is that you turn your sound down before entering the gallery building – there is a background noise which I have to admit I found almost headache-inducing. 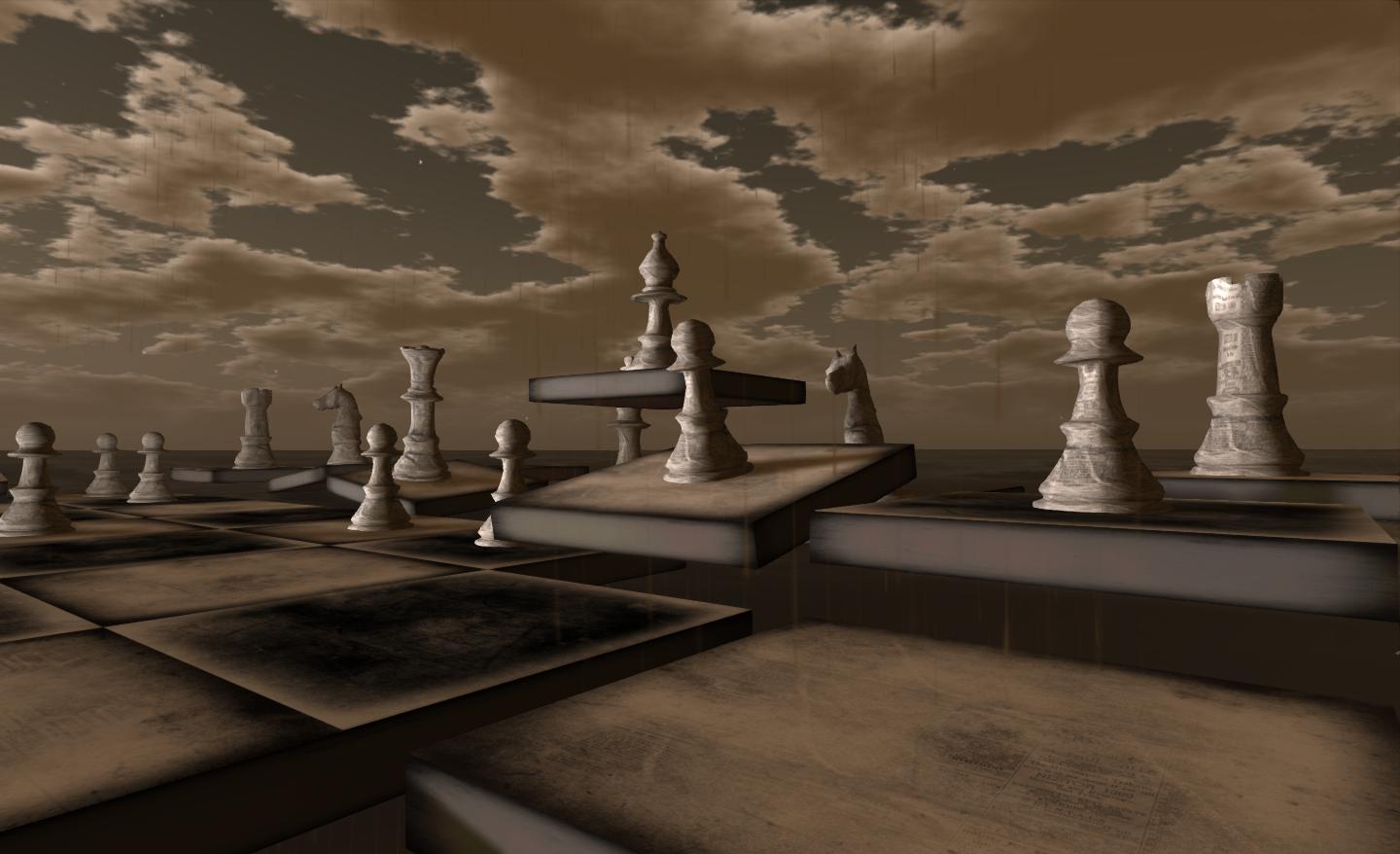 Also reached via teleport is JadeYu’s whimsical store – where having the stream active is liable to have your foot tapping (well it did mine, as I can’t resist the likes of the Andrews Sisters, Artie Shaw and Billie Holiday). Here you’ll find her skins and shapes, horns, wings and clothing, all in a cosy house atop a hill in a Halloween-style setting, and with the aforementioned music tripping out of a lovely pre-war radio by Lauren Bentham which is a delight in and of itself.

All-in-all, Song Bird is a real joy to visit, which anyone with a love of photography and art is going to find appealing.

Thoroughly recommended – just don’t forget the donation points and tip jars scattered around the region and at the gallery and store :). 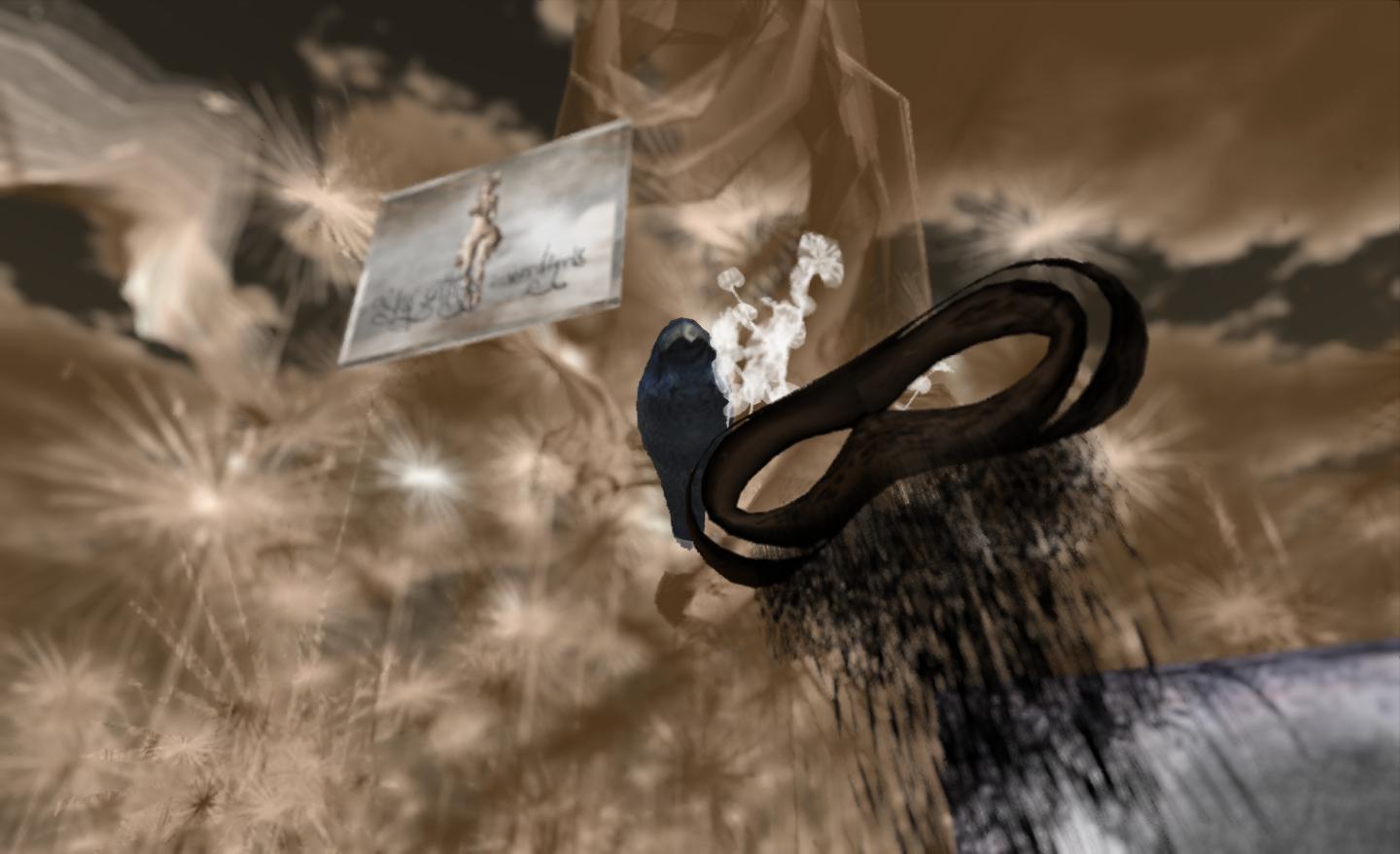