Sunday September 11th 2011 marks the tenth anniversary of the tragic events of 9/11 2001. To mark the date, numerous events are being held across Second Life throughout the day. There are also a number of Featured Events being held, and places within Second Life people can visit and join with others in remembering those who lost their lives during the terrible events of that day.

The following are provided to help those wishing to commemorate 9/11 in-world to do so.

Join the conversation and pay tribute to those who lost their lives to the tragic events of September 11, 2001 at this memorial.

Visit this tribute to those who perished in the attacks on New York City on September 11, 2001.

Arrive and suit up in the gear provided at the base of the stairs. Next, grab a nozzle and hose. Begin your ascent up 110 stories in honor of and in tribute to the fallen firefighters of Sept. 11. This tribute is sponsored by the Aero Pines Park Fire Department, made up of RL, active and retired firefighters who train and mentor in SL every day. More info at http://firehero.org/stairclimb/.

Located at Toronto, this display will feature the work of various artists joining together to remember the tragic events of 9/11. The art comes in all forms, and focuses on the concept of “Find Healing. Find Hope. Celebrate!” The event is part of many sponsored by Blue Angel Memorial Garden.

Join the London community as they memorialize 9/11 with a special Wings Over London Air Show, featuring planes and flights by the Second Life Golden Tiger Pilots, a squadron of the Second Life Flying Tigers. Events in Hyde Park include daily air shows, planes exhibitions, and music events. Event held Sept. 11-16.

Further 9/11 events can be found in the SL Destination Guide.

Dolphin 3  (official 3.3.0.3 (20418) is the latest V2/V3-based Viewer for Second Life to gain support for mesh object rendering. With it comes a raft of other features. So how does it look and behave?

As with all V2/V3-based TPVs, Dolphin installs directly, without the need to install any “official” Viewer. The installation is fast and smooth, and leaves you with the customary option of launching the Viewer directly upon the installation completing.

Given it is based on one of the latest code releases from Linden Lab, Dolphin 3 is the first to incorporate the new Second Life log-in screen – and kudos to Lance and the team for including it.

For those who have been using TPVs exclusively, the new SL Viewer log-in screen allows users to search SL for activities, events, destinations, etc., and log-in to them directly, without having to log-in to home / their last location, then run a search and then teleport. It’s a nice, tidy feature, and one I’ve reviewed previously. Not everyone will find it useful – but it would be nice to see it more widely available for those who do.

Once logged-in, Dolphin 3 presents a very V3-like UI, with some subtle differences. The Navigation Bar gains a new button – ENVIRONMENT – while retaining LAND, while the toolbar and the bottom of the window retains the INVENTORY button from Dolphin 2.

The inventory button is something that has been seen elsewhere in V2/V3 TPVs, providing a means of quickly accessing the Inventory slider of the Sidebar. Dolphin 2 has always approached things a little differently, and in a way that could appeal to those who have no great fondness for the Sidebar – it opens a dedicated Inventory window floater.

What’s more, clicking on the Inventory Sidebar tab doesn’t close the floater – it still opens and closes the Inventory slider, as per “normal” Viewer 2 behaviour. Working together, both the button and the tab thus allow for two Inventory windows to be opened with the minimum of effort, thus overcoming one of the major complaints concerning V2/V3. I’ve always felt this to be a smart move, and it is good to see it being retained in Dolphin 3.

The Environment button provides quick access to an updated set of Windlight settings, etc.,for the sky.

Mesh object rendering is perhaps the major reason for Viewer 3, and by extension, the changes we’re seeing to Viewers in general at the moment. Dolphin 3 renders mesh objects as well as V3 or any other Viewer; I used my familiar examples from the Beta grid, and they rendered without issue.

Like all Viewers that can render mesh objects, Dolphin 3 includes the new prim count / PE counts in the edit menu.

Also as with the majority of  TPVs at present, Dolphin 3 does not have any upload feature for mesh objects.Hopefully, this will change in the future for all TPVs that currently do not have the capability; but as I’ve mentioned ein the past, for most people the capability to see mesh objects is what matters, rather thean the ability to upload it.

END_OF_DOCUMENT_TOKEN_TO_BE_REPLACED 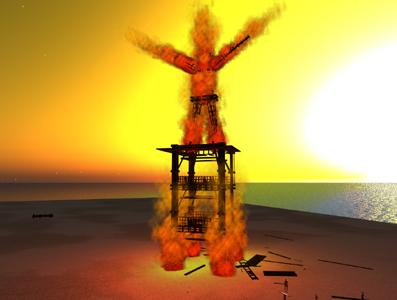 The second Burn 2 Land rush will take place on Saturday 10th September, so if you if you wan to have a camp at Burn 2, so if you missed out in the two Round One sessions, now is your chance to claim a campsite.

Here are the details:

If you have any questions, please contact Kev Sweetwater or Diana Renoir in Second life.