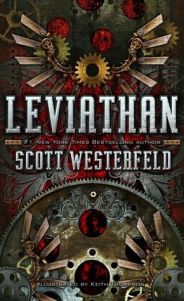 Prince Aleksandar Ferdinand, the would-be heir to the Austro-Hungarian throne and part of the Clankers, has spent his life facing an uncertain future: because his mother was of common blood, he has been barred from taking his father’s title in the fullness of time.

But when his father and mother survive Gavrilo Princip’s assassination attempt in Sarajevo only to be poisoned later the same day, Aleksandar finds himself the centre of intrigue. Despite the fact that he has no legitimate claim to the throne, the Germans are intent on neutralising him, fearful that he might nevertheless unite the people behind him, possibly fracturing the alliance of nations forming the Clankers.

Forced on the run aboard a battle-torn war machine crewed by a handful of men loyal to his late father, Aleks encounters Deryn Sharp, a young woman who has disguised herself as a boy to serve aboard British Air Service Leviathan, a living whale flying ship.

Despite their differences, and with the inevitability of war darkening every horizon, Aleks and Deryn embark on a fantastical, around-the-world adventure that will change both their lives forever.

Join Gyro Muggins as he dives into Scott Westerfield’s 2009 novel of an alternate past.

When the Jones family move into a Victorian house that has been converted into a set of flats, and her parents always busy and wrapped in their work, young Coraline sets out to discover all she can about her new home.

Along the way, she meets a pair of retired actress sisters, an old man trying to train a mouse orchestra, and a door that, unlike all the others that lead somewhere, oddly opens onto a brick wall.

Until the day it doesn’t, and instead opens onto a hallway leading to another world.

It’s a world just like her own, but also very different. The flat she enters looks just like her own, the neighbours are just like those she has met – but oddly younger – and the mother and father she finds within the “other “home dote on her: marvellous toys, magical books and wonderful food.

This other home and the parents within it are all that Coraline has ever wanted – until her other mother tells her she can stay and live forever – if she will have buttons sewn into her eyes. Scared by the request, Coraline returns to her real home, only to find her parents now gone. Realising they have been taken by her “other mother”, she realises she must return along the hallway and risk her future in order to rescue them.

Across the worlds of Shadow, Corwin, prince of blood royal, heir to the throne of Amber, gathers his forces for an assault that will yield up to him the crown that is rightfully his.

But, a growing darkness of his own doing threatens his plans, an evil that stretches to the heart of the perfect kingdom itself where the demonic forces of Chaos mass to annihilate Amber and all who would rule there.