Tea-time at Baker Street sees Caledonia Skytower, John Morland and Kayden Oconnell open the pages of the second full-length novel by Sir Arthur Conan Doyle featuring Sherlock Holmes and John Watson. Originally commissioned for Lippincott’s Monthly Magazine, for which it was serialised under the original title The Sign of the Four; or The Problem of the Sholtos. This was reduced to The Sign of the Four in later serialisations and when published in book form in 1890 – a title which itself was further abbreviated to The Sign of Four for various film and television adaptations. 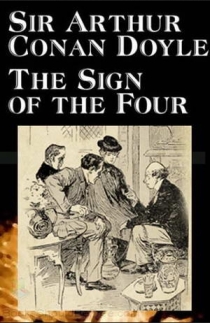 In 1888, Mary Morstan comes to Sherlock Holmes seeking his assistance in two matters. The first is with regards to her father. Having returned safely from India in 1878, Captain Arthur Morstan had arranged to meet his daughter at the Langham Hotel, London – but he had vanished from the hotel prior to her arrival. In the decade since, no trace of his whereabouts has ever been discovered.

However following his disappearance – and possibly pursuant to it – is the second reason for Miss Marstan’s visit. Every year from 1882 onwards, she has been in receipt of a single pearl, which started arriving after she had responded to a strange newspaper advert inquiring for her. The latest such pearl to arrive had come with a letter, indicating she had somehow been wronged, the sender asking to meet with her.

Holmes discovers that the pearls started arriving shortly after the death of a Major Sholto, who served with Arthur Morstan in India. His investigations leave him convinced there is a complex set of connections between Morstan and Sholto, which involves an Indian fortress, the names of three Sikhs, an Englishman by the name of Jonathan Small and Sholto’s two sons. If all that weren’t enough, it would seem that greed and treasure may lay at the heart of matters..,

Europe, the 17th century: nations are ravaged by the Thirty Years’ War, driven by religion and engulfing most of the Great Powers. Weary of the fighting, disillusioned, faithless and cynical, Ulrich von Bek, the War Hound, deserts his troops and travels through a Germany ruined by the war and religious persecution.

Coming to a strange forest, he finds within it a castle which appears to have escaped the war. He decides to seek shelter within its walls – only to find this is no ordinary castle. The lord within it is none other than Satan himself.

Von Bek discovers he has been allowed into the castle so that Satan might seek his help. In return for his soul, the Devil asks him to seek out the Cure for the World’s Pain, so that Satan might use it as proof to God that he wishes to be reconciled with heaven.

The hosts of Hell, however, aren’t that keen on the idea of reconciliation…

Introduced in Serafina and the Black Cloak, the titular heroine had, up until the events of that story, lived a secret life in the basement bowels of the manor house on Biltmore Estate. However, she was forced to reveal herself to the estate owner’s young nephew in order that together, they might discover why the children on the estate were mysteriously vanishing.

Now, just a few weeks after those events, Serafina and her new friends must confront a new danger, one worse than the Black Cloak.

In doing so, they well face tests that will strain friendships, while Serafina learns more about her unique talent and abilities, allowing her to grow from introspective “other”, to a young girl accepting of herself. Nor is she alone in her growth; Braeden also is able to come into his own, understanding his own particular gifts,

Intended for younger readers, the Serafina books have a richness of prose and an approach to storytelling guaranteed to keep readers – and listeners – of all ages enthralled. Join Caledonia to find out more!

Shandon Loring delves into Noel Magnier’s 2001 selection of stories more formally known as Is That You Boy?: Humorous short stories of growing up in Cork, Ireland in the 1940’s and 50’s.

Within it, Magnier recounts the exploits of a young street gang in the Cork of the 1940s and 1950s as they scheme and scam to generate pocket-money for themselves – generally (for the reader) with hilarious results. Written with wit,  and an ability to weave a good yarn in a manner guaranteed to light up winter evenings, Noel Magnier brings what could at times be the hard years of 1940s and 1950s Ireland vividly and warmly to life.

The featured charity for November-December is Reach Out and Read, a non-profit organization that gives young children a foundation for success by incorporating books into paediatric care and encouraging families to read aloud together.

One thought on “Of signs, satanic quests, shape-shifters and childhood scams”