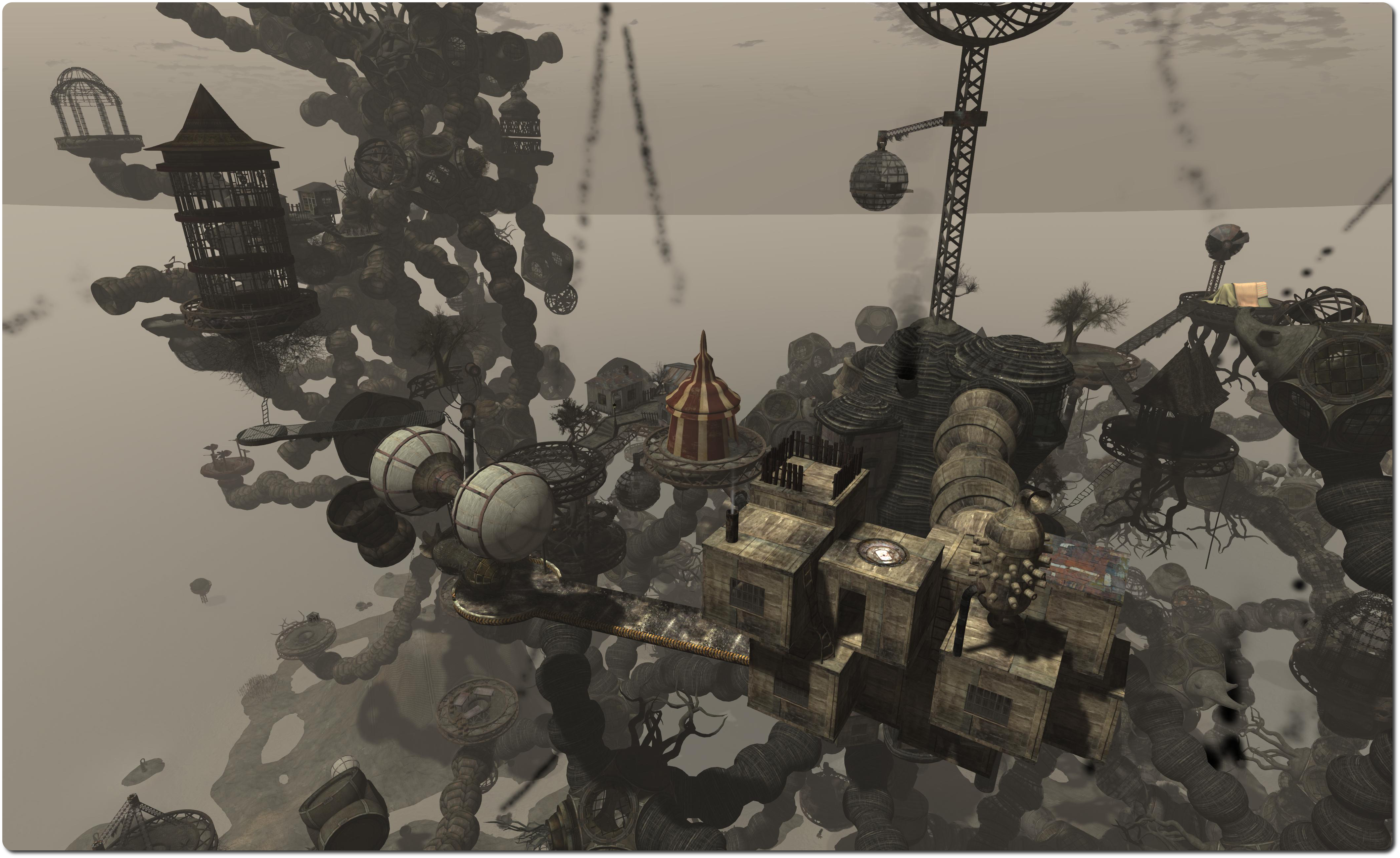 A Petrovsky Flux, a collaborative piece by Cutea Benelli and blotto Epsilon and curated by the University of Kansas at their Spencer Art Museum region in SL, has been a popular destination since it opened in around 2010. It’s also, I’m somewhat ashamed to say, a destination that has been on my list of places to visit for a good while now, but I’ve never actually managed to get there.

However, as it has been in the news of late, both in notices circulated in-world and in blog posts. So I decided to hop on over and take a look – and see if I could find out what was going on. 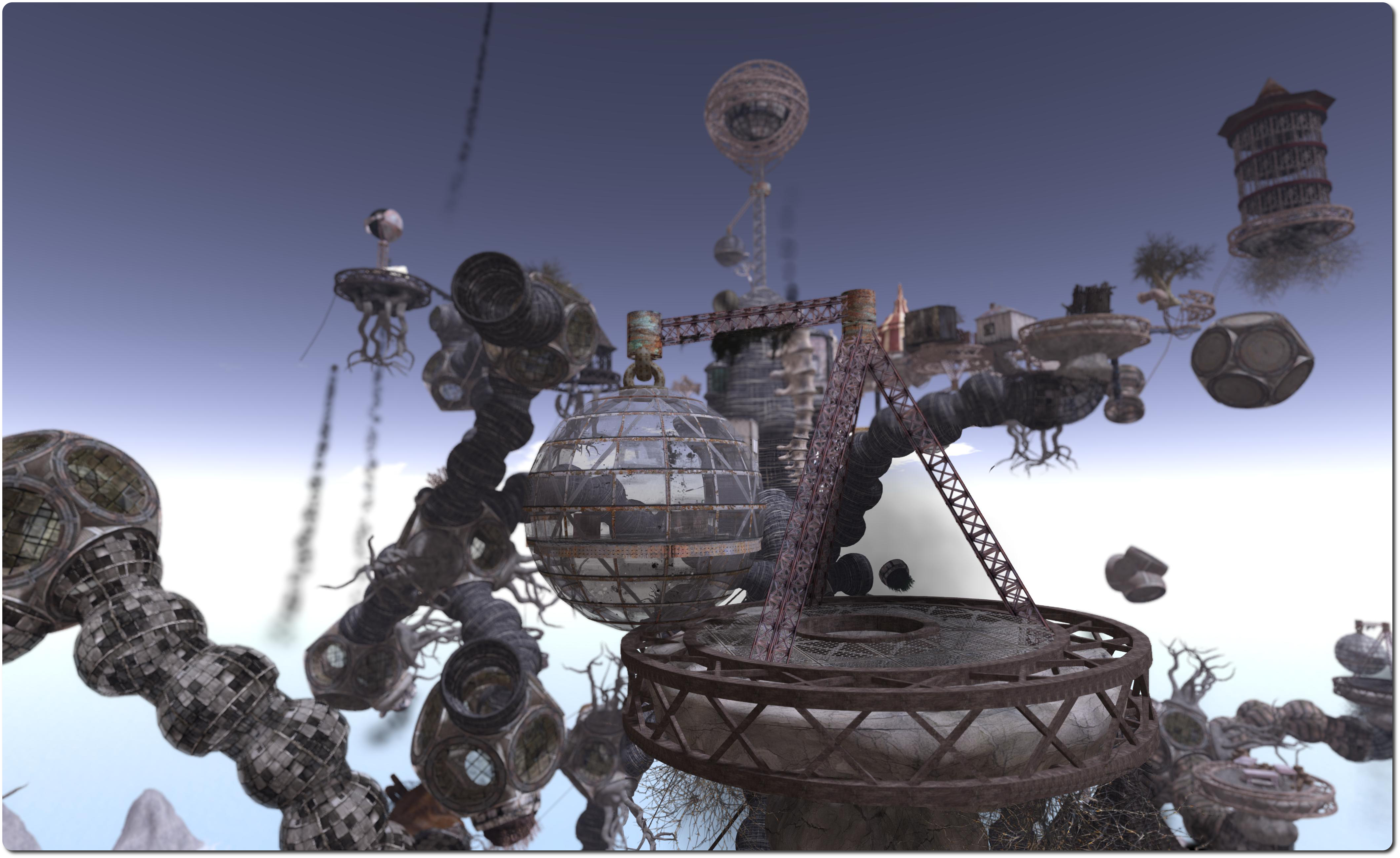 For those unfamiliar with the installation, I’ll borrow some words from Steve Goodard, the Spencer’s associate director/senior curator of Prints & Drawings, who overseas the Museum’s region in SL:

A Petrovsky Flux is a cluster of devices that grow, assembling themselves from modular units, only to blow apart and rebuild themselves. Each time they rebuild differently so the overall flux is, as the name implies, constantly changing. Visitors … can also explore the inside of the organic architecture, and they also receive a free “noggin protector” — a miniature version of the flux that is worn on the head to protect against falling debris. The project takes its name in part from a previous project, the “Bogon flux,” and in part from the “Petrovsky lacuna,” named for Russian mathematician Ivan Petrovsky.

The “noggin protector” is well advised, as this is living art in the most literal sense. As Steve states, it is constantly building and falling apart, building and falling apart, and each rebuild is unique compared to the last. “Organic” is also an appropriate term to use with the installation, many of the elements are spherical in form, and when joined, result in undulating, hollow structures you can travel through and which from the outside resemble segments of a gigantic worm. These are often topped by dodecagon-like pieces which look like they could be maws and  / or multiple compound eyes. 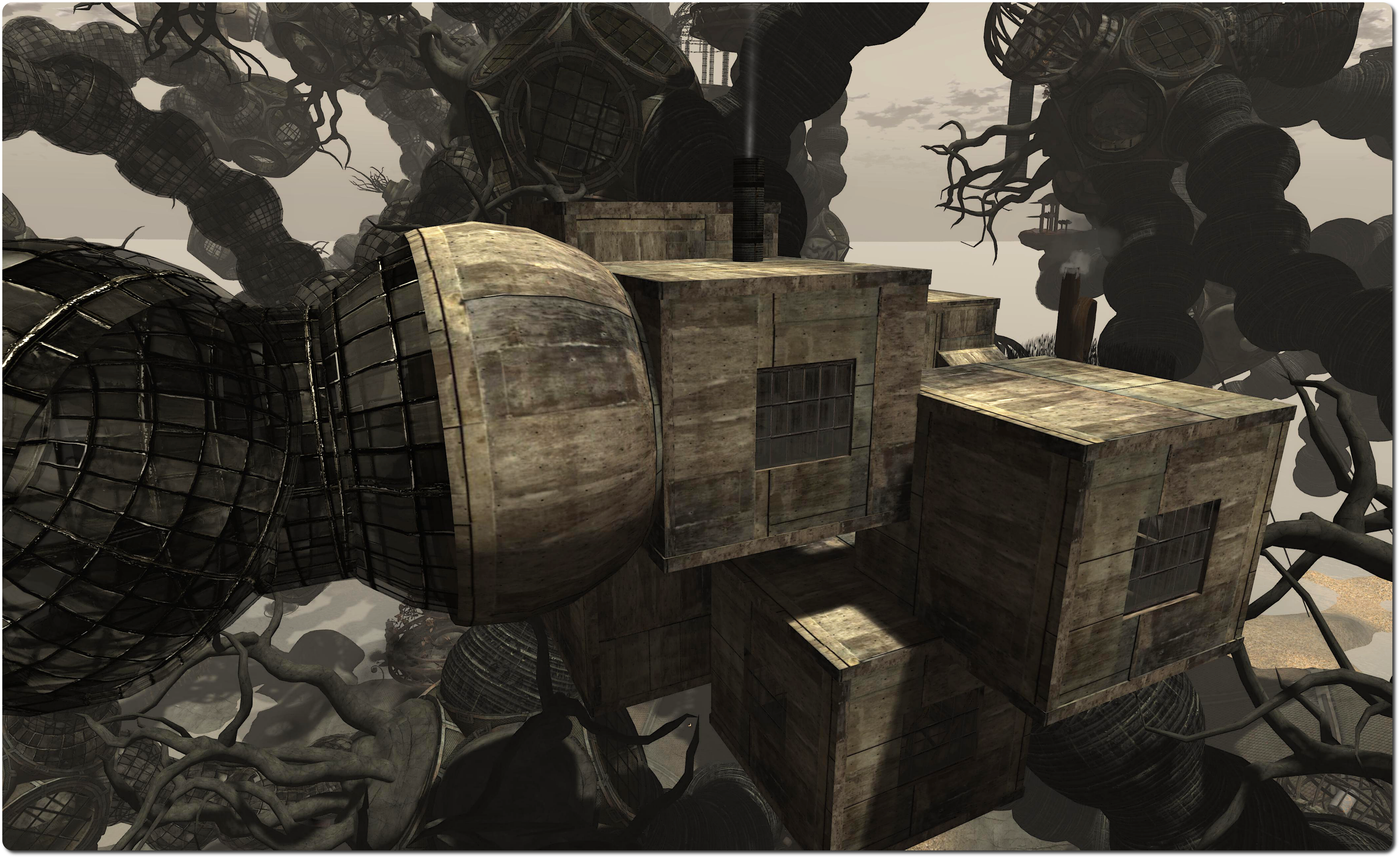 There is also something a little Gilliam-ish about the installation. Sheep and pigs are prone to flying past suspended beneath clover-like rotors (you are offered a tiny version of one of these “Henrycopters” to wear as a gift, along with your noggin protector). There are also spring-loaded armchairs that will carry you around the region, boucning randomly here and there.

Amidst all the chaos are islands of relative calm which survive the construction / destruction cycles, offering places to sit, including outdoor cafés where the unfolding spectacle can be observed; and places of reflection, such as a little Buddhist shrine. Do be warned, however, given the industrial nature of the design, there’s as least one dump which may be toxic in nature… 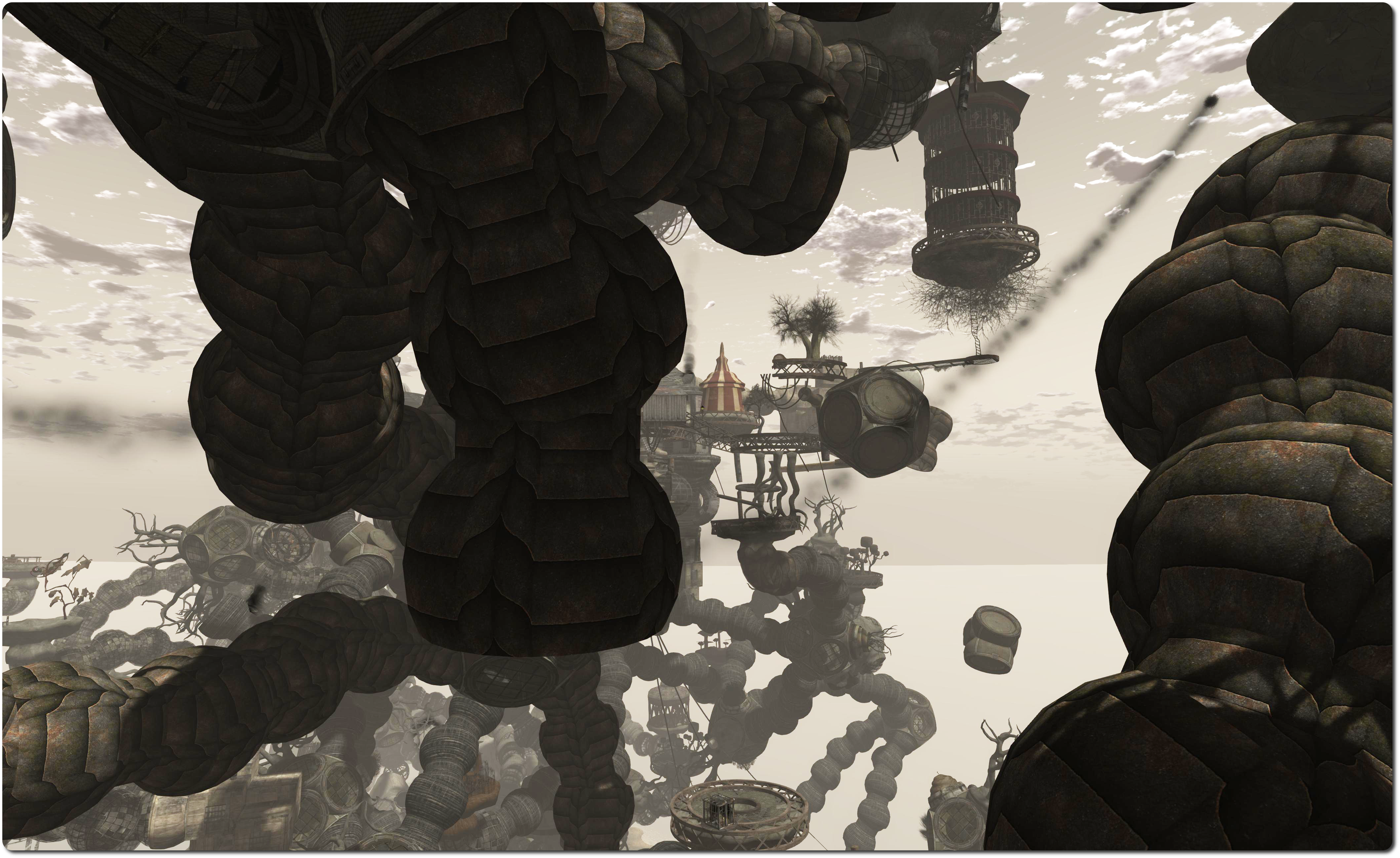 The installation has been in the news a fair bit of late, as mentioned towards the top of this piece, with notices circulating over its impending closure, together with blog posts on the matter. Quite why it should be closing has been a little confusing, as information has been prone to shifting and changing over the last few days. Initially, it appeared to be due to an issue of billing; however, I’ve been in contact with the Spencer Art Museum, and assured this is not the case.

Right now, and without delving into specifics, it is reasonably fair to say that any decision over the future of the Flux still lies with the Museum and with Cutea and blotto. It may yet be than in order to survive, the Flux will need to find a new home; it may equally be that it is safe where it is. I’ve been promised I’ll have word as soon as decisions have been made by the Museum.

Whichever way it goes, this does open-up a wider issue regarding the preservation of long-standing builds and installations which have come to be regarded as a genuine part of SL’s history. As Saffia Widdershins correctly points out – Keeping great sims on the grid is not Linden Lab’s responsibility. It is ours. But how this can be achieved is a complex subject in its own right; even if some form of resident-led funding mechanism can be established to fund regions, there are many thorny issues remaining, as Saffia points out in responding to comments following her post. 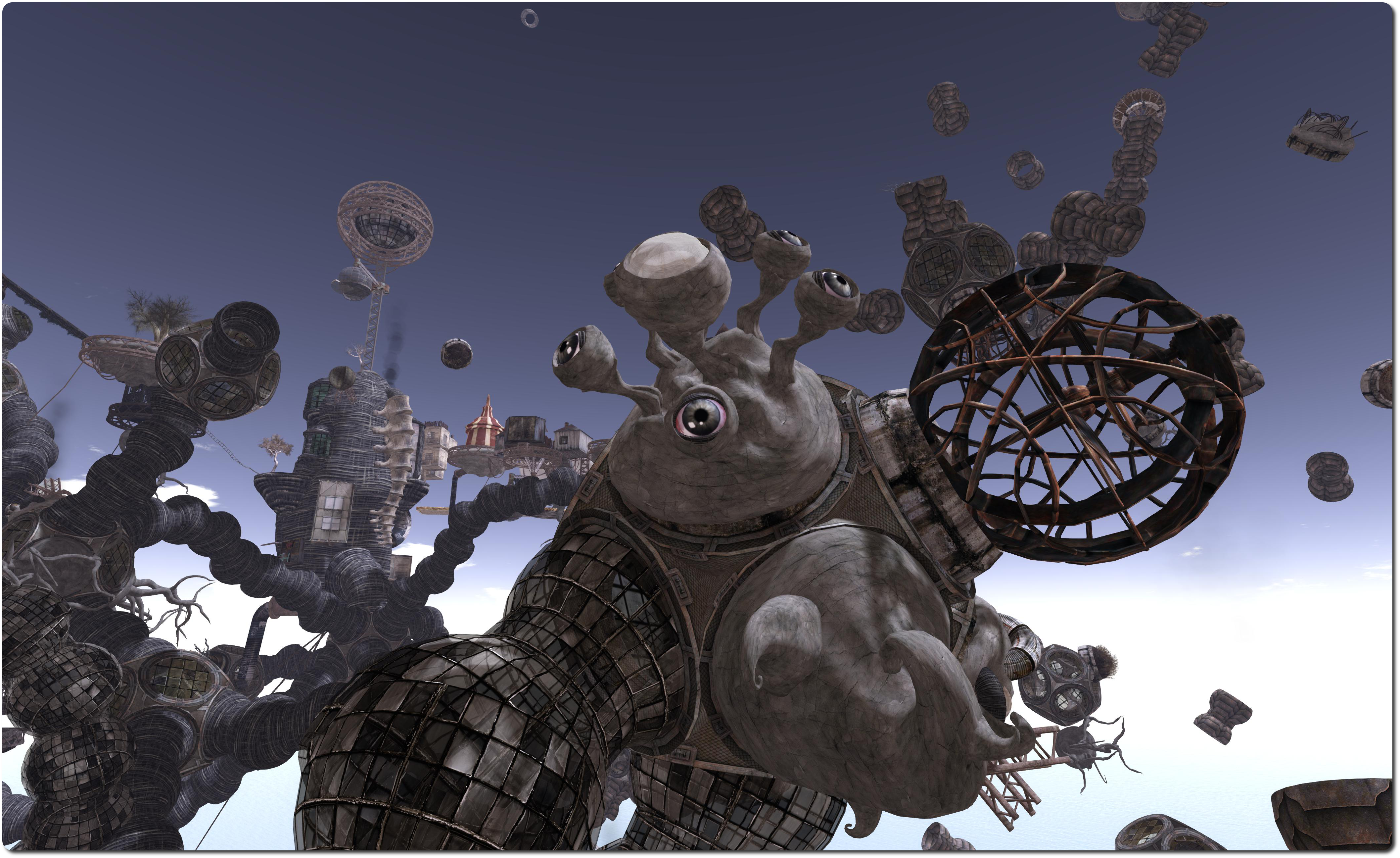 For example, how it is determined what should be saved and what should be allowed to naturally die? Who should be the arbiters of fate? Why should they have more say than others? How are vested interested best avoided? Should the LEA perhaps have a broader remit where art is concerned? If so, what of all the other region types considered worthy of preservation – role play environments, public parks, and so on, which over time may have significantly contributed to the betterment of Second Life?

This is a subject worthy of debate and discussion. and while matters relating to Petrovsky Flux may not be as Ziki first thought – and through no fault of her own – she has also started putting some thoughts together, discussing ideas in person with others.  But in the meantime, and if you have yet to see A Petrovsky Flux – even if it does prove to have an assured future at the Spencer Art Museum’s region, I strongly urge you to visit sooner rather than later. You will not be disappointed.

To encourage you, I’ll leave you with Toxic Menges’ brilliant video of the installation.

5 thoughts on “Petrovsky’s future in Flux?”