Monday August 27th saw NASA host another news briefing on Curiosity’s progress, which included some amazing new images and well as updates on SAM and recent manoeuvrings with the rover.

The briefing started with a message “from Mars”, in the form of a recording of a greeting by NASA Administrator and former astronaut, Charles Bowden. Carried by Curiosity to Mars and then transmitted back to Earth, the message, lasting just over a minute, represents the first broadcast of a human voice from another planet. While primarily of PR value, the broadcast demonstrated the capabilities available with the rover working with (in particular) the Mars Reconnaissance Orbiter (MRO) when transferring large amounts of data to Earth; the speech represented some 4 megabits of voice data, which was transmitted alongside other information. As it is, in just three weeks, Curiosity has returned more data to Earth than the entire Pathfinder and MER rover missions combined.

SAM, the Sample Analysis at Mars, is a suite of instruments designed to analyse organics and gases from both atmospheric and solid samples. On Saturday August 25th SAM was allowed to take its first sample of the Martian air, albeit as an engineering calibration exercise rather than a science experiment. After a slight “blip” in the proceedings when traces of calibration gas which should have been evacuated from the system beforehand were measured rather than Martian air, the tests successfully confirmed SAM’s atmospheric sampling capabilities are ready for action. In the future SAM will not only be able to sniff the air (and “taste” samples of Martian rock and soil delivered to it by the robot arm), it should even be able to tell us what Mars smells like (which, given it is thought Gale Crater has levels of sulphur dioxide present, is liable to be, “Ewww! Rotten eggs!”).

The two Mastcam cameras (M100 (telephoto) and M34 (wide-angle)) have almost completed their characterisation check-outs and the Malin Space Science Systems team is getting ready to turn them over to the MSL science team for the start of science operations. Key to this work has been ensuring the cameras are properly focused, a process that has required using the both camera lenses to take high-resolution images across a range of distances. This has resulted in some amazing mosaics of Gale Crater being produced.

In the above image, Mastcam reveals Gale Crater: the grit-like surface on which the rover sits extends outwards to the South-west for about 125m (406ft), and is followed by a slight dip in the land that extends a further 105m (341ft) from the rover to the lip of a small crater about 20m (65ft) across. Beyond the rim of the crater can be seen what is described as a low-lying “moat” surrounding the flanks of “Mount Sharp”, the middle of which is about 3.7km (2.3 miles) from the rover. Beyond this is a field of sand dunes some 5.5km (3.4 miles) distant, with the base slopes of the mound just beyond them. The regions the science team are particularly interested in extend from about 6.6km (4 miles) from the rover out to about 10.7km (6.7 miles). 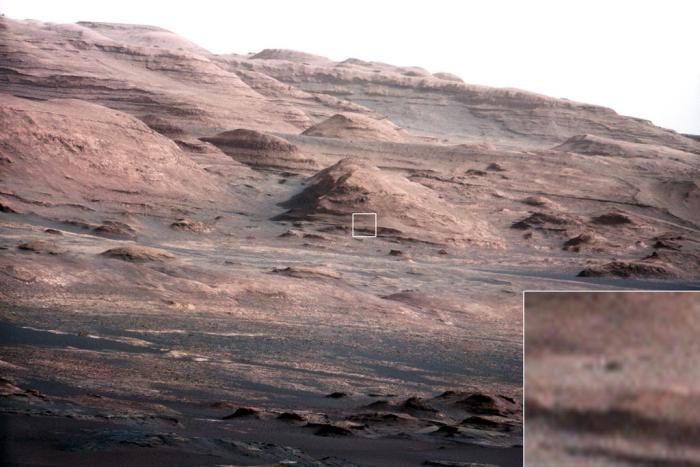 The image above shows a zoomed-in view of the region of interest, with the dune field in the immediate foreground. The inset image is of a rock roughly the size of Curiosity (the black dot in the inset image), pictured to hep give a sense of scale to the mesas, and show what the rover might look like if it could be pictured from Bradbury Landing once it starts exploring “Mount Sharp”.

While the area of interest is only 10km (6 miles) from Bradbury Landing, it would take Curiosity 100 days to reach it, were it to drive at full speed – which is obviously not what is going to happen, as there is much to study along the way.

On August 27th, NASA released a panoramic movie of Gale Crater and “Mount Sharp” put together using images from the Mastcam captured on the 8th and 18th August (prior to the focus calibrations being completed). The images have been white-balanced to match sunlight levels on earth, with 640×360 and 1280×720 Quick Time version of the movie available on the JPL website (note the 1280 movie is over 242Mb in size and may take time to download and stream).

Using Mastcam, the MSL science team have begun trying to characterise “Mount Sharp’s” possible formation – and the images have already given rising to intrigue, revealing a sharp “unconformity” in the slopes of the mound.

This unconformity is shown in the above image by a line of white dots. The lower reaches of “Mount Sharp”, below the white dots, are composed of relatively flat-lying strata that bear hydrated minerals. The strata above the white dots are sharply inclined, and data from orbit and the rover indicate that they do not contain hydrated minerals. Both the differences in composition of the strata and the inclination of the upper layers indicates what mission scientist John Grotzinger calls a “profound change” in the ways in which the two sets of strata were formed. The flat / inclined nature of the two is almost exactly the reverse of similar layering seen on Earth (such as in the Grand Canyon), where the strata above such an uncomformity are generally flat, and those below often subject to being inclined.

Curiosity has been on the move some more, manoeuvring itself around Bradbury Landing ready to examine one of the scour marks blasted by the Descent Stage’s motors in greater detail using Mastcam, DAN (Dynamic Albedo of Neutrons, a suite of instruments designed to determine the amount of hydrogen – an indicator of water – trapped in the Martian soil) and ChemCam, the laser and imaging system.  During the NASA JPL conference, the team showed new images showing some of these most recent movements.

Just a Couple of Days

Over the next two days, Curiosity will study the scour mark in detail, and time will be taken in characterising the stereo 3D capabilities of the Mastcam. One of the hoped-for results of the latter is that they will give engineers an idea of the degree of incline in the various slopes on and around “Mount Sharp” – information that will help when planning future drives to the mound.

After this, the rover is likely to be instructed to start the first leg of the journey to Glenelg. This will take place over a number of days and should see the rover traverse about 100 metres (300ft), moving it clear of Bradbury Landing and away from any potential contamination of the soil by the Descent Stage engines. The science team will then start looking for a suitable area to test the robot arm’s scoop mechanism, although it may be some time before a suitable location is found.

Curiosity reports in this blog