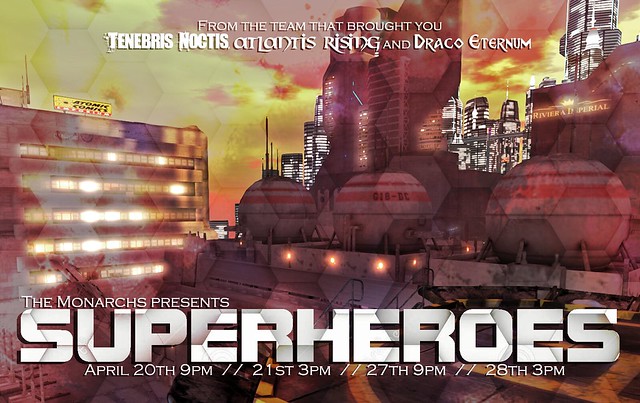 There’s big productions, and then there’s really really big productions. Monarchs puts together a few shows a year that are really big, people line up for hours to get into the sim early, and their upcoming Superheroes show is shaping up to be another feast for all senses.

Is it a bird? Is it a plane? NO!
It’s dates and times for The Monarchs’ upcoming sim-wide production of SUPERHEROES.

Join us on a mad dash into the world of ultimate good and evil where superheroes always prevail – even if it means destroying a vehicle, a building, a city…or two.

That’s the TL;DR, but I want to know more. Who are the Monarchs? What makes them different from the other dance groups out there? What does it take to put together one of their productions?

I sent Diiar Von Shippe a list of questions. She’s one of the leaders of Monarchs. Despite all the craziness of putting together costumes and sets and dance acts and coordinating all of the performers, she still had the time to answer them for me. 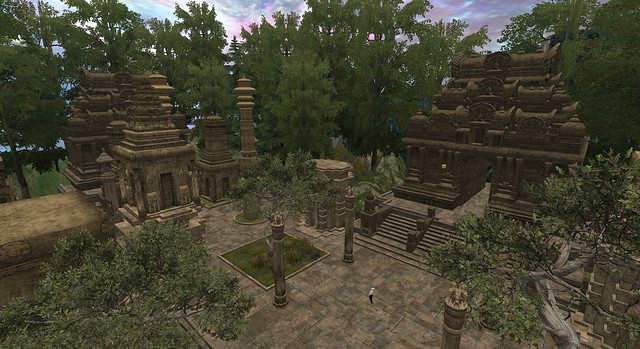 I’d be lying. This was me being lazy and not really having a true conversation, so why try to hide it, right? I sent her a list of questions, and she answered them beautifully. My faux-journalist heart wept.

Still she was nice enough to answer these, and I’m very grateful for that, and I hope this gives you some insight into the journey Diiar has taken in Second Life and Dance Performance. (As opposed to the road to burnout and misery I’ve been crawling down. Anybody have a bottle of something?)

Besides, her answers were just so… beautiful, I couldn’t bring myself to edit this down and chop it up. (Okay, I’m lying again. I’m lazy.)

Questions in bold, comments in italics, and she’s in plain text.

Tell me about yourself, Diiar.

My name is Diiar Vader Shippe, I am co-owner of The Monarchs dance troupe along with Royal Shippe. I’m also a manager, choreographer, dancer, poster-maker, story-writer, alleged slave driver, part-time workaholic, epic rant writer and much more – though none of that is as interesting as this.

I spend my days nagging at people (mostly Royal), sneaking out to listen to some of SL’s live singers perform – a fairly (re)newed interest of mine – or attending to this distracting little thing called Real Life.

(This is where I’d raise an eyebrow at slave-driver and count the number of exits available to me. Because the last thing I want to do is end up enslaved to a dance performance group and doing their bidding, right?)

How did you get your start in Second Life?

I had to take a class at college some 5-ish years ago where we, at one point, discussed on-line communities. Naturally Second Life came up. Now, my teacher made it sound like a dripping hub of malcontent, pervy freaks – so naturally I had to make an account and go check it out…

I was surprised to find that in between all the specimens that proved my teacher’s case were some real characters and some interesting souls and so…I stuck around.

(Please do not undersell the malcontents and pervy freaks. We have our time to shine, too.)

What got you into dance in Second Life?

After about 6 months of general depravity,

I found myself at a dance show at Ellie’s. It was much like the ones you find weekly across the grid these days. Smaller perhaps than most – it never seemed like a long show and I think more burlesque-y for sure than Monarchs is. And I remember they had a great host – I forgot her name, but I’m sure people that went there will remember her. I always thought she had a great style and I took a lot from that when I started hosting a show myself a bit later on.

But I saw absolutely no appeal in it. On the other hand, my company did, and before long I was suckered into their plans to open a theatre of their own.

That’s where I started – as a hostess. Before long though I had the urge to try my own hand at creating a performance and though I didn’t know how to build (like at all), I had my, embarrassing, début back in 2013. It wasn’t until my 3rd set I finally thought I was onto something and from that point, it’s been a slow, but steady journey to where I am today.

(I’ve noticed that a lot of people have mentioned Ellie’s. I should probably hunt her down and find out what the history is there. After a vacation, I think.)

And then came Monarchs, right?

We have to go about 3 years up in time before Monarchs starts taking shape. And then you have to add Royal Shippe and Myth Raven – my better and worse half in SL respectively, hah!

(For the record, I am my own worse half. Which makes for one and a half me. Maybe I need to redo the math.)

For the longest time, we were joking about how nice it would be having our own troupe where we could set the agenda and where we could do things the way we thought they ought to be done. Now, before I go on, I want to make it clear that we didn’t (and still don’t) think our way is the one and only right way, and in many things, we’re still trying to find a way that makes sense. Personally, I think as long as you have something unique to offer there’s room for a new perspective. We wanted a troupe that focused heavily on quality over quantity, and one where you could never be quite sure what you’d be getting, other than a spectacle and a performance.

Just before our début show Myth had to poof to RL and with that we also took a step away from solo dances and the naughtier stuff – which quite naturally gave way to the size shows you see us doing today.

It’s quite a way from joking about it to actually doing it, and I’ve forgotten what the deciding factor was in the end. In any case, Monarchs was born in the spring of 2016. And in the time since then, we’ve gathered together a small but fun group of people that can carry the ambition and continuously put up with our unreasonable antics. And a growing fan base of what I personally believe to be among the most patient people in all of SL, waiting months in silence for us to finish anything new for them.

(On top of that, we’re also the most patient because we get to the sim hours in advance and wait because it always fills up quickly. So, I’m a total idiot for doing this article because now you know they exist and you’ll be fighting for those few seats, too. Remember what Blaze said about being very sad if you miss Cirque? Well, you’ll be sad if you miss Monarchs, too.)