“Another world is colliding with this one,” said the toad. “All the monsters are coming back.”

“There’s no one to stop them.”

There was silence for a moment.

Then Tiffany said, “There’s me.”

Armed only with a frying pan and her common sense, Tiffany Aching, a young witch-to-be, is all that stands between the monsters of Fairyland and the warm, green Chalk country that is her home. Forced into Fairyland to seek her kidnapped brother, Tiffany allies herself with the Chalk’s local Nac Mac Feegle – aka the Wee Free Men – a clan of sheep-stealing, sword-wielding, six-inch-high blue men who are as fierce as they are funny. Together they battle through an eerie and ever-shifting landscape, fighting brutal flying fairies, dream-spinning dromes, and grimhounds – black dogs with eyes of fire and teeth of razors – before ultimately confronting the Queen of the Elves, absolute ruler of a world in which reality intertwines with nightmare. And in the final showdown, Tiffany must face her cruel power alone…

In a riveting narrative that is equal parts suspense and humour, Carnegie Medalist Terry Pratchett returns to his internationally popular Discworld with a breathtaking tale certain to leave fans, new and old, enthralled. 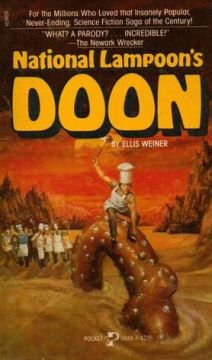 In a distant galaxy, far, far away, a plot is brewing as vast and elaborate as the Empire itself…

Evil powers plot to harvest the wild pools of beer that grow only on the savage, sugar-swept world of Doon, take control of the native pretzel population, and turn the plucky little orb into the lounge-planet of the universe!

And only one man, Pall Agamemnides, heir to a dukedom can stop the galaxy-wide web of conspiracy and intrigue that is being fomented, and bring an end to the threat facing Soon.

Although reliant on a knowledge of both Frank Herbert’s sprawling story of Dune and Herbert’s often heady and flowery prose, Ellis Weiner’s tongue-in-cheek Doon is a masterpiece, offering a perfect parody of Herbert’s novel and brilliantly and accurately mimicking his prose. 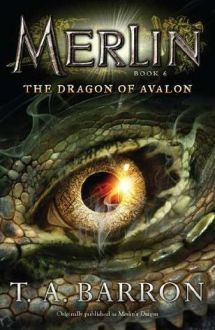 Long ago, at the dawn of Merlin’s world, a strange little creature named Basil appeared. Part lizard, part bat, his eyes glow with a mysterious light.

When Basil discovers a threat to his world and to Merlin, he begins an epic journey that takes him from the Great Tree of Avalon to the outermost edges of the spirit realm. But his boldest journey will be to face his own deepest fears. And only if he survives can he save Merlin – and find his future.

So reads the cover description for The Dragon of Avalon, part of T.A. Barron’s Merlin Saga series, a trilogy of stories within the series charting Basil’s rise from humble beginnings to the greatest dragon of all time, loyal to Merlin and protector of Avalon.

Join Faerie Maven-Pralou as she delves in Barron’s magical realm.

On Monday, April 16th, 2018, after being delayed from a planned December 2017 lift-off, the launch window opens for NASA’s Transiting Exoplanet Survey Satellite (TESS).

As its name implies, TESS is designed to seek out exoplanets using the transit method of observation – looking for dips in the brightness of stars which might indicate the passage of an orbiting planet between the star and the telescope. Once in its assigned orbit and operational, TESS will work alongside the Kepler space observatory – now sadly nearing the end of its operational life and eventually the James Webb Space Telescope – in seeking worlds beyond our own solar system.

Roughly the size of an upright ridge/freezer combination, the 356 kg (800 lb) TESS is due to be launched on its way atop a SpaceX Falcon 9 booster from Launch Complex 40 at Canaveral Air Force Station, Florida, on April 16th, 2018, in a launch window that opens at 18:32  EDT (22:32 UT).  The rocket – sans it’s payload – underwent a static rocket motor test on Wednesday, April 9th, prior to it being returned to the launch preparation facility, where the Payload system and fairings containing TESS were mated to it in readiness for the launch. As well as launching TESS, SpaceX plan to recover the Falcon 9’s first stage.

Once on its way, Tess will take 60 days to reach its unique orbit, a “2:1 lunar resonant orbit“, which will allow the craft to remain balanced within the gravitational effects of the Moon and Earth, thus providing a stable orbital regime which should last for decades. In addition, the orbit means that TESS will be able to survey both the northern and southern hemispheres.

During this initial 60-period, scientists and engineers will spend the first week re-establishing contact with TESS and confirming its operational status as its instruments are cameras are powered-up. The instruments will then go through an extended commissioning and calibration phase, as engineers monitor the satellite’s trajectory and performance. After that, TESS will begin to collect and downlink images of the sky.

While Kepler has so far found the most exoplanets in our galaxy, it has done so by surveying relatively small arcs of the space visible to it. TESS, however, will do things differently. It will scan the galaxy in hundreds of light-years in all directions, a sphere of space containing some 20 million stars, paying particular attention to the brightest stars around us in the hope of detecting planetary bodies in orbiting them.

This will be achieved by dividing space into 26 individual “tiles”, allowing the four imaging systems on the craft to repeatedly observe a “strip” of four tiles at a time for a minimum of 27 days each (and parts of some for up to a year at a time) before moving to the next strip, working its way around the sky. In this way, it is estimated TESS will be able to survey up to 200,000 stars in both the northern and southern hemispheres over multiple years.

Amid this extrasolar bounty, the TESS science team aims to measure the masses of at least 50 small planets whose radii are less than four times that of Earth. Many of TESS’s planets should be close enough to our own that, once they are identified by TESS, scientists can zoom in on them using other telescopes, to detect atmospheres, characterize atmospheric conditions, and even look for signs of habitability.

In this latter regard, TESS will pave the way for detailed studies of candidate exoplanets by the James Webb Space Telescope (JWST), now scheduled for launch in 2020. While TESS cannot look for atmospheric or other signs of life on the distant worlds it locates, JWST will be able to do just that. So, even as we prepare to say a sad goodbye to Kepler, the hunt of exoplanets is actually just hotting up.

END_OF_DOCUMENT_TOKEN_TO_BE_REPLACED

On Thursday, April 19th, Fantasy Faire will open for 2018, and run through until Sunday, April 29th. Through the event, there will be a lot to see and do – as there always is at Fantasy Faire – including the fourth annual Literary Festival (LitFest).

Lying deep within the Fairelands lies the home of the LitFest, a special place where the magic of the spoken word will weave tales of wonder, relate stories of great adventure and daring; where talks by authors, discussions, creative writing sessions and performances will all take place. For 2018, the event is headlined by two fantasy authors, both of whom hail from the UK:

Both will be in conversation with David Abbott.

In addition, there will be stories and discussions with a host of writers who have particular relationships with Second Life. This year the festival will again be emphasising creation, as a number of the leaders of creative writing groups in Second Life bring their regular events to the Faire, and welcome newcomers who want to join in with such events.

There will also be a special daily story and poetry writing challenge. Every day, those at the festival will be invited to put their Fantasy Faire experience into words.  The Faire is brimming with stories: breathtaking builds and fantastical creations designed to touch your heart and soul.  What stories do they inspire in you?

Details of all the LitFest events will be posted in the LitFest schedule in the next few days.

Singing A Song of Ice And Fire

Each LitFest features the works of a particular author. In 2015, it was Terry Pratchett, who sadly passed away just before the event. In 2016, and to mark the 400th anniversary of his death, the LitFest featured William Shakespeare. In 2017, the LitFest honoured the life and works of John Ronald Reuel Tolkien.

For 2018, the life and works of novelist and short-story George Raymond Richard Martin, the power behind A Song of Ice and Fire, also known as Game of Thrones. Martin’s work will be celebrated on Wednesday, April 25th, 2018 with a series of events.

The popular Fantasy Faire LitFest Tours will once again be taking place, leaving daily from the LitFest home base on Halls of Story to explore the Fairelands and seeking the stories they have to tell as well as their special secret places and details. Each tour will be guided and accompanied by music, as some of the Faire’s best loved DJs offer selections of music, especially chosen for each of the regions visited.

The Tours for 2018 will be as follows (all commence at 17:00 SLT unless otherwise indicated):