First held in 2010, Mole Day honours the members of the Linden Department of Public Works (LDPW), affectionately known as the “moles”, who are responsible for the construction of the Mainland infrastructure in Second Life – the roads, railways, waterways, and so on. 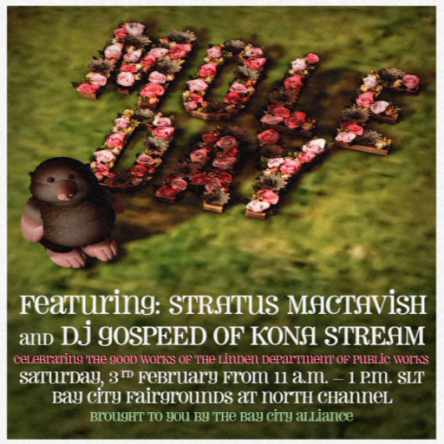 “Moles” are resident builders, scripters and others who create new content on Linden Lab’s behalf and to the benefit of all. These Residents all have Second Life accounts with the last name “Mole”, and work under the auspices of the Linden Department of Public Works (LDPW).

The Moles have been responsible for some of the larger mainland development projects, such as creating many of the more famous sights in Nautilus and wells as undertaking initial development of Zindra, the Adult continent.

More recently they have been directly involved in projects such as Horizons, the Horizons Experience and PaleoQuest. The Moles also develop Linden Homes regions on behalf of the Lab, including all of the parks and places to discover within them.

However, their very first project was developing Bay City itself – hence the City’s annual celebration honouring them. Normally held on the same day as Groundhog Day in the United States, the event this year will again take place at the Bay City Fairgrounds February 3rd commencing at 11:00 SLT. The event will feature DJ GoSpeed Racer of KONA stream followed by Stratus Mactavish performing live at 12:00 noon SLT.