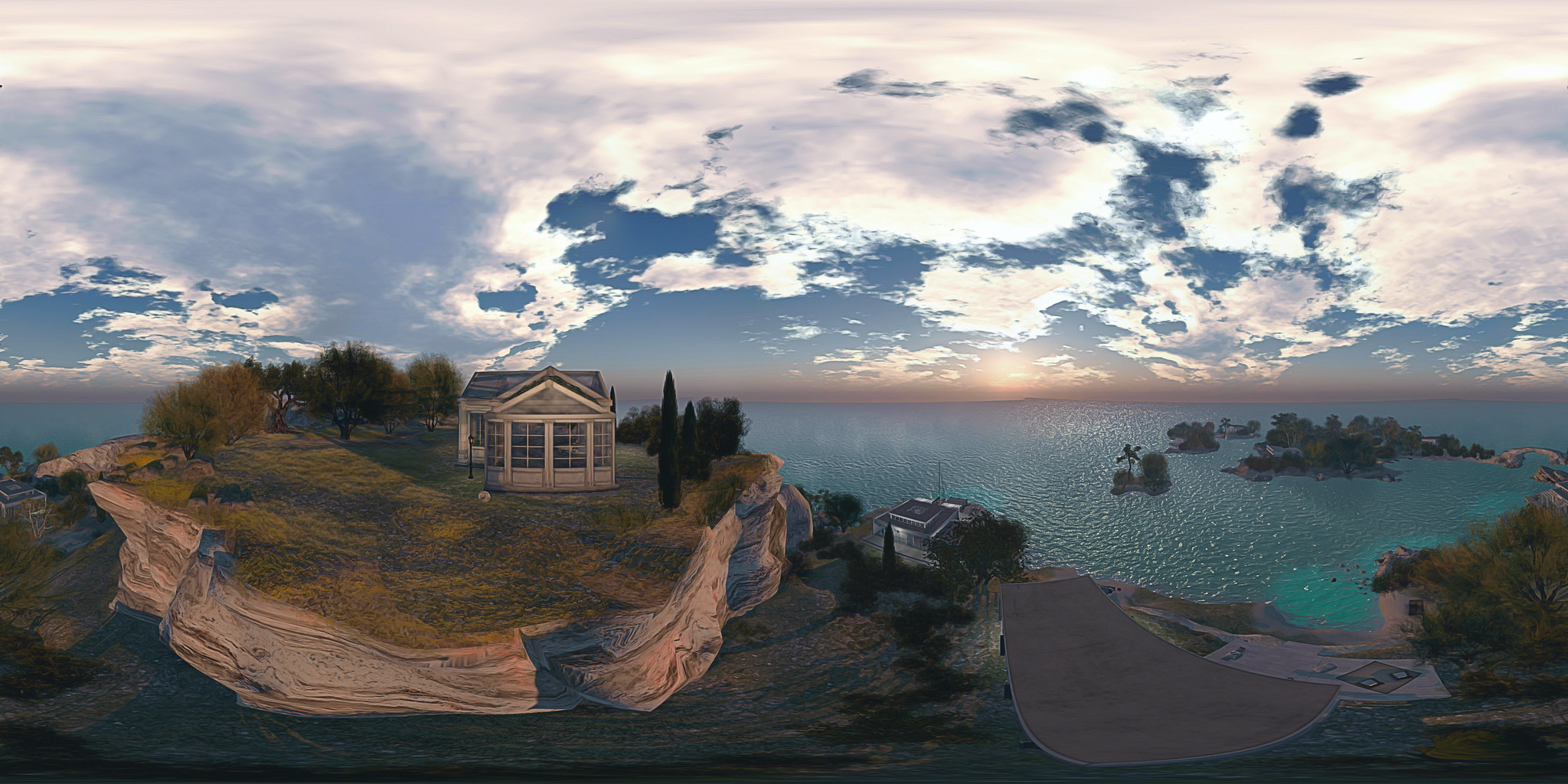 The summer wind, came blowin’ in from across the sea
It lingered there to touch your hair and walk with me
All summer long we sang a song and then we strolled that golden sand
Two sweethearts and the summer wind.

So open the lyrics to Summer Wind, Johnny Mercer’s 1965 re-working of the lyrics from German Der Sommerwind by Hans Bradtke (music by Heinz Meier). It’s a song perhaps most associated with Frank Sinatra, and I mention them because the song popped into my head as Caitlyn and I explored the sister regions of Summers Wind and Winters Wind – and the more I thought about it, the more appropriate the song seemed to fit the regions.

Both of these regions – a full sim and a homestead respectively – have been designed by Mexi Lane, of MIC- Imagin@rium art region fame, together with mesh specialists. MIC- Imagin@rium may have passed into history, but the influences of Mexi’s Greco-Roman design there are clearly evidenced in Summer Wind, which offers a mix of public, residential and commercial facilities in what can only be described as a stunning landscape, beautifully and imaginatively put together to present a location which is quite unique among Second Life regions.

The landing point is located towards the centre of the region, nestled between the vertical shoulders of huge, grass-topped mesas, the ground feeling like narrow canyons running between them. A well is close to hand, as is a bicycle rack for those who fancy riding through the region – although using your pedal extremities for walking is by far the best way to find your way around; bikes and stairs often don’t mix!

Those familiar with MIC- Imagin@rium will immediately feel a sense of familiarity here: the windlight offers a similar just-before-dusk setting Sun, the rocks and vegetation all have a faintly familiar feel, while a quick glance down along the canyons will reveal hints of Greco-Roman architecture marking the fronts of commercial premises hewn out of the huge bulk of the mesas. For a more direct homage, see the name of the conference centre sitting atop one of the mesas.

Close to the landing point is the entrance to the Peperonico Club: a narrow tunnel mouth which gives little away as to what lay within; the rocks of the mesa have been beautifully custom-made to surround the steampunk factory by Hattie Panacek (Hatris Panacek), its interior made into a very cosy club in which Caitlyn and I felt completely at home, thanks to the roaring fireplace on the upper mezzanine, and the ample use of the Union flag in the design :).

Tunnels, steps and paths are the secret to finding your way around Summers Wind. Ground level paths wind between the tall cliffs and eventually to the low-lying coastal areas with shingle beaches, grassy paths and rich foliage. Private residences occupy the western curve of the region, facing out to sea and screened from the public paths by trees and bushes. To the east, at the foot of the cliffs lie more caves and places to relax, including a waterfall-fed spa in a broad cavern.

More residences lie to the north – so take care to avoid encroaching on privacy there as well, where a stone bridge leading to Winters Wind can be found. This forms a spur of land curving northwards to cup the waters of a bay, with smaller islands sitting just off of it. Houses and cabins are scattered among the tress and on the sands, when a single footpath through the middle and the arc of a beach offering the only public areas here.

The beauty of Summer Wind lies in the almost entirely custom nature of the landscape: the cliffs and mesas, with their steps and arches, tunnels and grassy footpaths, have been specifically designed to fit the region. The result is a place that is both unique to Second Life, yet delightfully Mediterranean in look and feel; a place which might be found on a remote part of the Spanish or Italian coast, or equally somewhere on the Aegean coastal regions.  The design means there is plenty to see, so if you tire of walking, keep an eye out for the teleport network of urns lying half-buried in the ground to whisk you around.

And the link to Mercer’s song? Well, that comes not only from the strong Italian flavour in the design of Summers Wind and Winters Wind, but also because the original Der Sommerwind was a song about the changing seasons, using the Sirocco wind of the Mediterranean as a metaphor; so using the song as a metaphor for the beauty of these regions seems entirely appropriate.

The following notes and audio were taken from the weekly Bento User Group meeting, held on Thursday, October 20th at 13:00 SLT at the the Hippotropolis Campfire Circle. and chaired by Vir Linden. For details on the meeting agenda, please refer to the Bento User Group wiki page.

Note that this update is not intended to offer a full transcript of the meeting, nor does it present the discussion points in chronological order. Rather, it represents the core points of discussion, grouped together by subject matter were relevant / possible, whilst maintaining the overall context of the meeting.

The 4th iteration of the Bento RC viewer appeared on Thursday, October 20th, ahead of the meeting. Version 5.0.0.320815 is primarily an update to keep the viewer on a par with the release viewer code (VLC Media plug-in for Windows), although it does include a rendering bug fix.

The fix including in the new RC version is for some existing Haste Coy assets, which were  reported on BUG-40672 (the deformed werewolf issue noted in my previous Bento update).

There has been no decision on what to do about the werewolf deformation issue itself (the result of a change in viewer behaviour – see my previous update, linked to above). It’s not clear how widespread this issue is – at the moment it appears to be somewhat limited. The problem here is whether the viewer behaviour is maintained for Bento or rolled back to how it was, it will mean some content will have to be re-worked and re-uploaded. Thus, a deciding factor for the Lab in determining what to do will be discovering exactly how much existing content is actually impacted.

The focus is now on bug fixing with the viewer. There is no date being considered for promoting Bento to release status; as previously indications, this will depend on bugs and fixes, the viewer’s crash rate, and the relative priority it has when compared with other viewers in the release channel (there being only one at the time from writing).

A bug was reported just prior to the previous Bento meeting about an issue with the new scale locking capability. This allows creators to disable shape sliders from having any influence over joint positions when uploading their models. However, it had been reported as working intermittently,  Vir has developed a fix for this issue, but it will not be available until the next RC update for the viewer.

BUG-40725 reports that checking the Skin Weights option when previewing joint positions will crash the viewer (Bento RC 5.0.0.320160). This has yet to be investigated.  This is actually one of two places where skin weights can be checked, the other being in the upload option, so the preview doesn’t have to be used. However, the Lab will be looking into the issue.

There was some confusion as to whether feet on models could be resized or not using the sliders. It appears that they can, providing the model is rigged to the L_FOOT and R_FOOT collision volumes for the feet.

Cathy Foil reports that MayaStar has been updated completely to Bento. Those using it should rez their update Checker to get the latest version. Report are that it handles sliders really well. This represents the culmination of several long months of work for Cathy in updating her product to be fully Bento compliant – congratulations to her!