It’s that time of year when ghosts and ghouls arise, when demons and vampires and more walk abroad; it’s a time for spooky stories and terrifying tales to be told by moonlight or in darkened rooms. And if you’re someone who enjoys spine-tingling yarns, we have just the thing for you at Holly Kai Park – The Great Boo!

Join us on Sunday, October 30th from 1:00pm SLT, as Seanchai Library presents an afternoon of Halloween stories live in voice to mark the opening of Holly Kai Park’s Storyteller’s Circle.

Our demonic deliverers of twisted tales and devilish dialogue will be:

The circle has been specially dressed for the occasion – the camp fire is lit, the torches blaze brightly to ward off the spirits. But the mist roils and rolls, the wolves howl and owls hoot, and great cobwebs fill the gaps between the trees as the spirits walk abroad! Just set your viewer to midnight (or let Firestorm set the atmosphere for you!), and step into our ghostly world!

The gates will be open throughout the afternoon – so feel free to join us as time permits – although we hope you’ll be with us throughout! after all, what could be a better complement to your Spooky Sunday plans?

And if you feel like coming in costume, there are spaces aplenty for ghouls, ghosts, monsters, demons and all, oh my! 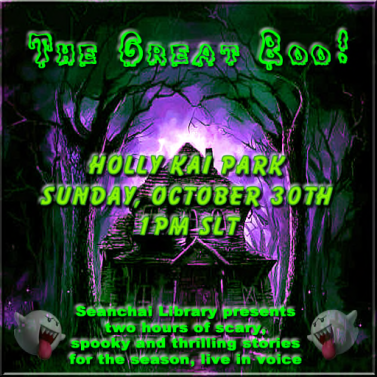 It’s that time of year when ghosts and ghouls arise, when demons and vampires and more walk abroad; it’s a time for spooky stories and terrifying tales to be told by moonlight or in darkened rooms. And if you’re someone who enjoys spine-tingling yarns, Seanchai Library has just the thing for you at Holly Kai Park – The Great Boo! – an afternoon of Halloween stories live in voice to mark the opening of Holly Kai Park’s Storyteller’s Circle. 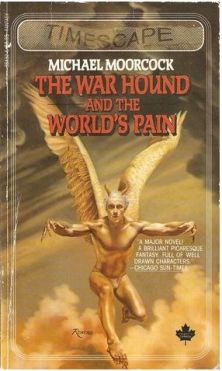 Europe, the 17th century: nations are ravaged by the Thirty Years’ War, driven by religion and engulfing most of the Great Powers. Weary of the fighting, disillusioned, faithless and cynical, Ulrich von Bek, the War Hound, deserts his troops and travels through a Germany ruined by the war and religious persecution.

Coming to a strange forest, he finds within it a castle which appears to have escaped the war. He decides to seek shelter within its walls – only to find this is no ordinary castle. The lord within it is none other than Satan himself.

Von Bek discovers he has been allowed into the castle so that Satan might seek his help. In return for his soul, the Devil asks him to seek out the Cure for the World’s Pain, so that Satan might use it as proof to God that he wishes to be reconciled with heaven.

The hosts of Hell, however, aren’t that keen on the idea of reconciliation…

A Halloween special with Shandon Loring

With Trolley Trollop and Caledonia Skytower. 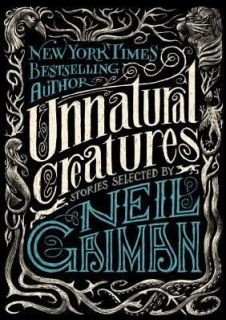 Unnatural Creatures is a collection of short stories about the fantastical things that exist only in our minds—collected and introduced by beloved New York Times bestselling author Neil Gaiman.

The sixteen stories gathered by Gaiman, winner of the Hugo and Nebula Awards, range from the whimsical to the terrifying. The magical creatures range from werewolves to sunbirds to beings never before classified. E. Nesbit, Diana Wynne Jones, Gahan Wilson, and other literary luminaries contribute to the anthology.

Join Shandon Loring as he brings some of these stories to life.

The featured charity for September-October is Alex’s Lemonade Stand Foundation (ALSF), a childhood cancer foundation dedicated to raising funds for research into new treatments and cures for all children battling cancer.