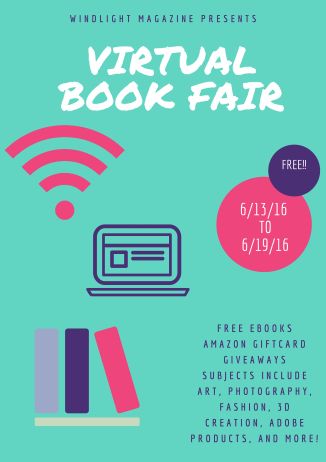 One of the main goals of Windlight Magazine is to provide free and/or low-cost training and resources to our readers in the areas of the arts. To further this goal, we have created a virtual book fair, where you can obtain free e-books* on the following subjects: art, photography, Adobe products, GIMP, Blender, 3D creation, fashion, fiction, non-fiction, and more!

The fair will take place entirely outside of Second Life, and made available through the following mediums:

Each day of the fair will focus on a specific theme:

To participate in the fair, you must register your interest. There is no requirement be on-line all day when attending; you can simply log on and view the provided links from your preferred attendance medium. After you’ve registered you’ll be sent a note card in-world with information on how to access the fair through your preferred medium.

*Note that due to copyright restrictions not all of the selected titles may be available in your country of residence.

The 38th video of The Drax Files World Makers arrived on Wednesday, June 8th, focusing on fashion designer Eboni Khan, who has been designing women’s apparel for the last decade, marketing it through her Hucci brand. However, this segment isn’t simply another examination of the creative and income generation opportunities offered by Second Life. While Eboni’s experience is very much central to the video, there is a lot packed into the three-and-a-half-minute running time, which makes this another fascinating piece.

As we learn in the video, Eboni’s ability to use Second Life as a viable means of income generation wasn’t entirely a conscious decision; trained in information management and employed as an IT manager, Eboni’s world was turned upside down when she was laid off. Second Life offered her the means to work for herself and earn an income which would enable her to raise her son (now in his 20s and attending college) – all through the power of her own creativity and that of the micro transaction.

Entering into a virtual business from a physical world business background provides Eboni with a keen awareness of the real power of virtual environments – as spearheaded by Second Life – which is worth considering when looking at things like Project Sansar and understanding where the Lab is coming from with that platform.

“Second Life has such a low barrier to market entry,” she notes early on in the video. “You don’t have that with any other kind of business; you can come in on your first day and set-up shop. It’s basically the perfect proving ground for international business  – the GDP, the amount of residents – Second Life is not a game.”

Of course, setting-up shop does not guarantee anyone of automatic success. Eboni mentions some of the secrets to building a successful brand within the platform, but there is also much more that cannot be packed into 3.5 minutes. Just like real life, running a business in SL requires not just time and effort, but forethought, planning and an evolving strategy.

This is something perhaps demonstrated in 2006-2008, when business from around the world rushed into Second Life without any definitive idea of what they were trying achieve in terms of basic marketing, leave alone trying to generate any revenue. Thus, they ended up tripping over themselves and leaving, dismissing SL as a viable proposition as they went.

The fact that effort and strategy are required is also why I tend to shy away from using the term “democratising” when referring to original content creation as a business enterprise in SL. The term suggest the platform offers a level playing field for everyone, but the reality is it doesn’t; there are skills and requirements involved which, with the best will in the world, not all of us either have or can learn well enough to succeed.

But creativity also doesn’t have to be about generating revenue and income. It’s worked for Eboni and others, because this is the path they chose to take; however, it’s important to remember that Second Life is as much about fun and freedom – escapism, if you will – as it is about anything else. This is something Eboni notes in the video.

“The world will be a better place if more people had a little escapism in their life,” she correctly observes. “Because real life is hard, and your Second Life should definitely be fun.” It’s an outlook those who sit outside SL and sneer at the platform would do well to consider.

She also freely embraces the “sexier” (some  – even those who report on SL – might prefer the term “sleazier”) aspects of SL both directly and indirectly. Her designs are  unashamedly sexy, whilst her brand name is an open play on the name of a famous design brand and the fact that some dismiss SL as the home of hoochies. This approach, coupled with her views on escapism are refreshing. Second Life offers a huge freedom for people to positively express their individuality away from the constraints which might otherwise be imposed upon us in the physical world, so why not embrace it?

All told, this another fascinating and insightful piece, one which – as with every World Makers segment – but pushed into from the media. I say this not only because of what it says about Second life as a platform, but for what it reveals about virtual spaces being a genuine social environments and being both a melting pot and barrier breaking in the way they bring people together from all of the globe, from all walks of life and social backgrounds. It’s been a massively important (and oft overlooked) aspect of Second Life, and as Linden Lab and other have identified, it will be a significant part of the more immersive VR / AR / MR era we’re about to enter.

It’s’ also, I’m pleased to say, the perfect vehicle by which Drax and I have been able to re-engage in our conversations about each episode of World Makers, which tend to take place as they are being put together, or shortly before going to press with them. Catch our chat on this episode below the video.

END_OF_DOCUMENT_TOKEN_TO_BE_REPLACED

As usual, please refer to the server deployment thread for the latest information.

There have been a number of viewer updates and appearances in the various viewer channels.

The Maintenance RC viewer was updated to version 4.0.6.315924, on June 2nd. The update includes a series of additional fixes and a more descriptive set of release notes to describe the changes.   In particular, there are a new series of fixes for the recent release of the Avatar complexity / Graphics Presets viewer release, comprising:

For the full list of updates, please refer to the release notes.

Released on June 3rd, the VLC Media Plugin viewer, version 4.0.6.316087, sees the Quicktime for Windows media plugin for the playback of media types such as MP3 MPEG-4 and MOV, replaced by one based on LibVLC (https://wiki.videolan.org/LibVLC/).

Note that is change is for Windows only at present, and is due to Apple discontinuing QuickTime for Windows support, leaving vulnerabilities within it.

Currently the Mac version of the viewer is unaffected, as Apple still support QuickTime on that platform. However, it will be updated to use LibVLC in the upcoming 64-bit versions of the official viewer.

The Visual Outfits Browser (VOB) project viewer, version 4.0.6.316123 appeared on June 6th. Simply put, it allows you to use the Appearance floater to capture / upload / select images of your outfits and save them against the outfits in a new Outfit Gallery tab within the floater. See my overview of the viewer for further details.

All other viewers currently remain unchanged from week #22:

There is an update in progress for the Oculus Rift viewer, but no time frame on when that might appear. Currently, both it and the Obsolete Platform viewer are TLS 1.2 compliant (see below), so it will be interesting to see what happens with them both over the coming few weeks.

Linden Lab has issued a further reminder that as from June 15th, all Second Life users must be using a viewer and / or web browser that supports TLS 1.2 in order to make use of the Second Life WEB cashier services for L$ transactions (e.g. to send, receive, or exchange L$).

Actively maintained web browsers and viewers (official and TPV) should support TLS 1.2. However, older versions of third-party viewers and those viewers which have not been updated in recently, may not support it.  Users are therefore advised to visit https://www.howsmyssl.com/ with their browser and, if they are using an older version of a viewer, the viewer’s internal web browser, to check whether their browser / viewer supports TLS 1.2.

As has been previously noted, this isn’t an arbitrary change on the part of the Lab. It is in response to an ongoing  set of regulatory / compliance requirements (as explained by the PCI Security Standards Council) which are global in scope.