I’ve been something of a fan of the work of Lorin Tone and Madcow Cosmos for a good while now; ever since their 2011 Through the Lens of Dreams exhibit (see here) in fact. As I understand that Madcow is not quite so involved in SL nowadays as was once was the case, I was intrigued when I saw that Lorin had been awarded a region as a part of the 8th round of the LEA’s Artists In Residence programme, and wondered what might be popping-up.

MadTone is the title of the exhibit, and it opened on Sunday, February 15th. Developed by Lorin with help from partner Judi Newall, together with Kelly Shergood and Xon Halostar, it presents marvellous visual creations with carefully designed sound scapes, so be sure to have local sounds enabled when visiting!

Those who have visited previous installations by Lorin and Madcow are liable to recognise some of the pieces displayed here. There are, for example, items here from the likes of In the Belly of the Whale, the collaborative installation led by Eupalinos Ugajin and Ole Etzel in January 2014, and from Of Sound Mind from September 2012. As such, and while it is not perhaps intended in such a manner, the installation represents something of a retrospective of Lorin’s partnership with Madcow. It’s certainly a reminder of their whimsical creative genius.

Exploration is not as a straightforward as it may seem; there is no set path, and there is a lot to see on land, in the air and under the water. To make sure you get a good feel of all there is to discover, you can hop on to a dragon a short distance from the landing point, and it will take you on a flight around the region and introduce you to points of note within it, allowing you to get a good feel for the installation, ready for a more leisurely explore and play once the dragon has dropped you off (there’s a teleporter system to get you back to the ground if you hop off the dragon at one of the airborne pieces).

If you enjoy light-hearted, interactive installations with a touch of whimsy about them, I’ve little doubt you’ll find MadTone pleasing to the eye and ear. Similarly, if you’re someone who has enjoyed Lorin’s and Madcow’s work in the past, it offers a happy trip down memory lane. If you’re somewhere between the two – go visit anyway!

And when you do, keep an eye out for the talkative turtle / frog and its Shakespearian insults! 😉 .

T’other week, Berry did a meme about blogging. I debated doing it, as I’ve done her previous two meme on the same subject, then got sidetracked into other things, and by the time I thought about it, it was far too late in the week. so I thought that this week, I should make more of an effort.

This week she asks fifteen questions on the subject of “have you ever…?” in relation to our experiences in Second Life. Here are my responses:

Have you ever owned a sim in Second Life? – Yes.

Have you ever created content in Second Life? – Yes. Some of it is still available on SLM, but most of it is really dated and I should take it down, frankly.

Have you ever driven a vehicle in Second Life? – Err, umm ….

Have you ever gone sky diving in Second Life? – Yes! And the lovely Strawberry Singh once joined me (and will do again, I hope!). Once upon a time I was skydiving regularly in SL, and was part of a jump team (I still have the jump suit to prove it!). I recently pulled my old skydiving launcher and landing zone out of inventory and set both up at home so I can get back into things, and offer friends a chance to try it for themselves.

Have you ever played a sport in Second Life? – Yes, competition and formation skydiving, skeet shooting, combat shooting, car racing, golf. My friend Terag encouraged me to try air pylon racing; I’d be great at it if it wasn’t for the bit about flying around a set course between pylons…

Have you ever gone clubbing in Second Life? – Wait, what? You mean some people may not have been to a club?! Jazz places remain my favourites, although I rarely go along nowadays.

Have you ever fangirled/fanboyed someone in Second Life? – Not consciously, although there are a lot of people in SL I admire a lot. I have, however, frequently been accused of being a Linden Lab fangirl 🙂 .  It’s an accusation I can more than happily live with, because the Lab might have warts here and there (and I’ll point to them when warranted) but the fact is, without the Lab, we wouldn’t have a Second Life.

Have you ever taken a picture of your avatar in water in Second Life? – Yes. I mean it’s one of the requirements of using SL, isn’t it: 😉 . And no, you’re not seeing any, as I’m largely rubbish at taking avatar photos!

Have you ever taken a picture of a sunset in Second Life? – Many times, although things often don’t turn out as I’d hoped. However, I do have one I’m particularly proud of: 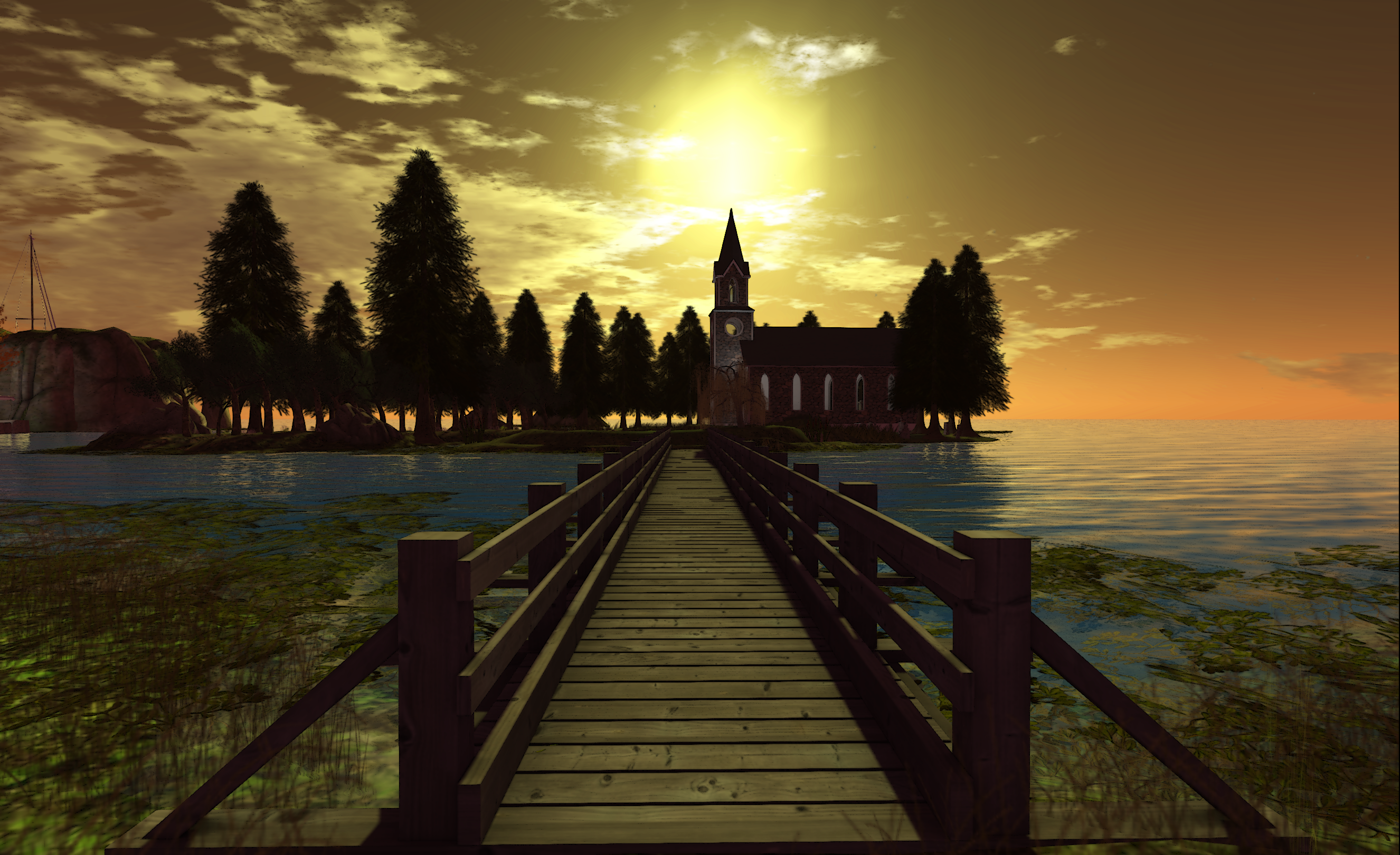 Have you ever taken a nude picture of your avatar in Second Life? – Yes, most of which are rubbish. See “swimming” above.

Have you ever dated in Second Life? – Yes.

Have you ever had or attended a wedding in Second Life? – been to quite a few, had one, presided over several.

Have you ever drank, smoked or taken drugs in Second Life? – Yes, but not saying which or when 🙂 .

Have you ever engaged in sexual activity in Second Life? – Yes.