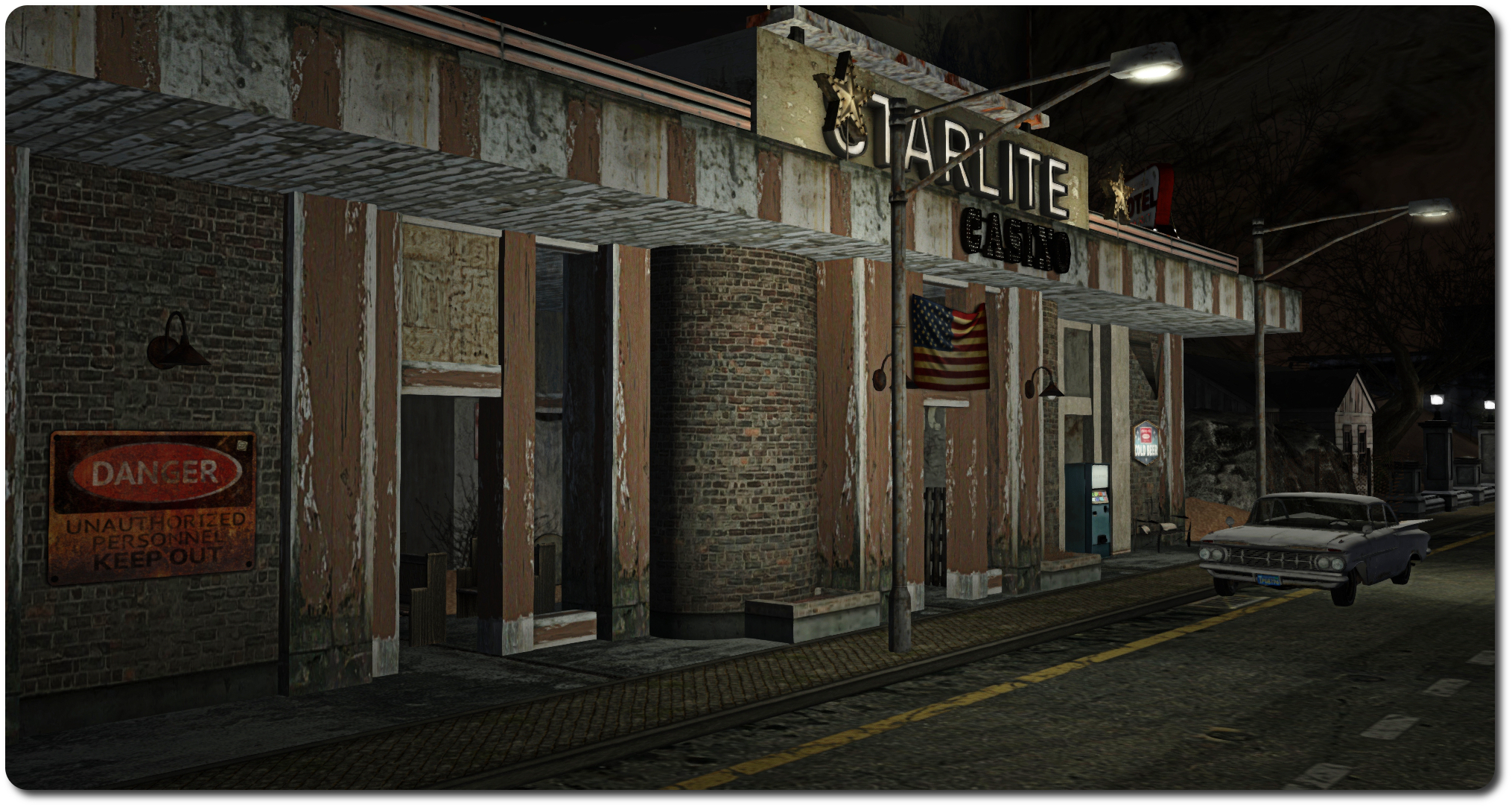 Update, February 26th: I’ve received a note saying that Square Pegs in Round Holes and Purple Crayons, Rwah’s other region (see my post on it), will be closing on March 5th, 2015.

When I last visited Square Pegs in Round Holes, the region hadn’t long been opened. As I reported at that time – September 2014 – it was largely a water-based region, with a series of islands visitors could explore. Since then, much has changed.

Rwah, the region holder has decided to offer the homestead region to those builders with a serious desire to build a region-sized installation which can be enjoyed by the public at large. To start things off, Jordy B. Zipdash was invited to create something in the region, and he came up with a darkly atmospheric build in the form of The Lost Town.

A lonely wind moans its way down a long road from a distant tunnel, passing between the careworn buildings of a run-down town. Tumble-weeds roll their way across the asphalt at the wind’s behest, while tall hills, bare rock denuded of vegetation, hem the town in, their bulk adding a sinister edge to the fading light. 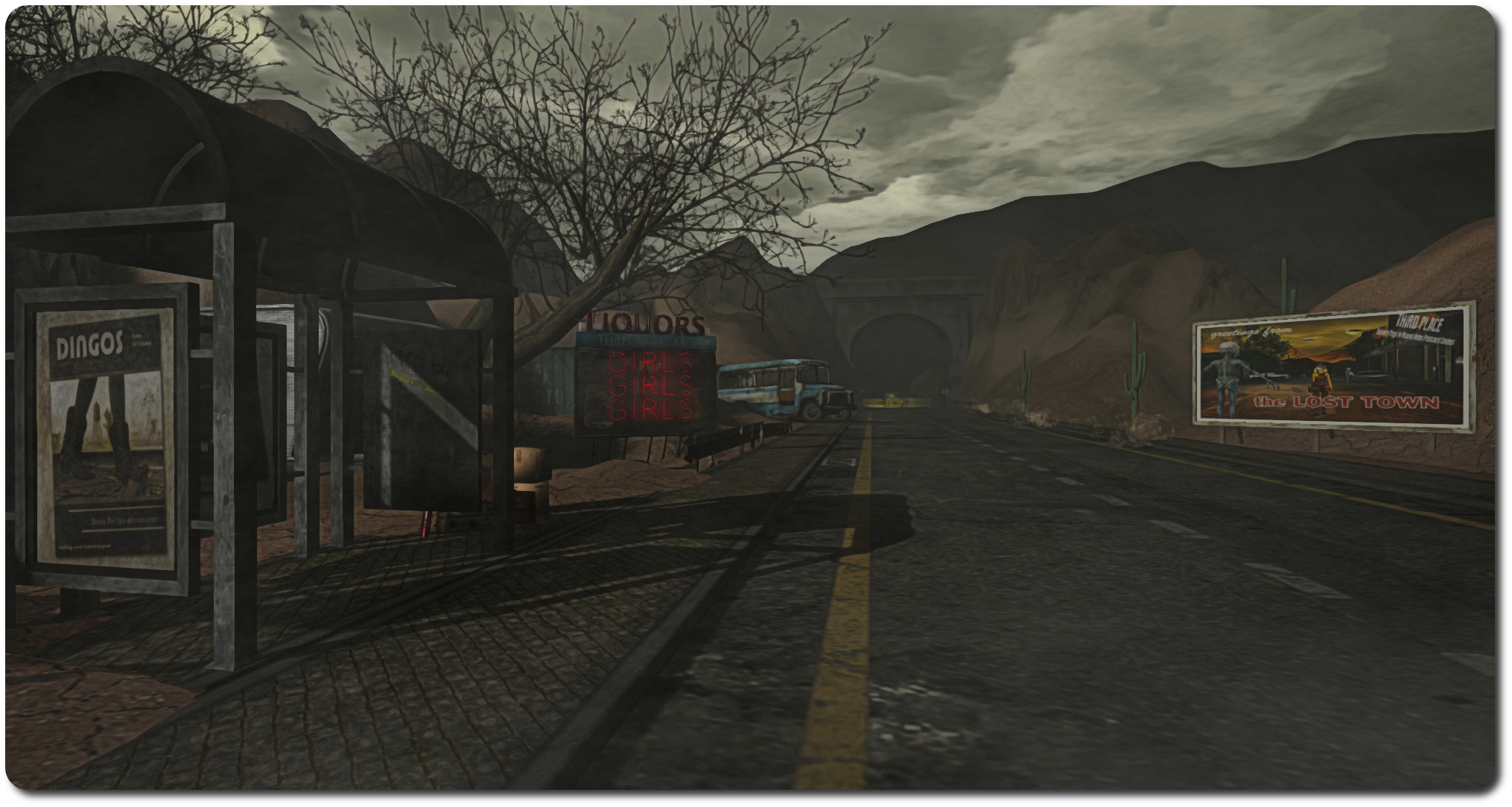 At the far end of town, the road makes a hard right turn before running arrow-straight to the mouth of another tunnel, passing a deserted trailer park and other human detritus before finally leaving this shabby corner of the world behind.

This might once have been a thriving town; there’s the imposing form of a bank on one side of the street (long-since converted to a bar), and the place even boasted a casino – the Starlite, although this has also gone through something of a transformation, becoming some kind of church; and even this seems to be well beyond any regular use, the desert sands drifting in through a back doorway and taking up residence between the pews.

But this isn’t to say the town is deserted; across the road from the shell of the old casino sits a small store and three well-maintained houses, the gleaming form of a car sitting on the driveway to one of them. Fires glow in the hearths of both places, and all have a feeling of cosy warmth about them, and by day look as if they’ve been lifted from quiet suburbia. Even so, within them, things seem a little odd; where are the occupants, given all three houses appear to have been in recent use? And why are all three bedrooms devoid of any furnishings whatsoever…? 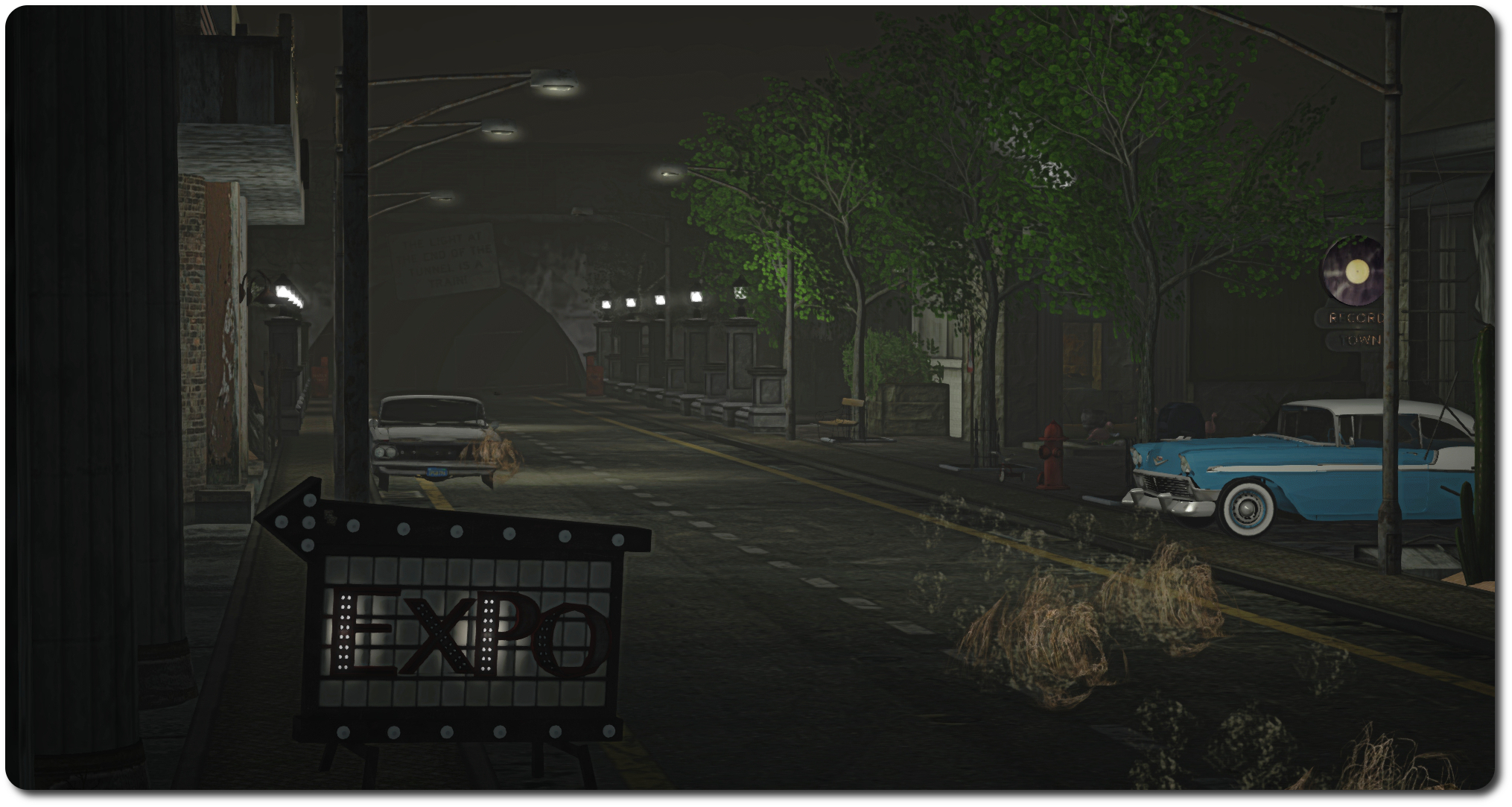 “Have you ever heard of a little mining town called Centralia?” Jordy asks by way of citing the inspiration for this installation. “If not, fire up your  search engine and read up on the place and how it came to be a little deserted town. Here in the Lost Town, the same abandonment happened.  Not by fire or elemental damage  but something far more sinister.”

Indeed, the air of mystery here, with its sinister undertones, is hard to avoid. It comes not only in the perpetual, wind-shrouded dusk that lies over the place, but also from the signs and portents hidden within some of the buildings. However, to find the whole truth, you may well have to venture out into the desert, beyond the little lake with its dilapidated barn. but be careful! “Don’t venture out too far in the desert,” Jordy warns, “Mighty strange goings-on out there, if you ask me.”

So don’t say he didn’t warn you…