Open now, and with events running through until the end of November 2014 at LEA 6, under the umbrella of the LEA / UWA Full Sim Art series is Rebirth … together, presented by the 2Lei collaborative.

Now in its fifth year, 2Lei began as a project involving artists, gallery owners, musicians, etc., with the aim of raise awareness and disseminate events related to the International Day for the Elimination of Violence Against Women, which falls on November 25th.

The installation / event is described by the organisers thus:

This year’s theme is “Rebirth… together!”. We cannot just denounce: we must dare to hope, to dream, to act, to make the dream come true and springboard for new dreams. Dreams in which men and women cooperate together to build a more just, more healthy society, in which violence does not represent the instrument upon which to convey anger, frustration, fear, and aggression.

We wish every woman’s heart beat be as strong as the drum of life. No woman will be forgotten or left behind. The “Rebirth” marks the passage of the works of artists who are exhibiting in these spaces, and the performers who will take turns on stage. The program is rich and detailed, and offers many insights. Now we want to talk about “rebirth”. A rebirth towards a world where people can live, breathe, and dream without the fear of having to defend themselves. We are reborn together in front of each painting, opera, photograph, theater or musical show that a fragment of this kaleidoscope of images, desires, dreams, passions, and every project of rebirth involves. Primarily this involves the denunciation of what is evil, of what is burning, what clip wings, and cuts short lives. Then, after the denunciation, comes the dream: the work, the strength to believe it, and to make it happen together. “TOGETHER” is the keyword of a true renaissance. And we will be the first to give testimony. Men and women who, together, believe in this project and have put in place. Thank you for sharing this journey with us.

Rebirth … together features works by artists from across Second Life and the world at large, spread across several gallery areas within the region, both at ground / water level and on floating islands overhead. All offer a mixture of 2D and 3D art, with pieces focusing on the many different ways in which violence against women can take, be it physical, emotional, mental, verbal, etc., some of which are quite striking in context and form. There are also a number of event areas scattered through the installation, which will be active through most of the remaining 10 days of the event.

The programme for these events days comprises (all times SLT):

Since 2012, 2Lei has offered events throughout the year and has participated in other SL activities with featured art exhibitions. In 2014, for example, 2Lei was represented at the SL11BCC celebrations with works by Paola Mills, and a mesh sculpture composed by Moore Tone, with creative contributions of all 2Lei committee members. Those interested in tracing the history of 2Lei may wish to visit the retrospective display area in the south-east corner of the region.

The 24th instalment of The Drax Files takes to the boards to bring us a story of the theatre, performing arts, Shakespeare, plays, stage adaptations and more, as offered to the virtual community through the remarkable folk at the Avatar Repertory Theatre (ART), the oldest and longest-running live theatre company in Second Life – and probably the metaverse as a whole, as we currently regard it today.

Storytelling has been a central part of humanity’s development since pre-historic times, and has fulfilled many role: as a means of preserving history, educating the young, providing cultural structure through mythological / religious tales, and, of course, as a source of entertainment.

As such, it’s really no surprise that theatre is an art form which we have brought with us into the virtual realms. Like the spoken word, as exemplified by the likes of the Seanchai Library, or the use of film to provide machinima and episodic series like The Blackened Mirror, live theatre is presented with many opportunities and advantages within virtual environments which are not so readily available in the physical world.

For one thing, virtual environments offer any incredibly cost-effective means of presenting a stage production. Where else, for example, can a repertory company with an interest in Shakespeare establish its own reproduction of London’s Globe Theatre in which to stage their performances? How else could they recreate scenes for a production that can completely surround and immerse the audience itself?

Then there’s the fact that the virtual medium has such a global reach, couple with a unique way of bringing people together. No longer is a company’s members or its audience constrained by geographic location, virtual reality truly makes a theatre production a world-spanning event.

These points are beautifully and engagingly made by MadameThespian Underhill, an actor / director with ART, and an actor in the physical world. Not that ART is made up entirely of professionals; another great power of the virtual is the way in which it forms a melting pot of creative talent, everyone working together equally to present a production to a live audience.

Through Madame Thespian’s eyes and words, we’re given an insight into the creative and technical complexities in bringing together a virtual world production which, as well as potentially offering greater immersive richness for the audience, present broader technical challenges for all involved – the actors, the backstage staff, the musicians, and so on. Actors, for example must bring together voice acting talents and controlled pupeetering of their avatars; gestures must be developed and tested, musicians must work to produce suitable pieces which can be pre-recorded and then added-in to productions at the required points, and so on and so forth.

The virtual realm perhaps offers one of the richest environments in which technologies such as facial expression translation, motion capture, immersive headsets and so on all have a real and far-reaching use. In short, it’s an ideal testing-ground for such capabilities, as Madame Thespian notes towards the end of the video.

More than that, taken together, live theatre and these emerging technologies offer audiences something even more unique and not so easy to be translated into the physical world – they could potentially become part of a production, fully immersed in what is happening, and even – to a degree – participating in in as extras. The Basilique Performing Arts Company, for example (the subject of the Drax Files #18), used scripted pupeetering and custom-made avatars  to make the audience of Paradise Lost an integral part of the story.

There’s also a very human dimension here as well, growing out of the freedom of expression virtual environments like Second Life give to all of us.  “I’m ageing out of most Shakespearian roles,” Madame Thespian notes. She continues:

But then again, in Second Life, I don’t have that problem, because we have these avatars that we can make look like anything we want them to be. That levels the playing field when we interact with each other. The value for older people, not only for actors, is wonderful! The ability to be able to, from your home,  interact with other people from all over the world of other ages. You are being judged by what you say … the pure essence of who you are.

And that’s a powerful thought on which to close.

If you’d like to see the Avatar Repertory Theatre live, in addition to their scheduled productions, they offer an ongoing series entitled Plays Around, a kind of “open workshop in which the company performs a ser­ies of staged read­ings, mon­o­logues, drama and im­prov­is­ation. Generally held at the company’s theatre, Plays Around takes place on Fridays at 17:00SLT, and members of the public are invited to come along and watch.

Coinciding wit the release of The Drax Files World Makers on Friday, November 21st, the ART company is hosting a special Plays Around event, Shakespeare By Request, which you can read about here. 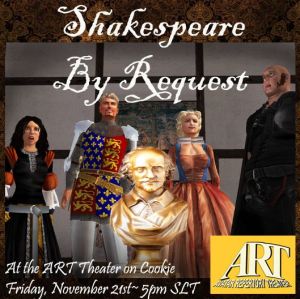 As one of the oldest theatre companies within Second Life, the Avatar Repertory Theatre (ART) operates from their theatre in Cookie, and has been at the forefront of bringing  diverse, live theatre to a widening audience through virtual performances since 2008.

Productions have included first-time realisations of works by living playwrights, through to major immersive productions such as their own adaptations of the classic Greek Drama Oedipus Rex and the works of Lewis Carroll via Alice in WonderSLand and Through the Looking Glass. In addition, the company’s theatre has played host to many and varied events and performances, including Seanchai Library’s The War of the Worlds, which I reviewed during its initial run in 2011).

However, while operating a theatre company in a virtual world is a lot more cost-effective than doing so in the physical world, it is by no means free. So, in October and early November, the company held a very special auction, the proceeds of which will go towards meeting their on-going running costs. The Shakespeare By Request Auction offered Second Life residents the opportunity to bid for a member of the Avatar Repertory Theatre company to perform a selection from the works of William Shakespeare.

Now all of those who took part in the auction and residents of Second Life as a whole, are cordially invited to attend the results of this auction in the Shakespeare By Request evening.

Commencing at 17:00 SLT on Friday, November 21st, at the ART theatre in Cookie, members of the ART company will present the winning bidder’s requests. On offer will be pieces from Twelfth Night, Much Ado About Nothing, Henry V, Hamlet – and more!

So why not join the audience and enjoy a unique series of Shakespearian performances – and if you’re so minded, offer a donation to additionally help ART meet their running costs.

ART is a programme run by New Media Arts, Inc, a registered 501 (c) (3) tax exempt non-profit organization in the United States, which has recently released its first Go Fund Me Video in support of their mission to develop graphical, theatrical, literary, educational, library and other fine and practical arts on the internet, in 3D graphical user interfaces, multimedia, new generation computing devices, and other electronic and digital communication media.

further information on ART can be found at the Avatar Repertory Theatre company’s website and via  Facebook and Google+.