Dean Takahashi has a new article up at VentureBeat’s GamesBeat column, featuring a conversation with CEO Ebbe Altberg.

I admit to finding the title of the article, Linden Lab explores VR for its next-generation virtual world (interview), a little bit of a misnomer, given the article actually covers more ground than just the Lab’s new platform and VR. In fact, it’s fair to say that much of the focus of the piece is on Blocksworld, and not the new VW platform – which doesn’t make the piece any less interesting a read.

The article starts out by noting the company’s longevity and the fact that it has been in something of a transitional state (as we all know), divesting itself of almost all its existing products save Blocksworld and SL, while at the same time announcing it is heading down the road of building a new virtual world platform.

Takahashi suggests the reason for the Lab divesting itself of products is down to some of the products failing to have the right mix of talent, traction and resources to make their mark.

This is perhaps debatable; while Creatorverse and dio were perhaps lame ducks in terms of appeal, it has to be pointed out that both Versu and Patterns had potential – the former has since gone on to stand on its own two feet, and the latter already had a reasonable user-base even whilst still in a pre-release status (and its termination drew no small amount of upset from Patterns user on Steam).

In fairness to Ebbe Altberg, he does acknowledge the fact that some of the Lab’s nascent  products didn’t really get a chance to grown their own legs, and that some of them might well have worked out for the good of the company. However, hard choices were required, the Lab really being too small to handle everything at once (and we know what happens when it grows beyond its means: remember, the June 2010 layoffs came after a sustained 18 months of recruiting that saw staffing numbers increase by 50% for no demonstrable increase in revenue).

Turning to the meat of the article, it has to be said the the recent sale of Desura had led to some questions over Blocksworld’s future. However, Altberg’s replies to Takahashi about that product should put paid to speculation:

We’re also very excited about Blocksworld. I don’t know if you’ve had a chance to check that out before, but it’s a small up-and-comer. It’s one of the portfolio of non-Second Life products that we decided to stick with. We liked the user experience, the ease of creation, and the audience it targets: a much younger demographic than Second Life. Also, right now, it’s iPad only. It gets us into a lot of experience dealing with a younger audience. … You need to think about ease of use and simplicity but still enable them to create really powerful things, as well as working with the new medium of mobile. We’ve had good progress with this product. It’s still early, but we have good traction. The kids love it.

In addition, and further into the interview, Altberg indicates that the game has around 400,000 monthly users. How this translates to revenue flow beyond the actual purchase of the game is hard to judge. While additional building sets and expansion packs are available as in-game “purchases”, these are paid for through “coins” which users can earn, rather than having to necessarily buy. Even so, buying coins is the easier option, particularly where the expansion packs are concerned (see the video below), so there’s a reasonable chance that Blocksworld is proving a “nice little earner” for the Lab, even if it is nowhere on the scale of SL.

Beyond this, it would seem clear that the Lab have further plans to enhance Blocksworld, including the development of an in-game user-to-user economy, which will allow the sale of creations and builds between users, somewhat a-la SL. Also, Altberg’s statement that, “right now it’s iPad only”, suggests that an Android version of the game is still under consideration.

One of the blocksworld expansion packs

END_OF_DOCUMENT_TOKEN_TO_BE_REPLACED

I received an invitation to preview Canary Beck’s new exhibit which opens to the public on Thursday, November 20th in the attic gallery space at the Arts & Culture Community (A&CC) on Wanderstill Ode (when you arrive, go into the gallery and climb the stairs all the way to the top).

This is a highly personal display of 20 self-portraits married to lyrics from Jacques Brel’s 1959 classic Ne Me Quitte Pas (Do Not Leave Me), a song many may more readily recognise under the title If You Go Away, with (alternative) English lyrics by Rod McKuen (and which, while powerful, doesn’t measure up to the raw emotional content of the original).

The best way to describe the display is to use Becky’s own words:

I have aimed to express what I am only now able to express coherently in words. I’ve even lifted the titles for the pictures from the verses of Jacques Brel’s plaintive poetry set to music, feeling unable to write them myself.

These very personal pictures are the result of two months of taking hundreds of similar pictures on my bare white platform – most of which I obliterated soon after I took them. I never planned to share them. As I’ve reviewed these works for showing; however, I see them now like heavy pages in an old diary; a shabby book that reflects a threadbare me, depleted by gravity and, I hope, now hardly recognisable.

Even without the use of lyrics from the song, the pictures arranged around the walls of the gallery’s loft carry a powerful story. One doesn’t need to read the artist’s notes to understand the depth of loss and grieving represented in each picture. Yes, they are nude studies, but this also adds to their emotive strength; this is not the nudity of sensual posing for the camera – it is the nudity reflective of vulnerability, of being exposed to the world, defenceless, lost.

When taken with their titles, as drawn from Brel’s lyrics, each image becomes more emotionally intimate, drawing us into the artist’s thoughts and feelings: Je t’offrirai des perles de pluie – I will offer you pearls of rain; Je ne veux plus pleurer – I will cry no more; Laisse-moi devenir
L’ombre de ton ombre – Let me be for you the shadow of your shadow. All offer an emotionally charged reflection on the lyrics, and the tumult evident in the artist’s thoughts when taking the original pictures.

For me, the fact that we cannot, in any of the images, see the Canary’s eyes brings further depth of feeling to each piece. Shadow hides them from view, yet in many, shadow traces what might be the flow of tears from them; black pearls of rain traced over pale flesh.

All told, a remarkable exhibit, and one I cannot recommend highly enough. As noted, Ne Me Quitte Pas opens on Thursday, November 20th, and will run through until Saturday, January 201th, 2015. 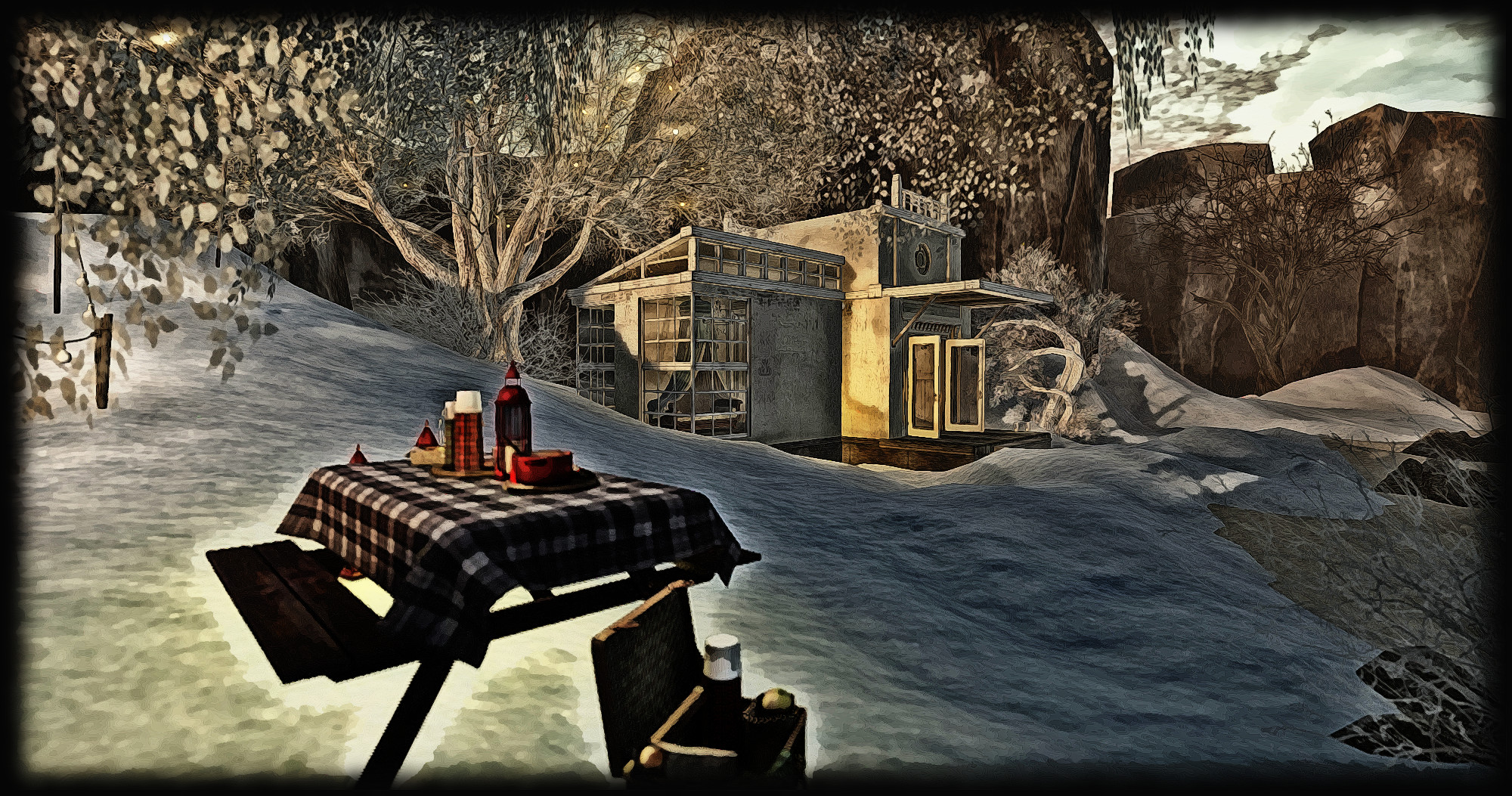 Fellow blogger Kate Bergdorf recently announced that following a winter make-over, she was opening her homestead region, Nordan om Jorden, to the public. Ever the one to explore pastures new, I hopped over to take a look.

The layout of the regions is deceptively simple, presenting a rural environment suggestive of a coastal farm in the midst of winter, snow heavy on the ground, trees pointing naked, gnarled branches towards the sky. A hardy, and late-growing crop sits within a field, offering a warm splash of yellow against the cold white of the snow, while a tractor sits on the edge of the field, the conditions on the ground not entirely conducive to harvesting the crop. 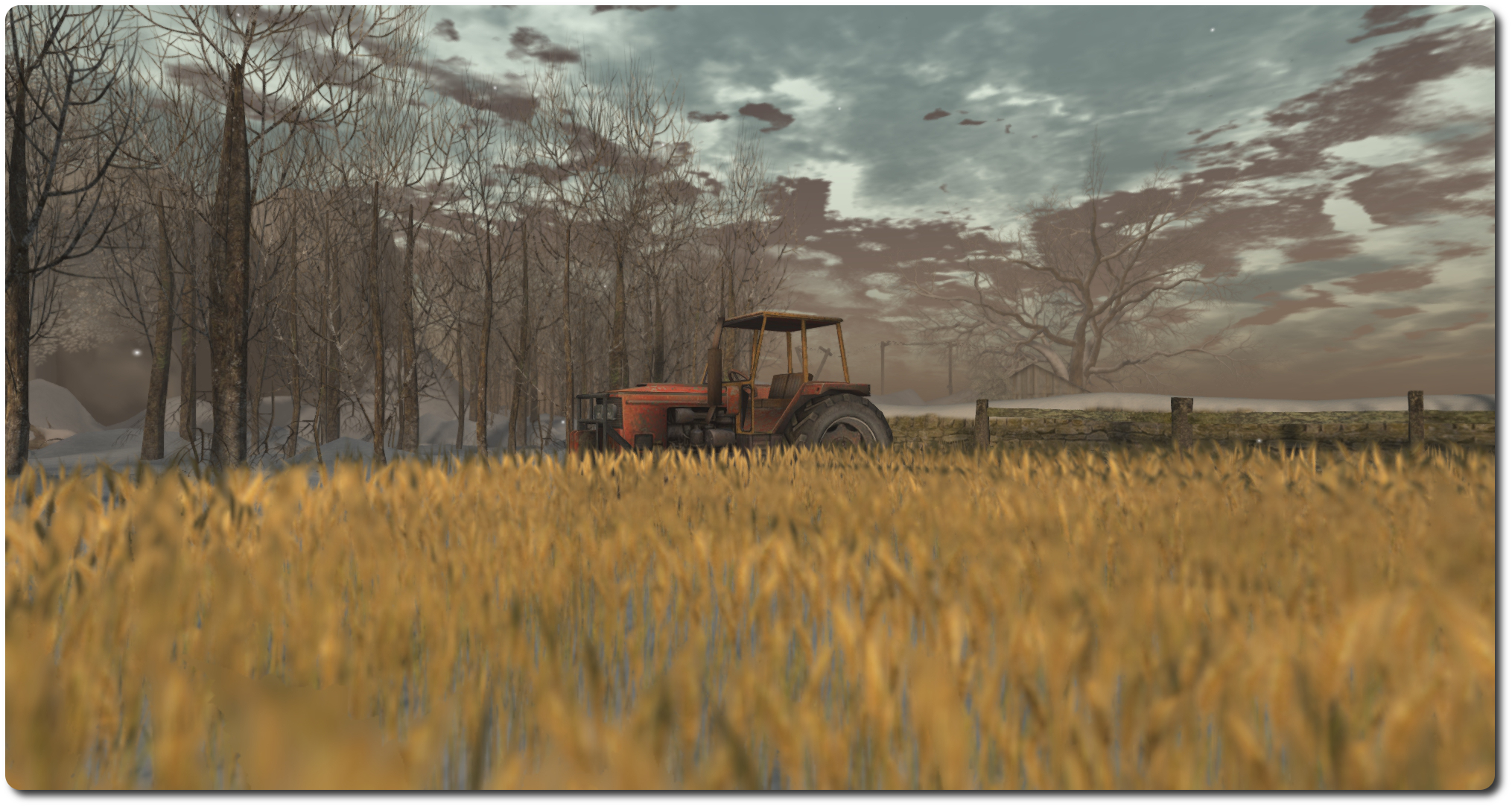 Beyond the field, horses wander through the snow, hay bales offering them something to munch on, while a rutted track, the snow within it furrowed, leads the way around a tall rocky outcrop, a gap within in providing access to the far side of the land.

Here sits a beach house sitting back from a sandy beach not entirely lost to the encroaching snow. Lights hang from the boughs of trees and a panic bench offers a Thermos of something hot to drink from the hamper beside it. Inside the beach house is a place to sit and a warming fire for those feeling the pinch of the cold. 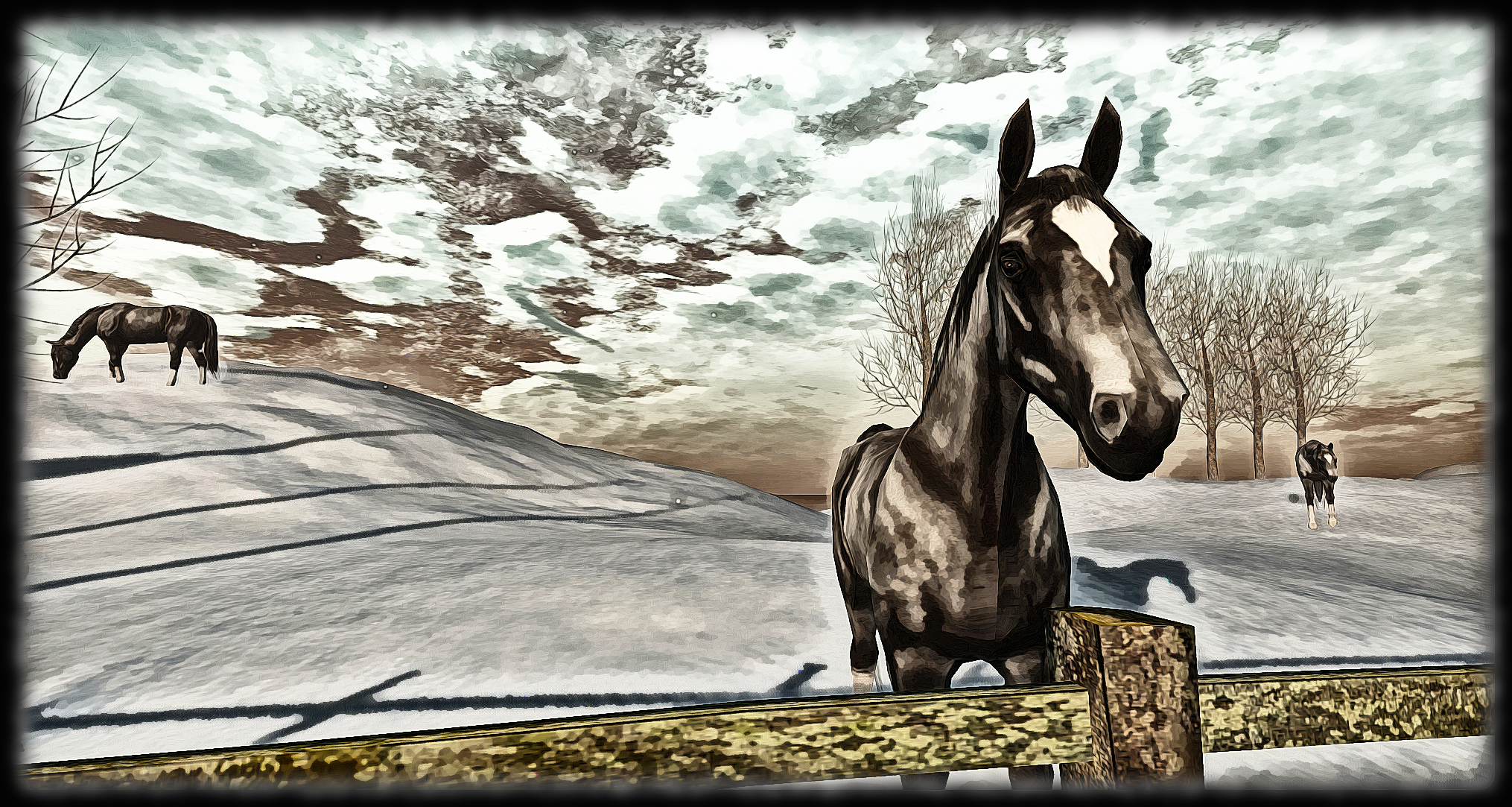 As noted above, this is a deceptively simple design, which offers a number of little winter vignettes with the fenced crop, crows wheeling overhead, the tree-lined track, the horses wandering across the snow, and sheep penned by walls and fencing …  all present their own photo opportunities which at the same time coming together to paint a complete picture. For those who are feeling active, there are a couple of rezzers which will provide you with a sled on which you can ride across the snow, while the beach house offers a quiet place to sit and talk.

At the time of writing, one part of the region is closed to visitors. This is the southern part of the island, reached via a stone bridge. Called Floodwood, it is currently still being worked on (hence being closed) and I understand that Kate plans to offer rentals there for those looking for a place to live. 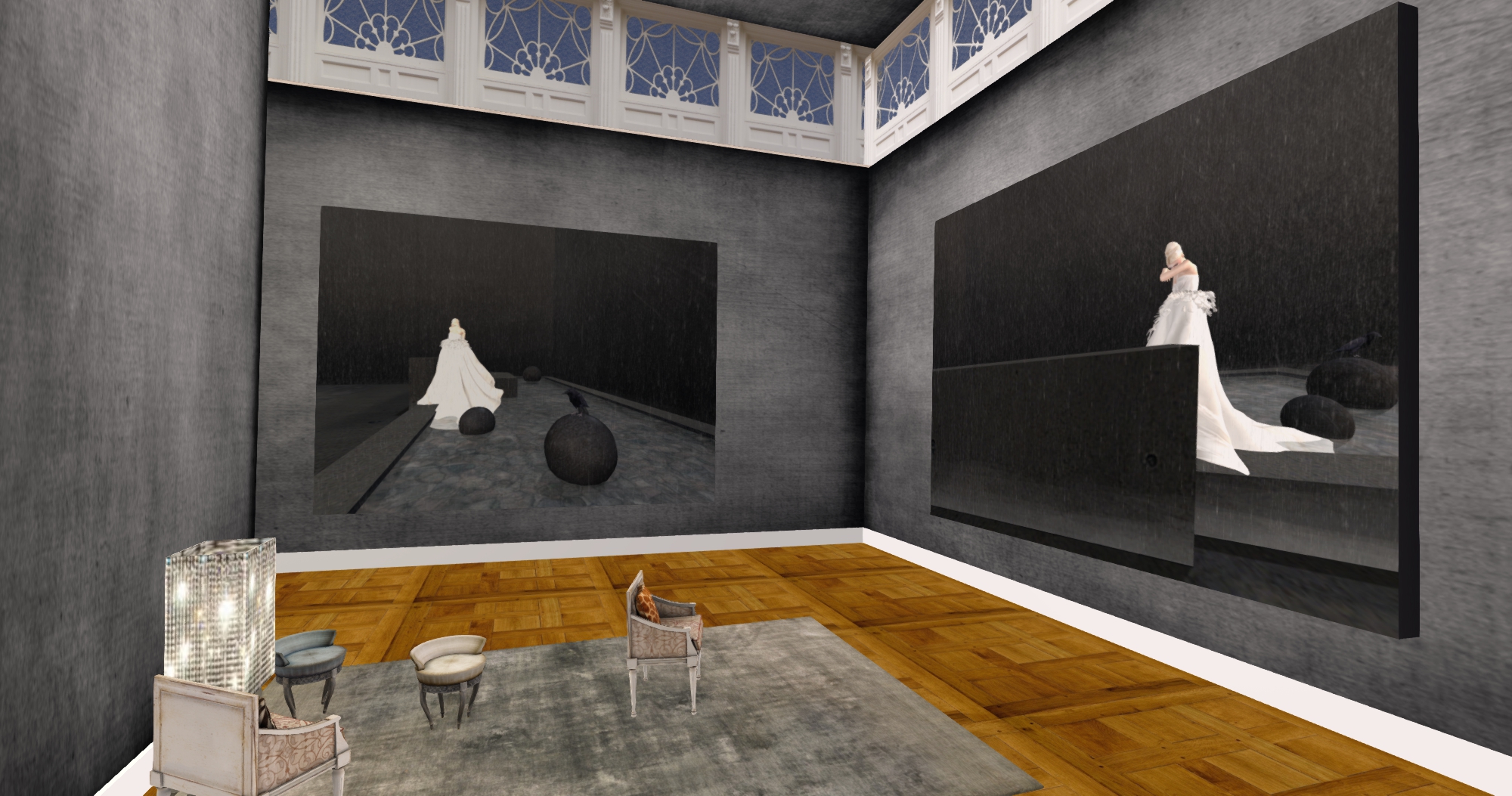 Another point of interest for visitors lies not on the ground, but up in the air over the region. This is Kate’s new art gallery – BERG. This is located in a cosy skybox offering an intimate space in which work by invited artists can be displayed. You’ll need to use the SLurl in the link above to reach the gallery (at least for now), as there is no direct TP from the ground. At the moment, examples of Kate’s own work are on display, but the plan is to feature artists on a three-month rotational basis. The gallery will likely focus on – but not necessarily be limited to – fine art photography, fashion photography, landscape photography, erotic photography and portrait photography.