Things are liable to be getting busy in terms of TPV viewer updates over the next month or two. As noted in this blog, the Lab has now released their HTTP pipelining code for the viewer, which TPVs are being encouraged to adopt as soon as they can, and there have been a spate of other updates and fixes for the viewer that already are, and will be finding their way into TPVs.

Black Dragon received two release updates in the space of around 24 hours. The first came when NiranV Dean released version 2.4.0.3 on October 29th, and the second saw the release of version 2.4.0.4 on October 31st.

A blog post on Niran’s website outlines the principle changes which appeared in the 2.4.0.3 version of his viewer, summarising them as:

The 2.4.0.4 release is, in terms of user functions, the same as the 2.4.0.3 release; the major difference is that he has the Lab’s HTTP Pipelining updates included (which Niran has, for some reason referred to as the “CDN code”).

Geenz Spad’s work on glossy projectors can be found in JIRA  STORM-2067. This corrects the tendency where, depending on a surface’s environment intensity, projected reflections they become more blurred as their intensity increases, they should become sharper for higher gloss values and more blurred for lower values.

As always, full details of all changes can be found in the change logs for the viewer.

This is another progressive step forward with Black Dragon, with Niran working to address issues as well as integrate updates from both LL and other developers which help further enhance the viewer and take it in a direction which matches the Lab’s important HTTP updates as well as enhancing the features Niran uses to help differentiate his viewer from other TPV offerings.  Black Dragon users should be pleased.

END_OF_DOCUMENT_TOKEN_TO_BE_REPLACED 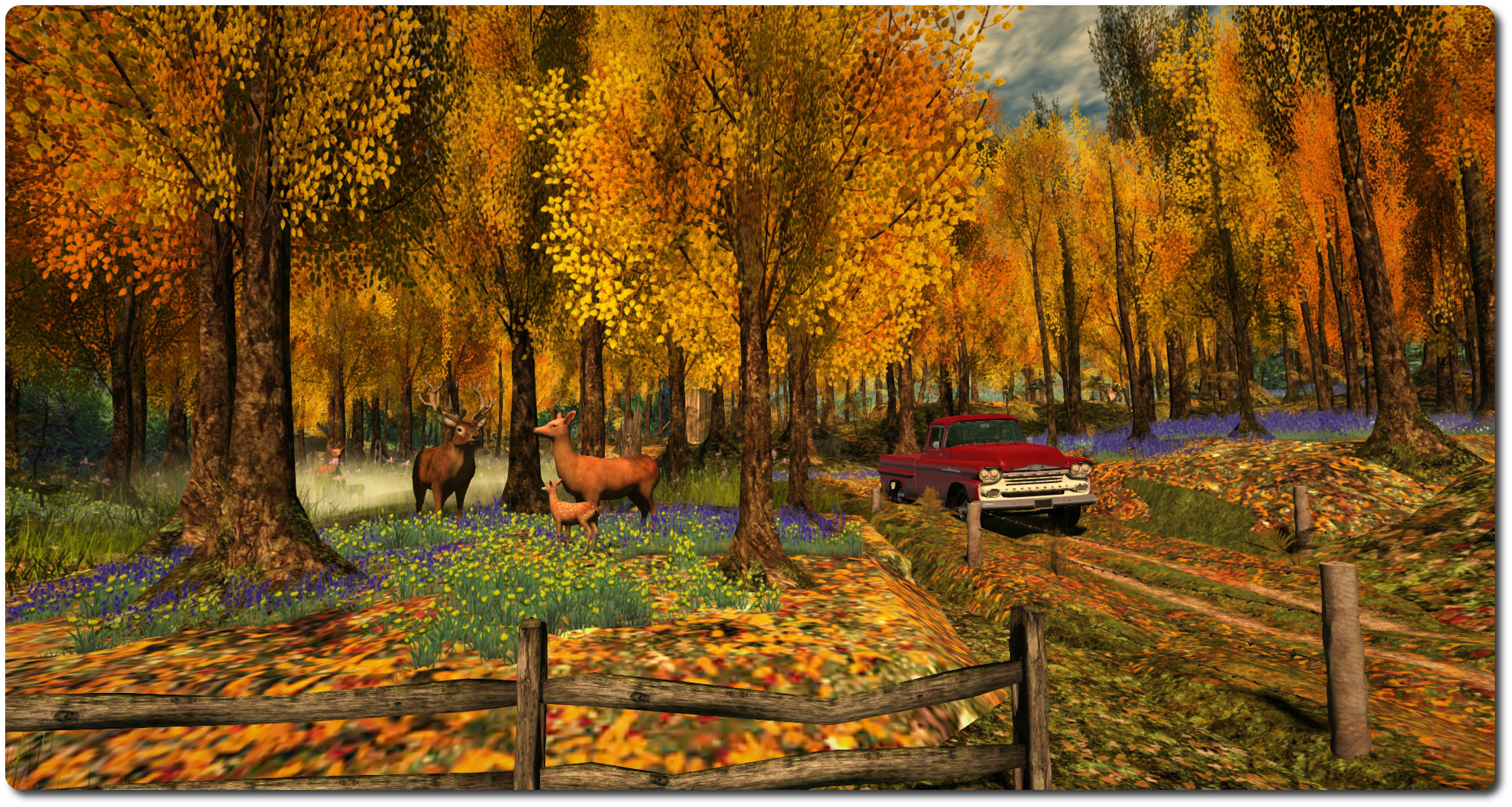 The Back 40 has closed, SLurls have therefore been removed from this article.

I’ve often remarked that you don’t require an entire region – full or homestead – to create something very special, and I’ve blogged about a number of places in Second Life that prove that very point, such as Melinda Palianta’s beautiful Crystal Oak Falls, where she presents the wonderful gardens around her house for visitors to enjoy. Or perhaps the Moonlight Teahouse, the work of SL entertainer Myron Byron, or Kusanagi by Framboise Werribee.

I recently came across another such treasure which, like the Moonlight Teahouse and Kusanagi, sits in a mainland region. Called The Back 40, it is the work of “Dicky” Dick Spad, and it’s an absolute must for anyone with a love of nature. 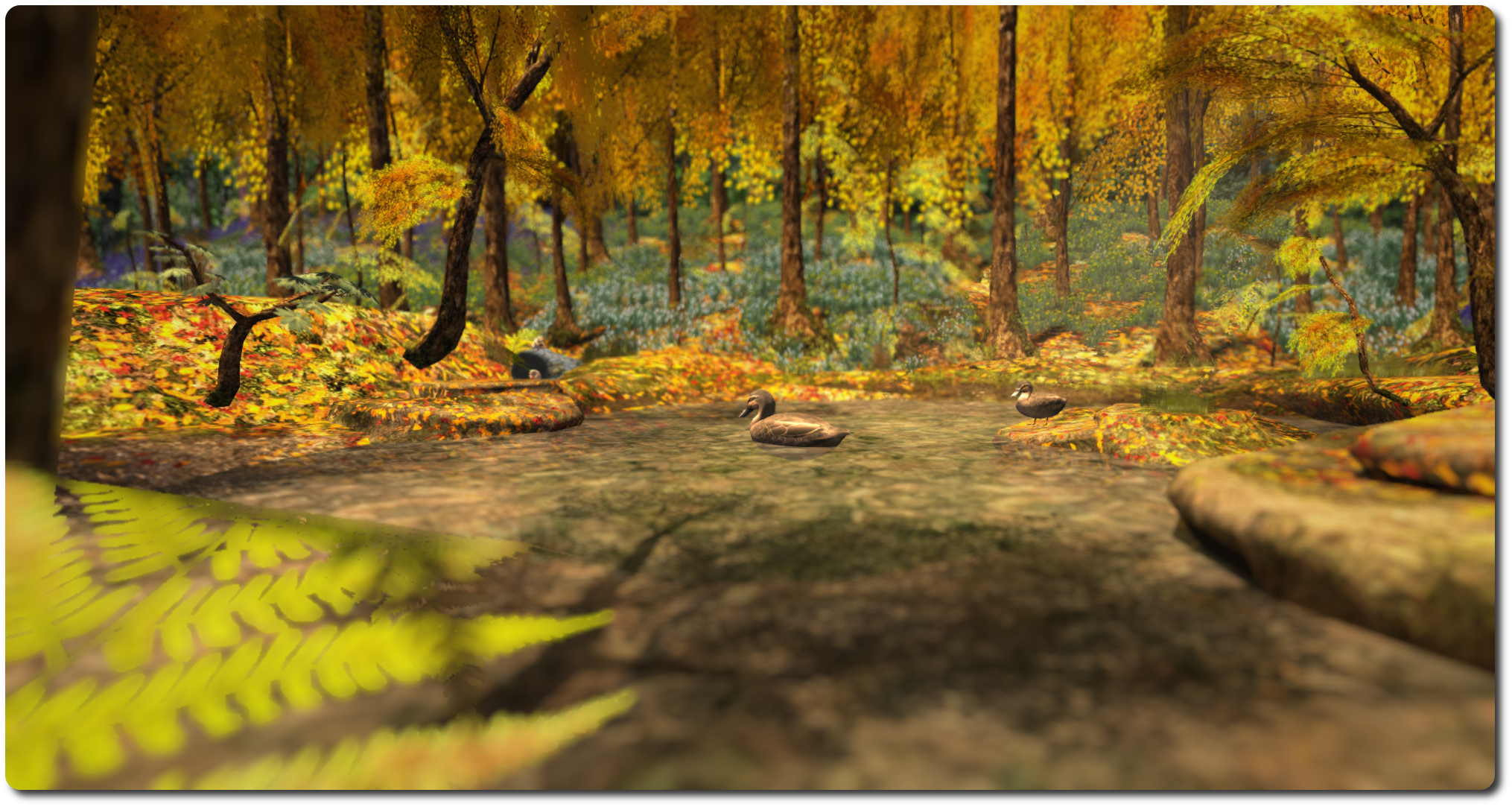 Sitting just off Route 8A on the continent of Satori, and so reachable by road for those who fancy a drive, The Back 40 covers a mere 3568 square metres. But within that space, it presents visitors with a delightful woodland setting, complete with local wildlife, opportunities for wandering, places to sit, and of course the chance to take pictures – something Dick welcomes in the About Land description for the land, where he also invites people to come and relax.

The parcel really doesn’t require that much of a description, as it speaks well enough for itself. Extensive use is made of Alex Bader’s terrain scenery, which presumably allows the woodlands to change colour with the seasons, if desired. Right now they are rich with the golds, reds, oranges and greens of autumn. Mist rolls between tree trunks and over the long grass, offering a photogenic opportunity for those who love misty morning  / evening scenes. Care has also been taken to blend the woodlands into the surrounding area, so they appear quite natural, with a couple of screens have been used to good effect on two sides of the land to add a further sense of depth. 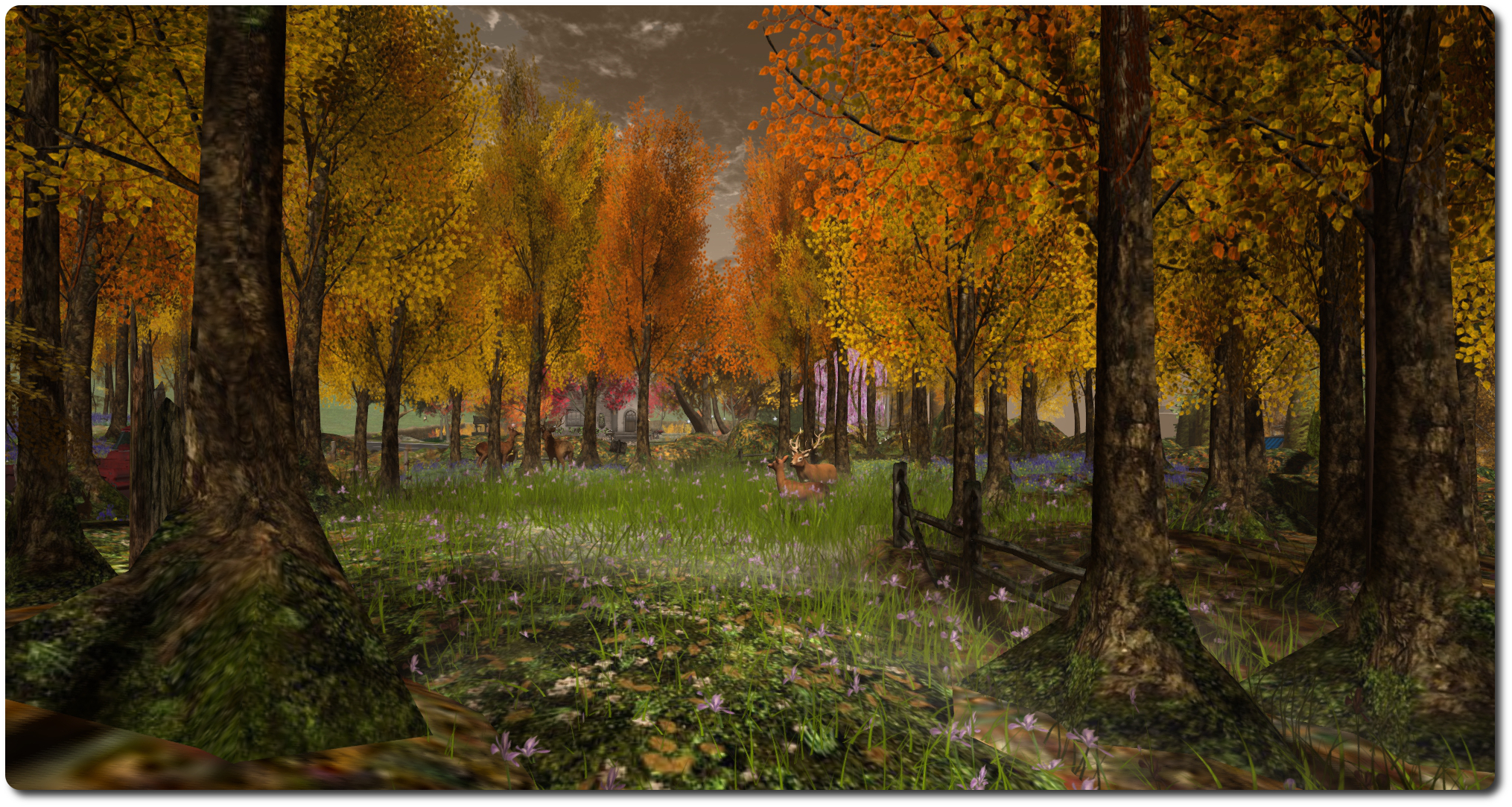 There’s a considerable amount of detail packed into the scene, some of it obvious, some of it perhaps easily missed if time isn’t taken in exploring, and there is plenty of wildlife to be found. It’s also worth having local sounds enabled, as Dick has taken care in blending bird song and deer calls into the scene, again adding to the immersive feel.

All told, a lovely corner of Second Life, well worth a visit. 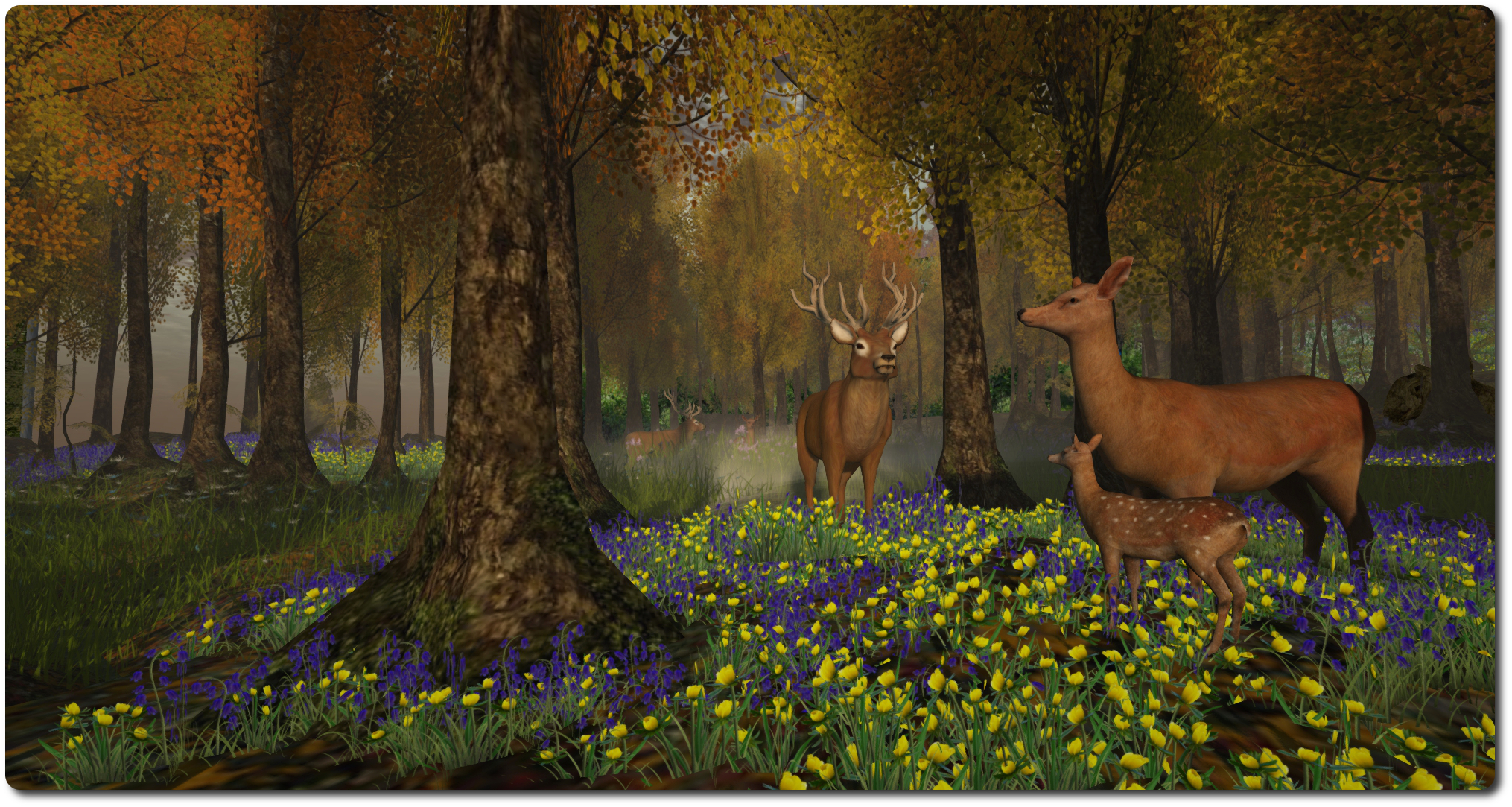 On top of their feature blog post on recent improvements to SL, on which I also blogged, the Lab has also issued a Tools and Technology update with data on the initial deployment of the CDN.

Entitled CDN Unleashed, the post specifically examines the percentage of simulator servers experiencing high load conditions (and therefore potentially a drop in performance) on the (presumably) BlueSteel RC both before and after deployment of the CDN service to that channel – and the difference even caught the Lab off-guard.

While a drop in load had been expected prior to the deployment, no-one at the Lab had apparently expected it to be so dramatic that it almost vanishes. Such were the figures that, as the blog post notes, at first those looking at them thought there was something wrong, spending two days investigating and checking and trying to figure out where the error in data came from – only it wasn’t an error; the loads really have been dramatically reduced.

Second Life was originally designed for nearly all data and Viewer interactions to go through the Simulator server. That is, the Viewer would talk almost exclusively to the specific server hosting the region the Resident was in. This architecture had the advantage of giving a single point of control for any session. It also had the disadvantage of making it difficult to address region resource problems or otherwise scale out busy areas.

Over the years we’ve implemented techniques to get around these problems, but one pain point proved difficult to fix: asset delivery, specifically textures and meshes. Recently we implemented the ability to move texture and mesh traffic off the simulator server onto a Content Delivery Network (CDN), dramatically improving download times for Residents while significantly reducing the load on busy servers.

Download times for textures and meshes have been reduced by more than 50% on average, but outside of North America those the improvements are even more dramatic.

Quite how dramatic for those outside North America isn’t clear, quite possibly because the Lab is still gathering data and monitoring things. However, the post does go on to note that in combination with the HTTP pipelining updates now available in the current release viewer (version 3.7.19.295700 at the time of writing), the CDN deployment is leading to as much as an 80% reduction in download times for mesh and texture data. Hence why the Lab is keen to see TPVs adopt the HTTP code as soon as their release cycles permit, so that their users can enjoy the additional boost providing the code on top of enjoying the benefits offered by the CDN.

Again, at the time of writing, the following TPVs already have the HTTP pipelining code updates: