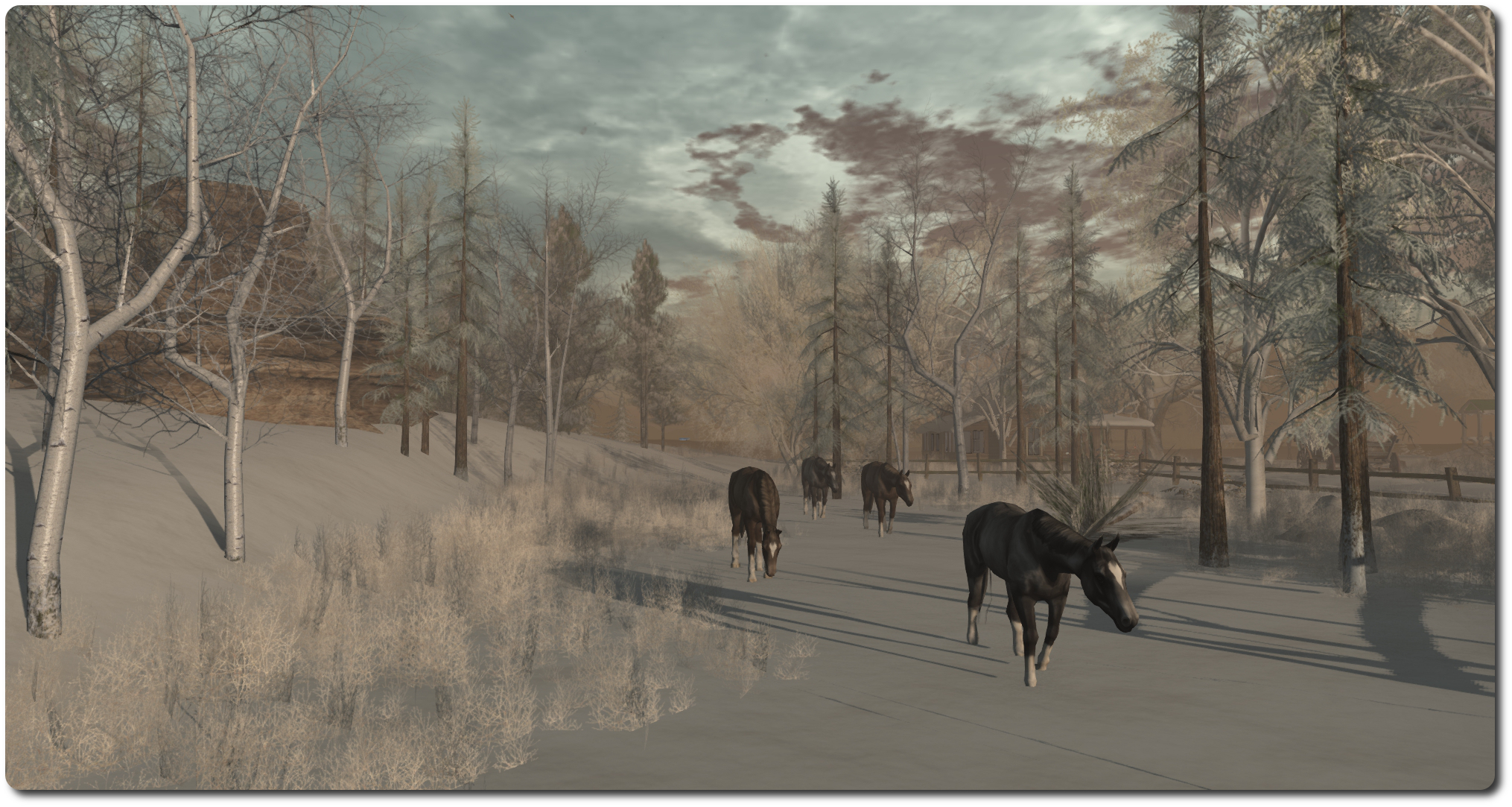 I last visited The Pines at Jacob’s Pond in February 2014, when an early spring was in the air. Now, with many regions embracing an autumnal feel in keeping with the turning of the seasons in the northern hemisphere in the physical world, The Pines has embraced a wintry scene. 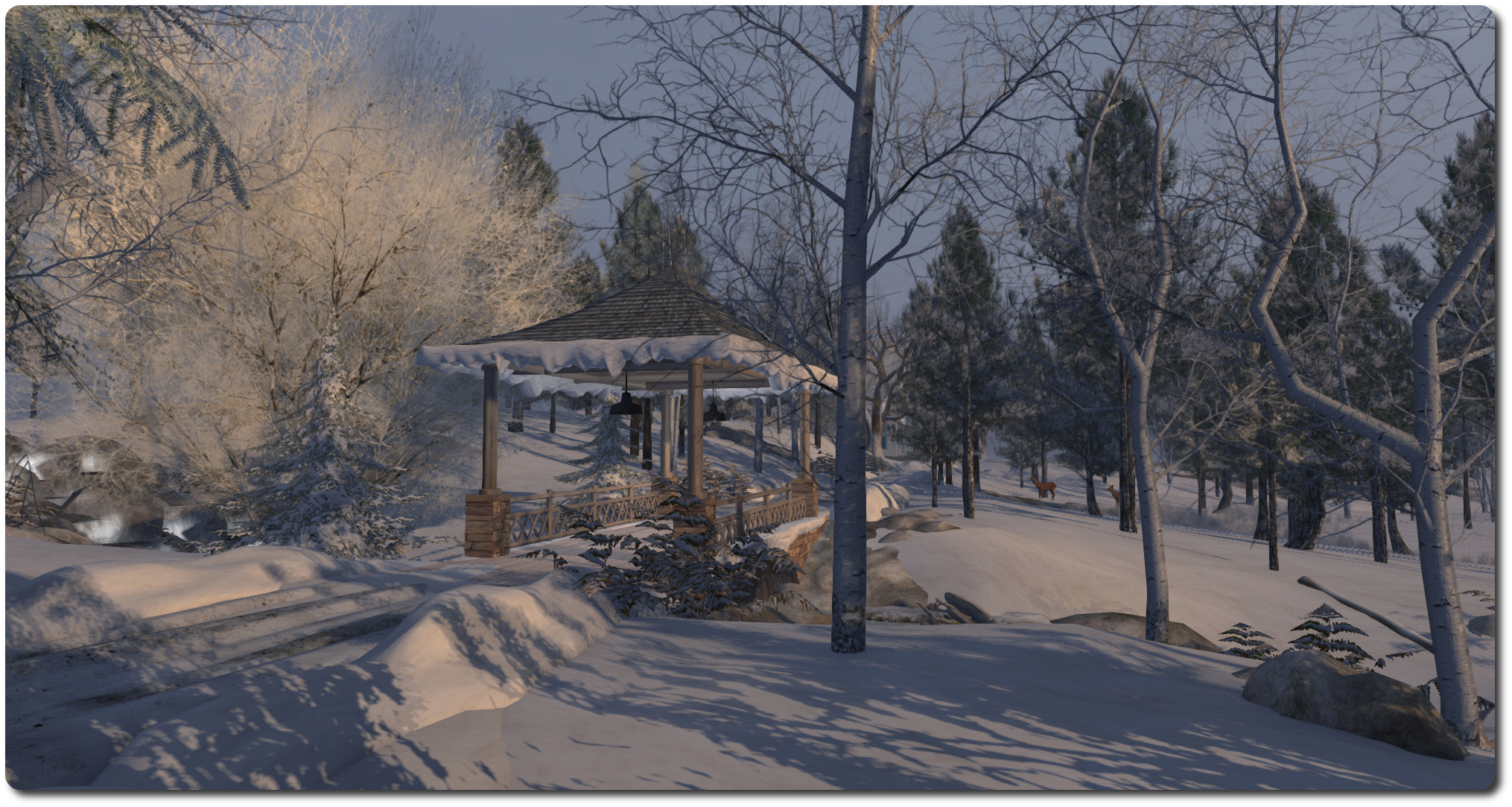 The new scene brings with it a new design for the region. The lake is frozen, snow lies heavy on the surrounding farmlands and in the boughs of the trees; deer forage for grass and horses exhale colds of warm breath into the cold morning light. 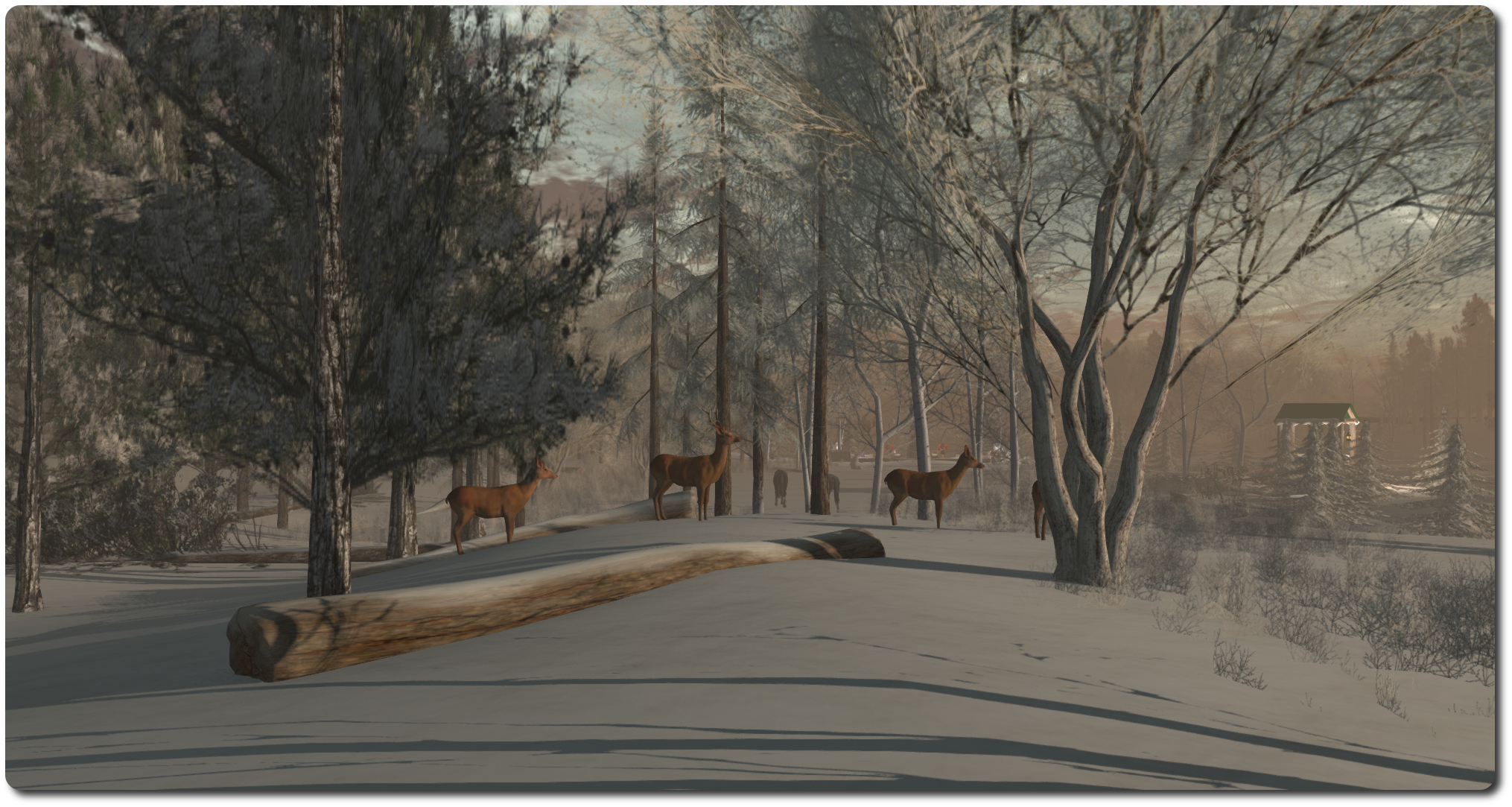 Dacotah Longfall, who designs Jacob’s Pond, offers a warm welcome to visitors arriving in the small cabin on the south side of the region, inviting them to enjoy her backyard – and noting that clothing is optional. With the snow on the ground and the misty look to the air, I’m not sure this is advisable! 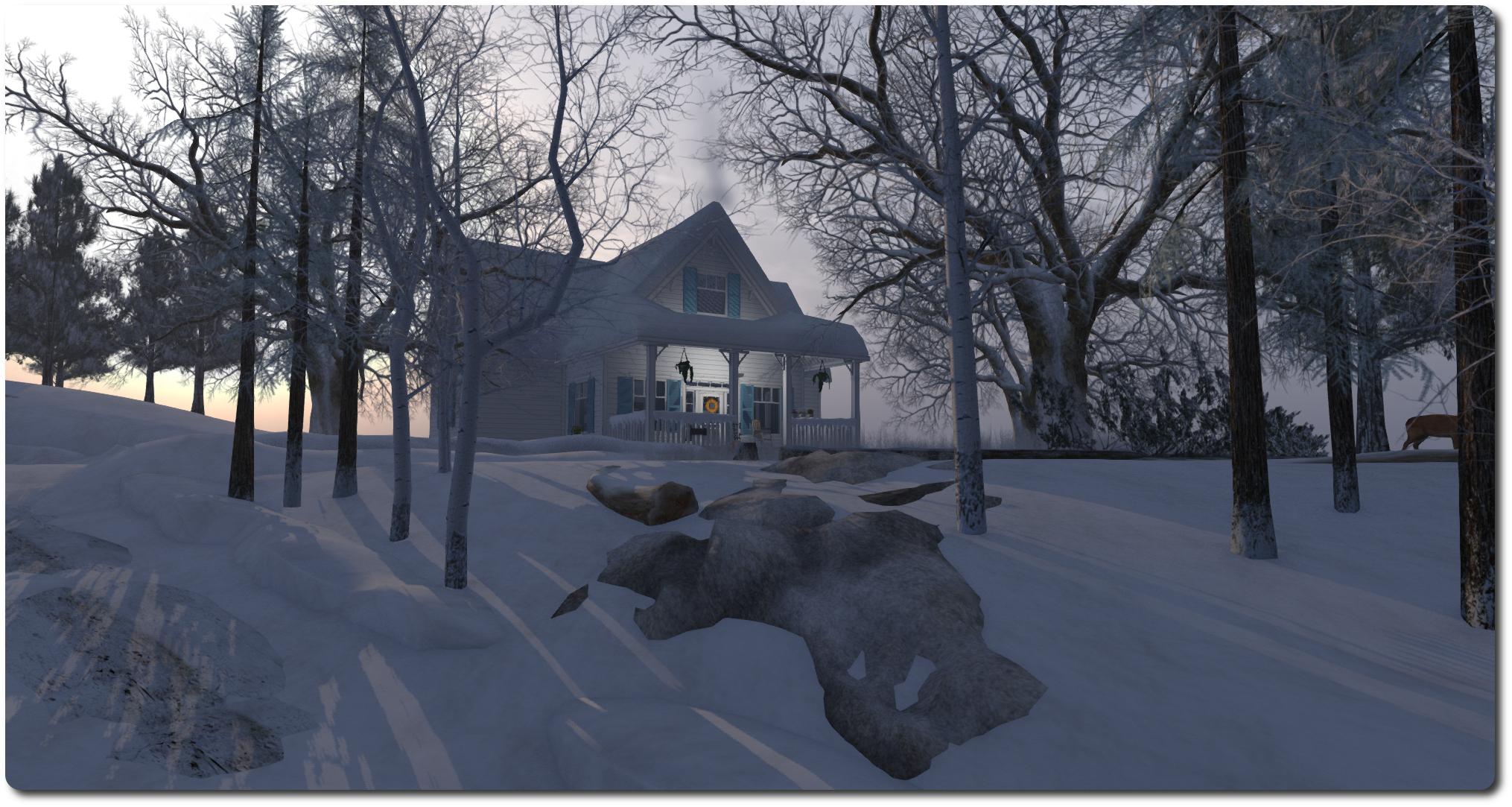 Snowy paths wind across the region, with lamplit bridges helping to guide the way over the frozen streams, guiding the way around the lake and to the barn, and to farmhouse up on the hill to the north. These don’t have to be followed, visitors can wander as they please, and – as ever – there are plenty of opportunities for photography.

All told this is a another delightful redressing of a region which never fails to please. It might seem a tad early for thinking about the depths of winter, but The Pines at Jacob’s Pond presents the perfect image of snow and crisp skies we probably all love. 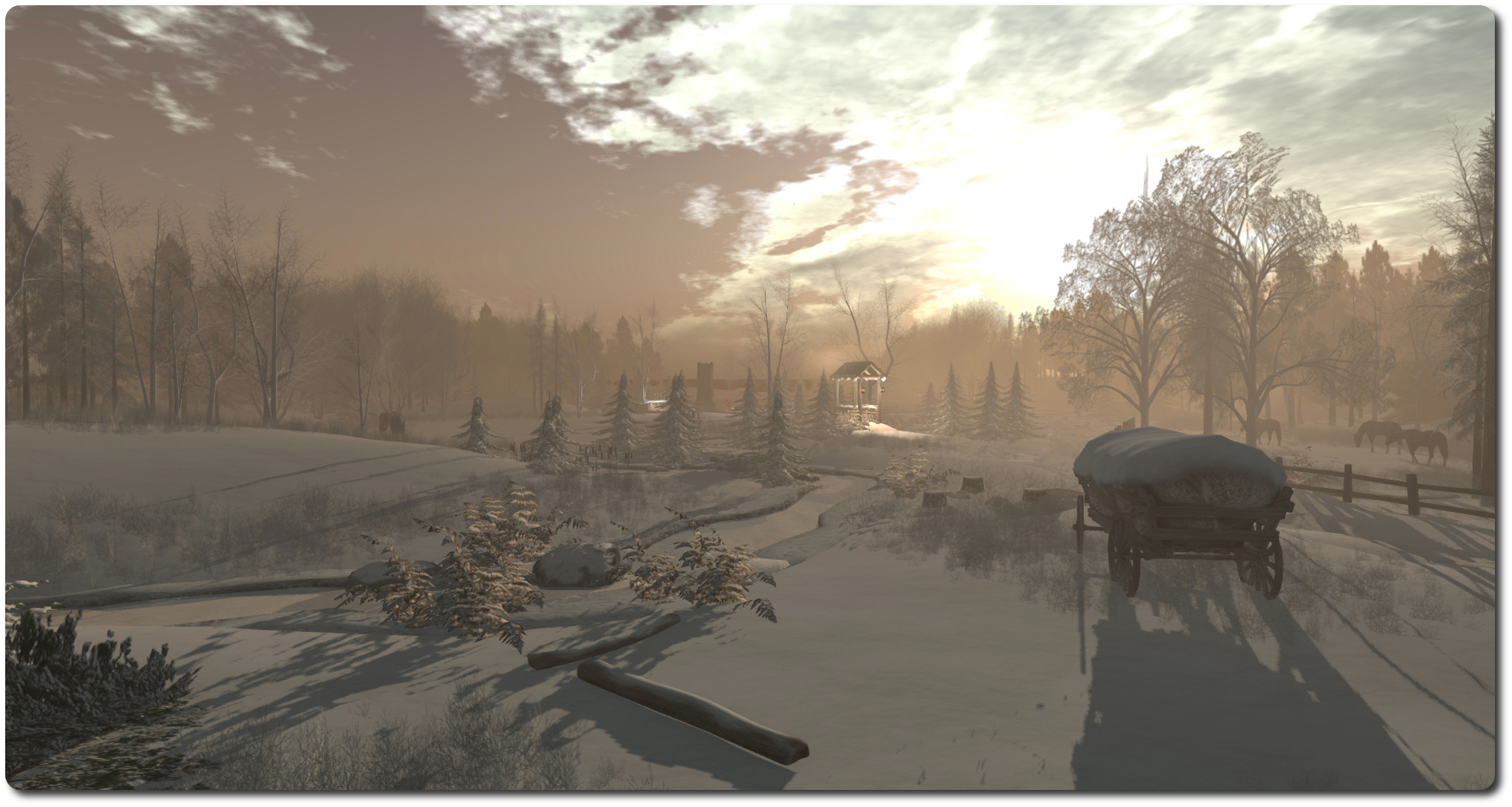 The Pines at Jacob’s Pond forms a part of the End of Time group of regions, if you’ve not visited the estate, I can only recommend that once you’ve explored The Pines, you pop across to Nu Haven, Tide, Eotia, Wabe, Crow, and Gyre. All make for wonderful exploration.

On Thursday, October 23rd, I wrote a piece about Magic Leap, and their augmented reality project that has garnered some US$600 million in investment since February 2014, and which drew the likes of Google and Legendary Pictures to the “B” round of funding that raised some US$542 million.

I’m not alone in pointing to Magic Leap and the fact that no-one outside a select few know what it is, precisely. Nalates Urriah has blogged on the subject, referencing a French video describing a Pepsi Max UK promotional stunt pulled earlier in 2014, as possibly indicative of the idea behind Magic Leap.

I remember seeing the video, filmed in London’s New Oxford Street, when it first aired in March 2014. While it is likely pretty well removed from anything Magic Leap are doing, it serves as an illustration of overlaying digital media on the real world. It’s also fun to watch, so I thought I’d embed the original here. Enjoy!

As I noted in a previous post, the first Making Strides Against Breast Cancer walk will be taking place in Second Life on Sunday, October 26th, 2014.

The event will take place around a track laid out across two regions adjacent to the American Cancer Society island, and will run from 09:00 SLT through until 17:00 SLT, and be followed by a special party from 17:00-19:00 SLT, giving everyone the opportunity to drop in and help raise funds for ACS as a part of the overall RFL drive.

There will be hourly themed walks, allowing people to get fully into the sing of things, with a special Survivor and Caregiver Hour from 11:00 through noon, and a Remembrance Ceremony from 16:00 through 17:00.

The regions have been beautifully dressed to provide a summer-like walk through woodlands, with an oval cobbled path forming the track, lined with small cabins where sponsors and supporters of MSABC are offering items for sale (all proceeds of which go directly to MSABC / RFL or SL). I’ve given graciously been given a little cabin of my own!

In the centre of the two regions are places to meet and chat with friends, spaces to rest and remember, a pergola were various activities will be held – even a maze to enjoy. The schedule of activities remains as previously published, and I’m including it here for reference:

So why not take a little time on Sunday and join the walk?

About Making Strides Against Breast Cancer

Making Strides Against Breast Cancer or MSABC is the largest network of breast cancer awareness events in the United States, uniting more than 300 communities across the country. Every breast cancer walk run during the MSABC’s season is seen as an incredible and inspiring opportunity to honour those who have battled breast cancer, raise awareness on how the risk of breast cancer can be reduced, and to raise money to help the American Cancer Society fight the disease with research, information, services and access to mammograms for women who need them.

The following notes are drawn from the TPV Developer meeting held on Friday, October 24th, and shown in the video above. Time stamps, where relevant, have been included for ease of reference to the video. Note that items are listed according to subject matter, rather than chronologically, so time stamps may appear out-of-sequence in places. My thanks as always to North for the recording.

Both of these viewers have performed well both in the RC role (HTTP Pipelining) and project viewer (in the case of the Benchmark viewer), and it is likely one or the other will be promoted in week 44 (week commencing Monday, October 27th), although the promotion may not occur until later in the week, depending on how these new releases perform.

[01:58] The Experience Keys project viewer is in the “final throes” of bug fixing. However, it is unlikely to appear as an RC viewer until after the next set of server-side Experience Keys have been deployed. When this will be is unclear. It is not “imminent”, but by the same measure, it is not “distant”.

[02:33] The Oculus Rift work continues, but again, this is unlikely to move beyond being a project viewer until such time as the Oculus hardware is more generally available. The Lab will continue to keep the viewer code base current with releases, and will doubtless continue to test and refine as further SDK updates appear (such as the just-released 0.4.3).

[03:16] Progress is continuing to be made with the viewer-managed Marketplace updates (VMM). There is now a technical wiki page for the web API available, and Skylar Linden was on-hand to provide and overview of the page, which by his own admission, is “pretty dry stuff”, but includes things like:

[08:40] The ability to delete listings is a feature that is new to the Marketplace as a result of VMM, although it is somewhat confusing in that  – as Brooke Linden explained in the meeting – it doesn’t actually delete anything, but gives a means for merchants to remove listing information by making it unavailable. As such, listings deleted in this way will be non-recoverable.

[10:03]  The Lab is now “very close” to getting the VMM updates available on Aditi’s Marketplace. When this happens, testing will initially be with a “small group” of merchants and TPV devs using a project viewer, the code for which will be made available as the testing starts in order to allow TPVs to integrate it into test versions of their viewers. If all goes according to plan, this initial test could start in the next couple of weeks, with the aim of getting initial feedback.

Once this has been done, testing will by opened-up to allow wider involvement. This is expected to happen “within the next couple of months”, and will be aimed at allowing anyone who would like to try VMM. There will be a beta testing application form made available for those interested.

[13:45] The Lab have been continuing to roll changes to group chat, and the thinking is that the results of the changes are “pretty good”, and the Firestorm support team are reporting they’ve seen an improvement as well. As noted in part 2 of this week’s update, the work isn’t finished – Simon is looking at the possibility to improve code elsewhere in the system; there is also liable to be a round of code clean-up as well. However, Oz cautioned that the Lab may have implemented the changes which may have the biggest noticeable impact in terms of improving the group chat experience.

[14:49] Again, as noted in part 2 of this week’s report, the CDN is now supporting all the primary Server RC channels. so far, the results have been “excellent”, but the Lab is waiting to see how things fair over the weekend, when the grid is liable to see its heaviest use in terms of numbers of users on-line since the RC deployment was completed this week.

The load on the sim host Apache services is described as “way, way, way, down”, which is a good thing, as it means that all the other things the Apache services have to do (such as participating in region crossings) are no longer being impacted by the simulators handing the texture and mesh fetching loads.

One offshoot of the CDN work is that the Lab is likely to spend time validating whether the viewer cache is working as well as it could be, even allowing for the interest list updates. There are apparently differences in how well the cache works across different code-bases, so this is something that TPVs may well be involved in as well.

There has been no further progress on this since the last TPV meeting.