Further art entires  – including the first machinima pieces – have been received in the UWA’s Transcending Borders combined Art and Machinima Challenge which offers a combined prize pool of some L$1,030,000 for entrants, plus L$240,000 in audience participation prizes.

The latest art entrants and entries are (in no specific order):

Mistero Hifeng, who presents I … io (seen at the top of this article), a representation of what it means to risk losing oneself by exceeding one’s limits, seen as the figure slowly dissolving into a thousand pieces.

Takni and Misio2, who have entered the very interactive Offworld. Take the teleport ot ring the bell to ride a train off world – from the colourful station to a sky platform where a question – bordering on a riddle – is asked: Ever wondered how many shapes you can build with 30 equal cubes? Touch the cubes and find out not only the simple answer to the question, but also to the underpinning riddle, as the artists state, “A shape made of cubes is a ‘shape’ not because the cubes are arranged in a certain way, but because it summons shapes in your memory. So virtual worlds are basically made of inner worlds.”

Corcosman Voom, presents The Tribes Go Up  (above), of which he says, “When I read the theme Transcending Borders, I thought about tribes meeting on neutral ground for the purpose of trade and other mutually beneficial activities. Butterflies don’t do that, of course……but that’s what I thought about.”

Misio2 also presents Pendant “Planet Takni”, a piece featuring meshwork by Zoran, and which “was inspired by SL toy maker  Takni,  executed in RL in sterling silver with opal, pearl and diamond, and imported to SL , to make us all fly.”

Touch the Wall by Yepar Saenz is another interactive piece inviting you to do just that – touch the wall of cubes, which will rearrange itself into iconic structures or national flags, symbolising the struggle for national identity.

iSkye Silverweb considers the artificiality of national borders in Nature Sees No Borders (above), commenting, “The borders of the earth only exist in the minds of its human occupants. Look upon the earth from space. You won’t see any lines. They are only drawn on maps – artificial, imposed for the convenience of mankind.” And just as nature ignores these artificial boundaries, sharing its bounties among all of us, so should we endeavour to cease being divided by the borders of out own making, be they lines on a map, division of race or culture or wealth or social status or physical ability.

Ronin1 Shippe’s The Lute Player “is about transcending the borders between the “real” and the imagined, between music (the theme is a lute player) and the mind, and between the western and the eastern (the woman depicted is a Japanese geisha, her face a mask of concentration, as her fingers dart over the strings).

Quantum Shift – A Journey into Perpetual Motion and Organized Chaos, by Slatan Dryke, represents the development of the human brain from cro-magnon man to modern times; a journey that has led us from “stone knives and bearskins” to understanding the human genome itself. All acheived through “the perpetual motion and the organized chaos of the brain’s synapses, neuro-transmitters have as border only a subtlety of their actions, that does not seem to belong to the real world but at the same time is our time, our world every second, every day for a life in constant evolution.”

All of the art entries for the challenge can be viewed in the UWA’s Transcending Borders gallery space.

Machinima submissions for the challenge have been received from NicoleX Moonwall, with Transformation, The Long Journey Home, shown above, Dreaming by Valentina Tremont, Misio2’s Virtual Toy Island Plankton, and JJCCC Coronet’s What a Wionderful World, while Sophia Yates presents Transcending Borders.

All of the machinima entries for Transcending Borders will be available via the SLArtist website.

Full details on the challenge, including all rules and details on how to submit art and machinima entries can be found on the UWA blog. Note that if you intend to enter, all submissions must be received no later than midnight, SLT on October 31st, 2014.

Not an Artist or a Machinima Maker? You Can Still Win a Prize

There are special prizes on offer in the audience participation part of the challenge (a total of L$135,000 for participating in the art section and a total of L$105,000 in the machinima section). All you have to do is list your personal Top Ten entries in either the art or the machinima sections of the challenge (or both!). Prizes will be awarded to audience members whose top 10 lists most closely align to the final juried top 10. Keep your eyes on the UWA blog for details on how to enter.

Note: the images and machinima included in this article should not be taken as any indication of my personal preferences as a member of the  Transcending Borders jury. They are included purely for the purposes of illustrating this article. 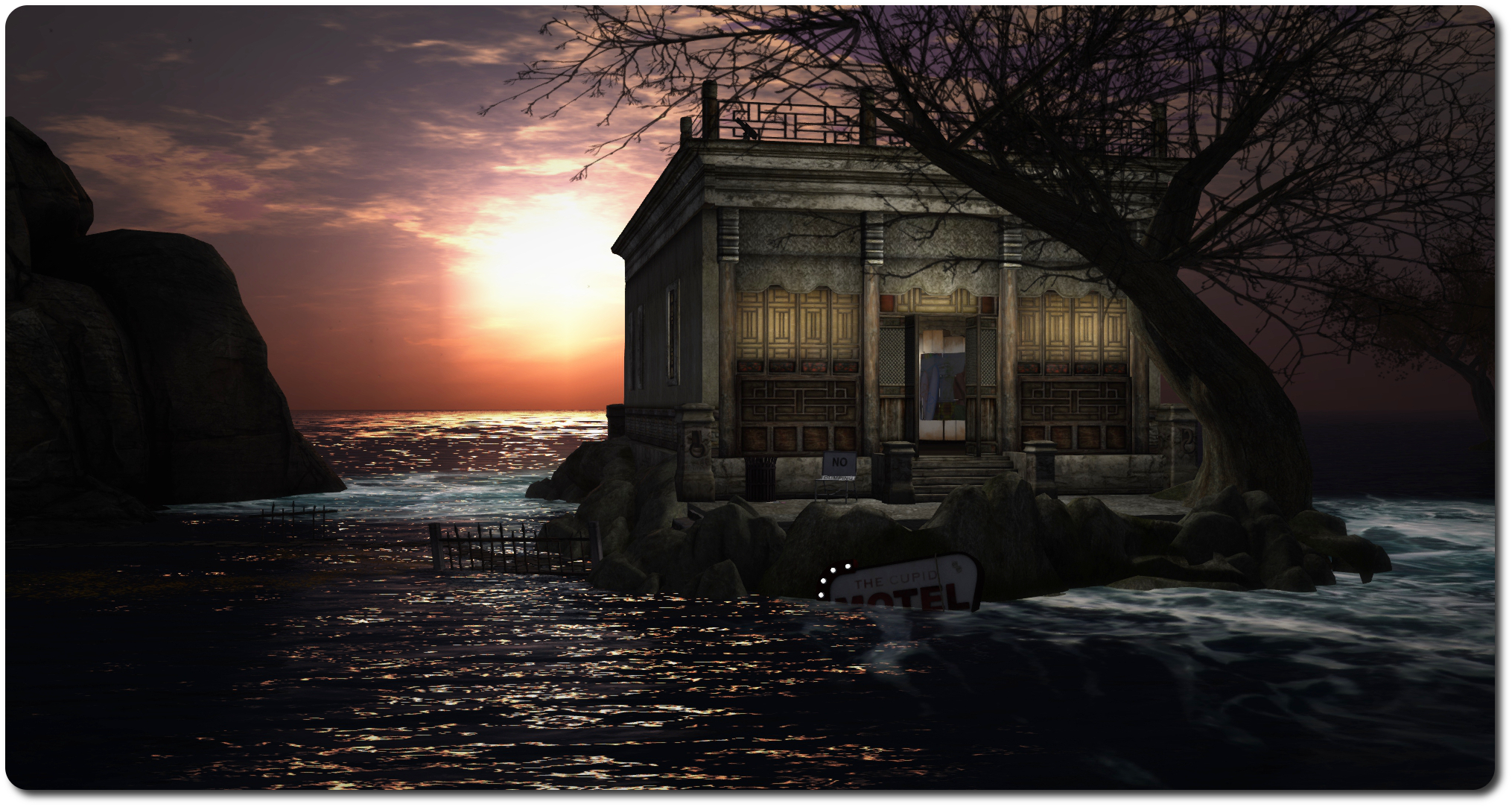 As always, please refer to the server deployment forum thread for the latest news and updates.

The RC update was to fix BUG-7329 “RemoteParcelRequest cap returned by a skill gaming region does not exist (returns HTTP error code 404)”.  In the official viewer, this capability is mainly used to show parcel script info, but some TPVs use it to show the parcel_id of parcels as well.

The new log-in screen RC viewer was updated to version 3.7.17.294762 on September 29th, although it didn’t appear on the Alternate Viewers wiki page until either September 30th or October 1st.

Speaking at the Server Beta Meeting on Thursday October 2nd, Maestro Linden confirmed that there are now 28 regions using the CDN service for texture and mesh asset data. A full list of regions is still not available, but among the new additions are Morris, Dore, Ahern, and Bonifacio.

These regions are all running on the Snack RC. There is unlike to be any wider deployment to a larger RC in week 41 (commencing Monday October 6th), as the Lab is still fine-tuning their gathering data. However, there are still a few slots left on Snack for those wishing to have their regions added to it. Requests should be sent to cdn-test@lindenlab.com. Note that regions should be those with a relatively high texture / mesh count,

The CDN service being used by the Lab is operated by Highwinds Network Group, which the Lab has also been using in support of server-side appearance.

Highwinds supply their CDN service to a broad range of businesses, including a number of games companies such as Valve (Steam), Funcom, Meteor Entertainment, GameFly and Virgin Gaming. They operate 25 centres around the world, with 11 in North America, seven in Europe, 4 in Asia, one in Australia and two in South America, over their own network infrastructure, which they call “RollingThunder”, which  peers with more than 1,600 provider networks worldwide and over 14,000 ASNs, and uses the anycast network addressing and routing methodology.

As I’ve previously reported, one of the biggest issues of chat delays in group chat sessions is to do with the numbers of updates the chat server has to send as people join / leave session and log-in / out of SL (which causes an update to their status in the group member’s list).

Some work has already been carried out in ways to reduce the volume of update messages being sent with the aim of lessening the impact they have on the flow of actually text messages, and Simon Linden is attempting to further refine this work, again with the agin of reducing the volume of update messages and their impact on group chat test messages.

The Server Beta User Group meeting on October 2nd saw a further test of his work in order for him to gather data on the effectiveness of these changes, and feedback on his findings will likely be given at one of the user group meetings next week.