First published in 1952, Charlotte’s Web weaves a story of friendship, hardships, joy and tears. When her farmer father is about to slaughter the runt of a litter of pigs, Fern Arable intercedes and saves the tiny pig, calling it Wilbur. A bond forms between child a pig, but when Wilbur becomes too big to remain with his mother and is shipped off to the farm owned by Fern’s uncle, he is left shunned by the other animals and – with Christmas approaching – once again facing slaughter.

Then he is befriended by Charlotte A. Cavatica, a spider living in the rafters of the barn where Wilbur is kept.Charlotte hatches a plan in order to save him from death, and Wilbur finds himself the centre of new and strange attention…

Join Caledonia at Magicland Park. as she resumes her reading of this tale of friendship, hardship and the miracles which can be found in the simplest of things.

Join Gyro Muggins as he brings us the conclusion of the story which has been hailed as one of Sir Arthur C. Clarke’s best works.

In 1913, American-born Ralph Edwards established a homestead in Bella Coola Valley, British Columbia, and went on tom become famous as a conservationist and the “Crusoe of Lonesome Lake”.

In the early 1930s, following his return to Bella Coola, he was joined by his brother Earle, and sister-in-law Isabel, who came straight from the city of Portland, Oregon on what was supposed to be a vacation visit. However, both of them fell in love with the wilds of British Columbia and decided to move there themselves, settling into a farm near Bella Coola.

Ruffles in my Longjohns is Isabel’s autobiographical account of her pioneering life with her husband, far from all the trappings of “civilisation” in the 1930s and 1940s. It is a firsthand account of homesteading, told with wit, whimsy and panache, the tale of “city girl” living on the frontier in a world of hard-bitten men, and how she coped, told in a loving, personal style.

Join Faerie Maven-Pralou as she embarks on the first part of a reading from this inspiring book. 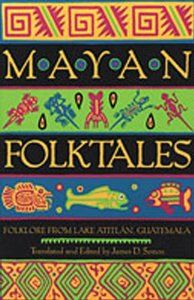 “This collection of folklore offers a rich and lively panorama of Mayan mythic heritage. Here are everyday tales of village life; legends of witches, shamans, spiritualists, tricksters, and devils; fables of naguales, or persons who can change into animal forms; ribald stories of love and life; cautionary tales of strange and menacing neighbors and of the danger lurking within the human heart.

“These legends narrate origin and creation stories, explain the natural world, and reinforce cultural beliefs and values such as honesty, industriousness, sharing, fairness, and cleverness. Whether tragic or comic, fantastic or earthy, whimsical or profound, these tales capture the mystery, fragility, and power of the Mayan world.”

Join Shandon Loring as he reads from this fascinating book on Thursday 11th July.

Please check with the Seanchai Library SL’s blog for updates and additions to the week’s schedule.  Have questions? IM or notecard Caledonia Skytower.

Jo Yardley indirectly pointed me towards another article on Second Life and its past / future and what is going on at the Lab. Written by Susan Karlin, the piece again covers some familiar territory, but also offers-up a light analysis of the platform as well as taking a look at the road ahead.

The first thing to be noted about the piece is that Karlin gets the creative opportunities offered by SL and its the ability to bridge the digital / real-life divide in many unique ways for those who wish to do so.

A slide show at the top of the piece gives a more than fair representation of the platform’s breadth of appeal / promise ability and also its ability to reach through into real life and have real and lasting impact for people – be it the real life relationship which blossomed between Anglo-American couple Damien Fate and Washu Zebrastripe (both now well-known in content creation circles) which led to their eventual marriage and the birth of their son, or the story of Holocaust survivor Fanny Starr, or the work of Beth Noveck, a law professor who served as President Obama’s deputy chief technology officer for open government until 2011 and who used Second Life as an educational platform through her avatar Lawlita Fassbinder.

Within the article, Karlin highlights some of the weaknesses of the platform without feeling the need to dismiss SL in the process. While she rides the wave of LL’s infographic, which highlights the one-million log-ins per month and the 400,000 new sign-ups, she also points out the former has remained on a plateau (“stable”) despite the 400,000 apparently arriving on SL’s doorstep each month, only for around some 80% to turn around and walk away again.

Her quotes from Rod Humble also help provide more of a framework as to why he’s been pushing the Lab in the direction he has over the last two years.

The Lab is constantly chastised not “dealing with lag” or not “improving performance”.  But the reality is, that issues of performance have been a core focus for Humble since the day he arrived at the Lab – and has been so, purely as a result of the feedback from the many who try SL only to leave, a good portion of whom cited “performance” as being a major issue in their exit feedback. In this, Karlin’s piece is timely, as many of the various threads of this ongoing work – interest list updates, HTTP work, SSB/A, and so forth – are just coming out into the open, with the promise of more work to come.

Karlin’s article makes it clear this strategy runs deep. I recently pointed to a comment made by Humble to Benny Evangelista of the San Franscisco Chronicle in which Humble talks in terms of winning back the 30+ million people who tried SL and gave up. In that piece, the comment was couched in the framework of the Lab’s plans for their future endeavours. However, Karlin’s article makes it pretty clear that those 30+ million have been on his mind for a good while now and have been one of the influences which has shaped LL’s strategy and approach to SL.

She also touches on the fact that LL are still committed to the platform despite their move to try to diversify their products portfolio, noting:

The goal is to strengthen Second Life’s core infrastructure, while expanding Linden’s offerings in other types of shared communities … What has always worked–and what Linden seeks to tap into with its other products–is a virtual community that can have as much resonance as in real life … Hoping to tap that enthusiasm, Humble is developing a Linden Lab product line of cloud-sharing interactive community building apps unrelated to Second Life.

Diversifying is, as I’ve said in the past, generally considered a positive move for any company occupying a single-product market space. Yet even before any product had been announced, many in SL immediately denounced the Lab’s planned move to diversify as indicative the company had “given up” on SL or were merely using it as a “cash cow” to serve their new products. Not even strong evidence to the contrary, with the Lab continuing to refine and enhance the platform or the fact it has continued to invest heavily in infrastructure improvements aimed solely at the platform or that it has recruited  / acquired talent outside of the pool of resources working on SL with which to develop their new products, would sway naysayers from this view.

Of course, there is a broader discussion on how actually effective LL’s new products are in terms of promotion and market penetration, but that falls outside of a piece such as Karlin’s.

Some might dismiss this as a “light ” piece, albeit one which attempts to take a step back from the line of the Lab’s message and apply a little more thinking to its coverage of SL True, it doesn’t plumb the depths some of us, as SL users would perhaps like to see, such as issues around revenue and tier. But then, mainstream media probably isn’t any more interested in plumbing those depths than LL is in seeing them explored, so to dismiss the piece purely on these grounds might be a tad unfair.

What is particularly refreshing about Karlin’s article is that it is one in which the writer actually groks the broad creative opportunities it provides and who understands the sheer power of the platform to connect lives. That alone makes it a refreshing read when compared to the tired retreads of “where SL went wrong” and “whatever happened to” pieces all too often rolled out by those is the media unwilling to give the platform a second look.

It’s also good to see someone in the media picking-up on The Drax Files, which makes no fewer than two appearances in the article.